The Special Air Service (SAS) is famous around the world. Its highly trained men are renowned for their skills in covert surveillance, close-combat fighting and hostage rescue. The SAS was created during the Second World War, when small bands of soldiers were dropped behind enemy lines in North Africa and Europe. Since then it has been deployed in most of Britain's wars. The Special Air Service (SAS) has its origins in the North African desert. It was formed as 62 Commando in July 1941 to undertake small-scale raids behind enemy lines. This drew its men from No 7 Commando and also operated under the title L Detachment, Special Air Service Brigade. A brigade was usually made up of around 5,000 men, so this name was a fiction designed to deceive the enemy.

Two months after its formation, L Detachment was renamed No 1 Small Scale Raiding Force. It went on to target enemy airfields and port installations during the North African campaign (1940-43), often working closely with the Long Range Desert Group.

SAS founder Major David Stirling (right) greets a patrol on its return from a mission, 1942

In October 1942, the unit was renamed 1st Special Air Service. The following April it was reorganised into the Special Raiding Squadron and undertook raids in Sicily and Italy alongside the 2nd Special Air Service, which came into existence in May 1943 in Algeria.

The brigade’s formations took part in many operations, frequently behind enemy lines, from D-Day (June 1944) until the German surrender in May 1945. But shortly after the war, the SAS was disbanded.

In 1951, Z Squadron of 21st SAS was deployed during the Malayan Emergency (1948-60). That squadron fought under the name of the Malayan Scouts. In 1952, it was absorbed into the regular Army as 22nd SAS Regiment. This marked the only time a regular unit has ever been formed out of a TA unit. Many of the first volunteers were Rhodesians and New Zealanders.

In 1959, a third SAS unit was formed - again a TA force - known as 23rd SAS Regiment. This was a re-naming of the Reserve Reconnaissance Unit, successors to MI9, whose members were experts in escape and evasion. SAS troops help safeguard the ruling regime and its oil by fighting a guerrilla war against communist rebels in the barren hills and deserts of southern Oman.

SAS units carry out covert operations against Arab nationalists in Aden city and against rebel tribesmen in the mountainous Radfan region.

The SAS carry out several surveillance operations and ambushes against Republican terrorists in Northern Ireland.

An SAS unit rescues 19 hostages held by armed terrorists from the Iranian Embassy in London.

SAS troops conduct covert surveillance of Argentine positions prior to the British landing and attack the Pebble Island air strip.

Warrant Officer David Harvey, who was engaged in covert surveillance in the Falklands, with fellow SAS troops, 1982

How long did it take for the SAS to storm the Iranian Embassy and free the hostages?

The operation began at 7.23pm on 5 May 1980 and ended at 7.40pm. The SAS rescued 19 hostages and killed five of the six terrorists. One hostage was killed during the rescue.

SAS units served during the Gulf War (1990-91) where they were assigned to hunt down and disarm mobile missile units. The regiment returned to Iraq in 2003 after being deployed on hostage rescue missions in Sierra Leone (2000). The SAS was also heavily engaged against the Taleban in Afghanistan (2001-14).

SAS troops having been dropped by helicopter into an Afghan valley, c2006

Explore the history and collections of the Special Air Service by visiting Airborne Assault, the museum of the Parachute Regiment and Airborne Forces. 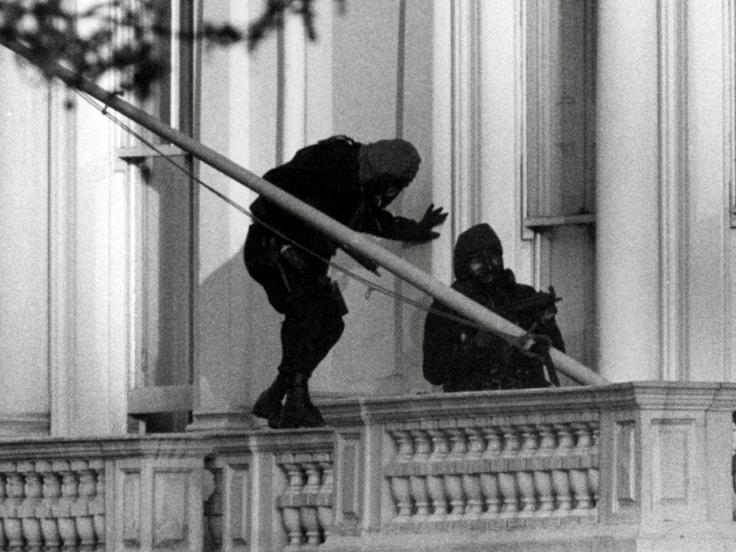 Lieutenant-Colonel 'Paddy' Mayne is a legendary figure in the history of the Special Forces. A celebrated sportsman with a turbulent character, he played a vital role in the early successes of the Special Air Service (SAS), becoming one of its most important commanders.

As the co-founder of the Special Air Service (SAS), Lewes played a vital role in establishing the unit’s ethos and high standards of training and discipline.