The National Army Museum has a fascinating collection of 345 portrait miniatures, or ‘paintings in little’ as they were called until the 17th century. Our recent research on this collection, most of which has never been on display, has revealed new information about artists and untold stories about some of the subjects they portrayed.

As the name suggests, miniatures are usually of a scale that can be held in the palm of the hand. Many are oval, framed in gold and with suspension loops so that they could be worn or carried. Some are fixed into velvet-lined, leather carrying cases which could be propped up on a table to display the portrait of a loved one.

These small paintings are often fragile - miniatures painted in watercolour are at risk from exposure to light, and those painted on ivory from changes in temperature and humidity. Because few of them have been on display in the museum, they have not been examined in depth before.

Miniature portrait in watercolour on ivory of an unidentified officer of Fencible Cavalry by George Engleheart, c1800

A lock of hair set into the back of the miniature by Engleheart, c1800

Examining all 345 miniatures in detail has enabled us to identify many of the sitters or to narrow down which regiments they served in. Close examination with a magnifying glass has revealed some tiny inscriptions and signatures. Studying the works alongside each other has also enabled us to identify the artists of some of them, based on style.

Usually painted for the sitter’s loved ones, miniatures were treasured personal mementoes.

They were often commissioned as gifts for parents or wives when an officer was sent to serve abroad, sometimes for many years without leave to return home.

A few of the miniatures are held in decorative gold and enamel frames, with elaborate plaits and curls of hair set into their backs.

The collection also includes a few portraits of the wives of officers, given as parting gifts. One of these has a bracelet made of the sitter’s intricately plaited hair.

Miniature portrait on ivory of a woman thought to be Susannah Eveleigh, unknown artist, c1785

As photography became more common in the 20th century, there was a decline in the trade in miniatures. However, a few were painted posthumously, based on photographs. They were commissioned by families as a memorial and a focus for grieving.

Major Richard Le Brun Nicholson of the Cheshire Regiment had enlisted in September 1914 and was awarded the Military Cross (MC) ‘for conspicuous gallantry’ in August 1917. In July 1918 he won a second MC for showing ‘powers of command of a high order’, but was killed in action on 31 August aged 23.

This portrait is based on a photograph of Nicholson which was included in a Roll of Honour published in ‘The Illustrated London News’ on 28 September 1918.

Due to their cost, most of the miniatures in the collection depict officers. However, miniatures in watercolour on paper were cheaper than those in oils on ivory.

Private Henry Longden of Prestbury near Macclesfield enlisted in the Royal Regiment of Horse Guards in 1828, aged 22. This portrait of him was painted on 16 July 1830, the day after his regiment was on duty at King George IV’s funeral at Windsor Castle.

Longden was later promoted sergeant (corporal of horse in the Household Cavalry) in June 1831.

He married the following year, but died in 1835 of consumption (tuberculosis) in Hyde Park Barracks, aged 29.

One interesting discovery was a pair of portraits of a father and son - Brigadier-General Francis Gleadowe Stone, previously dated to about 1917, and his son, Robert Graham William Hawkins Stone (later a lieutenant-general) as a young boy, dated to about 1898.

The portraits are clearly by the same artist, of the same format and framed identically, so it is likely that they were both painted at the same time. It was unusual for the museum to collect a portrait of a child, even if he did have military service later.

It transpires however that in 1902 and at the age of just 12, Robert accompanied his father to South Africa to fight in the Boer War (1899-1902). The wife of Francis, and mother of Robert, Celine Stone (née Cloete) was born in the Cape of Good Hope, so there was a family connection with South Africa.

Despite his age, Robert enlisted in the Aliwal North District Mounted Troops and served in the last six months of the war, for which he was later presented with the South Africa Medal.

When he returned to England, Robert continued his education at Wellington College before passing out at Sandhurst with a medal for being the ‘Most Distinguished Cadet of the Season’. He was commissioned into the Royal Engineers in 1909.

During the First World War he was mentioned in despatches four times, awarded the MC in 1917 and the Distinguished Service Order in 1919; he was also badly wounded. After the war Stone served in India and the Sudan.

During the Second World War he was mentioned in despatches four times and knighted. From 1942 he was General Officer commanding British troops in Egypt during the Western Desert campaign. Stone retired in 1947 with the rank of lieutenant-general.

It is likely that the portraits of father and son were painted for Stone’s family as mementoes before they set off to war and the boy started his long and successful military career.

We are adding our portrait miniatures to Art UK, a website which aims to enrich people's lives by showcasing artworks in public collections. The miniatures each hold an individual story of service in the Army, so it's a great opportunity to bring them to wider public attention.

We have previously added information and images of 654 oil paintings to Art UK. 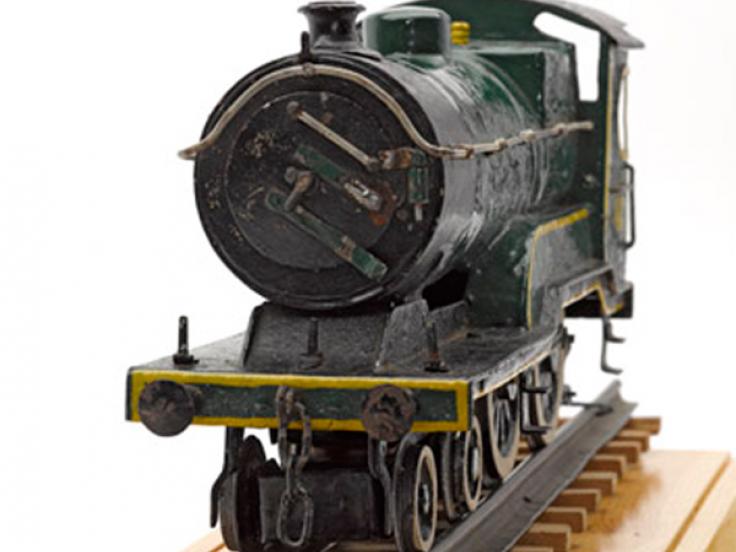