One of the most famous counter-terrorism operations in British history took place in May 1980. Gunmen overran the Iranian Embassy in London and took hostages. After a tense siege, the crisis was resolved when the building was stormed by the Special Air Service in front of the world's media.

Special Air Service troops preparing to abseil from the roof of the Iranian Embassy, 5 May 1980 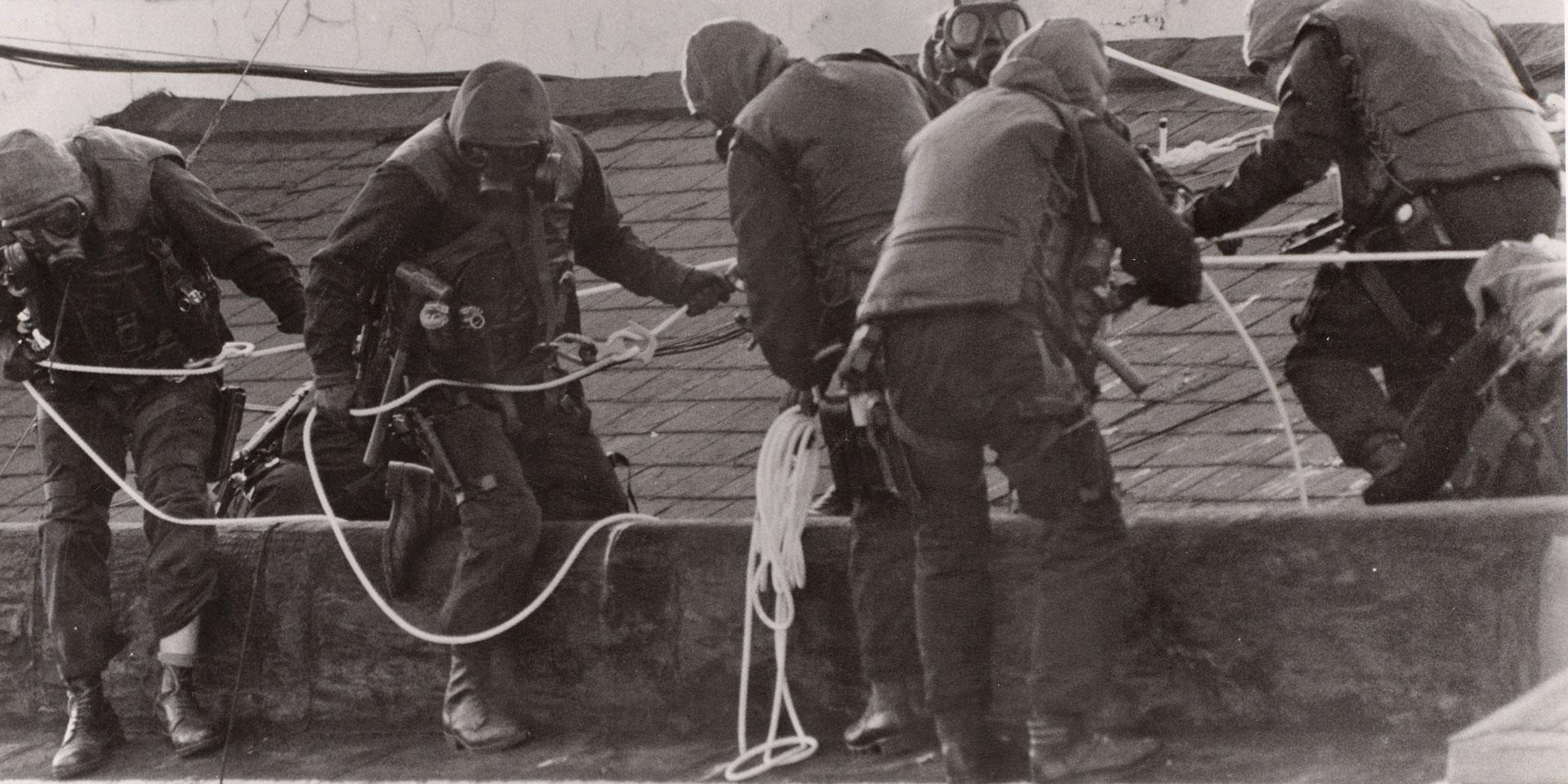 Special Air Service troops preparing to abseil from the roof of the Iranian Embassy, 5 May 1980

At 11.30am on 30 April 1980, six armed members of the Democratic Revolutionary Front for the Liberation of Arabistan (DRFLA) stormed the Iranian Embassy on Princes Gate in South Kensington, London, taking 26 people hostage.

The DRFLA had been involved in an Arab uprising in the southern Iranian province of Khuzestan following the Iranian Revolution of 1979. The group was still fighting for that region’s autonomy and seeking the release of prisoners captured during the rebellion.

Until that time, the SAS was almost completely unknown to the general British public. But that was about to change.

Former SAS commander General Sir Peter de la Billière outlines how the unit's domestic counter-terrorism role had been established prior to the 1980 siege. Interviewed in 2015.

Six terrorists storm the Iranian Embassy, taking 26 hostages and demanding the independence of Khuzestan, a region in southern Iran.

Police are on the scene immediately and surround the building. Journalists and cameramen quickly arrive to report on the action.

The hostage-takers demand the release of 91 Arabs imprisoned in Khuzestan. They threaten to blow up the embassy if their demands are not met by noon the following day.

The government convenes an emergency committee meeting (COBRA), which includes Brigadier Peter de la Billière, the Director of the SAS.

Two sick hostages are released. One provides intelligence to the police, who continue to negotiate with the terrorists. The gunmen demand safe passage out of Britain.

The gunmen threaten to kill one of the hostages, the Iranian cultural attaché. They also insist that their demands are televised. Although the police and the BBC agree, the gunmen are angry about their negative portrayal.

An embassy caretaker briefs the SAS. It becomes clear that the front door and windows are too heavily armoured to be smashed in by physical force alone.

The Foreign Office asks Arab ambassadors to talk to the hostage-takers. However, the ambassadors believe negotiations will fail if the terrorists aren’t offered safe passage out of the country.

The terrorists’ leader, Salim, suspects an assault is imminent due to a suspicious bulge in a wall caused by the planting of listening devices. But hostage PC Trevor Lock manages to calm him down.

At 1pm, the gunmen threaten to kill a hostage, if an Arab ambassador is not provided for them to talk to. At 1.45pm, three shots are heard.

At 3.50pm, the government orders Colonel Rose to prepare an assault. By 5pm, two teams are in position. It is still unclear at this point whether a hostage has been killed or not.

At 7pm, the body of cultural attaché Abbas Lavasani is pushed out of the embassy. Fearing for the hostages' lives, the government orders an SAS assault at 7.07pm. 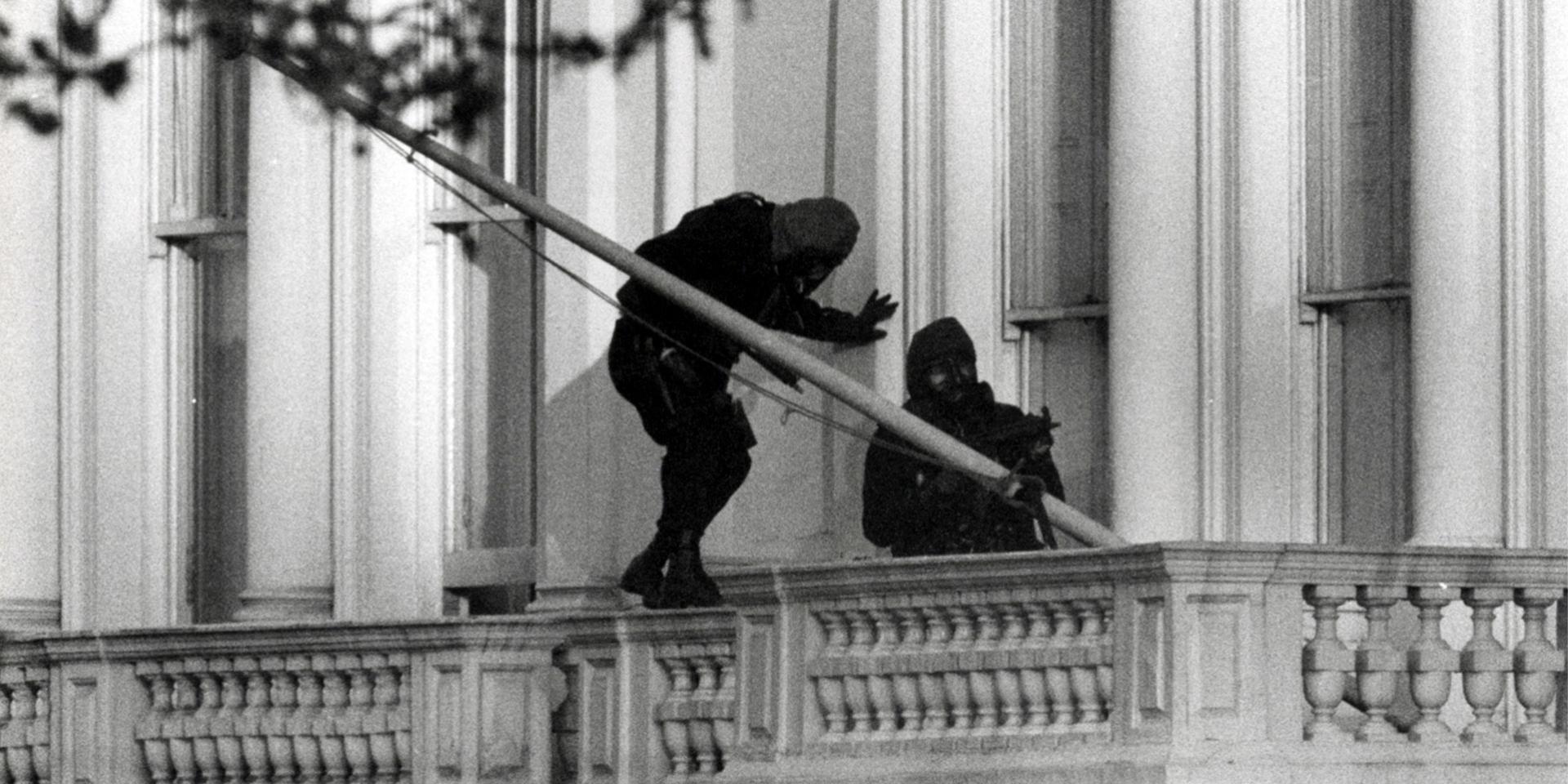 The involvement of the SAS in domestic law enforcement was something of a last resort. It only took place after the Home Office had formally requested support for the police from the Ministry of Defence.

During the 1980 siege, the regiment operated under close government supervision via the Cabinet Office Briefing Room A (COBRA), Britain's crisis management command. It also worked in full partnership with the police.

Once the operation was over, the police assumed full authority over the crime scene. Indeed, after the 1980 siege, several SAS soldiers involved were interviewed and questioned by detectives in order to establish that the force used was lawful.

Although the terrorists released several sick hostages during the crisis, on Day 6 they killed a captive, believing their demands remained unmet. Following threats that they would shoot more, the British government ordered the SAS to carry out a rescue mission - codenamed Operation Nimrod.

On 5 May, multiple teams of SAS soldiers assaulted the building, one group in full view of the assembled press. In 17 minutes, after a fierce firefight, the siege was over and 19 hostages had been freed. All but one of the terrorists were killed.

The surviving gunman, Fowzi Nejad, was later convicted of conspiracy to murder, false imprisonment and two charges of manslaughter. He was released from prison in 2008 after completing his sentence.

The SAS receive the order ‘Go! Go! Go!’ On the roof, one team abseils down the rear of the building, but a soldier gets entangled in ropes and a window is broken. The gunmen realise an assault is beginning.

With a colleague dangling from his ropes, the team at the rear ground floor cannot use their explosives. They instead smash their way in with sledgehammers.

At the front, another team crosses from an adjacent balcony and detonates frame charges against the armoured windows. They throw in stun grenades and enter the building, which is soon ablaze.

On the first floor, PC Lock wrestles with Salim, who is then shot by the SAS. Elsewhere in the building, one hostage is killed and two others injured in the firefight, before the terrorists are killed.

The SAS evacuate the hostages down a staircase, but another gunman - armed with a grenade - conceals himself amongst them. The SAS spot him, consider the threat he is posing to the hostages, and shoot him.

The hostages are led outside to lie down with hands bound. The last remaining gunman, Fowzi Nejad, is discovered hiding amongst them. He is quickly removed and arrested.

The assault ends. Control of the situation and area passes back to the police. Inside COBRA, there is cheering and great relief as a higher death toll was expected.

Corporal Robin Horsfall on the equipment, training and professionalism required to complete a successful operation. Interviewed in 2017.

'It is highly probable that those involved will receive awards for bravery as a result of Monday’s action. But there will be no citation… to have "beaten the clock" is satisfaction enough for the men of Britain’s most private army.'

The SAS storm the burning embassy's windows, 5 May 1980

The deadly efficiency of the rescue operation, some of which was played out on national television, contributed to the legendary status of the SAS. The images of daring soldiers dressed in black tactical clothing and gas masks became symbols of the prowess of British Special Forces.

The siege also awakened public interest in the Special Forces, its history and operations. This led to an explosion of newspaper articles, books, documentaries and films about the SAS, and other mysterious units, such as the Special Boat Service, that continues to this day.

Corporal Robin Horsfall discusses the public impact of the SAS operation. Interviewed in 2017. 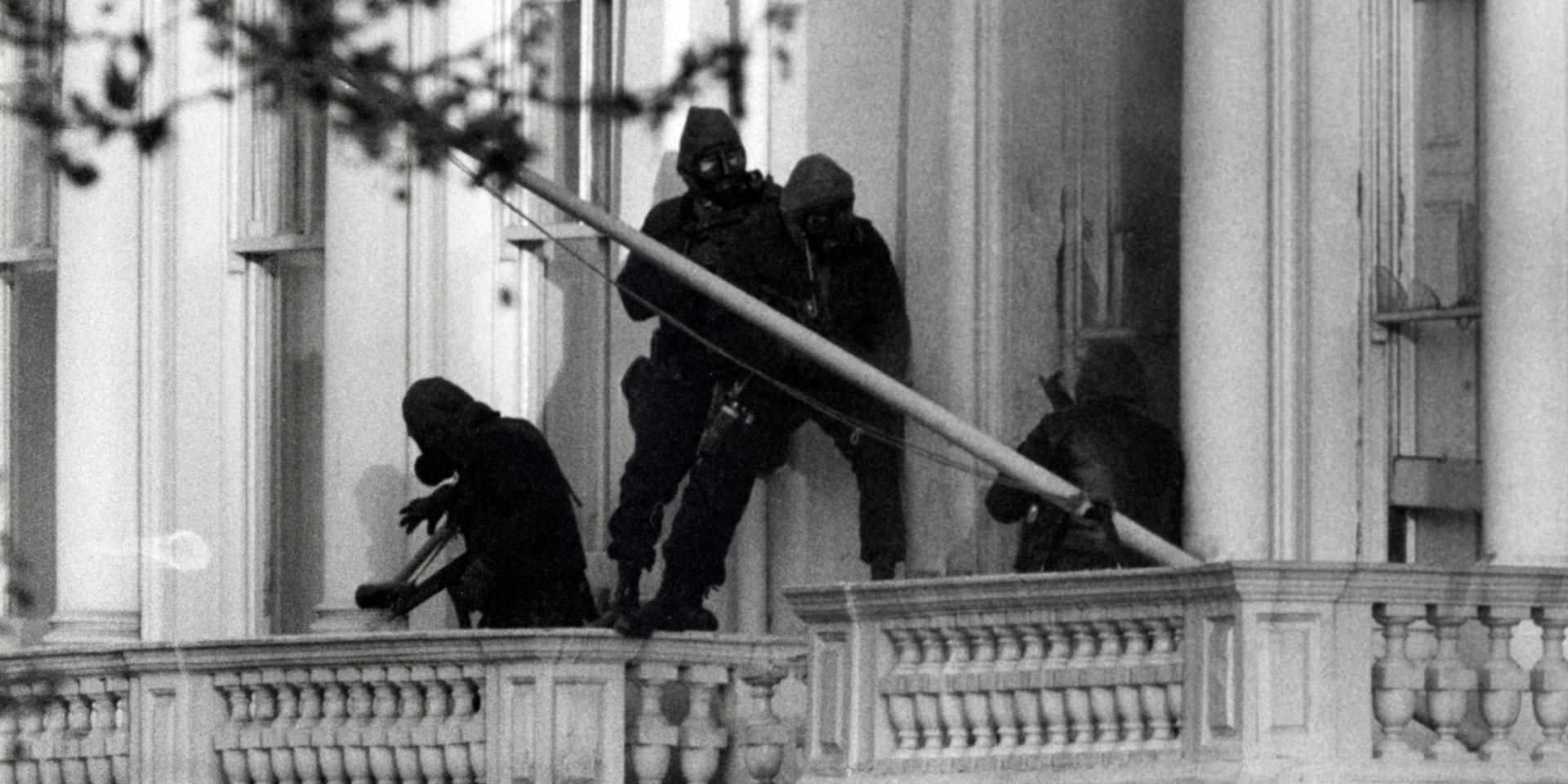