Sport has always played an important role in the British Army, in keeping soldiers fit and in encouraging recruitment. But sporting contests also fostered faith in the regiment or corps, reinforced group identity and made soldiers ready to serve a shared cause even in the most difficult circumstances. 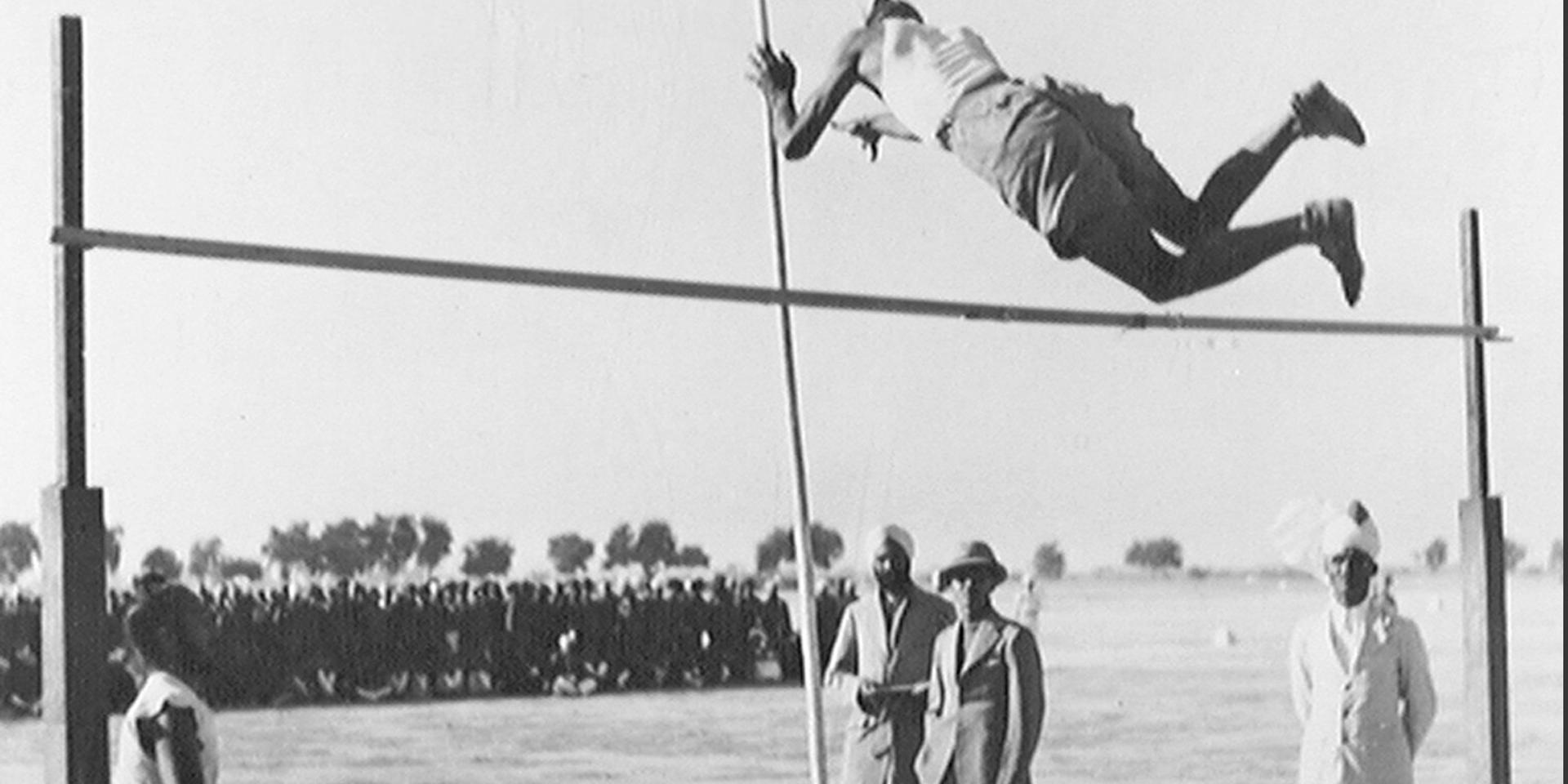 British Army sports fostered faith in a soldier's unit, reinforced group identity and made soldiers ready to serve a common cause. They also bridged the gap between officers and men, who often had little else in common.

The shared experience of playing and watching sport was crucial in developing 'esprit de corps' - feelings of pride and confidence among the members of a regiment.

Competition between combined British Army teams and their Allied and Commonwealth equivalents reinforced a larger shared identity above and beyond that of the regiment, as seen in the Inter-Allied Athletics Championship held in Berlin in 1946.

Such sporting links were especially important in times of war, when British soldiers were fighting alongside troops from these countries.

Cricket ball used in the 'Ashes in the Desert' between Australian and British troops, 2006

Yet sport was used not only to encourage a sense of military cohesion. The Army command realised that it could also relieve boredom, provide a distraction from the horrors of war and keep men away from the tavern and the brothel.

As such, it played an important role in maintaining discipline. It also helped troops to relax during times of stress. Sporting contests were even held in front-line areas and behind the wire in prisoner-of-war camps.

The British Army has also used sport in its rehabilitation of wounded service personnel, helping them to regain confidence and fitness and thus return to an active life.

But some sporting pursuits were not always accessible to the rank and file. At times there were also restrictions on who could compete against whom, and which sports were suitable for certain personnel.

Shooting competitions were just the kind of sporting diversions that met with official approval in the British Army. This contest was organised for soldiers serving in the Crimean War (1854-56).

Different matches took place, including inter-brigade contests and a match open to all battalions and corps, each of which were allowed to send two men as representatives.

The British Army has a rich rowing tradition and several soldiers have represented their nation at the sport. Most regiments had rowing teams.

Here the rowing eight of 3rd County of London Yeomanry (Sharpshooters) are depicted setting off for a race on the River Thames during the 1938 Henley Regatta.

Keeping troops occupied and out of trouble was an ongoing problem for the authorities. Eager to distract men from drink and prostitutes, senior officers recommended a range of sporting activities, including cricket.

Such were the supposed moral and character-building powers of the game that in 1841 General Sir Rowland Hill, Commander in Chief of the British Army, ordered that a cricket ground be built in every military barracks in the country.

Shrapnel from a 107 mm rocket removed from the outfield at Basra, 2006

Cricket is still played to raise morale. A match between English and Australian soldiers occurred in October 2006 in Basra, Iraq.

Undertaken to mark the Ashes Test series, the match ended with a victory for the Australians.

Played on coconut matting surrounded by desert, at one stage the game had to be held up while a spent Chinese 107mm rocket was removed from the outfield! 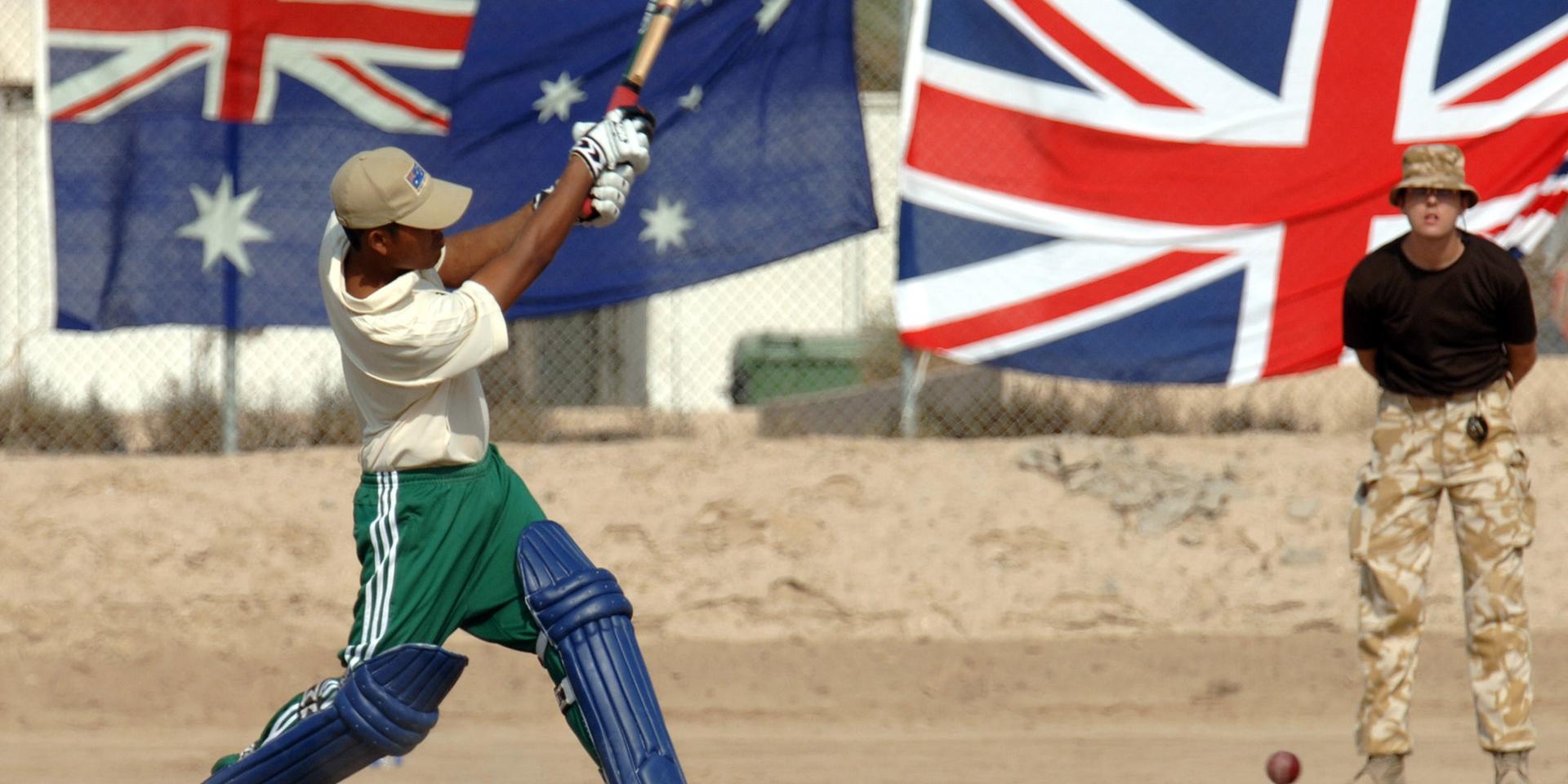 Over two million men in the British and Commonwealth armies were wounded during the First World War. Improvements in artificial limbs, plastic surgery, facial reconstruction techniques and psychiatry brought some relief to them, but sport also played a role in their rehabilitation. Pursuits like wheelchair croquet helped veterans regain confidence and a degree of fitness. However, many men were left to fend for themselves with little financial or social support from the state.

The rehabilitation of wounded soldiers improved after World War Two (1939-45) and greater efforts were made to encourage disabled veterans to take part in sporting contests.

During the 1948 Olympic Games in London, Dr Ludwig Guttman of Stoke Mandeville Hospital, organised a sports competition for British servicemen with spinal injuries. This 'International Wheelchair Games' was the precursor of the modern Paralympic Games. The mascot for the London 2012 Paralympics was called 'Mandeville' in honour of Dr Guttman's pioneering work. Since 2014 the Invictus Games have continued this tradition.

Today, the Ministry of Defence's rehabilitation programme for wounded service personnel is based at Headley Court in Surrey. Known as 'Battle Back', it aims to ensure that the seriously injured have access to the same opportunities in sport that are currently available to the able bodied. The scheme has strong links with the British Paralympic team and identifies wounded personnel who show a talent for a particular sport and who may benefit from inclusion in Paralympic Development programmes.

The Invictus Games are an international sporting event for wounded, injured and sick servicemen and women. The inaugural meeting of the games in 2014 featured over 400 competitors from 13 nations. The games were held in London's Queen Elizabeth Olympic Park. Sports included wheelchair basketball and rugby. The event was strongly supported by serving soldier Prince Harry.

'The games will demonstrate the power of sport to inspire recovery, support rehabilitation and demonstrate life beyond disability’. Prince Harry launching the Invictus Games, 2014 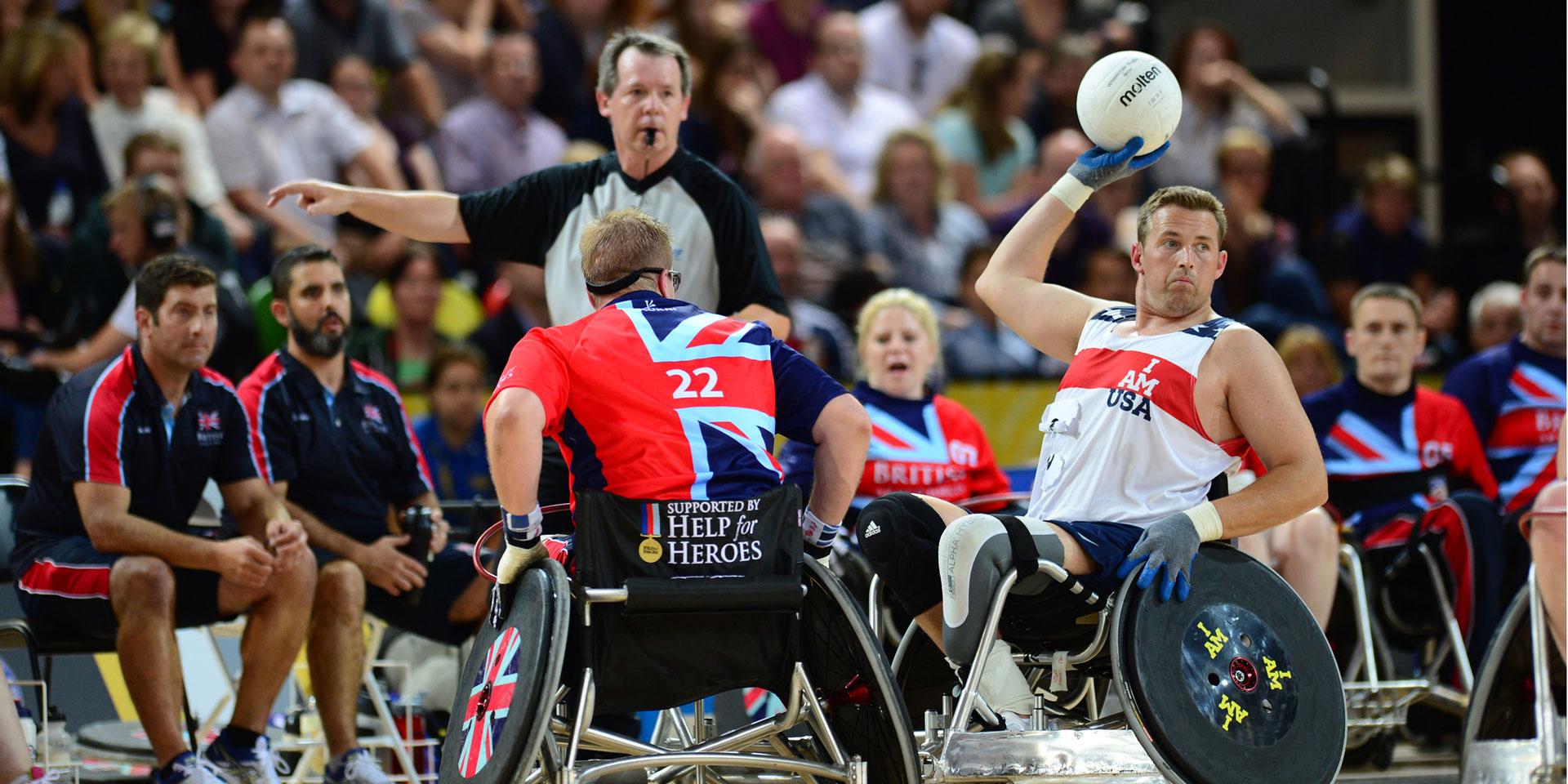 Sporting activities kept prisoners of war physically fit and staved off boredom. Playing and watching inter-regimental sports was especially important as it reminded men of their loyalty and duty. Games and contests were usually organised by the prisoners themselves, although their captors sometimes supplied equipment, as did the Red Cross.

During World War Two prison camps for officers and certain NCOs, who did not have to work according to the Geneva Convention, saw the most sporting activity. The majority of the rank and file, however, found themselves working for the enemy, so had fewer opportunities to engage in sporting pastimes.

Athletics medal awarded to Lieutenant A Fry of the 4th Australian Pioneer Battalion when he was incarcerated at Freiburg-im-Breisgau camp in Germany, 1918

During much of the Army’s history sports participation was segregated by rank. Officer sports were quite different from non-officer sports. For many years the officer corps was largely closed and static, composed of aristocrats, the landed gentry and the upper middle class.

Rates of pay were relatively low, so officers needed a private income to fund their service and activities. Officers typically had an equestrian background of hunting and racing so gravitated naturally towards sports like polo and tent-pegging.

These sports were inaccessible to the rank and file who lacked the necessary cash. The division existed at the very highest levels. Until 1956 only officers were allowed to compete for Great Britain in Olympic equestrian events.

‘Never played polo. Wasn’t allowed to... Oh! You were down there! They was up here! Yes, only officers played polo. Football was good enough for us.’ Sergeant Charles Wildman, 21st (Empress of India’s) Lancers, 1991

For many years there was also a ban on British and Indian troops competing against each other. In 1909 the Army Sport Control Board (ASCB) India declared that a ‘British team shall not compete against an Indian team, nor shall it include any of its Indian personnel in its team, in any competition held under the auspices of the ASCB India’.

After World War One things gradually changed, largely due to the ‘Indianisation’ of the Indian Army’s officer corps. Native officers could now play alongside their British counterparts within Indian units. Reform continued and eventually Indian Army teams were playing against British Army teams. By the 1920s personnel from all ranks were allowed to represent Indian Army teams.

The high command had also encouraged female participation in sport ever since the formation of the Women's Army Auxiliary Corps in 1917. But for many years there were restrictions on which pursuits were available to women in the Army.

Many senior officers believed excessive physical activity would render women ‘sexless’ and ‘sterile’. They therefore recommended sports that were considered ‘suitable’ for women, such as tennis, cricket, archery, badminton, hockey, netball and swimming.

Today, there are no such restrictions. Women in the British Army can choose to take part in all kinds of leisure pursuits, including those activities traditionally viewed as ‘male sports’, like rugby and boxing.

Football team of the 20th Duke of Cambridge's Own Infantry (Brownlow's Punjabis), 1920

In the past, the Amateur Athletics Association (AAA) regularly barred athletes if they had previously competed for financial rewards, no matter how small. In Army circles, this rule mainly affected other rankers and non-commissioned officers.

Most officers could afford to compete purely for fun and were thus still eligible for AAA events. It was only in the years after World War One that these restrictions were relaxed. 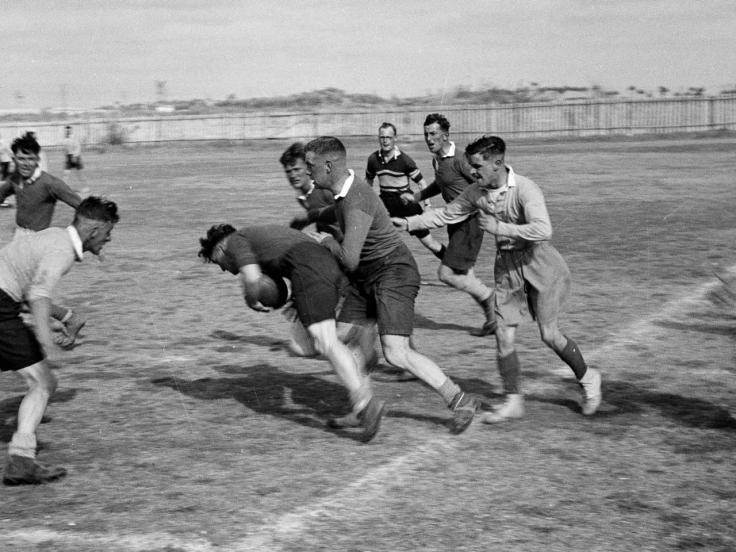 Although factors like patriotism, financial security and the chance to travel have persuaded men and women to enlist, sport has also played a major role in British Army recruitment. 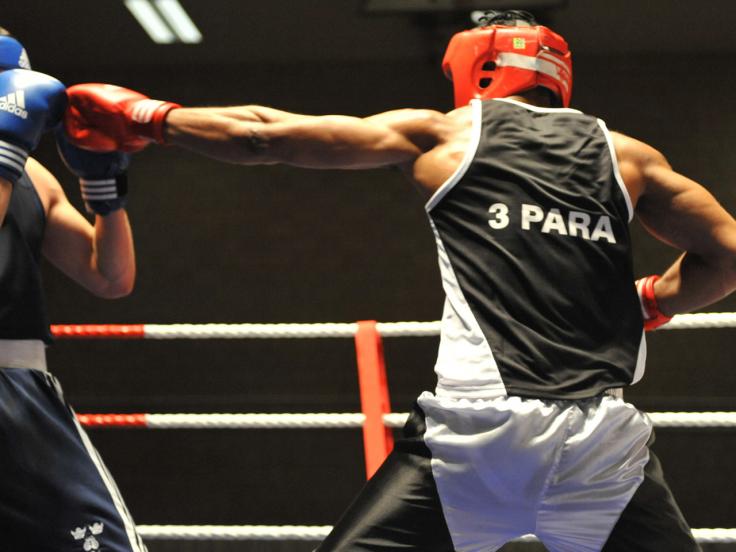 The British Army has long believed that sport prepares men and women for combat by increasing fitness, channelling aggression, and instilling discipline.

The Army’s impact on sport 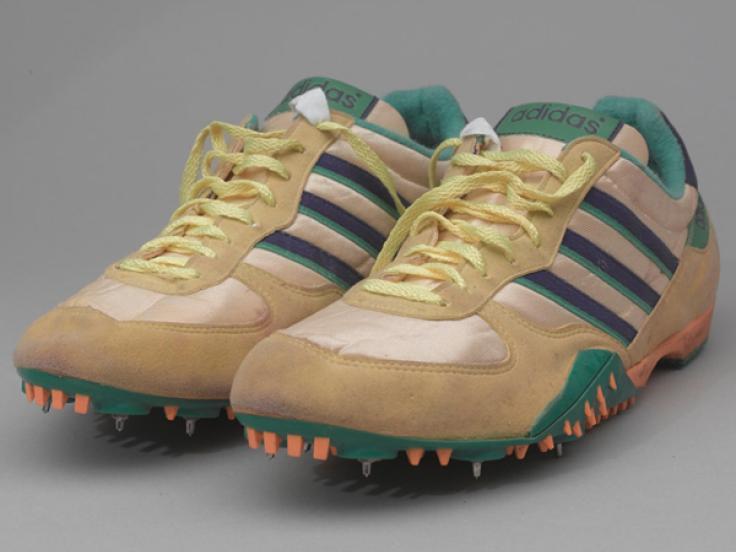 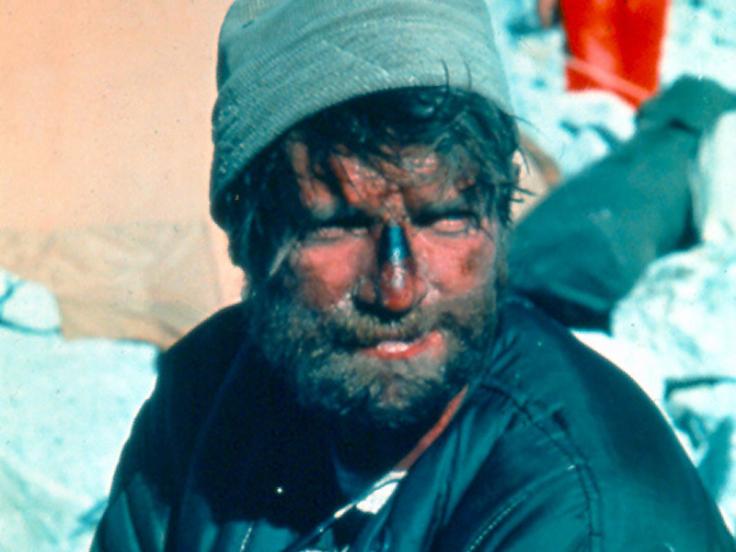