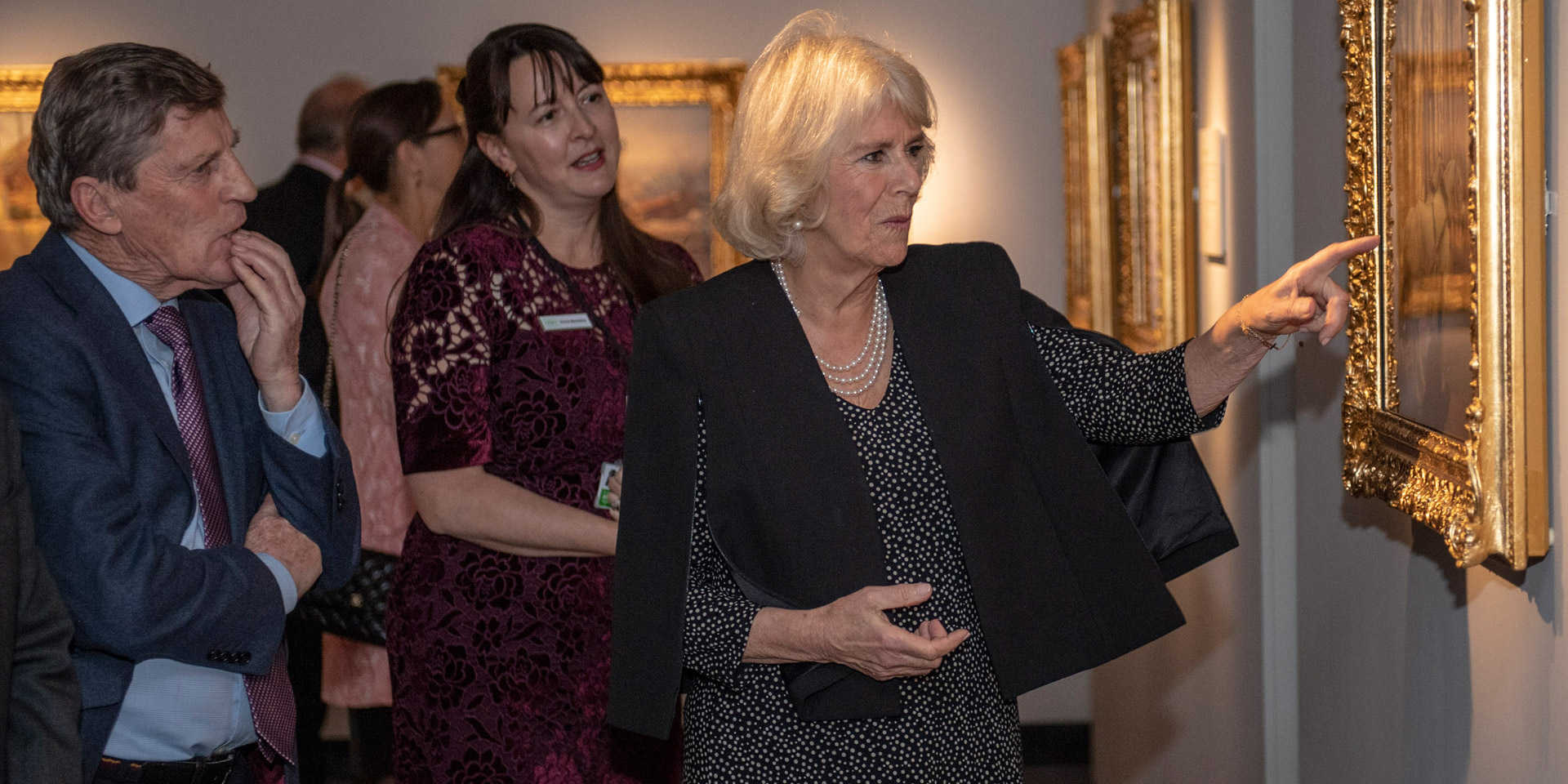 The National Army Museum welcomed Her Royal Highness, The Duchess of Cornwall this evening (5 December 2018) to view its latest exhibition, Alfred Munnings: War Artist, 1918. This collection of Munnings' wartime work was last seen together at the Royal Academy of Arts in 1919. Since then, it has largely been kept in storage in Canada.

The 41 paintings on loan from the Canadian War Museum have been brought back on public display thanks to the assistance of The Munnings Art Museum, as well as the generosity of The Beaverbrook Canadian Foundation. Munnings was commissioned to paint the Canadian Expeditionary Force by Lord Beaverbrook who set up the Canadian War Memorial Fund in order to document and memorialise the Canadian war effort at home and overseas.

Covering a number of themes, the exhibition shows Munnings' emerging mastery of equine subjects, portraiture and pastoral landscapes. His wartime artwork displays the skill that led to him securing admittance to the Royal Academy of Arts in 1919 and contributed to his role as one of England's most celebrated equine artists. The exhibition is locally supported by Juddmonte and supplemented with works from the National Army Museum's own collection relating to Brigadier-General Jack Seely, who commanded the Canadian Cavalry Brigade through much of the war.

The Duchess, who is known for her love of horses, joined a small group for a tour of the exhibition to see the vibrancy and beauty of Munnings work at war. The Duchess was accompanied by Emma Mawdsley, lead curator for the exhibition at the National Army Museum, as well as Brough Scott MBE, broadcaster, former jockey and grandson of Major-General Jack Seely. Seely was the first to be painted by Munnings in 1918, astride his famous horse Warrior, a portrait that forms part of this exhibition.

The Museum's Director, Justin Maciejewski DSO MBE, was pleased to have the opportunity to welcome Her Royal Highness, saying: 'It's a privilege to show this extraordinary work to The Duchess of Cornwall, who knows very well the historic role of cavalry in battle and their continued relevance in today's Army.'

About The Beaverbrook Canadian Foundation

As part of his legacy Lord Beaverbrook set up two charitable Foundations bearing his name. The Beaverbrook Canadian Foundation, established in 1960, is a charitable foundation located in Montreal, Quebec and is proud to support selected organisations, predominantly in New Brunswick, in the areas of education, the arts and culture. Together with The Beaverbrook Foundation, based in the UK, the Foundations have made donations to over 900 charities in the last 60 years.

About the Canadian War Museum

About The Munnings Art Museum

The Munnings Art Museum is at Castle House, the former home and working studio of Sir Alfred Munnings in Dedham, Essex. After Munnings’ death in 1959 the house, with all its contents, was opened as an art museum by his widow, Violet, Lady Munnings. Today, the museum presents changing displays of the artist’s life work as well as special themed exhibitions.

Juddmonte is one of the world’s leading breeders of thoroughbred horses, and has to date bred over 100 individual Group/Grade 1 winners of over 200 Group/Grade 1 races, including 25 Classic winners. All its homebred progeny are raced in Khalid Abdullah’s famous green, pink and white colours. Juddmonte has farms in the UK, Ireland and the USA, standing its European stallions at Banstead Manor Stud near Newmarket, England, and its US stallions in Kentucky, USA. Its current roster of stallions includes world champions Frankel, the highest rated horse since records began, and Arrogate, the highest earner in horseracing history.