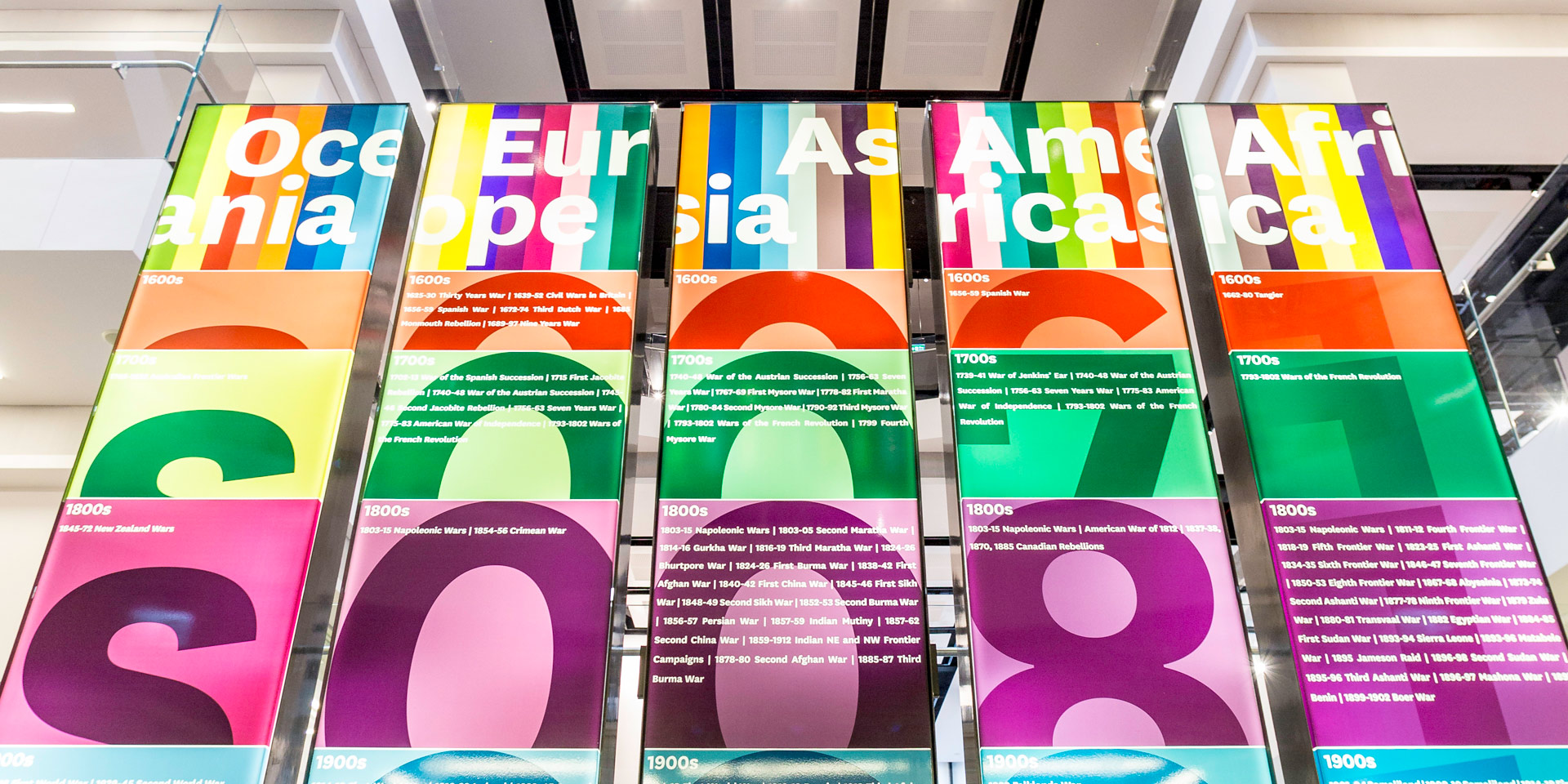 Today, the National Army Museum has unveiled its dramatic transformation following the three-year £23.75 million re-development, including £11.5 million from The National Lottery.

Designed with architects BDP and exhibition design agency Event, the bright new Museum maximises access and engagement with the Collection, providing a 21st century visitor experience. Aiming to be a bridge between the British Army and the public, the National Army Museum will encourage greater public engagement with ideas of defence and security, openly asking questions to visitors and displaying responses on large screens inside the Museum and on the website.

In the new permanent thematic galleries - Soldier, Army, Battle, Society and Insight - over 2,500 objects are on display, two thirds of which are on public display for the first time. The 500m² temporary exhibition space opens with War Paint: Brushes with Conflict, displaying over 130 paintings and objects. Completing the Museum is the Templer Study Centre, Learning Centre, brand new café, shop and Play Base, where children aged zero to eight can learn through play.

Janice Murray, Director General of the National Army Museum said ‘After three years of closure we are eager to reopen the doors to the National Army Museum. The bright new atrium and galleries allow our collections to be shown in a vast number of ways and have been able to give a wider perspective on the Army’s history. The stories in the Museum are universal, they come from individual men and women, and from an institution we are all accountable for. We invite visitors to come and question their British Army both past and present and find out more about its role in our lives.’

Sir Peter Luff, Chair of the Heritage Lottery Fund, said ‘The National Army Museum is quite literally transformed.  It’s always been a great place to learn about the British Army’s role in military and civilian life but it now has an inspiring new energy and purpose. The clean, spacious design should please regular visitors and also attract a whole new audience.  We're sure this will include many National Lottery players who have made such a big contribution to the site’s redevelopment.’

On entrance to the new National Army Museum visitors encounter a series of large screens showcasing the history of the British Army through its campaigns, and depict the evolution of warfare. Suspended above, a fabric installation inspired by the ribbons on medals a series of screens show the men and women soldiers who have fought, placing the story of the soldier at the heart of the Museum. At the centre of the atrium Anna Redwood’s Desert Rat, a 10ft tall sculpture made of metal vehicle scraps from Afghanistan, draws visitors down to Insight gallery.

Insight gallery examines the impact the British Army has had around the world, the many different countries it has interacted with, and the cultures it has encountered. Intended as a regularly changing exhibition, the gallery’s opening displays look at the army’s connection with Germany, Scotland, the Punjab, Ghana and Sudan. Created with the help of British communities from each location, films show reactions and discussion about the countries relationship with Britain, the army and the objects within the Museum’s Collection, such as a Nazi Car Pennant and a Chakra, or Fortress, Turban.

The Ground Floor Soldier gallery draws on the abundance of individual stories contained within the National Army Museum’s Collection and archive. It brings to life displays of personal and often inspiring objects that explore the physical and emotional experience of soldiering throughout the army’s history. Showing that while the army may be almost 400 years old, the thoughts, feelings and human experience of soldiers remain remarkably similar. On entering visitors are asked ‘could you be a soldier?’ They are then taken on a soldier’s journey from joining-up and training to daily life and then returning home, before being asked the same question as they exit.

Large interactives ask visitors to engage with a series of tests, such as a marching drill. In the centre of the gallery Action Theatre is an immersive video and sound projection that engages visitors with the experience of serving on the front line throughout history. Objects in the gallery include Crimean Tom, a cat found during the Crimean War and brought back to Britain as a pet; the Welsh flag which formed part of the memorial of a soldier who was wounded in Afghanistan in 2009 and later died in hospital; and James McGuire’s Victoria Cross, which he received for gallantry during the Indian Mutiny but lost when he was convicted of stealing his uncle’s cow.

Army gallery charts the history of the army as an institution. It explores its origins in the chaos of the British Civil Wars, its major role in the political development of the country and its impact on global history. It looks at the make-up of the army, the people that have served in it, and explains the hierarchy and systems it uses. Finally, the gallery looks at how the British Army tries to remain relevant through technological and social change.

Visitors are able to explore how the army has adapted and evolved in the face of political and popular policy, changing circumstance and innovation to remain effective and achieve its objectives. The international story of the British Army is told through a central uniform display that includes Lawrence of Arabia’s robes and dagger and Her Majesty the Queen’s Women’s Royal Army Corps uniform. Portraits of Oliver Cromwell and Khudadad Khan VC (the first Indian Solder to win the Victoria Cross), sit alongside the first official representation of black soldiers in the army on the Regimental Colour of the West Indian Regiment.

Battle gallery explores the British experience of battle from the 1640s to the present day. Four distinctive sections – the age of horse and musket (1640s-1840s), the age of rapid fire (1840s-1900s), total war (1914-1945) and modern warfare (1946-today) – show how tactics evolved and technological development changed the course of battles fought by the British Army.

Passing a large display of the British Civil War, visitors can experience the rawness of battle in the age of horse and musket and learn to drum a battle command. The Battle of Waterloo is brought to life with a new multimedia interpretation of the Siborne Model that enables visitors to investigate both the model and famous battle. Visitors then enter Total War where they encounter an immense gun case that dramatically displays the development of weapons in the First and Second World Wars. An interactive tank allows visitors to experience the teamwork and skill involved in heavy weaponry. Drones, surveillance and counter-insurgency conflicts go on to characterise the modern warfare section.

Finally, a large wall of magazines, posters and cultural ephemera mark the entrance to Society gallery. Society uses objects, artworks and personal testimony to examine the army as a cultural, as well as military force. Half of all objects in this gallery are displayed for the first time, and reveal the army’s impact on our customs, values and choices. From films, literature, toys and music we create or grow up with, to how the army impacts the way we vote and our news reporting.

Looking at the army’s influence on fashion and at its impact on philanthropy, medicine, technology and benevolence, the army is revealed as recognisable and distant, loved and loathed. Society gallery also examines ceremony, remembrance and the moments when communities have encountered British soldiers on their streets in circumstances of conflict, natural disaster and national security.

The Museum’s Public Programme launches with free themed tours, talks and topical debates about the British Army. This Easter children are invited to take part in a free robotics challenge (1-17 April). For more information visit www.nam.ac.uk and join the conversation with #newNAM.

The National Army Museum is the leading authority on the history of the British Army. Founded in 1960 by Royal Charter and established for the purpose of collecting, preserving and exhibiting objects and records relating to the Land Forces of the British Crown it is a museum that moves, inspires, challenges, educates and entertains.  The museum seeks to tell the story of the British Army, the personal experiences of the soldiers who have served in it and to connect the British public and it’s army demonstrating how the role of the army and its actions are still relevant today.