The National Museum of the Royal Navy (NMRN), National Army Museum (NAM), the Royal Air Force Museum (RAFM) and Commonwealth War Graves Commission (CWGC) are delighted to announce the launch of a country-wide celebration of our service personnel in conjunction with this years Armed Forces Week (21-27 June). All four organisations have come together to host a virtual walk event In the Footsteps of Our Forces, and are appealing to the public to reflect on and celebrate the role of our Armed Forces today and in the past.

The virtual walk will kick off on Monday 21 June, Armed Forces Week, and will end on Sunday 4 July. The public will have two weeks to complete their chosen distance of either 5, 10 or 25K. They will also be able to download one of the suggested routes which will take then around museums, war graves, memorials, historical sites and places of remembrance. All of those who complete the walk will be awarded a commemorative medal to mark their achievement.

Entry for the In the Footsteps of Our Forces walk is £18 and the money will go towards the three museums, and the Commonwealth War Graves Foundation (CWGF), which are all registered charities. A discounted ticket of £15 is offered for the Armed Forces Community (including veterans, cadets and serving personnel). If five or more friends or family members enter, they will be eligible for a 10% discount on tickets. If a group of 10 or more enter then a 15% discount will apply. Tickets must be purchased in a single transaction, and medals will be posted to one address.

All four charities preserve the history of the Armed Forces and inspire with stories of sacrifice and courage and have seen visitations to their sites severely impacted in the last year. The money raised will support each organisation in helping to continue to tell the stories of those who served and are still serving in the Armed Forces today.

The four organisations who worked together last year in creating virtual programmes to commemorate the 75th anniversaries of VE and VJ Day and have been nominated for a Museums and Heritage Award for best Partnership and, are excited to working together again.

Dominic Tweddle, Director General of the National Museum of the Royal Navy, says:

'Only last week in Portsmouth alongside Admiral Nelson’s Flagship, HMS Victory, we bid farewell to the Strike Carrier Group as it undertook its deployment. This was the largest concentration of maritime and air power to be deployed from the UK in a generation and demonstrates the scale of the UK’s military commitment still today. It is proof that our role as a museum continues to be connecting the work of our service personnel today, with the experience of those 100, 200 and 300 years ago and we hope that that is something that participants in this walk will reflect on.'

'Last summer we were all humbled at the incredible efforts of Captain Sir Tom Moore as he celebrated the work of our NHS through a personal walking challenge. Inspired by this spirit and determination we hope the public will undertake their own walking challenge in support of the heritage organisations that celebrate and commemorate the work of our Army, Navy and Air Force and perhaps pay a visit to Captain Sir Tom’s Portrait now proudly on display in our Chelsea Museum.'

'The pandemic has required us to think again about the way we commemorate important anniversaries and events. Last year’s incredibly successful VE and VJ Day virtual events in collaboration with our partners, has driven us to seek more ways in which we can work together and it is wonderful to be commemorating the work of our three services together with our colleagues at the other service museums and the Commonwealth War Graves Commission.'

'We think that this walking challenge is a fantastic opportunity to get people out and exploring the war graves and memorials in their local areas and to connect those with the stories of historic and modern service personnel told at our partner museums. Working together in this way helps us all to illustrate the evocative, inspiring and poignant stories we all seek to highlight throughout our work.'

'Our Service Museums and the CWGC do vital work in keeping the story of our Armed Forces and their sacrifice alive for future generations. I hope that during this Armed Forces Week, service personnel and members of the public can reflect upon their incredible contribution through this endeavour.'

For further information on how to get involved in In the Footsteps of Our Forces, please visit one of the partner websites nmrn.org.uk, nam.ac.uk, rafmuseum.org.uk, CWGC.org.

The National Museum of the Royal Navy, established in 2009, tells the story of the four fighting forces of the British Royal Navy, the Royal Marines, the Fleet Air Arm, the Submarine Service and the Surface Fleet.

Ours is the epic story of the Royal Navy, its impact on Britain and the world from its origins in 625 A.D. to the present day. The Museum Group includes the Royal Naval Museum, the Fleet Air Arm Museum, the Royal Navy Submarine Museum with HMS Alliance, Explosion! The Museum of Naval Firepower, the Royal Marines Museum, HMS Victory, HMS Caroline, HMS M33, HMS Warrior and NMRN Hartlepool (including HMS Trincomalee).

Further information is available on nmrn.org.uk

About the Royal Air Force Museum

About the RAF Museum - The RAF Museum is a place of storytelling and sharing. Our RAF stories include those of serving personnel, veterans, cadets and reserves. They explore our rich collections of technological innovations, personal items and the heritage of our site. The stories come from times of war and keeping the peace, from at home and abroad. They may be about courage, fear, love, loss or laughter. Visitors are encouraged to discover these stories throughout our exhibitions, across our two sites in London and the Midlands, and online – and perhaps contribute their own. The RAF Museum is free to enter. Keep up to date with the latest news and event information by following us at rafmuseum.org.uk

The Commonwealth War Graves Commission (CWGC) commemorates the 1.7 million Commonwealth servicemen and women who died during the two World Wars. It also holds and updates an extensive and accessible records archive. The Commission operates in more than 23,000 locations in more than 150 countries and territories. 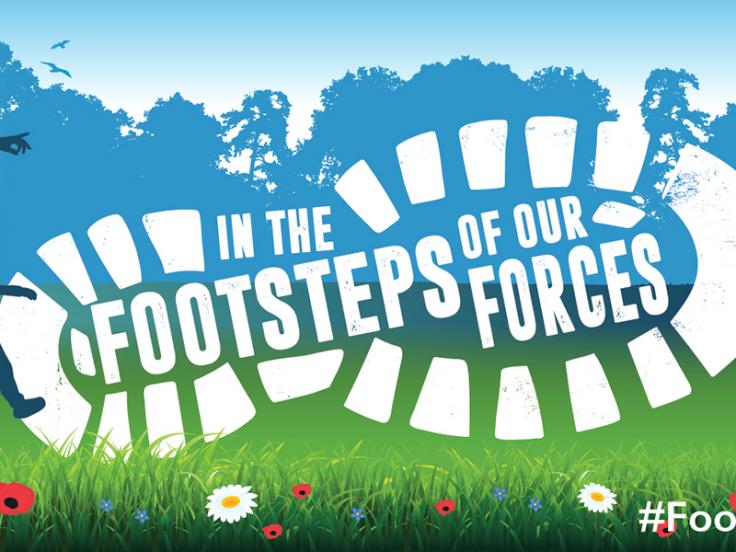 In the Footsteps of Our Forces

Get your marching boots on and join our walking challenge to show your support for those who serve and help keep their stories alive.