Fought near the western frontier of Egypt between 23 October and 4 November 1942, El Alamein was the climax and turning point of the North African campaign in the Second World War (1939-45). The Axis army of Italy and Germany suffered a decisive defeat by the British Eighth Army. 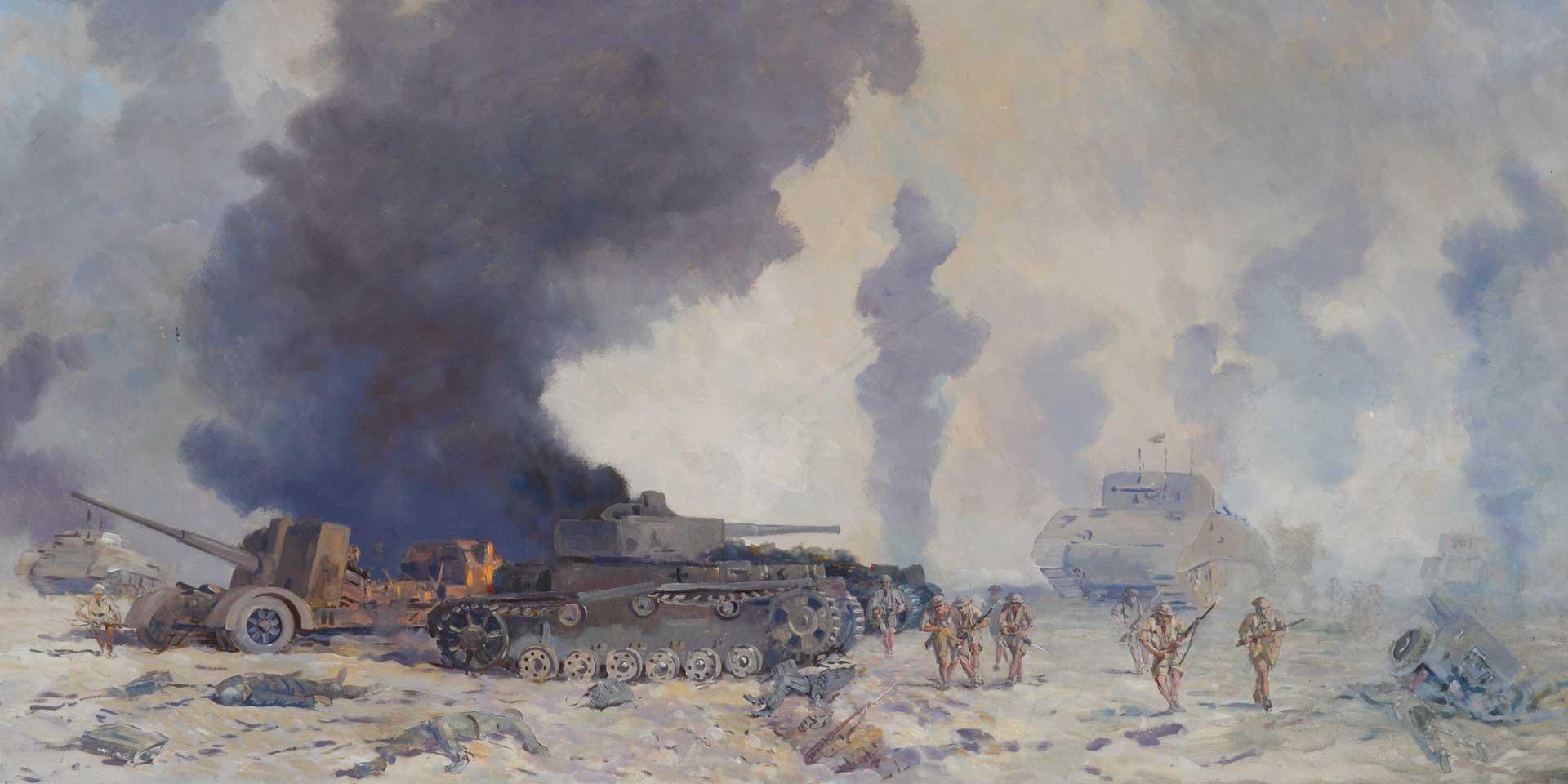 Conflict in North Africa had been ignited in 1940 by Italy’s invasion of Egypt from its colony of Libya. This threatened Britain’s vital strategic assets, the Suez Canal and Persian oil fields. However, when the Italians were defeated, Germany intervened on behalf of its ally in the spring of 1941.

Under the bold leadership of General Rommel, the Axis enjoyed startling successes, recapturing Libya and threatening Egypt. Yet, by late 1941, when Rommel’s forces had overstretched their supply lines, they were forced to fall back in the face of a determined British offensive. The following year, a revived Axis effort saw Rommel defeat the British at Gazala and capture Tobruk.

For a while it seemed that Rommel would link up with the Germans advancing in the Caucasus and so overrun the whole Middle East. The British conducted a chaotic retreat into Egypt, but rallied their battered army and made a stand at the First Battle of El Alamein. This was a position that, unlike others in the desert, could not be turned by a flanking manoeuvre. It bordered both the Mediterranean and the Qattara Depression, a sea of quicksand impassable to mechanised forces.

The summer of 1942 saw the defeat of Rommel’s final efforts to break through into Egypt. The initiative now lay with the British. They planned another offensive that would finally end the Axis threat to the Middle East.

Lieutenant-General Bernard Law Montgomery (1887-1976) was one of the most capable and controversial British commanders. In August 1942, he was appointed Eighth Army's commander and immediately set about transforming its fighting spirit.

At Alamein, he commanded over 190,000 men from across the British Empire, Greece, Poland and France. They were equipped with over 1,000 tanks, 900 artillery pieces and 1,400 anti-tank guns.

Field Marshal Erwin Rommel (1891-1944) was already famous for his brilliant generalship during the battles for France and North Africa. Rommel was a master of desert warfare, earning the nickname ‘Desert Fox’. Exuding frenetic energy and leading from the front, he inspired his troops to great feats of heroism and endurance.

His instinct for handling armoured formations, combined with the qualitative superiority of German units, enabled the ‘Afrikakorps’ to consistently outmatch the Allies, often against heavy odds. At Alamein, he commanded 116,000 German and Italian soldiers, 540 tanks, 500 artillery pieces and 490 anti-tank guns. 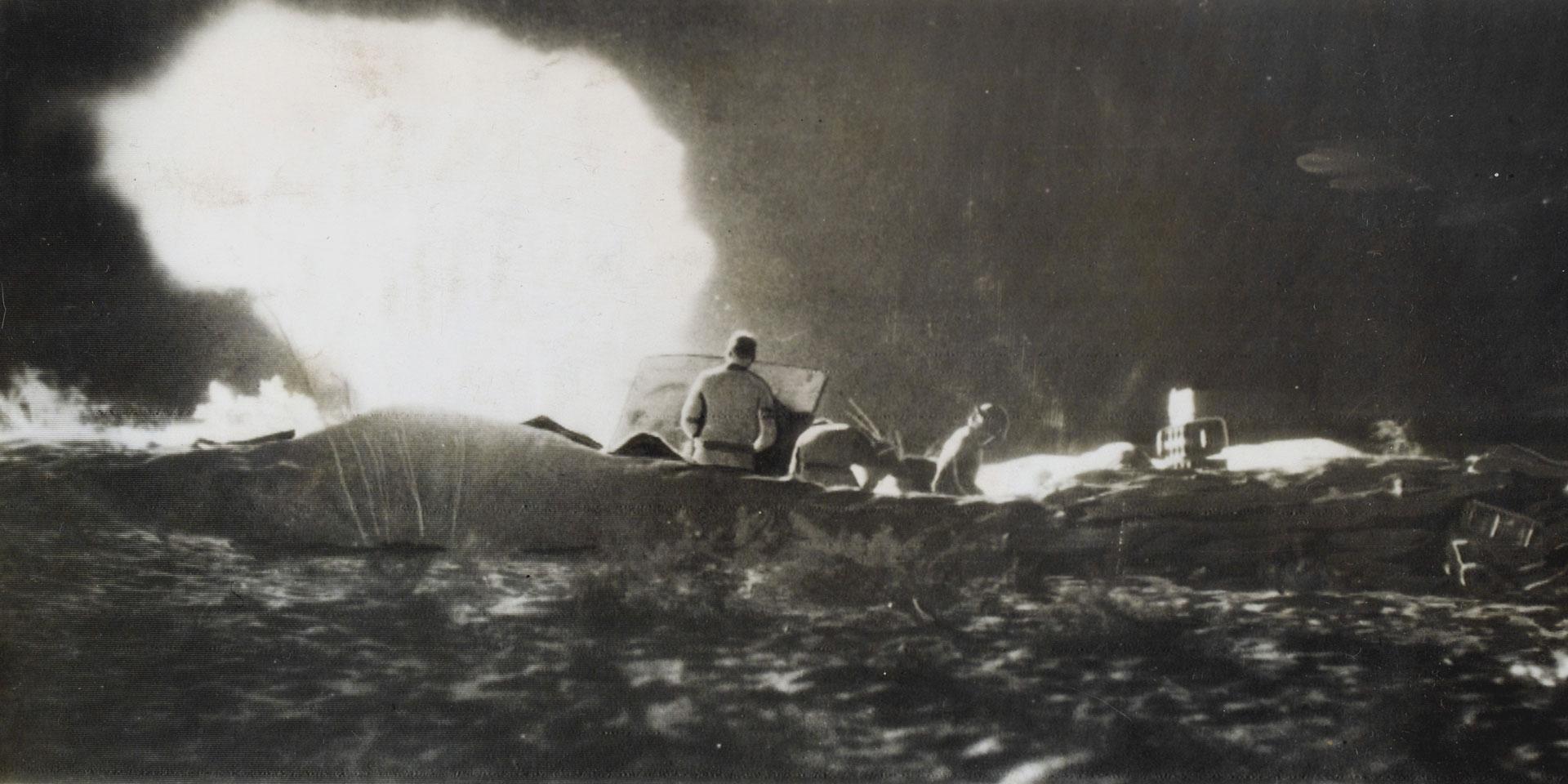 The Axis forces were once more in a critical supply situation. Lacking the fuel and mechanised forces to fight a mobile battle, Rommel instead constructed strong defensive positions protected by deep minefields, which he nicknamed the ‘devil’s gardens’.

Realising the strength of the Axis defences, Montgomery resisted the impatient pleas of British Prime Minister Winston Churchill for an early attack. Instead, he set about building up his forces, improving the morale and training of his troops, ensuring that he had superior numbers of men, tanks, guns and aircraft.

A mine explodes close to a British artillery tractor as it advances through minefields at El Alamein, 1942

Having assembled a powerful multinational Allied force, Montgomery unleashed his offensive on the night of 23 October with a spectacular artillery barrage. In the early hours of 24 October, British infantry and engineers began Operation Lightfoot, a painstaking and hazardous process of creating two channels in the minefields through which the armoured forces were to advance.

The British then established a forward line from where the Axis forces would be engaged and worn down. This battle of attrition, euphemistically termed ‘crumbling’ by Montgomery, involved brutal close-quarter fighting in which the soldiers were tested in a maelstrom of heat, noise and horror.

While they were able to beat off Axis counter-attacks, British efforts were hampered as their tanks were held up in the congested minefield corridors and suffered punishing losses from enemy anti-tank guns.

'The battle is going very heavily against us. We're being crushed by the enemy weight... We are facing very difficult days, perhaps the most difficult that a man can undergo'. Field Marshal Erwin Rommel, 3 November 1942 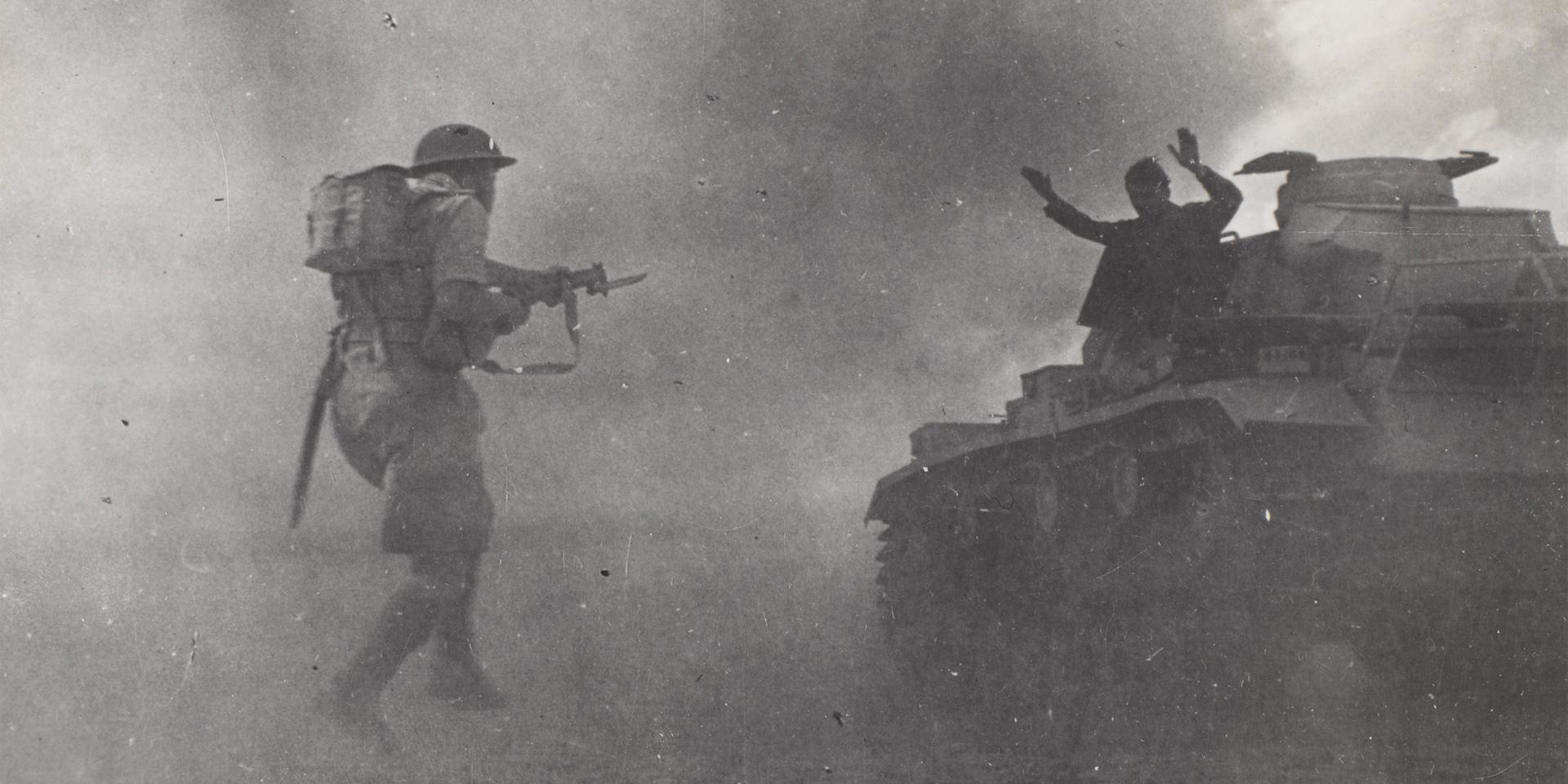 Despite the difficulties, Montgomery held his nerve. He pressed home the attrition of the enemy forces and launching a diversionary attack to draw in scarce Axis reserves. He then paused and regrouped before launching his final attack, codenamed Operation Supercharge, on the night of 1-2 November. After several more days of severe fighting, the British achieved a decisive breakthrough on 4 November.

While the British captured the bulk of the Axis infantry, Montgomery’s caution allowed the motorised portion to escape and live to fight another day. Nevertheless, the British had won a remarkable victory and Montgomery began pursuing his beaten foe back into Libya and Tunisia.

El Alamein was the first clear-cut and irreversible victory inflicted by the British Army upon the Axis. Coming after years of frustrating setbacks, this was a boost to British morale. Victory proved that the problems that had plagued the Army for years had at last been overcome and that its equipment, tactics, generalship and fighting spirit were a match for the Axis.

For Churchill, the victory was vital for re-establishing British prestige before America reduced Britain to the role of junior partner in the western alliance. This was why he had been so anxious to instigate the battle before the start of Operation Torch, the Allied landings on the coast of Algeria and Morocco.

German prisoners of war under guard by a signpost to El Alamein, 1942

The landings began on 8 November and forced the Axis to fight on two fronts. With the Allies also prevailing in the naval and air wars raging in the Mediterranean, the Axis position in North Africa was now untenable.

Despite this, Hitler belatedly ordered a massive re-enforcement, which enabled the Axis to fight a defensive campaign in Tunisia into 1943. Although they fought a tenacious rearguard, the Axis forces were in an impossible position. In May, they were forced to surrender, with the loss of around 240,000 prisoners.

Aided by Churchill’s rhetoric, which extolled it as ‘the end of the beginning’ of the war, El Alamein has become enshrined in British mythology as a great strategic turning point of the war. This may be an overstatement given that North Africa was only a sideshow compared to the titanic battles waged on the Eastern and Western Fronts. However, the battle boosted national morale and became one of the most celebrated victories of the war.

Alamein also established the reputation of Montgomery. Using his talent for self-publicity, he claimed all the credit for the victory. This made him a household name and secured him prestigious commands in Italy and North-West Europe. While he was able to cement his image as a national hero, Montgomery’s conduct during the battle remains the subject of debate.

‘The defeat of the enemy in the Battle of El Alamein, the pursuit of his beaten army and the final capture of Tripoli... has all been accomplished in three months. This is probably without parallel in history’.
Lieutenant-General Bernard Montgomery, 23 January 1943 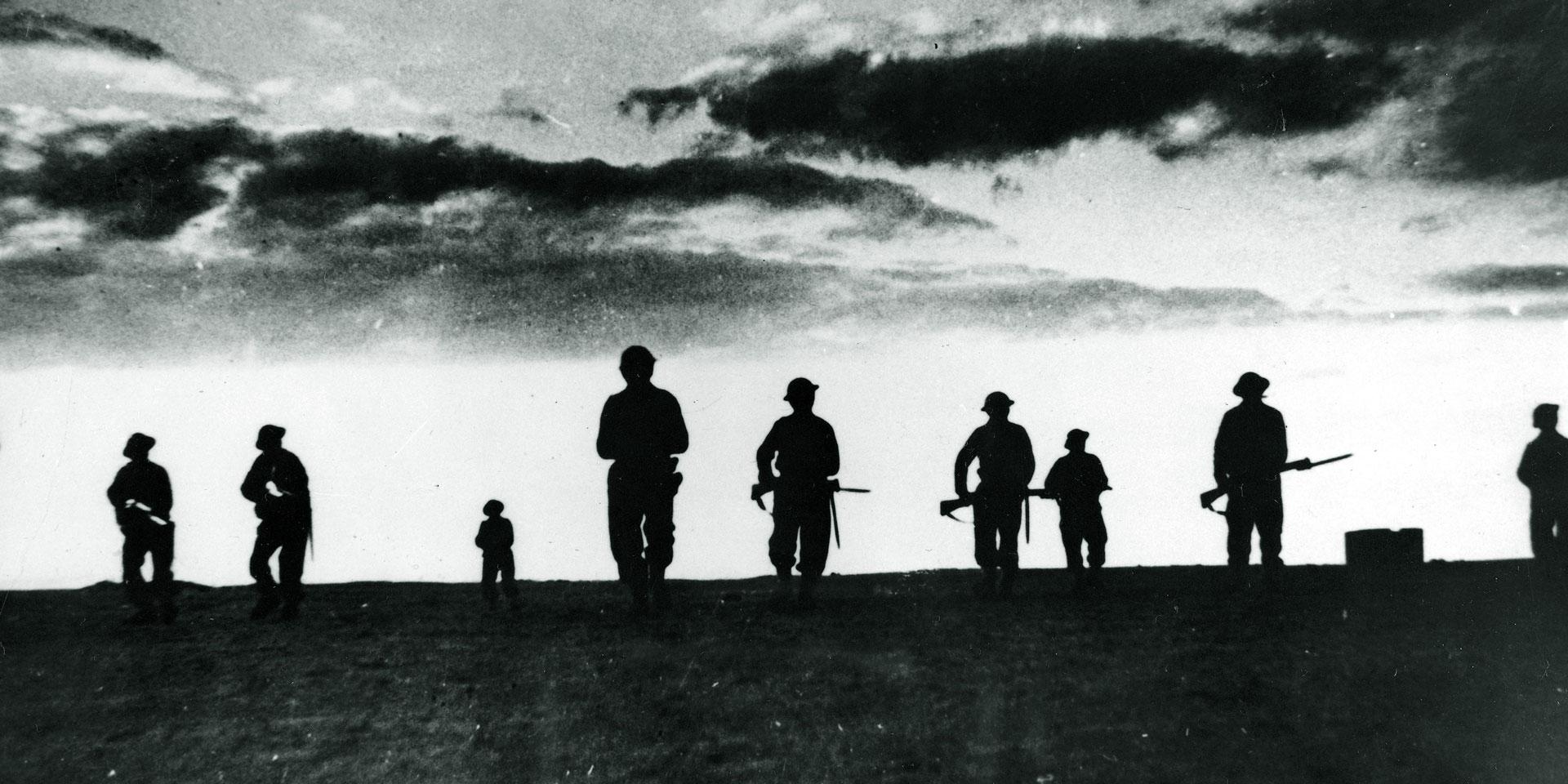