Fought near Inverness in Scotland on 16 April 1746, the Battle of Culloden was the climax of the Jacobite Rising (1745-46). The forces of Prince Charles Edward Stuart, attempting to reclaim the throne for his family, met a British army led by the Duke of Cumberland, son of the Hanoverian King George II. The battle finally settled a contest for the monarchy that had lasted almost 60 years. 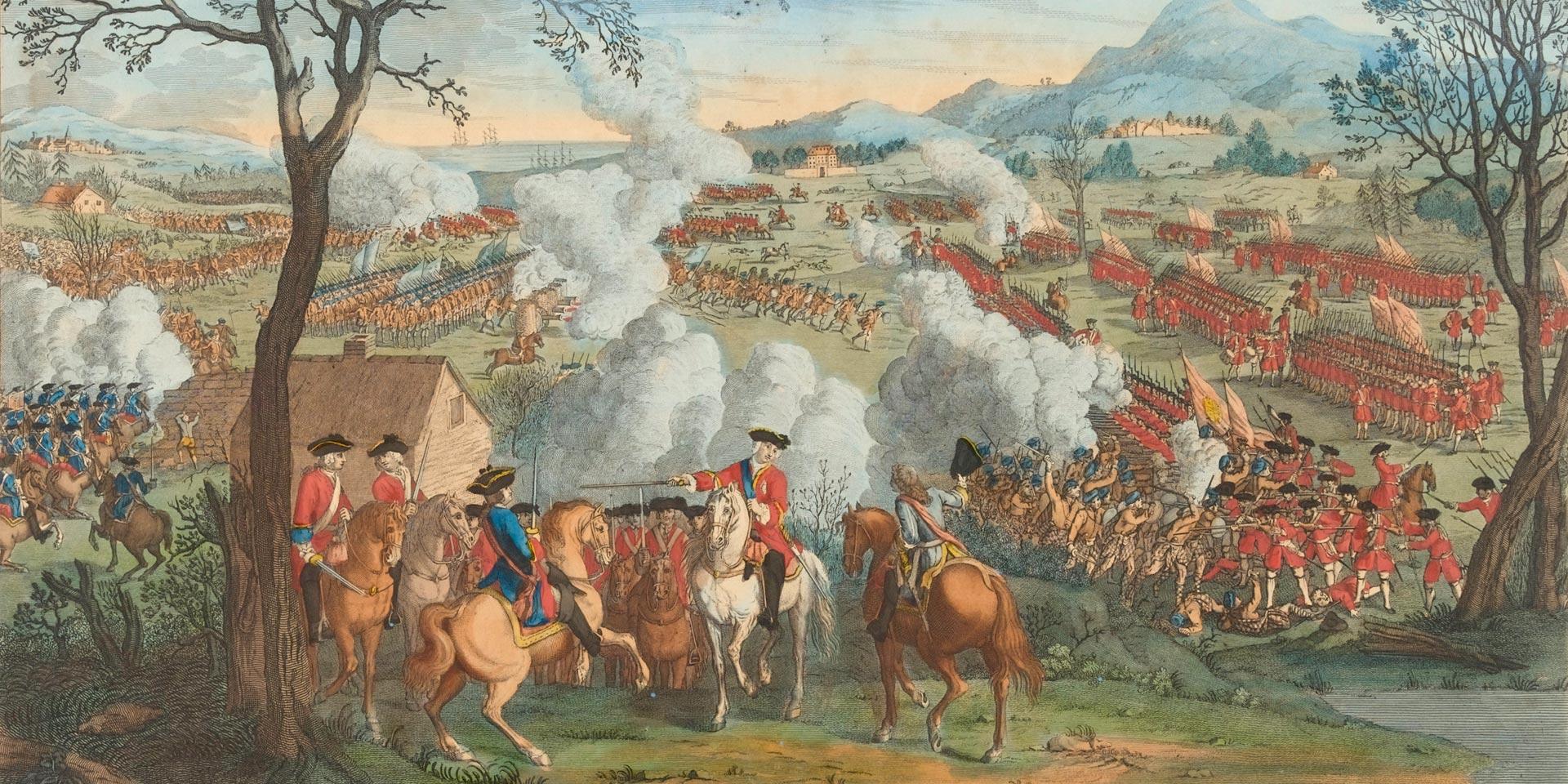 In 1688, in an act that was immediately hailed as a ‘Glorious Revolution’, Parliament and an overwhelmingly Protestant political nation deposed the Roman Catholic King James II. His arbitrary actions and fostering of a powerful standing army had appeared to presage the establishment of an absolute Catholic monarchy.

James’s Protestant daughters from his first marriage, Mary and Anne, reigned after him. But when Anne died in 1714 leaving no heir, Parliament replaced the Stuart dynasty with their German cousins, the Hanoverians. The claims of James II’s Catholic son, James Francis Edward, the so-called ‘Old Pretender’, were ignored.

In 1708, 1715 and 1719, the Old Pretender had attempted - with either French or Spanish backing - to raise the banner of revolt in Scotland, the home of his forefathers.

But by 1745, despite its continued unpopularity, the Hanoverian dynasty appeared secure.

So, when news arrived that the Old Pretender’s son - Prince Charles Edward, the ‘Young Pretender’ - had landed in Scotland with a handful of followers and was gathering support amongst the highland clans, there was initially little alarm.

This changed rapidly when Charles Edward’s highland army defeated government troops at Prestonpans in September 1745, occupied Edinburgh, and then in November entered England. 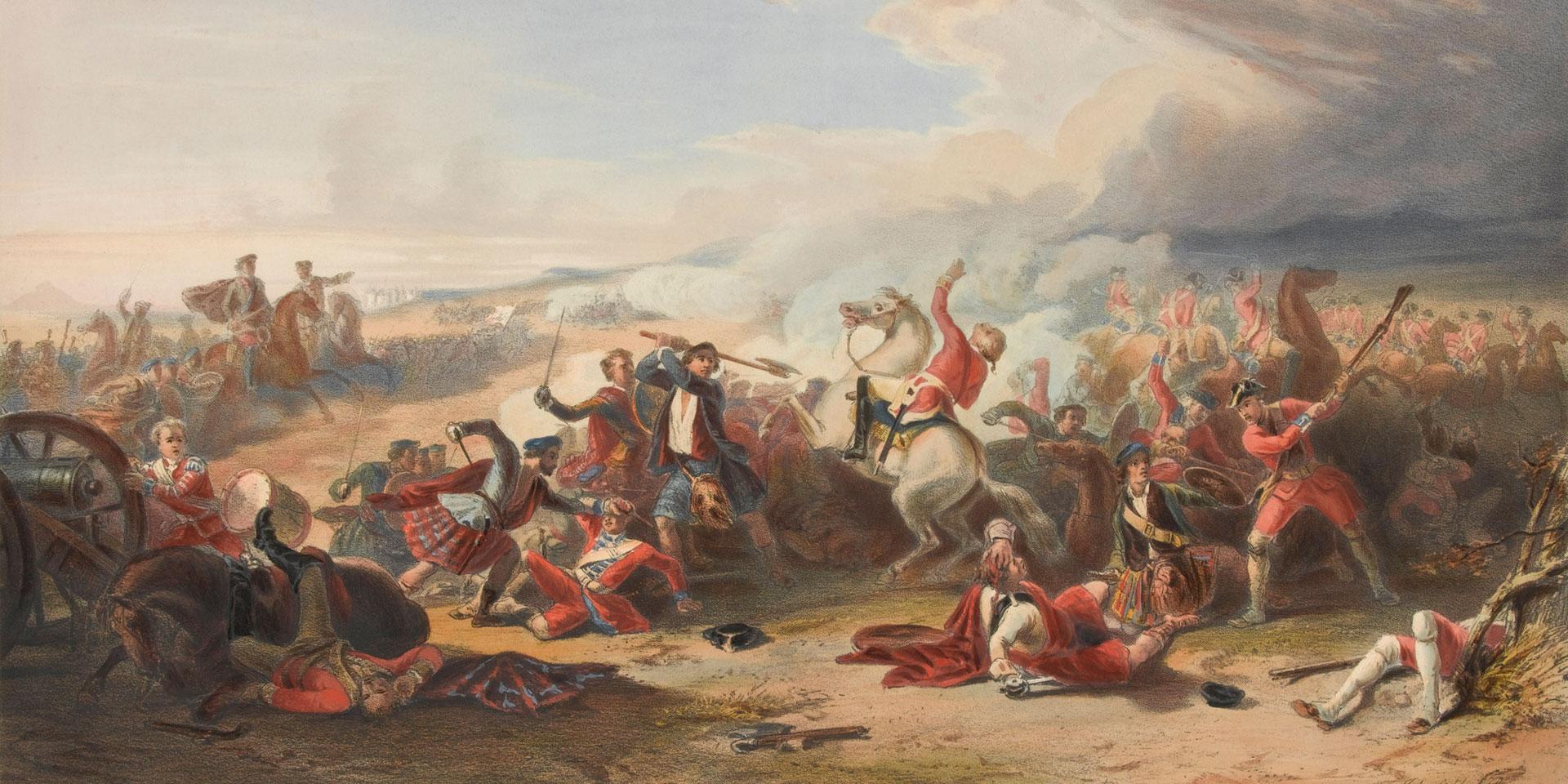 The 5,000-strong highland army marched as far south as Derby, but failed to gather English support. It was confronted by converging armies made up of British troops recalled from fighting in the War of the Austrian Succession (1740-48) on the continent. On 5 December it began to retreat back to Scotland.

After receiving French reinforcements the highlanders defeated the first government army sent against them at Falkirk (17 January 1746). But by the time the highland army came up against the Duke of Cumberland’s forces on Culloden Moor on 16 April, it was dispirited, poorly supplied and suffering heavy desertion.

Prince Charles Edward (1720-88), born and brought up in Italy, possessed virtually no military experience before arriving in Scotland. However, his army’s early victories convinced him that the ‘highland charge’, with broadsword in hand, was irresistible. In this he was at loggerheads with the best of his subordinate commanders, Lord George Murray, who knew better.

The highland army mustered only 5,000 men at Culloden; some 2,000 were on operations elsewhere. Its mounted arm was very weak and the motley collection of 12 cannon available was of different calibres and poorly served.

The British commander, William Augustus, Duke of Cumberland (1721-65), an enthusiastic soldier from a young age and known as the ‘martial boy’, was already Captain General of the British Army. He was considered an incipient military genius largely because of his bold conduct at Fontenoy a year before, a notable but epic defeat at the hands of the French.

A strict disciplinarian, Cumberland restored the confidence of the army defeated at Falkirk, introducing a new bayonet drill to combat Jacobite use of sword and target (a small shield). His 9,000 men constituted a well-balanced force of horse and foot, supported by ten 3-pounder cannon and six mortars.

The highland army had attempted to launch a surprise attack the night before the battle. But, delayed by men straggling in the search for food, it had not reached Cumberland’s camp by daybreak. It retreated to a field of battle five miles east of Inverness, Culloden Moor.

The battlefield was ill-chosen, as it afforded a clear field of fire to Cumberland’s artillery. The highlanders were cannonaded for nearly half an hour without effective reply. Orders to attack passed slowly down the highland army’s chaotic chain of command, but eventually the highlanders were unleashed. They charged across the 350 yards (320m) of ground separating them from the enemy.

On the left, the MacDonalds never reached the British line. But the large highland regiment on the right, Clan Chattan, smashed into Barrell’s 4th and Munro’s 37th Foot with great force. They were repulsed after fierce hand-to-hand combat, only a few highlanders fighting their way through to make an unavailing attack on Cumberland’s second line.

At this point the cavalry of Cobham’s and Lord Mark Kerr’s regiments of dragoons along with Kingston’s Light Horse began to work their way around the highlanders’ flanks, converting defeat into a rout. The pursuit extended all the way to Inverness. The actual fighting had lasted less than an hour.

The silver Cumberland tankard was made to commemorate the Hanoverian victory, c1746

‘After the battle there was not a bayonet in this regiment that was neither bloody or bent.’
Private Isaac Midgely recalling the Battle of Culloden,  1746

Between 1,000 and 1,500 of Prince Charles Edward's men were killed. Few were wounded. Cumberland had drawn attention to enemy orders captured prior to the battle which suggested the highlanders did not intend on taking prisoners. The authenticity of these orders is disputed, but it seems his men had taken the hint.

The casualties on Cumberland’s side were significantly lower: 50 dead and 259 wounded.

The Young Pretender escaped the battlefield and, after many adventures, reached France. But the Stuart cause was ruined forever. 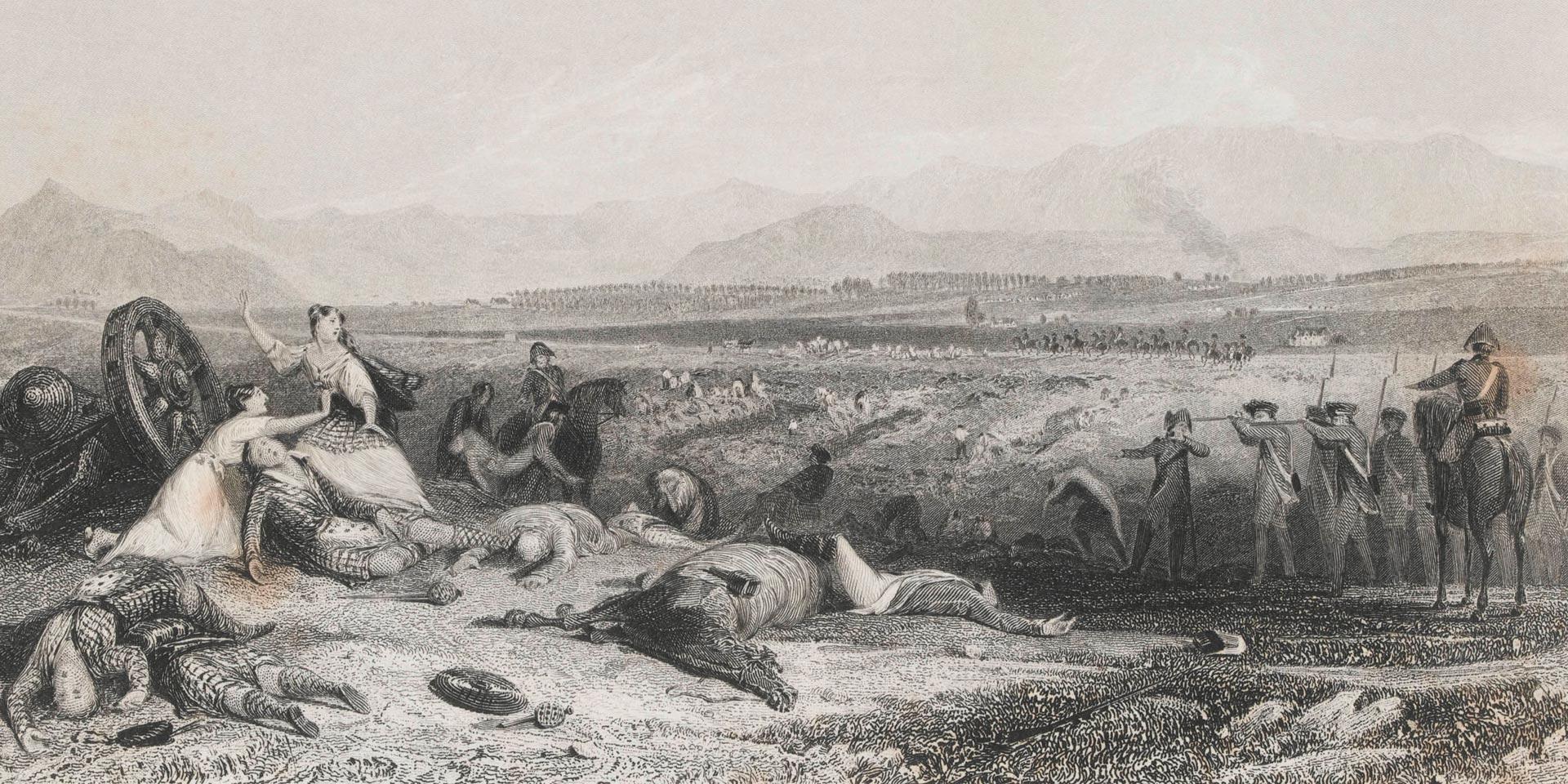 Cumberland’s men harried the highlands, burning homes and driving off cattle. The British government determined to destroy the highland way of life, forbidding the wearing of highland dress, the carrying of weapons and passing laws against the clan system.

Cumberland was initially fêted for his victory. The flower ‘Sweet William’ was named after him, and Handel composed the oratorio ‘Judas Maccabeus’ in his honour.

But the public mood turned against him. The excesses of his troops earned him the lasting nickname ‘The Butcher’. He never won another battle and resigned his command a few years later.

By restricting French interference at home, Culloden paved the way for global expansion. It also safeguarded the succession of the House of Hanover, ancestors of the present Queen Elizabeth II. The events that followed united the nation in such a way that, over 270 years later, Culloden remains the last battle to have been fought on British soil.

Within ten years of the battle, highlanders were being recruited into the British Army in large numbers to fight in Germany and North America. By the time Sir Walter Scott was writing in the early 19th century, highland derring-do had become cloaked in romantic legend. And - in stark contrast to the harsh measures employed in the wake of Culloden - King George IV, and later Queen Victoria, gave the royal seal of approval to all things emanating from the highlands of Scotland.

Commission in the 78th Fraser Highlanders of former Jacobite Archibald Campbell of Glenlyon, 1757

Today the battlefield of Culloden, preserved by the National Trust for Scotland, is a place of pilgrimage. The publication of John Prebble’s best-seller ‘Culloden’ (1961) led to an upsurge of interest, at the same time exploding the myth of 'Bonnie Prince Charlie'. It reproached him for his lack of concern for the men of the highlands who sacrificed so much for him.

The Battle of Culloden was never one of England versus Scotland. Taking into account the loyal clans, the regiments raised in support of the government in Edinburgh and Glasgow, as well as the Scottish regiments of the British Army (three of which - the 1st, 21st and 25th Foot - fought at Culloden), there were ultimately more Scots in arms against Prince Charles Edward than there were for him.

Memorial cairn at the centre of the battlefield of Culloden, 2009 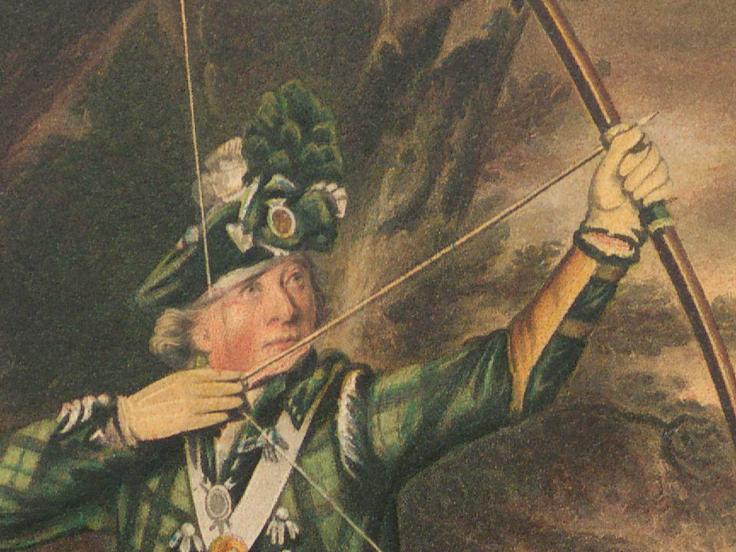