The Battles of Lexington and Concord on 19 April 1775, the famous ‘shot heard ‘round the world’, marked the start of the American War of Independence (1775-83). Politically disastrous for the British, it persuaded many Americans to take up arms and support the cause of independence. 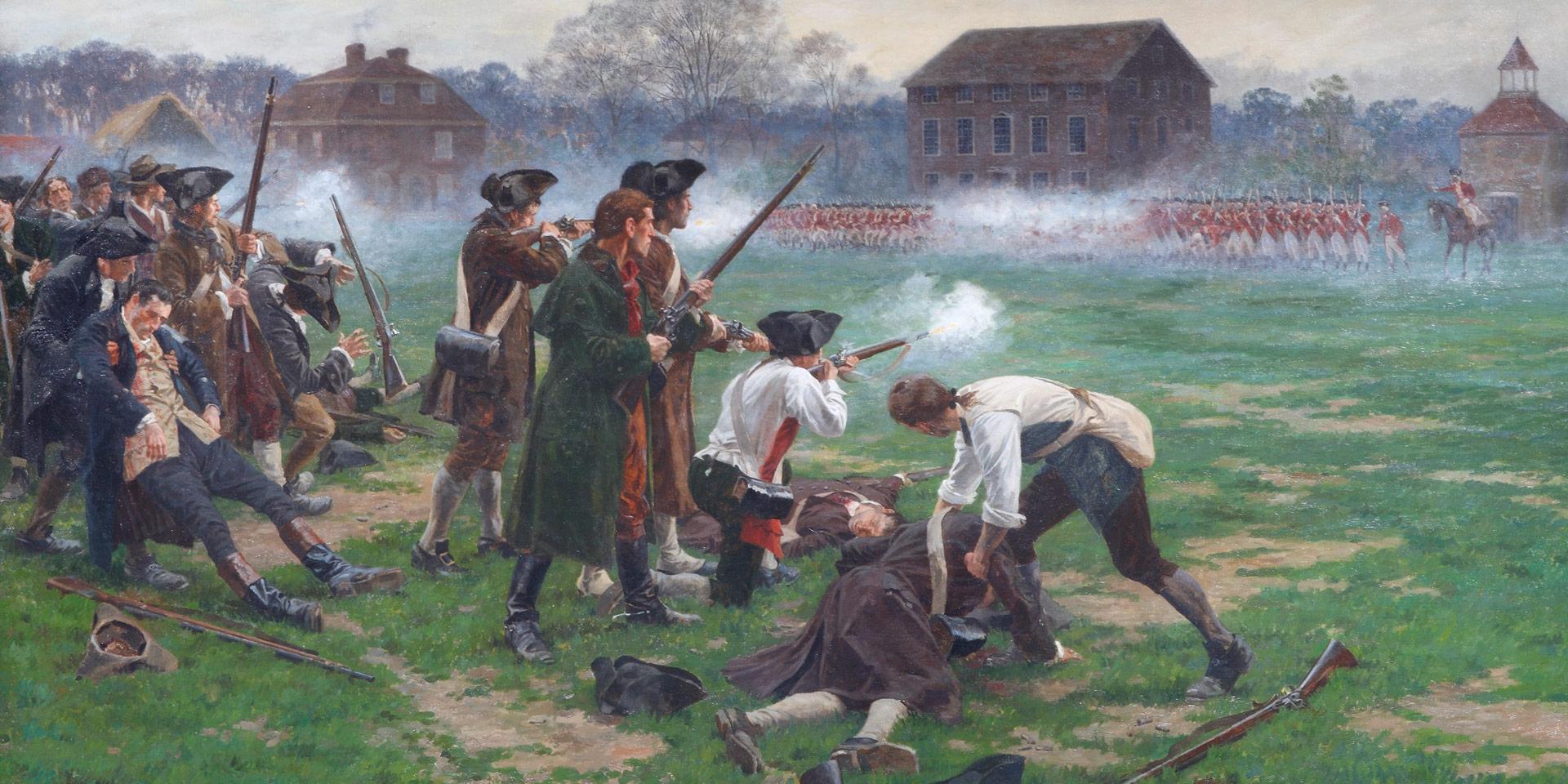 Britain’s 13 American colonies were founded in the 17th and early 18th centuries. They ran along the eastern coastline from Massachusetts in the north to Georgia in the south. Most of the colonists were doing well as the American economy was thriving. They had the highest standard of living and lowest taxes in the western world.

Each colony was administered by a royal governor, his council and an elective colonial assembly. The governors also controlled the troops in their colonies. These policed the towns and ports and defended the settlers from border attacks by Native Americans and the French.

British victory in the Seven Years War (1756-63) sowed the seeds of the American revolt. It freed the colonists from the need for protection against the French threat on their frontier. It also gave free rein to the forces working for independence.

The British wanted to increase taxes and make the colonies pay for their defence. The colonists argued that only their own assemblies, and not the British parliament, had a right to levy taxes. 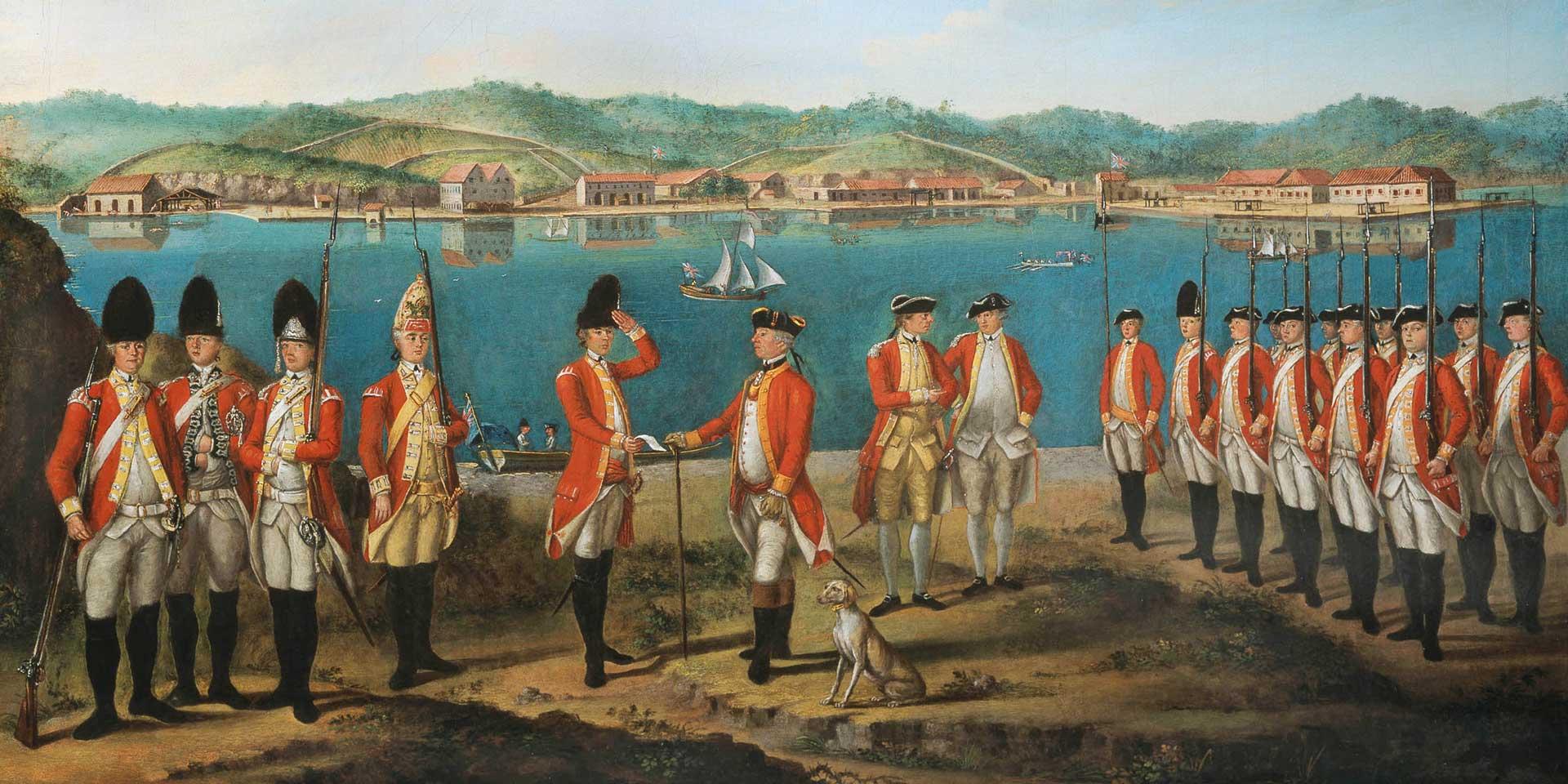 In December 1773 the colonists dumped a cargo of British tea into Boston harbour in protest at the Crown's attempt to tax imports. In response to the ‘Boston Tea Party’, the government introduced a series of measures known as 'Intolerable Acts'.

They closed the port of Boston, dissolved the colonial assembly and placed Massachusetts under military rule and the command of Major-General Thomas Gage.

Until this time, the colonies had been allowed to develop with little interference. But now London was attempting to tighten its political control. Many colonists were convinced that their economic prosperity and liberty were at stake. As the dispute continued, they gradually took over the local militias and started arming and drilling.

Acting on intelligence that the militia were stockpiling weapons, Gage ordered Lieutenant-Colonel Francis Smith to march to Concord and seize the arms.

On 19 April 1775 Smith encountered militiamen at Lexington Green. The latter had been forewarned about British plans and had quickly mobilised.

This cartoon, entitled ‘The Bostonians in Distress‘, symbolises the closing of the port by placing its inhabitants in a cage suspended from the Liberty Tree, c1774

Lieutenant-Colonel Francis Smith (1723-91) commanded the 800-strong force, drawn from several regiments, that was sent to seize the arms. An officer with 12 years’ colonial experience, Smith had served in America since 1767.

Most of the militiamen were farmers or tradesmen, including the commander of the Lexington militia, John Parker (1729-75). He had fought for the British during the Seven Years War at Louisburg (1758) and Quebec (1759).

Non-uniformed, they were armed with a variety of firearms including muskets and fowling pieces.

Most militiamen served for only a few months at a time and were unavailable for lengthy operations. Their best soldiers were the 'minute men’, militia who had undertaken to turn out at a minute's notice. Quick-moving, they were better suited to irregular warfare and skirmishing than European-style military manoeuvring in formation.

Around 80 militiamen were present on Lexington Green and around 500, commanded by Colonel James Barrett (1710-79), were at Concord. At least 3,500 were present by the time the British returned to Boston.

After being warned of opposition on the road ahead, Smith ordered his light infantry, under Major John Pitcairn, to move forward while he stayed with the main body of troops.

Pitcairn's men encountered about 80 militiamen under John Parker in parade-ground formation. Parker knew he was outnumbered, but probably thought violence could be avoided. He was putting on a show of political strength rather than placing his men in fighting position.

Pitcairn called on the militia to disperse. But just as this was about to happen, shooting broke out. It is unclear who fired the first shot - both sides had given orders not to fire - but eventually the British discharged a volley and charged with fixed bayonets. Eight militiamen were killed and ten wounded. One redcoat was injured.

Smith arrived soon after to find Pitcairn’s troops scattered and pursuing the retreating militiamen. After restoring order and reforming his light infantry, he pushed on to Concord.

Rather than fight in Concord itself, the rebels withdrew to North Bridge. While the British fruitlessly searched the town for arms, the rebels awaited reinforcements there.

Some hours later there was a second skirmish between 90 light infantrymen sent to secure the bridge and around 500 militiamen led by Barrett. Finding themselves outnumbered and outmanoeuvred, the light infantry retreated back to the town having suffered several casualties. 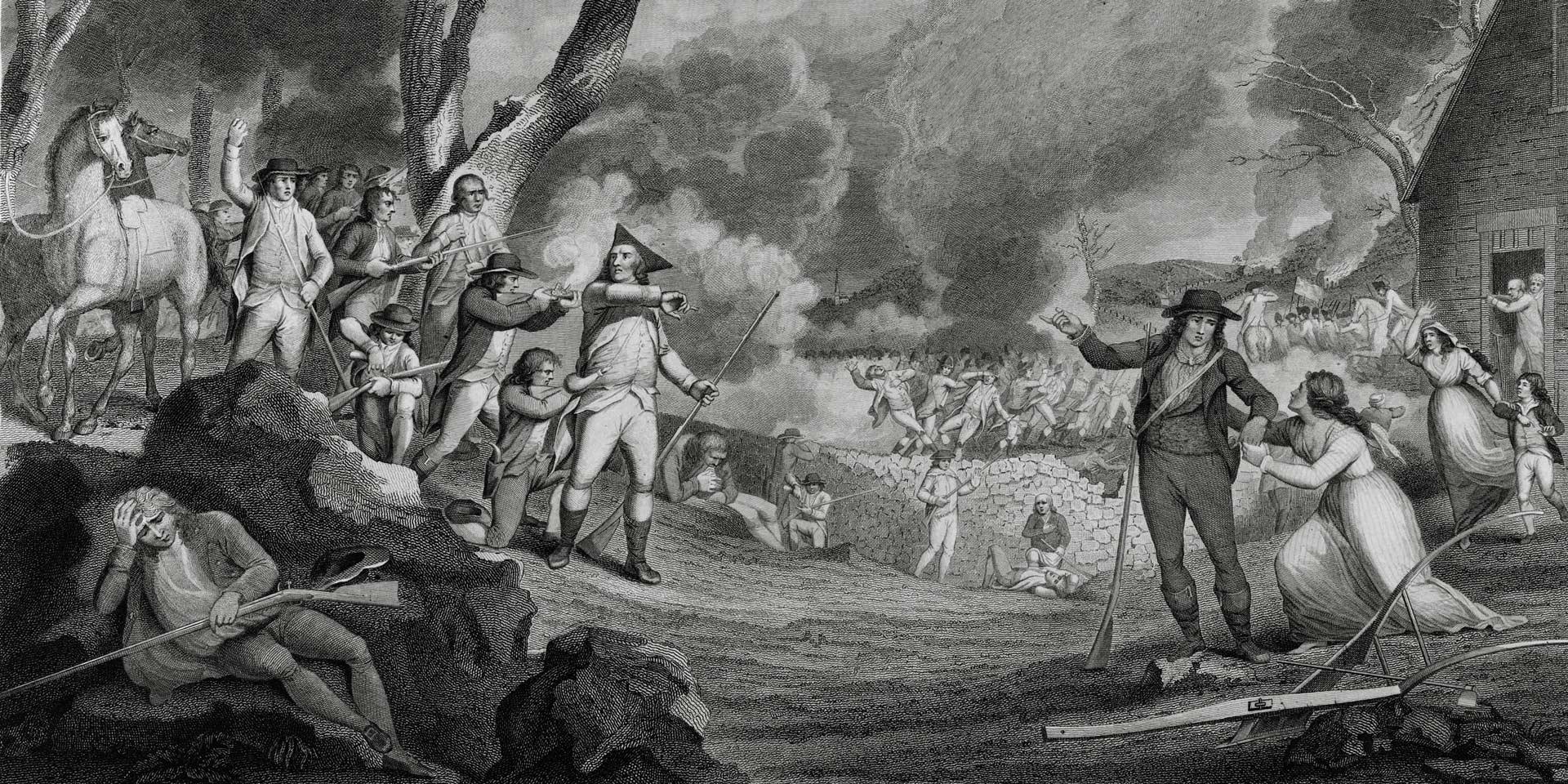 On hearing gunfire, Smith marched his men towards the bridge where there was a tense stand-off before the British withdrew towards Boston. However, they were caught by the arrival of more American reinforcements and pressured into a fighting retreat.

The militia’s early warning system was crucial in assembling these men. They now had sufficient numbers to inflict heavy damage on the British.

Smith’s force was repeatedly ambushed and sniped at as it withdrew along the roads to Boston. Several officers were killed or wounded as Smith struggled to maintain control. His men lost discipline and hurried onwards in a general retreat.

By the time it reached Lexington, the column was near collapse. A brigade of British reinforcements, under Brigadier-General Hugh Percy, was waiting there.

After dispersing the pursuing militia with artillery, Percy covered the retreat back to Boston. During the journey the militia repeatedly fired upon the 1,700-strong force, but Percy’s well-planned defensive formations fought them off.

Many of the British had not slept for two days and had marched 40 miles (64km) in 21 hours, much of it under fire. The casualties sustained during the retreat, from an often-unseen enemy, along with the alleged scalping of a redcoat, led them to commit atrocities against the locals.

During the retreat the British lost 73 killed, 173 wounded and 26 missing. American losses were 50 killed, 39 wounded and five missing. Within two days 15,000 men from across New England had assembled and surrounded the British in Boston.

Lexington was not a serious military defeat, but it was politically disastrous for the British. Smith’s expedition managed to seize few weapons and caused the very fighting it was intended to prevent. The violence turned a colonial revolt against British policy into a fight for political independence.

Lexington and Concord led many Americans to support the 'revolution'. For John Adams, these battles were the moment ‘the Die was cast, the Rubicon crossed’. They also showed that American citizen soldiers could stand up to redcoats; something previously doubted by many on both sides.

Newly emboldened, the Americans laid siege to Boston. The British position there was fairly secure once reinforcements arrived at the end of May 1775. They were, however, continually menaced by fire from the surrounding hilltops.

To counter this, on 17 June British troops were ferried across to Breed’s Hill on the Charlestown Peninsula. Here, at a cost of more than 1,000 casualties, they defeated the revolutionaries at Bunker Hill, the first major battle of the American War of Independence. 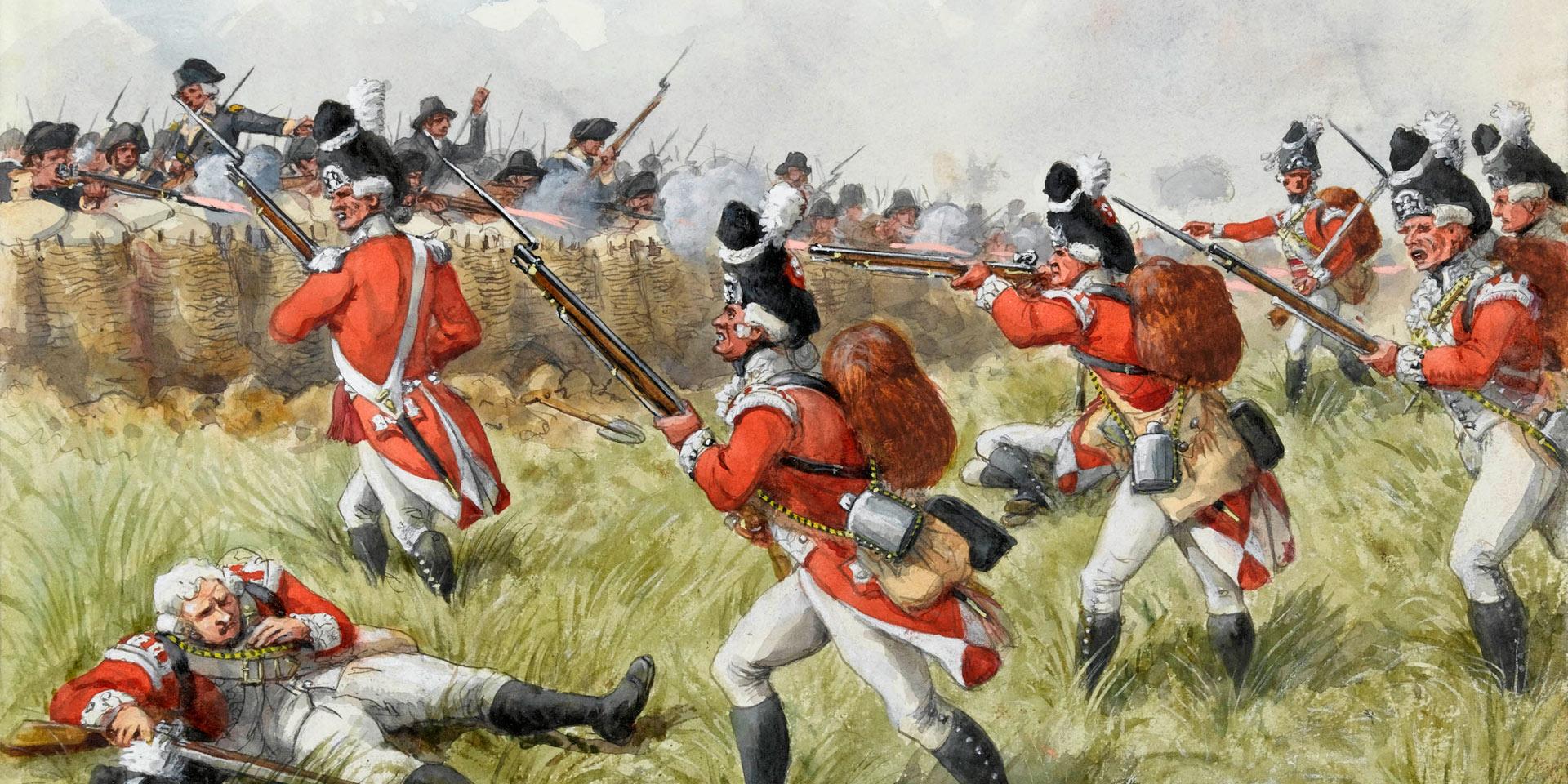 Lexington and Concord started a war that resulted in Britain losing her American colonies. Unsurprisingly, these battles were conveniently forgotten in Britain. However, they soon became vital parts of the foundation story of the United States.

For years afterwards they were portrayed as British attacks on innocent freedom-loving Americans. Many of the truths about the battles, such as who fired first and the importance of the militia preparations, were ignored.

Their status was elevated in Ralph Waldo Emerson’s ‘Concord Hymn’ (1837). First read at Concord on 4 July 1837, his poem, which includes the famous line ‘the shot heard ‘round the world’, became central to the mythology of the American Revolution.