A rare Boer War naval gun in the National Army Museum's collection, one of only three of its type remaining in Britain, sheds light on the largely unknown role of artillery volunteers in the South African war. 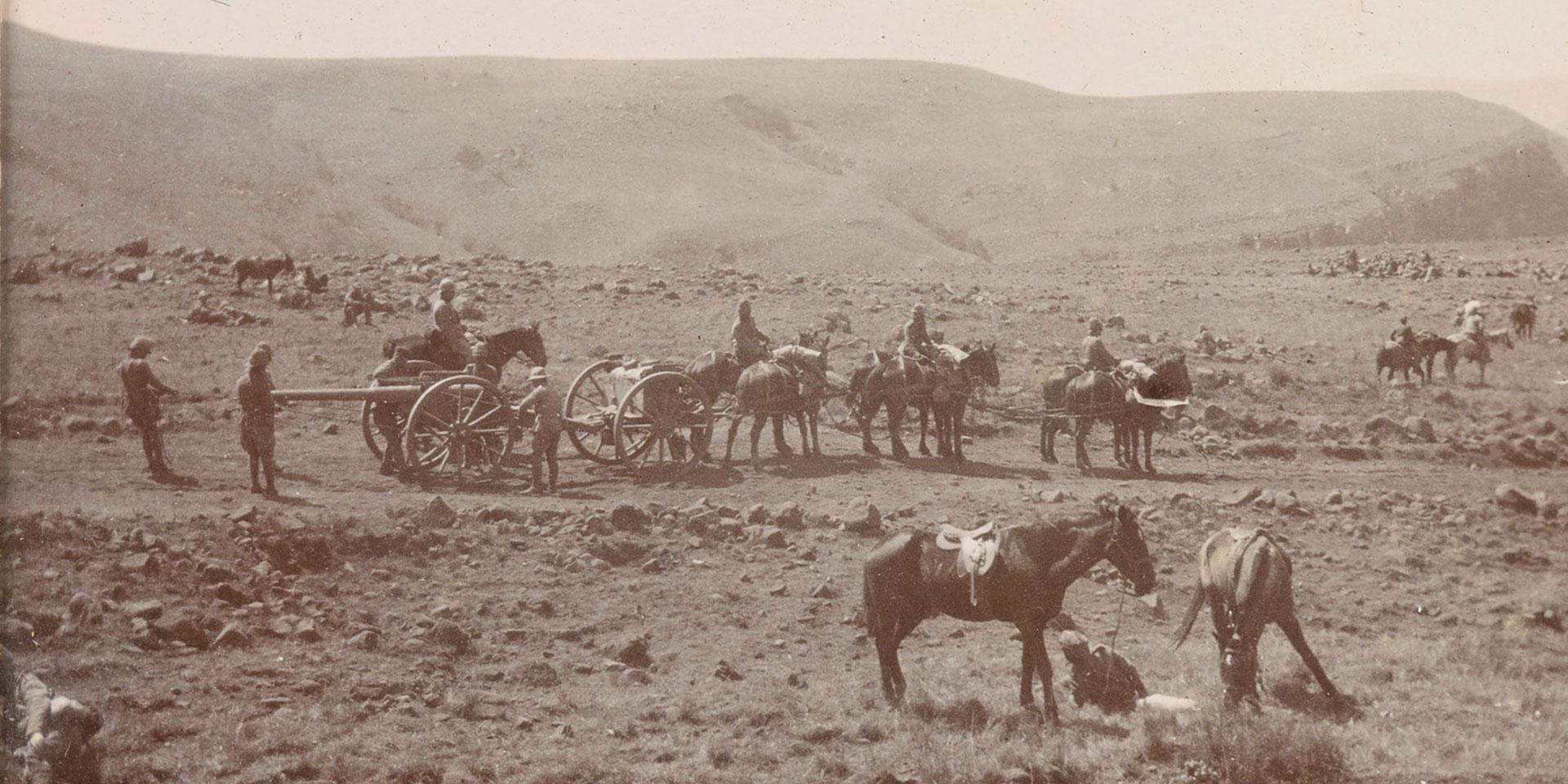 At the start of the Boer War (1899-1902), after suffering several reverses, the British responded by sending more men to South Africa. As well as regular soldiers, these included new volunteers who came forward in great numbers to serve.

The Boer War was the first campaign in which British people from all sectors of society took up arms. Many joined newly raised formations like the Imperial Yeomanry, City Imperial Volunteers or the 1st Northumberland Volunteer Battery. This was a precursor to the patriotic fervour that inspired volunteers during the First World War (1914-18).

A Royal inspection of the Imperial Yeomanry on their departure for South Africa, 1900

On 31 January 1900, the 1st Northumberland Volunteer Battery was formed. It was also known as the Elswick Battery as many of the 240 men who enlisted in it came from the Armstrong-Whitworth Elswick Ordnance Factory in Newcastle-upon-Tyne.

Valerie Susan, Lady Meux, was a flamboyant banjo-playing Egyptologist and socialite. On hearing early reports of the war in South Africa, and how effectively the Royal Navy's 12-pounder guns had been used at Ladysmith, she decided to contribute to the British war effort.

She commissioned six 12-pounder breech-loading guns from Armstrong-Whitworth. These new guns were superior in range to most of the ordinary field-guns in use by the Army. The guns were removed from a Japanese battleship, then under construction on the River Tyne, and put onto new field carriages.

At first, Lady Meux offered them to the War Office, who refused. So, she presented them instead to Field Marshal Lord Roberts, the recently appointed commander-in-chief in South Africa. Roberts is said to have persuaded War Office officials to accept the guns and allow the Elswick Battery to accompany them to South Africa.

The Elswick Battery, along with its six guns, landed at Cape Town in April 1900. It went on to serve with a force commanded by General Sir Ian Hamilton in the Orange Free State and then the Western Transvaal.

Its personnel received much praise from senior officers due to the accuracy of their shooting. They finally sailed for home on 28 June 1901.

A gun of the Elswick Battery during the advance from Lydenburg to Watervalonder, 1900

The Museum's collection includes the medals awarded to Battery-Sergeant-Major W Smith. He received one of two Distinguished Conduct Medals awarded to the Elswick Battery, and was one of the six officers and five non-commissioned officers from the unit who were mentioned in Lord Roberts’s final Boer War despatch. Additionally, two of the battery's officers were awarded the Distinguished Service Order during the campaign.

Smith also held the Second Afghan War Medal 1878-80 from his time with the Royal Artillery, and the Queen’s South Africa Medal 1899-1902, with clasps for Cape Colony, Orange Free State, Transvaal and South Africa 1901.

Where are they now?

At the end of the war, Lord Roberts kept one of the six Elswick guns and had it mounted in his garden at Ascot. It was later melted down for scrap metal during the Second World War (1939-45). Two other guns were left at Ladysmith and Cape Town in South Africa.

Another two guns were presented to Lady Meux, who mounted them outside her home, Theobald's Park in Hertfordshire. On her death in 1910, she left her home to a friend, Sir Hedworth Lambton, who had served in the Royal Navy.

In 1937, they were spotted by a visiting admiral who assumed they were the naval guns used at Ladysmith. Soon after, they were given to the Navy and moved to the shore establishment at HMS 'Excellent' in Portsmouth. From there, they were eventually presented to the Royal Artillery Museum and the National Army Museum.

The last of the Elswick Battery's guns was presented by Roberts to Eton College. In 1937, the second-in-command of the 1st Northumberland Volunteer Battery's successor unit - now known as 101st (Northumbrian) Regiment, Royal Artillery - saw the gun completely by chance.

After obtaining the permission of Lady Aileen Roberts, Lord Roberts’s daughter, the college subsequently returned the gun to the regiment. To this day, it remains in Northumberland with 203 (Elswick) Battery, Royal Artillery.

Guns of the Elswick Battery during the advance from Lydenburg to Watervalonder, 1900 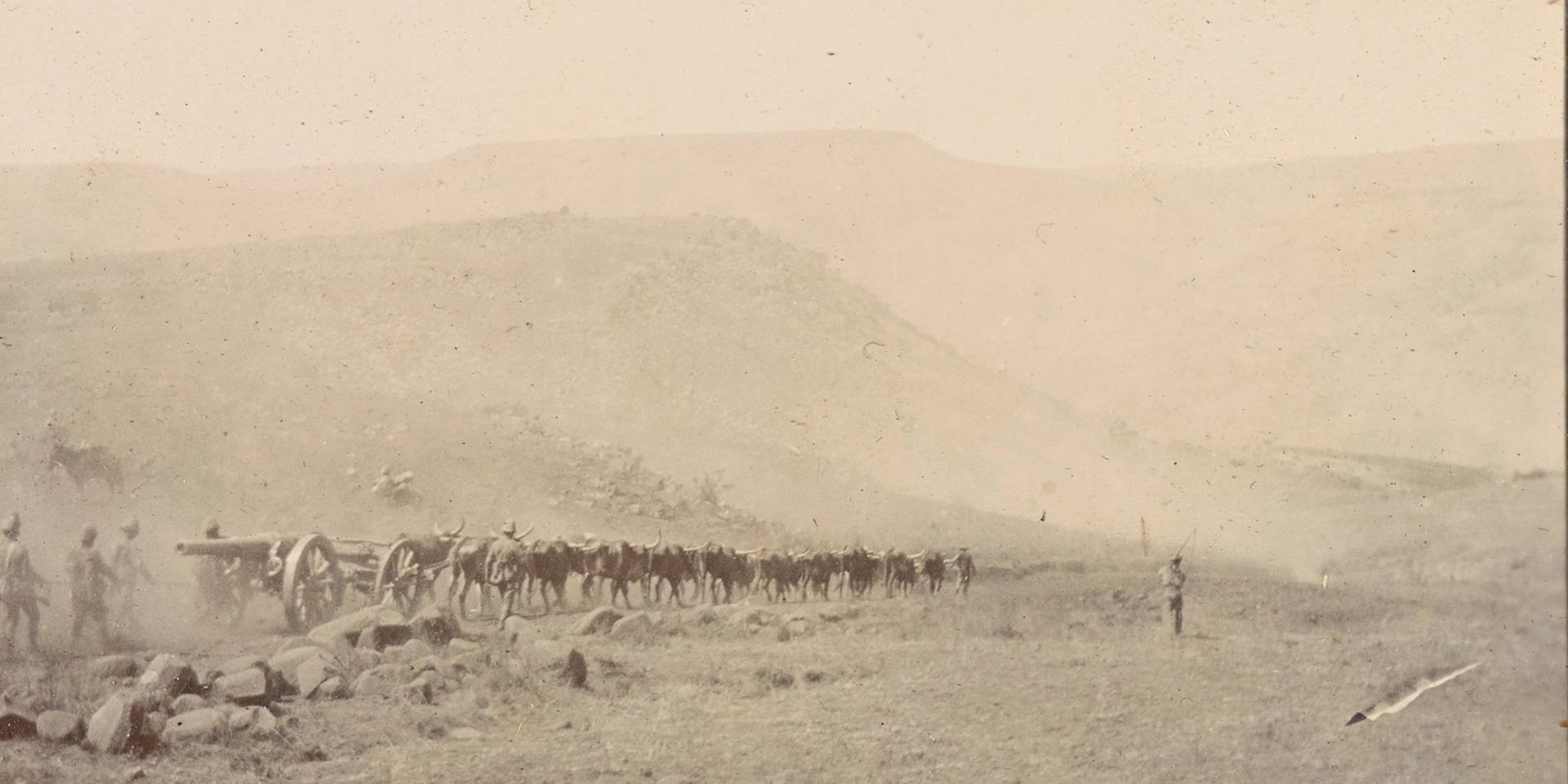 Guns of the Elswick Battery during the advance from Lydenburg to Watervalonder, 1900