In the summer of 1940, the Germans defeated France and drove the British out of Western Europe. Hitler had quickly accomplished what his First World War predecessors had failed to do in four years. After evacuating from Dunkirk, and with their war strategy in ruins, the British found themselves alone and threatened with invasion. 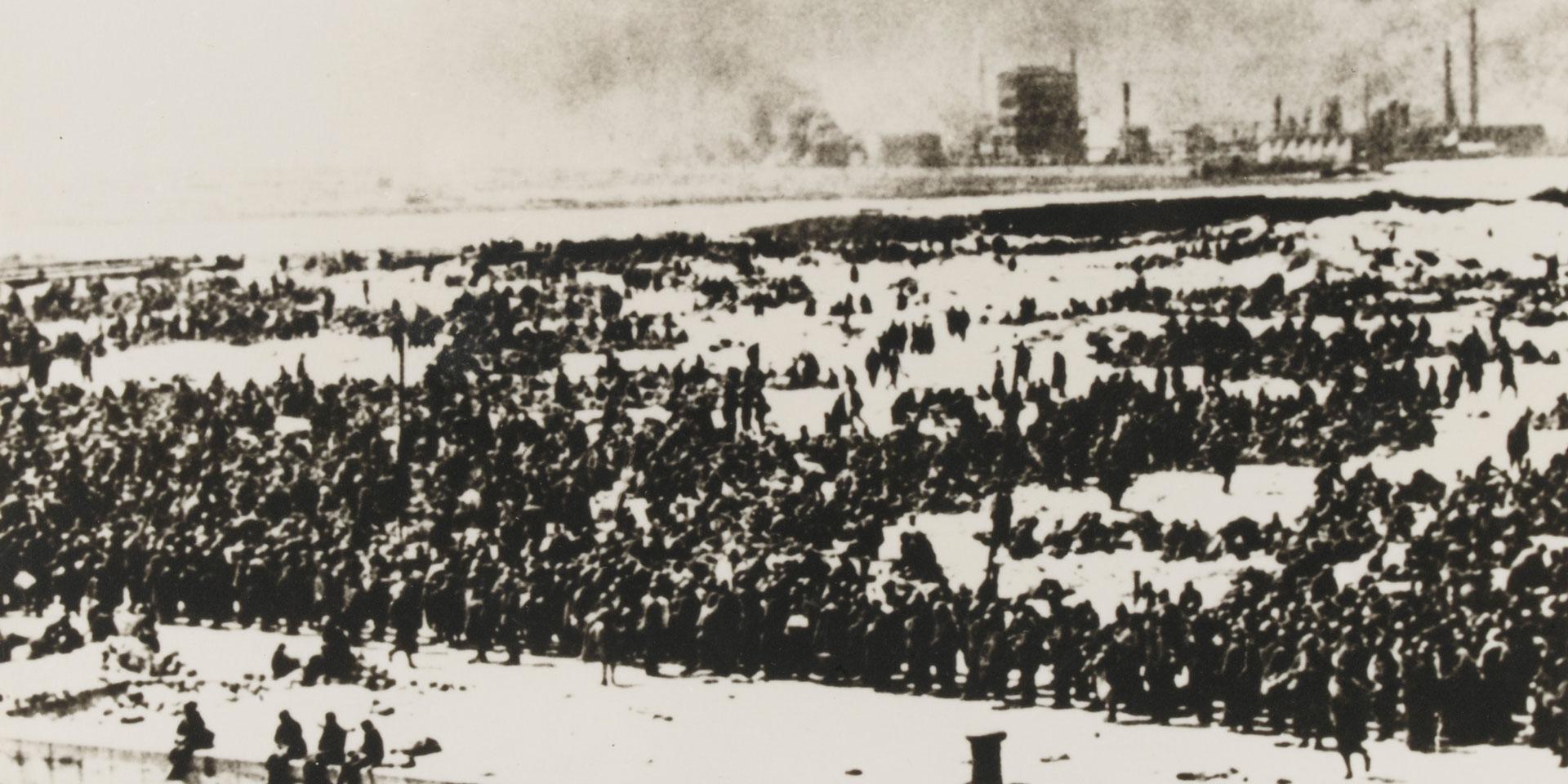 When Adolf Hitler came to power in 1933, he promised to reverse the terms of the Treaty of Versailles - signed in 1919 in the aftermath of the First World War - and reassert Germany's dominance of Europe. Rearmament began almost immediately and the German army, navy and air force expanded.

Seeking to reclaim lost territory, his troops re-occupied the Rhineland in 1936. In March 1938, German troops entered Austria to carry out the Anschluss (unification) of the two German-speaking countries. The French and British governments did nothing to stop these actions.

In 1938, Hitler demanded that the German-speaking part of Czechoslovakia, the Sudetenland, be annexed to Germany. Fearful of a war for which they were unprepared, Britain and France adopted a policy of 'Appeasement'.

They agreed to a deal with Germany at Munich in September 1938, brokered by the Italian dictator Benito Mussolini. The Sudetenland was occupied by Germany and, shortly afterwards, the whole of Czechoslovakia was seized.

Finally accepting that Germany could not be appeased, Britain and France stepped up their military preparations and rearmament programmes. They also gave public guarantees to Poland, Hitler's next target.

To meet their Continental commitment to the French, the British also expanded the Army. In March 1939, it was announced that the Territorial Army would be doubled in size to 340,000 men.

The Military Training Act of May 1939 compelled all British men reaching the age of 20 to serve in the armed forces for six months, with a further three and a half years in the reserve. This was followed by the National Service Act in September 1939, which required all men aged 18 to 41 to serve.

By the end of 1939, more than 1.5 million men had been conscripted to join the armed forces. Of those, just over 1.1 million went to the Army. The rest were split between the Royal Navy and the Royal Air Force.

After signing a non-aggression pact with the Soviets, Hitler demanded territorial concessions from the Poles. These were refused and the Germans attacked on 1 September 1939. Two days later, Britain and France declared war. The Second World War had begun.

The German advance into Poland, 1939

On the eve of war, the British Army comprised 750,000 trained regulars and reservists in 50 regular and Territorial divisions. These divisions were stationed throughout the world. Over 50,000 soldiers were based in India and garrisons east of Suez.

The British Expeditionary Force (BEF) dispatched to France in 1939 consisted of only 10 divisions. This was relatively small compared with the other combatants. But the British could also draw on additional divisions from Australia, Canada, South Africa, West Africa, East Africa and New Zealand. There were also around 200,000 men of the Indian Army stationed on the Indian subcontinent.

During the 1920s and 1930s, British and French strategic concepts had stagnated. The generals expected to fight a future war in which defence rather than attack would dominate. They believed that set-piece battles would develop slowly and be dominated by infantry and artillery.

The two Allies put their faith in the Maginot Line, France's heavily fortified border with Germany. Ignoring the lessons learnt during the Western Front battles of 1918, tanks and aircraft were largely cast in a supporting role.

German strategic thinking contrasted greatly with this. They emphasised quick decision-making, speed of manoeuvre and decentralised action by armoured units with motorised infantry and air support.

The Germans went to war with fewer tanks than the Allies, but concentrated them in powerful armoured formations rather than dispersing them. Although there were Allied officers who realised that a new form of warfare was possible, no sustained effort had been made to apply these doctrines in a similar way to the Germans. 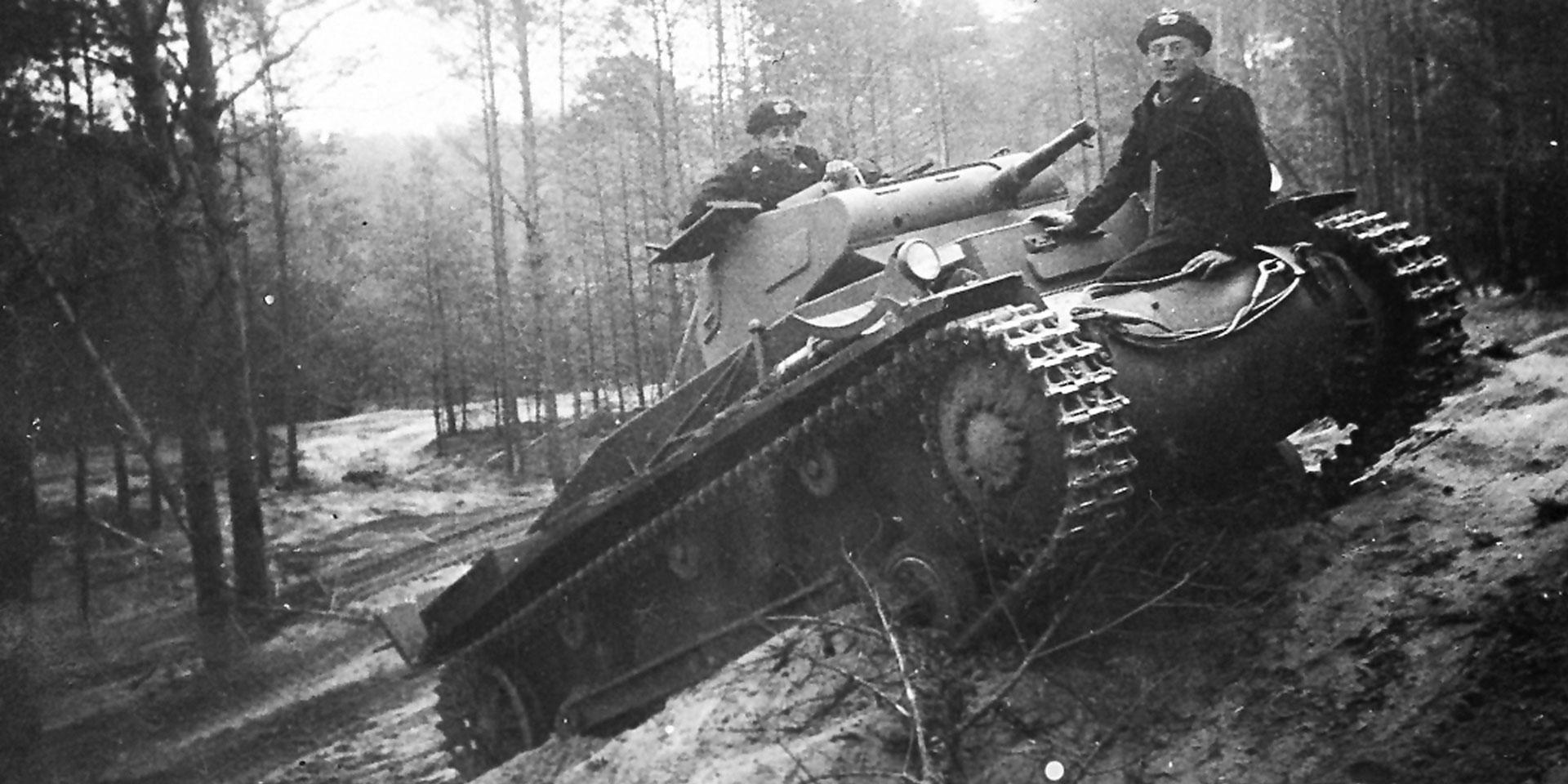 It spent the next seven months training through a bitter winter in readiness for action.

By May 1940, it had been built up to over 390,000 men. This consisted of five regular and five Territorial divisions stationed on the Belgian frontier where, as in 1914, the main German attack was expected.

Confident in the strength of the Maginot Line, the Allies were happy to remain on the defensive. Apart from a limited advance in the Saar area, they largely restricted themselves to dropping propaganda leaflets on the German civilian population.

Rather than giving direct military assistance to Poland, they put their faith in a policy of economic blockade that would slowly wear Germany down. This period was later nicknamed 'the phoney war'.

On 9 April 1940, Germany invaded Norway in order to secure its iron-ore supplies. Hitler also wanted to use Norway as a base for naval operations against the Allies. The country was quickly overrun, the Germans using their airpower and paratroopers to secure key centres and defeat the weak Norwegian forces.

British and French troops then landed in the centre and north of the country around Narvik, Aandalsnes and Namsos. However, they were too few in number and too poorly equipped to resist the Germans. By the beginning of June, the position was hopeless and Anglo-French forces were evacuated.

‘We disembarked at Harstad, which was just south of Narvik… After landing we were bombed… and the decks were machine-gunned... I think we lost maybe 20 men…The ship caught fire and we evacuated… We were fitted out with new kit and then went by truck with No. 2 Company on a high mountainside of 3500 feet, and I remember climbing that. Now, the rest of the battalion were under heavy fire. They were overrun, but extricated themselves… It was cold, particularly at night, searing cold. And then we marched 30 odd miles… I had a lot of blisters on my feet… eventually we joined the battalion only to be separated again because they decided that the whole thing would be evacuated and we went to a place called Bodo, where... we sailed off and in due course we landed in the Orkney Islands.’ Colonel J Kelly recalling his service in Norway with The Irish Guards, 1989

On 10 May 1940, the Germans invaded the Netherlands, Belgium and Luxembourg. Using the 'Blitzkrieg' techniques of fast moving armoured formations supported by ground-attack aircraft, mobile artillery and mechanised infantry, they quickly overwhelmed the Dutch and Belgian armies.

The Germans seized the initiative from the outset, capturing the key Belgian fort of Eban Emael with a daring airborne operation.

The British and French forces had moved into Belgium to meet the attack. However, the main German effort was directed further south. General Gerd von Runstedt's Army Group A, with 38 infantry and seven armoured divisions, advanced through the forests of the Ardennes, considered impassable by the Allies.

Although many French units fought bravely, there was little to stop the Germans. The best Allied formations were engaged in Belgium and there was no centrally placed strategic reserve to respond to the new threat.

German tanks crossed the River Meuse at Sedan on 13 May 1940, outflanking the Maginot Line. Breaking through the weak French forces there, they raced towards the channel coast, reaching Abbeville on 19 May and cutting off the Allied troops in Belgium. On the same day, an improvised counter-attack southwards by British tanks temporarily halted the 7th Panzer Division at Arras.

But on 26 May, with the Germans pressing northwards and Belgian resistance collapsing, Lord Gort was ordered to evacuate through Dunkirk as much of the BEF as he could.

‘Anybody who has been bombed by a German Stuka doesn’t like it. They screamed down with their awful sirens going, bombing and firing tracer ammunition on the refugees who were flooding the roads. It was a most appalling sight which I shall never forget.' Colonel Sir Thomas Butler, The Grenadier Guards, recalling the retreat to Dunkirk, 1940 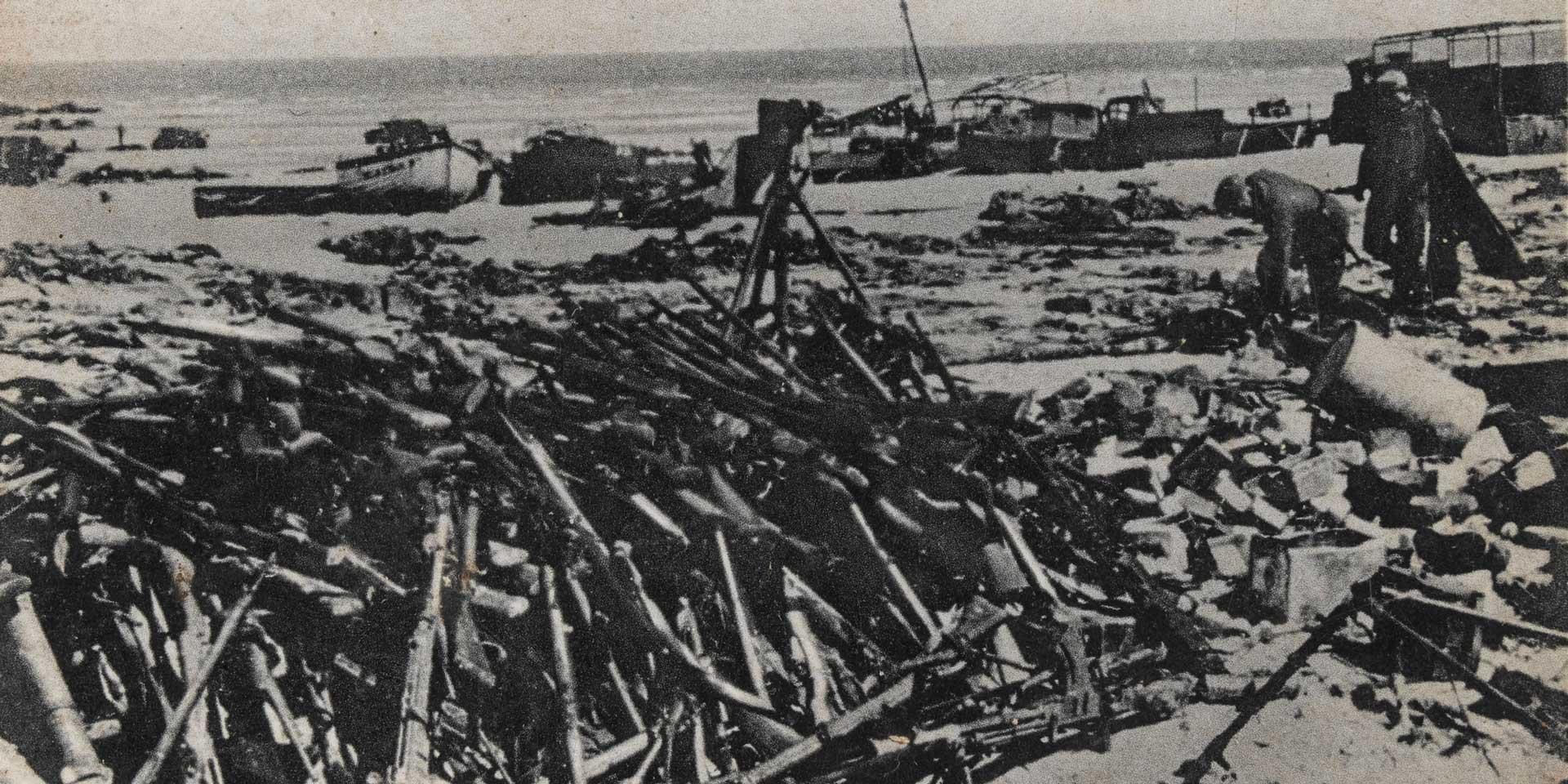 By 3 June 1940, despite intensive bombing and artillery fire, 328,000 Allied troops had been taken off the Dunkirk beaches and shipped back to England. This was partly due to the efforts of the Royal Navy and hundreds of civilian ships that had crossed the Channel.

It was also due to dogged rearguard actions at Boulogne, Calais and elsewhere, which bought additional evacuation time. The BEF also benefited from Hitler's order on 24 May that his tanks should halt. At the time, the German 1st Panzer Division was only 24km (15 miles) from Dunkirk.

‘It was dusk by the time we reached Dunkirk and we could see the fires blazing fiercely, buildings silhouetted in the red glow, it looked frightening… the troops could be seen in lines like dark snakes extending down into the sea itself, they appeared to be wading out to small boats some distance out from the water’s edge. In front of us too, small boats were picking up men off the beach and taking them out to ships waiting offshore.'
Gunner Allan Barratt, Royal Artillery, 1940

On 5 June 1940, the Germans launched a new offensive from their positions on the Somme. After two days of fierce fighting, they broke through towards Rouen and on 9 June they crossed the River Seine. The same day, the Germans attacked on the Aisne and eventually swung towards Switzerland, cutting off the thousands of soldiers still holding the Maginot Line.

The 51st (Highland) Division, which had not been trapped at Dunkirk with the rest of the BEF, was surrounded at St Valéry-en-Caux in Normandy and surrendered on 12 June. The next day, Paris was declared an open city, abandoning all defensive efforts. Eight days later, a new French government under Marshal Philippe Pétain sued for peace.

‘We must be very careful not to assign to this the attributes of a victory. Wars are not won by evacuations.’ Prime Minister Winston Churchill, June 1940

Hitler's failure to completely destroy the BEF allowed the nucleus of an army to be saved at Dunkirk. A further 140,000 Allied troops were brought out through Cherbourg and Brest. Nevertheless, the BEF had suffered 68,000 casualties. Most of its equipment was lost, including 64,000 vehicles, 20,000 motorcycles and 2,500 guns. Britain had also lost its main ally and now stood alone.

In under seven weeks, and at a cost of only 156,000 casualties, Germany had conquered the Netherlands, Belgium and France. The British had been ejected from Western Europe. And it would be four long years before they returned.