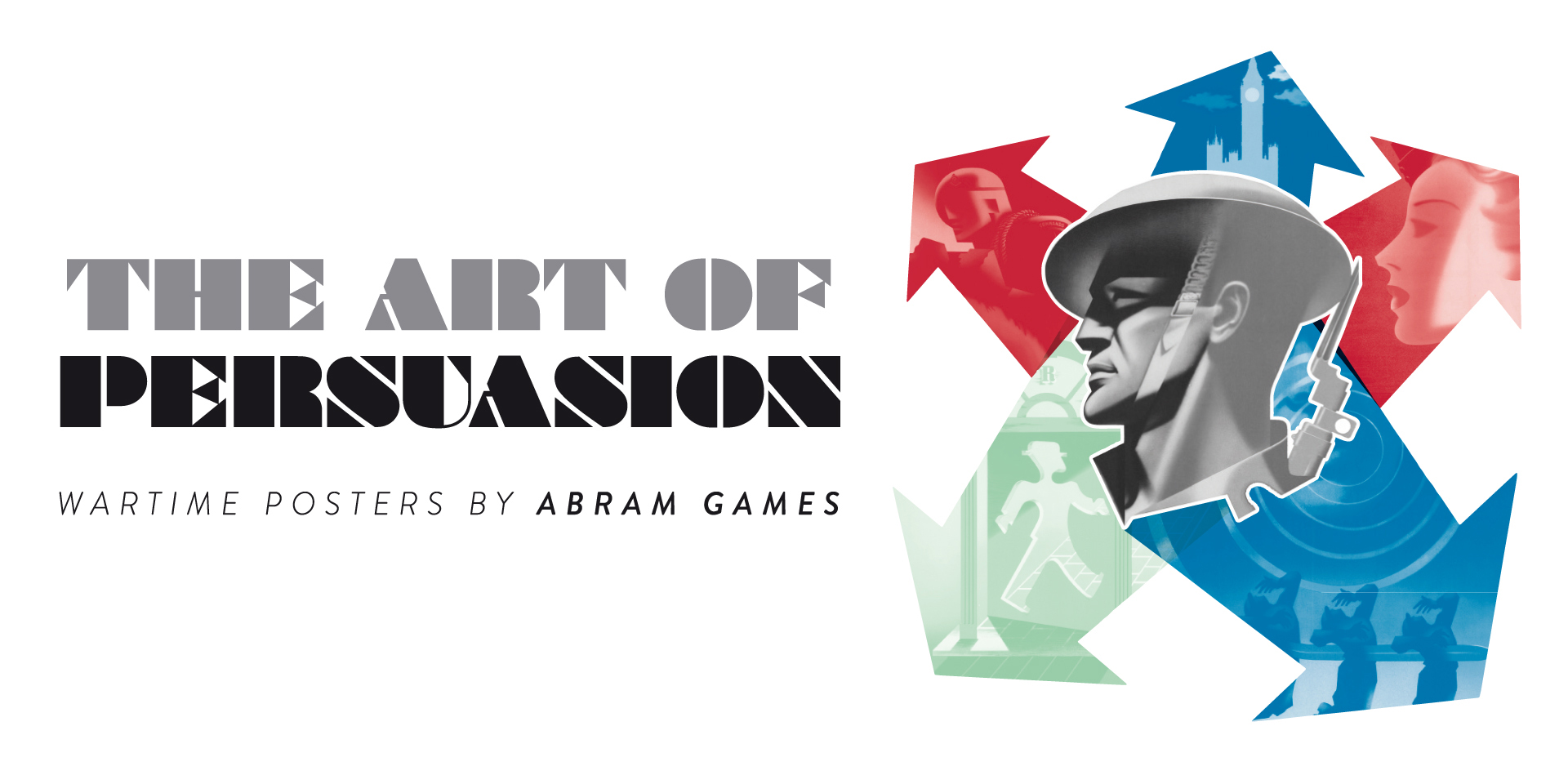 'The art of persuasion: Wartime posters by Abram Games' is a major retrospective of the pioneering work of graphic artist Abram Games, opening at the National Army Museum on 6 April 2019.

The show presents over 100 posters Games created during his employment as a poster artist for the Public Relations Department at the War Office from 1941 until 1945. The exhibition explores how his Jewish refugee heritage, experiences as a soldier and the turbulent politics of wartime Britain shaped the career of a man who continues to influence design industry professionals today.

At a time of immense social unrest, after the 'war to end all wars' had left hundreds of thousands of veterans and civilians on the poverty line, the country was to embark on a second world war with National Service an unthinkable necessity.

Abram Games, a staunch socialist who had himself joined the Army in 1940, saw an opportunity to communicate ideas which might help win the war, as well as bring about social change in Britain. He did this by creating posters that recruited, educated, informed and influenced soldiers and civilians alike.

The exhibition explores his masterful use of the airbrush, a limited colour palette, bold hand-rendered typography and often stark imagery, in covering difficult subjects like saving lives and censorship. It also examines the impact Games has had on graphic design in the modern world through his innate understanding of the human ability to consume essential information. Leading with a mantra of 'maximum meaning, minimum means', Games was the master of reductive design.

'The art of persuasion' examines the tools and techniques Games used to communicate his messages effectively, with particular attention to his dexterity and innovative use of the airbrush. Always direct and occasionally courting controversy, his wartime posters marked an important progression in British graphic design. This year, and in conjunction with the exhibition opening at the National Army Museum, English Heritage will commemorate Games with a blue plaque.

Naomi Games, daughter of Abram Games, speaking on behalf of The Estate of Abram Games said, 'We are delighted that our father's war work will be exhibited at the National Army Museum. He was proud to be a Londoner and a member of the British Army. It is fitting that the work of the only ever War Poster Artist is exhibited at the Museum.'

The exhibition will include posters from the Museum's collection alongside loans from the Estate of Abram Games. His painting smock and palette, airbrush and school report will be displayed alongside the sealed pattern of his cap badge design for the Royal Armoured Corps and his iconic posters: Join the ATS ('the blonde bombshell'), Your talk may kill your comrades, and Your Britain fight for it now, among others.

Visitors will be able to test their own artistic prowess through a digital interactive, harnessing Games's distinct style. A public programme will run throughout the exhibition with study evenings, curator-led, as well as British Sign Language tours, creative workshops, an academic conference on propaganda and a Blitz-themed evening of jive.

Justin Maciejewski, Director of the National Army Museum, states: 'The work of Abram Games as a graphic designer and British soldier in support of the causes of freedom and social justice during the Second World War is remarkable and inspiring, and we are proud to be showing the full body of his work as the Army's poster designer.'

About the London Blue Plaques Scheme

The London-wide blue plaques scheme has been running for 150 years. The idea of erecting 'memorial tablets' was first proposed by William Ewart MP in the House of Commons in 1863. It had an immediate impact on the public imagination, and in 1866 the (Royal) Society of Arts founded an official plaques scheme. The Society erected its first plaque - to poet, Lord Byron - in 1867. The blue plaques scheme was subsequently administered by the London County Council (1901-65) and by the Greater London Council (1965-86), before being taken on by English Heritage in 1986.
https://www.english-heritage.org.uk/visit/blue-plaques/