1916 witnessed two of the longest and most notorious battles of the First World War (1914-18). These two bloody struggles resulted in hundreds of thousands of casualties for both the Allies and the Germans on the Western Front. 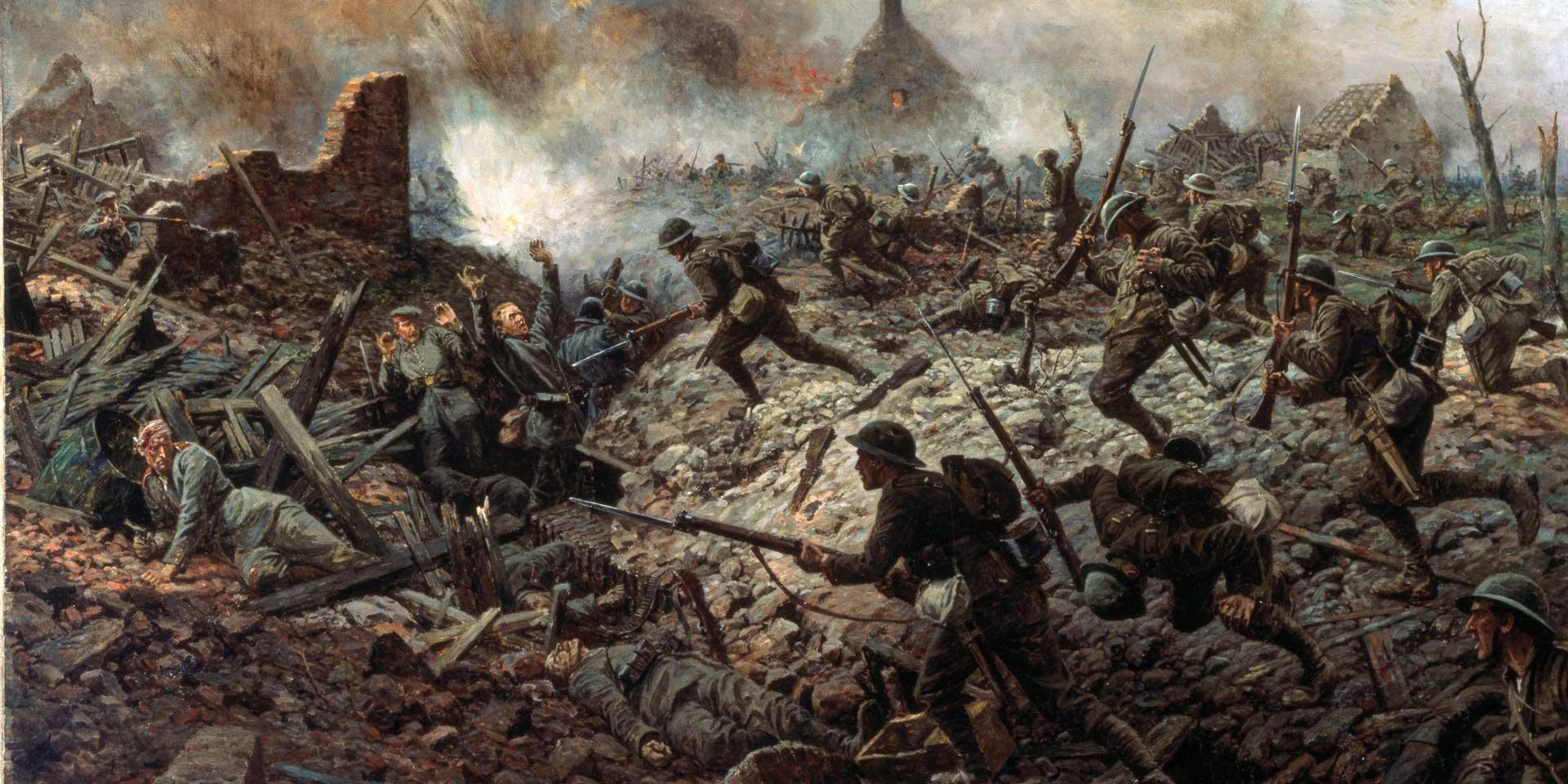 The Allied plan for 1916 was for the British to support the French in a major summer attack along a 40-kilometre (25 mile) front north and south of the River Somme in northern France.

This would coincide with attacks by Russia and Italy elsewhere. Unfortunately, this plan was interrupted by events to the south-east on the River Meuse.

Believing that no general breakthrough was possible on the Western Front, the German plan for 1916 opted instead for a limited advance in the Verdun area.

By taking territory important to the French defenders, they hoped to instigate large-scale counter-attacks. These would then fall victim to massed German artillery. The German Chief of Staff, General Erich von Falkenhayn, believed this strategy would ‘bleed the French white’.

Falkenhayn hoped that the operation might also force the Allies to launch ill-prepared counter-offensives elsewhere. The defeat of these might allow a return to mobile warfare or even force the exhausted enemy to negotiate a political settlement.

French soldiers shelter in trenches on Hill 304 at Verdun, 1916

Mill on the Meuse

On 21 February 1916, the Germans attacked Verdun in what became the longest battle of the war. Nicknamed 'the mill on the Meuse', Verdun lasted for over nine months and was one of the bloodiest engagements in history.

But Falkenhayn had overestimated the Germans’ ability to inflict disproportionate losses. Instead, his men found themselves in a battle of attrition that wore them down as much as the French. The Germans sustained around 330,000 casualties during the battle. French losses exceeded 370,000.

A battalion of the 103rd (Tyneside Irish) Brigade advance on La Boisselle, 1 July 1916 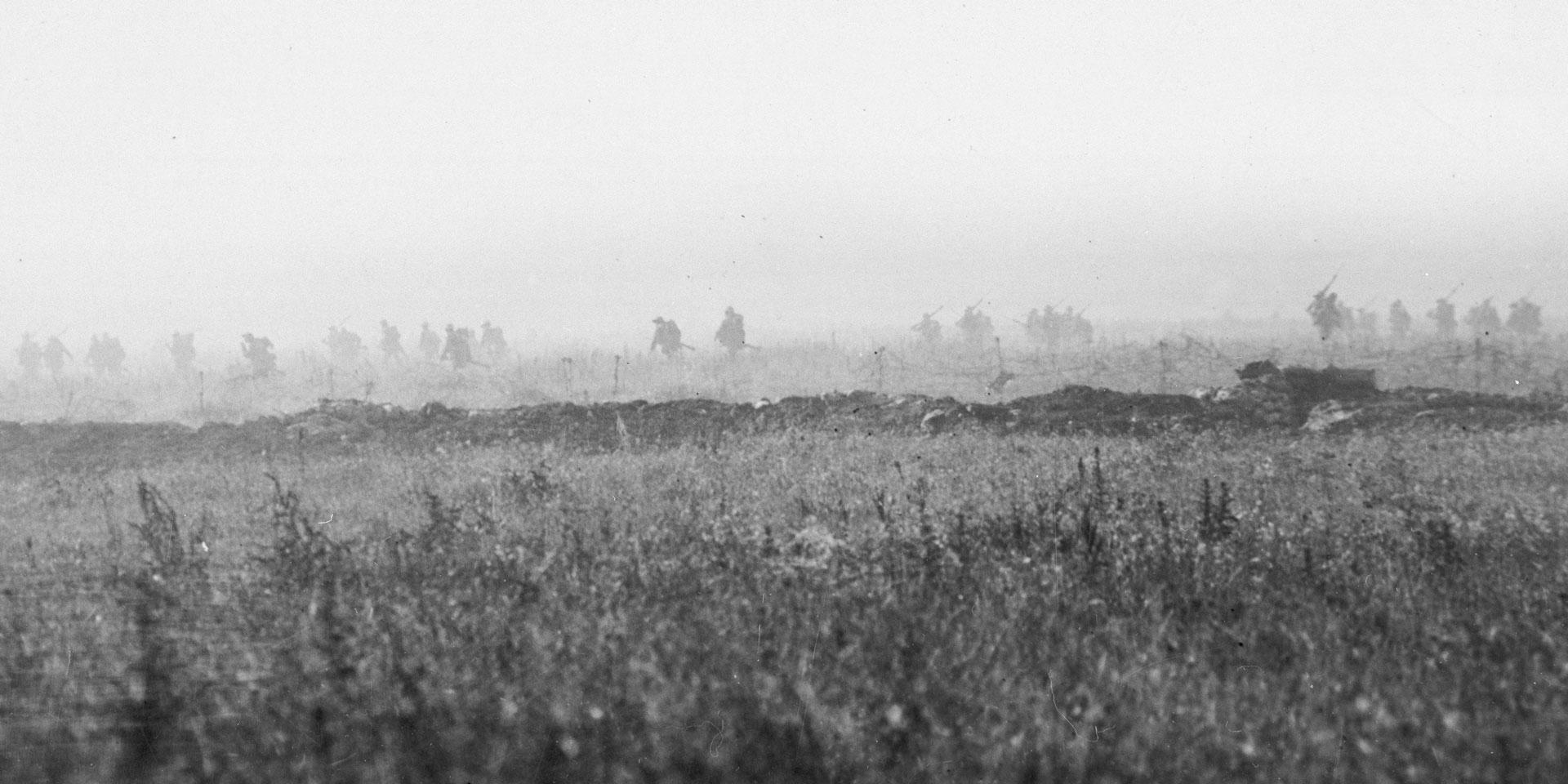 A battalion of the 103rd (Tyneside Irish) Brigade advance on La Boisselle, 1 July 1916

In order to relieve the pressure on the French, the Somme offensive was launched earlier than planned with the inexperienced 'New Armies' providing the bulk of the troops involved. The French would still attack in the south, but the desperate situation at Verdun reduced their role in the operation.

On 24 June 1916, a preliminary bombardment began which was to last for seven days. General Sir Douglas Haig’s artillery was expected to destroy German defences and guns, and cut the barbed wire in front of the enemy lines. When the attack began, it would provide a creeping barrage behind which the infantry could advance.

The British believed their opponents would be so shattered by this bombardment that the infantry would simply have to walk over No Man’s Land and occupy the German trenches.

But the British had overestimated the power of their artillery. The guns were too thinly spread for the task in hand. And although they fired 1.5 million shells, two thirds of them were shrapnel, which threw out steel balls when they exploded. While devastating against troops in the open, shrapnel was largely ineffective against concrete dugouts and the men sheltering in them.

Furthermore, it has been estimated that around 30 per cent of the shells failed to explode. As a result, the German defences were not destroyed and in many places the barbed wire remained uncut.

The bombardment of Longueval viewed from Montauban, July 1916 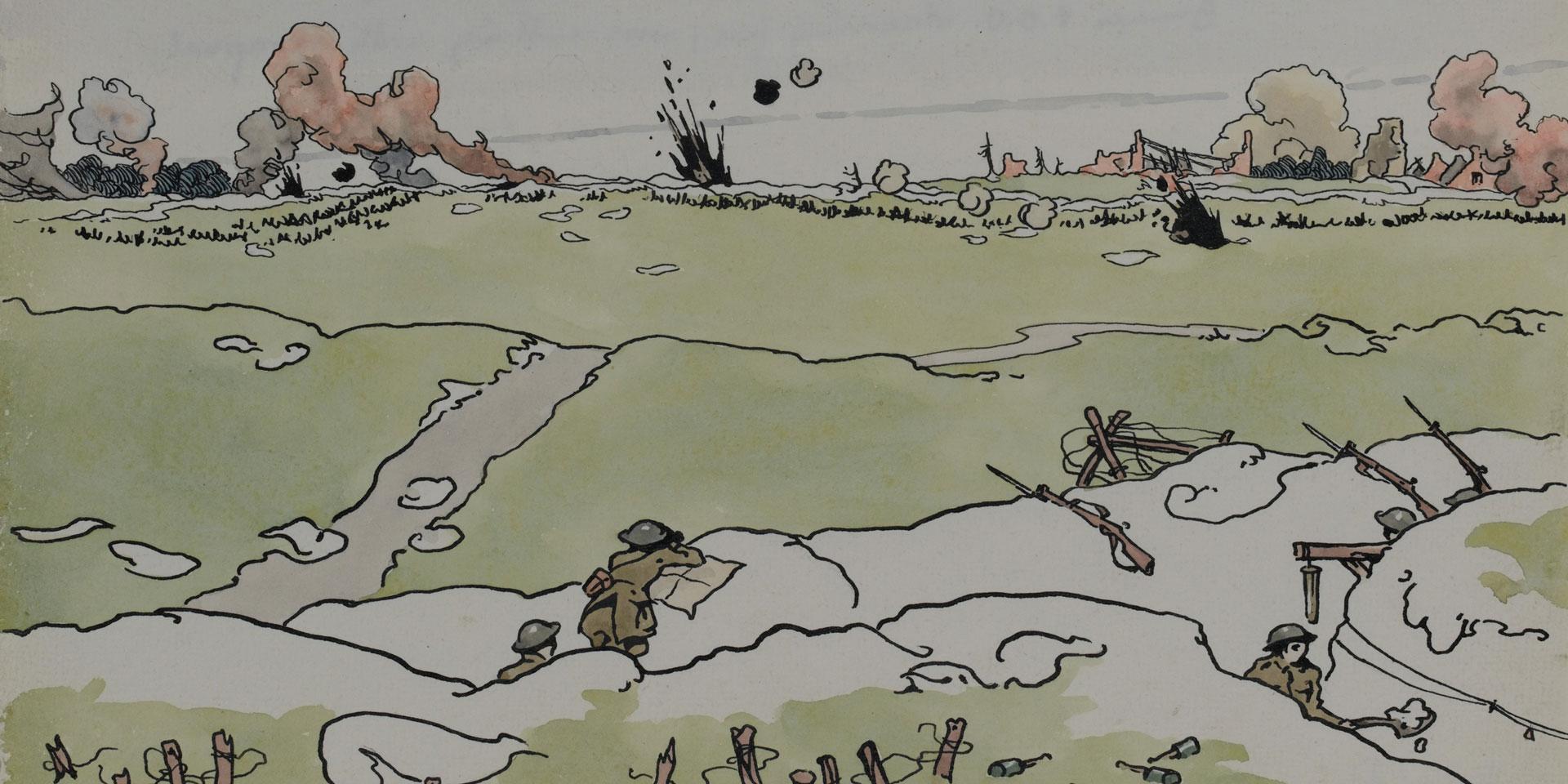 The bombardment of Longueval viewed from Montauban, July 1916

At 7.30am on 1 July 1916, 14 British divisions attacked. In most cases they were unable to keep up with the artillery barrage that was supposed to take them through to the German trenches. This gave the Germans time to scramble out of their dugouts once the barrage had lifted, man their trenches and open fire.

Haig’s infantry were welcomed by a storm of machine-gun, rifle and artillery fire. They suffered nearly 60,000 casualties during the day.

Although the French had made good progress in the south and there had been some local successes, in most places the attack had been a bloody failure. But with the French still under pressure at Verdun, there was no question of calling off the offensive.

Bringing in a wounded man after the assault at Beaumont Hamel, 1 July 1916

‘As soon as our leading wave left our trenches to assist it was caught by heavy machine gun fire and suffered heavy losses. As soon as the succeeding waves came under this fire they doubled forward and before anyone reached the German front line the original wave formation had ceased to exist.’
War Diary of 2nd Battalion The Duke of Cambridge’s Own (Middlesex Regiment), 1 July 1916

More attacks were mounted between 3 and 13 July, and a further 25,000 men were lost. But gradually, the British tactics improved.

On 14 July, four British divisions made a dawn attack on Longueval Ridge. Supported by an intense artillery bombardment, they caught the Germans by surprise and by mid-morning they had captured the ridge.

Attacks continued through the summer, mostly on a series of individual objectives, with the Germans frequently mounting counter-attacks of their own. The ‘Big Push’ became a slow, grinding struggle of attrition. 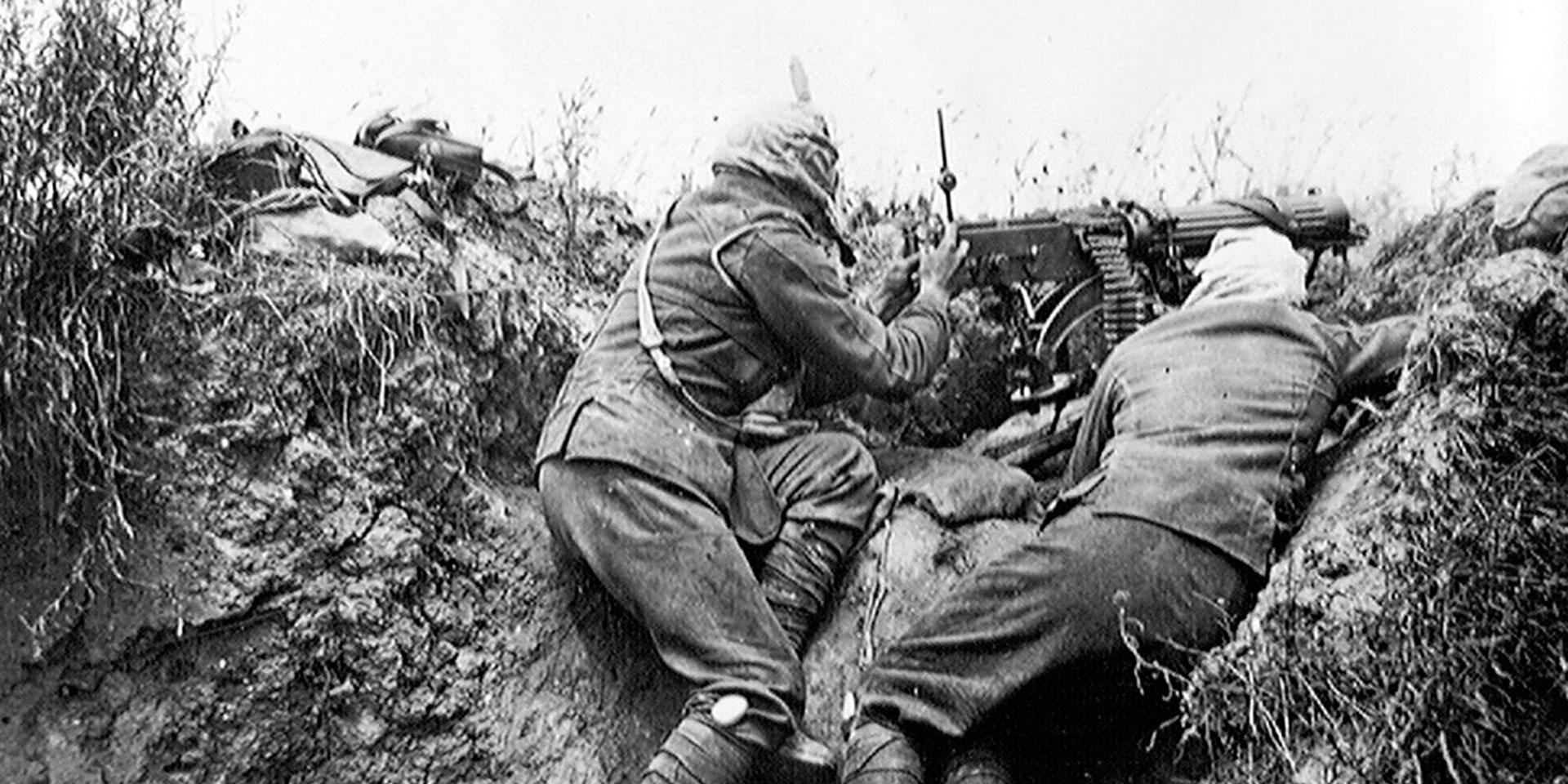 ‘The casualties have of course been heavy and the figures look large, but when one considers that... 29 Brigades (about 100,000 men) were taking part in the first assault the percentage is not so high… I cannot speak too highly of the spirit and self-sacrifice of the rank and file. It speaks well of the courage of the New Armies, but had they had more time to devote to training they would have been able to hold on to many points from which they were driven by a few enterprising German machine-gunners.

We are not too well off for ammunition for our heavy howitzers and we require more heavy trench mortars, which have performed invaluable service to the French in this attack. I was promised 200 of these but have only received 25. We are going to beat the Germans by heavy howitzers and trench mortars as they... will smash him in his deep dug outs… Anyhow we have shown the Bosche that we can rush his line on a wide front and I think we shall penetrate the second line if the ammunition holds out. Above all we have helped the French immensely by relieving the pressure on Verdun’. Letter from Lieutenant-General Sir Henry Rawlinson, British Fourth Army commander, to a colleague, 3 July 1916

In some areas the battle became a slogging match that lasted for months. Typical of this type of fighting was the struggle for Delville Wood.

On 14 July 1916, the 1st South African Brigade - 3,153 officers and men - entered Delville Wood as an extension of operations around nearby Trones and Bernafay Woods. After six days of vicious fighting in hellish conditions, only around 750 officers and men remained unharmed.

Troops of many regiments continued the struggle until September. All suffered huge casualties. The wood was subsequently nicknamed ‘Devil’s Wood’ by the Allies.

On 15 September, the British used tanks for the first time in battle, in support of an attack on Flers-Courcelette. They advanced about 2km (1.5 miles), but no breakthrough was made.

Soldiers in the trenches at Thiepval Wood, August 1916

Tanks prior to going into action at Flers, 15 September 1916

The strength of the Anglo-French offensive on the Somme surprised Falkenhayn and limited his men's response there to holding on to positions as best they could. The losses sustained rendered his strategy of launching any counter-strike against an exhausted enemy redundant.

In August 1916, Falkenhayn resigned. He was replaced by General Paul von Hindenburg and General Eric Ludendorff.

They believed the losses at Verdun and the Somme had depleted the offensive capabilities of the German Army. In the west, it would have to go over to the strategic defensive for 1917. Germany and its allies would focus their offensive attentions elsewhere.

During the Somme fighting and through the winter months, the Germans built a formidable new defensive system called the Hindenburg Line. It ran from Arras to Laffaux near Soissons on the River Aisne.

In the spring of 1917, they retreated to this new position, which shortened their front and freed up divisions for use elsewhere. 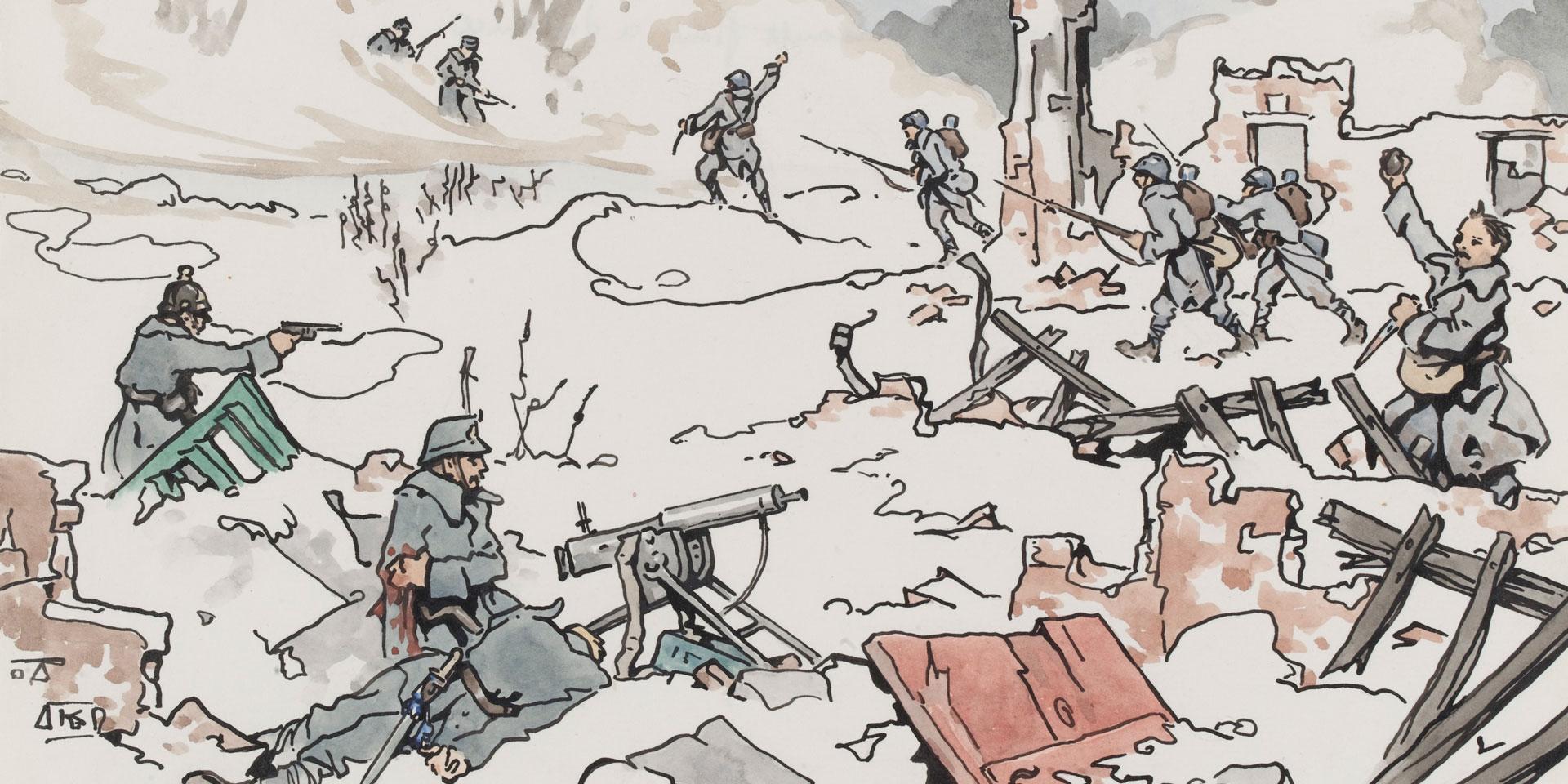