Danny Groves served as a mortar section commander with the Royal Irish Regiment in Afghanistan in 2006. At Musa Qala, he was embroiled in one of the Army’s most intense and gruelling sieges of recent times. 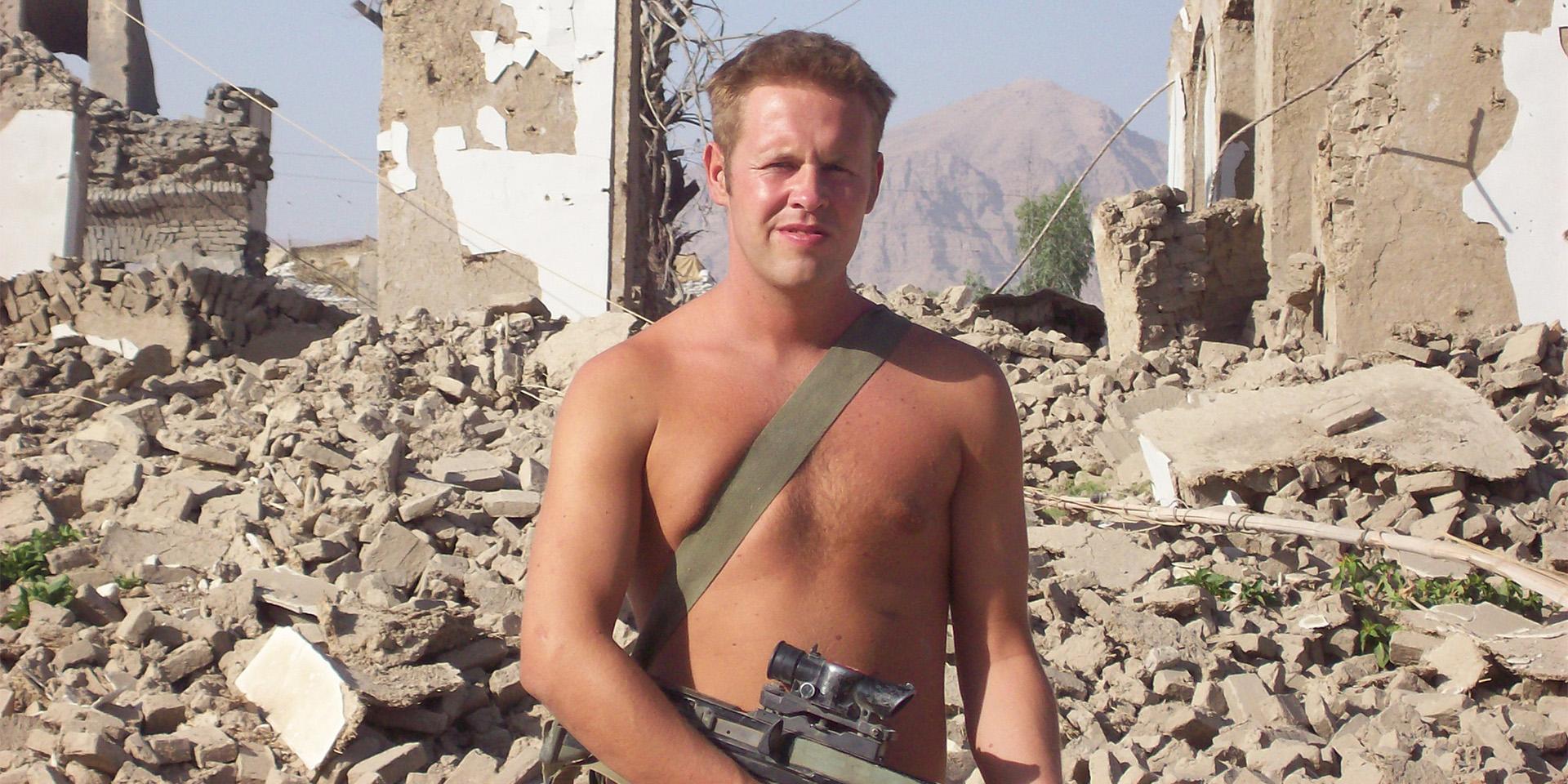 In February 2000, Danny Groves was working as a landscape gardener in Birmingham. After a bad day at work, he took the life-changing decision to join the Army.

This wasn’t entirely out of the blue as he had long held an interest in the military. His mother had told him about an uncle who had died serving with the Parachute Regiment. And he was conscious of his grandfather's hope that one of his family would serve.

But this momentous career choice also reflected his own personal desire to, in his own words, ‘make a difference’.

Groves joined 1st Battalion, the Royal Irish Regiment, and trained as a mortar specialist. His first deployment was a six-month tour in Northern Ireland in 2001.

Two years later, he took part in the invasion of Iraq. Under the command of Lieutenant Colonel Tim Collins, 1st Royal Irish was involved in the opening phase of the ground attack in March 2003.

After that, Groves served in a specialist reconnaissance team, the Close Observation Platoon, followed by a further tour in Iraq, this time posted to Basra and Baghdad.

Lieutenant Colonel Tim Collins, 1st Battalion The Royal Irish Regiment, talking to his soldiers prior to the invasion of Iraq, 2003

‘But if you are ferocious in battle, remember to be magnanimous in victory.’ Lieutenant Colonel Tim Collins, 2003

In 2006, Groves was deployed to Helmand Province, Afghanistan. The British had been fighting in Afghanistan as part of a multi-national coalition since 2001, following the devastating '9/11' attacks on the United States mounted by the terrorist organisation Al Qaeda.

The coalition’s primary objective was to destroy Al Qaeda, who were using Afghanistan as a base. However, they also sought to overthrow the Taleban - a brutal Islamic fundamentalist regime which ruled Afghanistan - and to rebuild the country, which had been shattered by decades of war.

Helmand became the focal point of British operations in Afghanistan in 2006. Here, British forces saw some of the fiercest fighting of modern times. The province became notorious as one of the most dangerous and difficult theatres of war and was nicknamed ‘Hell-land’ by the troops.

‘The Helmand, or Hell-land as commonly referred to, was renowned for being one of the most dangerous territories in world. Ruled by drug lords, gangsters and smugglers, it stank of corruption and harboured the remnants of the notorious hardcore Islamic fundamentalists "The Taliban".’ Danny Groves, from his journal, ‘The Story of Easy Company: Band of Musa Muckers’, 2006

Arriving at the end of July, they were called into action seven days later to help relieve the remote outpost of Musa Qala, where a mixed force of British and Danish troops had been under siege for several weeks.

Their first objective was to break through to the garrison. This was no easy task. A previous effort, Operation Nakhod, had failed with significant loss of life.

Groves and his mortar team helped to secure a landing zone on the outskirts of Musa Qala for the main body of the relief force. They then unleashed their fire on the area surrounding the town that was known to be occupied by the Taleban.

Combined with heavy air support, this enabled the relieving force to break through to the compound without loss. However, one soldier - Private Andrew Cutts - was killed later on when the force withdrew.

Soldiers from 3 Para, take up positions near Musa Qala, 6 August 2006

The Musa Qala compound comprised a series of cement-and-mud buildings surrounded by a 10-foot wall. The coalition force had been deployed there as part of a ‘Platoon House’ strategy, by which they hoped to assert their control over the province by occupying a series of fortified positions in key areas. This approach has since been criticised on the basis that it left forces over-stretched, isolated and vulnerable.

The precarious nature of the situation in Musa Qala was certainly appreciated by the men garrisoning the compound. Its tallest building acquired the nickname ‘The Alamo’, a reference to the doomed fortress in San Antonio that was stormed by the Mexicans during the Texas Revolution of 1836.

Defensively, the outpost was at a serious disadvantage. Located in the centre of town, it was surrounded by a maze of buildings and alleyways, which provided cover for the enemy and enabled them to infiltrate right up to the compound walls.

Additionally, the Taleban’s strength in the area meant that helicopters were vulnerable to attack and unable to land nearby. This made re-supply and casualty evacuation much more difficult.

However, the defenders were still able to call upon formidable air support when required and to intercept Taleban communications, thereby gaining an insight into their activities.

A further complication was the civilian population. Musa Qala was a town of about 20,000 people. Many had fled as the fighting intensified, but the risk of civilian casualties remained a serious problem.

The men of the Royal Irish now began what would amount to a 10-week stay in Musa Qala, which Groves documented in a daily journal.

On arrival, they immediately deployed their two formidable 81mm mortars. These versatile mobile support weapons have been in service with the British Army since 1965. Capable of firing high-explosive, smoke and illuminating rounds out to a maximum range of 5,650 metres, they were a valuable addition to the garrison's firepower.

The mortars were called into action that first day, helping to beat off two Taleban attacks with a show of force that dealt the enemy a heavy blow and provided a morale boost to the defenders.

However, this mood was quickly tempered by the sobering news about Private Cutts, which brought home the harsh reality of their situation.

‘We unleashed our most vicious display of mortaring yet... it was hard to say how many were killed but it did send a clear message to the Taliban – don’t **** with the Royal Irish.’ Corporal Danny Groves, journal entry, 11 August 2006

This was just the beginning of what would prove to be a desperate battle as the defenders came under repeated attack from a force of over 500 Taleban fighters.

Cunning, courageous and resilient, the Taleban were a formidable foe. They were equipped with a wide variety of weapons, including sniper rifles, machine guns, mortars, and rocket-propelled grenades (RPGs). At the same time, their ability to blend in with the local population made them difficult to identify and target.

On 24 August, the Danish contingent was withdrawn and replaced by a smaller and less well armed force of paratroopers, and another platoon of the Royal Irish. Sensing an opportunity, the Taleban renewed their attacks with greater vigour.

The remaining composite British force took the name Easy Company. The men of this unit were to forge a fierce bond as they battled on for three more long weeks.

British soldiers watch a 500lb bomb being dropped on enemy positions during the withdrawal of the garrison’s Danish contingent, 24 August 2006 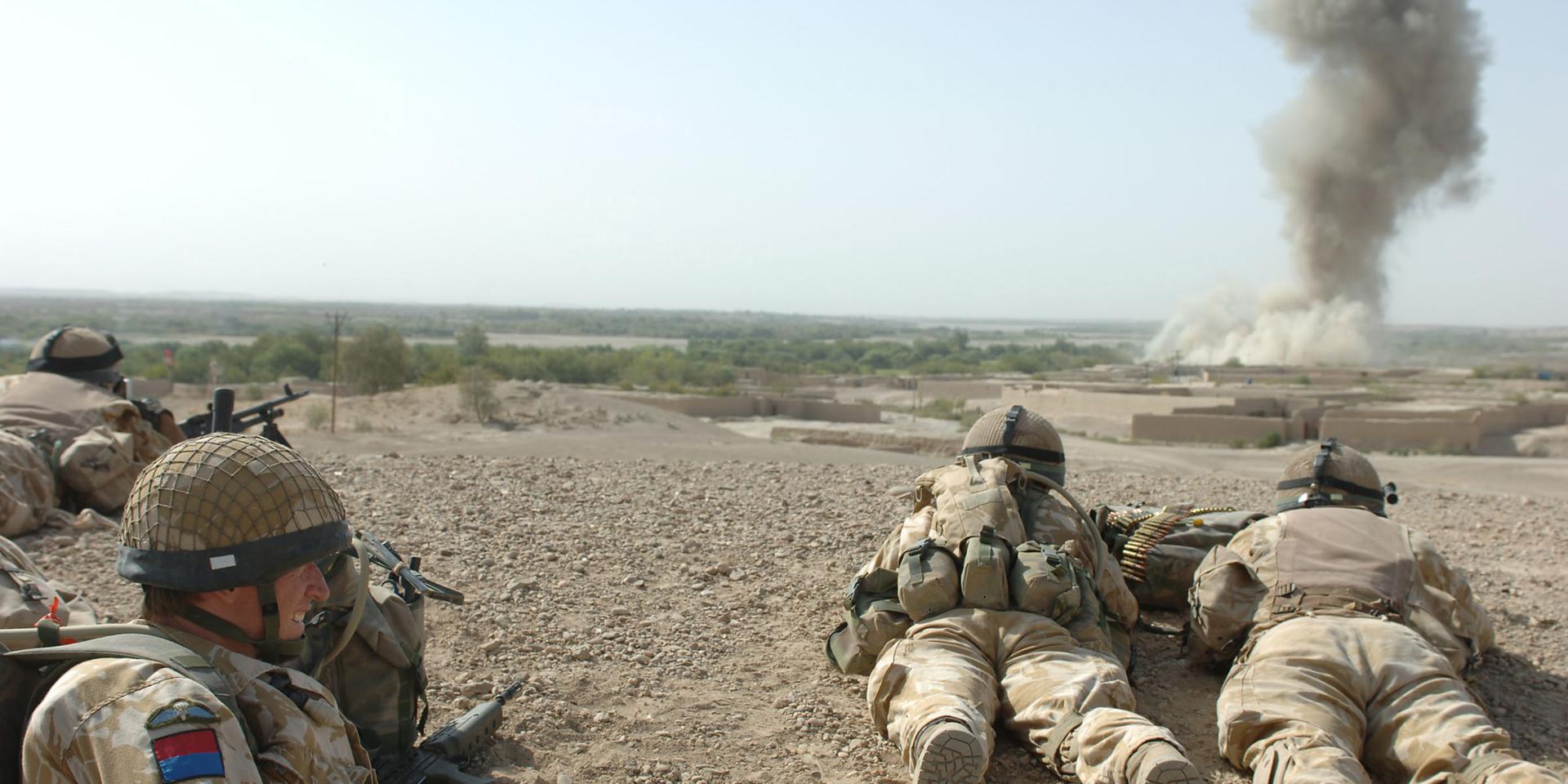 British soldiers watch a 500lb bomb being dropped on enemy positions during the withdrawal of the garrison’s Danish contingent, 24 August 2006

Groves’s team played a vital role in the defence of the compound. They fired over 800 mortar rounds, often at remarkably close range.

Over the course of the battle, the garrison recorded over 100 enemy contacts. These left the compound buildings pockmarked with battle damage, but also took a heavy toll of casualties.

The worst day was 1 September, when two soldiers manning 'The Alamo' - Fijian-born Ranger Anare Draiva and Lance Corporal Paul Muirhead - were hit by a mortar shell. Draiva died instantly; Muirhead was mortally wounded and died a few days later. In total, three men were killed and 12 more were wounded.

Part of the Musa Qala compound known as ‘The Alamo’, showing battle damage, 2006

Mug made by members of Barossa Platoon, 1st Royal Irish Regiment, who served with Easy Company in Musa Qala, 2006

The fierce fighting was punctuated by long spells of calm. For the men of Easy Company, the stress and strain of alerts contrasted greatly with the mundane functions of daily life, like eating, sleeping, as well as training and improving their defences.

Food was insufficient and monotonous. Later, the men took the opportunity to supplement their rations by bartering with the locals for sheep, which they butchered themselves.

They also had time for recreation and organised competitions to see who could make the best bow-and-arrow or glider, as well as crafting their own chess boards and playing cards. These activities were important for warding off boredom and keeping up morale.

‘The thing is with soldiers... they always do stuff to keep themselves busy’

Interviewed in 2007, a year after the events he is describing, Danny Groves talks about some of the more mundane aspects of life during the siege of Musa Qala.

The situation in Musa Qala created a dilemma for the coalition’s military and political leaders. Although the compound was defended effectively, the garrison was taking casualties and could not hold out indefinitely. Victory appeared out of reach, but a withdrawal could be both hazardous for the defenders and a significant propaganda win for the Taleban.

Eventually, in mid-September, a compromise solution was worked out through the initiative of the locals, and a truce was brokered by which both sides could withdraw.

Apache helicopter photographed from the back of a civilian ‘jingly wagon’ during the extraction from Musa Qala, October 2006

The truce left the town facing an uncertain future. But, for the men of Easy Company, an end was now in sight.

Their ordeal was not quite over. Hopes for an early extraction were dashed and they were compelled to hold out until mid-October, while the coalition tested the viability of the truce.

The men were finally withdrawn on 13 October in Afghan lorries, known as ‘jinglies’, under the protection of the local tribal elders who had brokered the truce.

In February 2007, the Taleban reneged on the deal and occupied Musa Qala. The coalition launched another offensive later that year to retake the town.

Groves left the Army in 2007. He returned to the West Midlands, where he settled down to life as civilian and started a family. While he has been able to move on, for all who served there, Musa Qala casts a long shadow and will forever live in their memories. 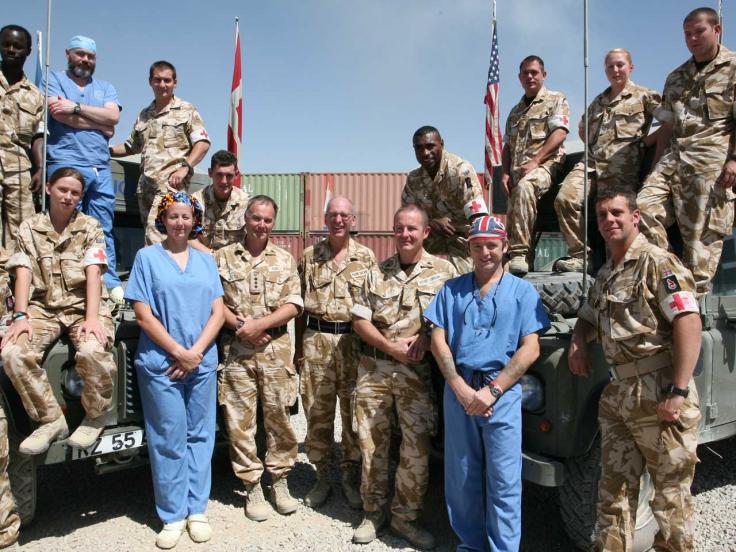 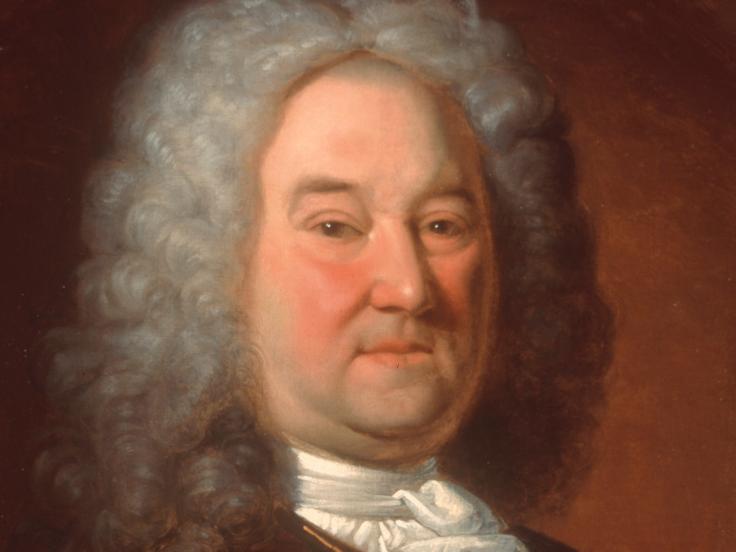 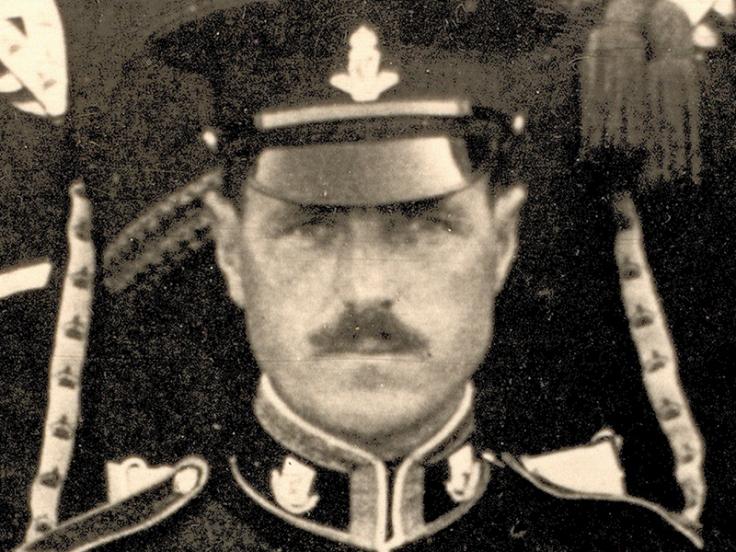 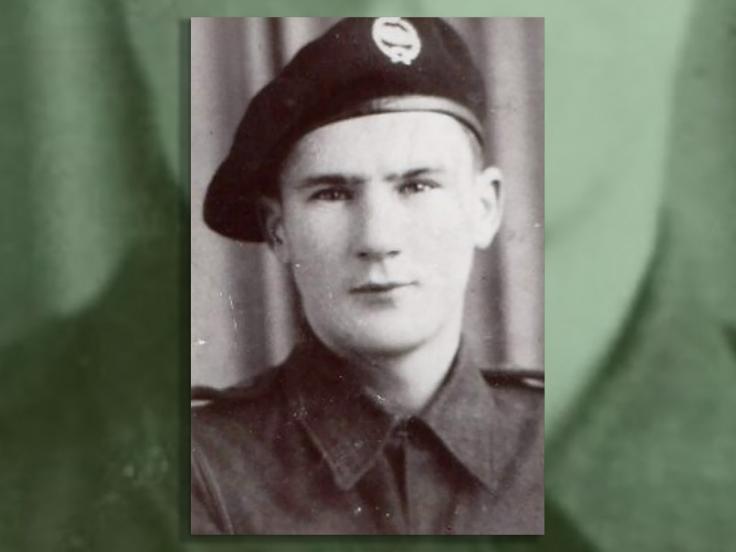 Gerry Chester served with the tanks of the North Irish Horse in North Africa and Italy during the Second World War. Like other tankmen, he forged a close bond with his crew mates, with whom he endured many hardships and combat actions.