In February 1916, the Allies finally completed the conquest of Germany’s West African colonies. One of the First World War’s forgotten sideshows, this campaign was fought in hostile terrain and disease-ridden jungles. The contribution of Britain’s colonial troops was crucial in securing victory.

British troops resting at a waterfall, 1915 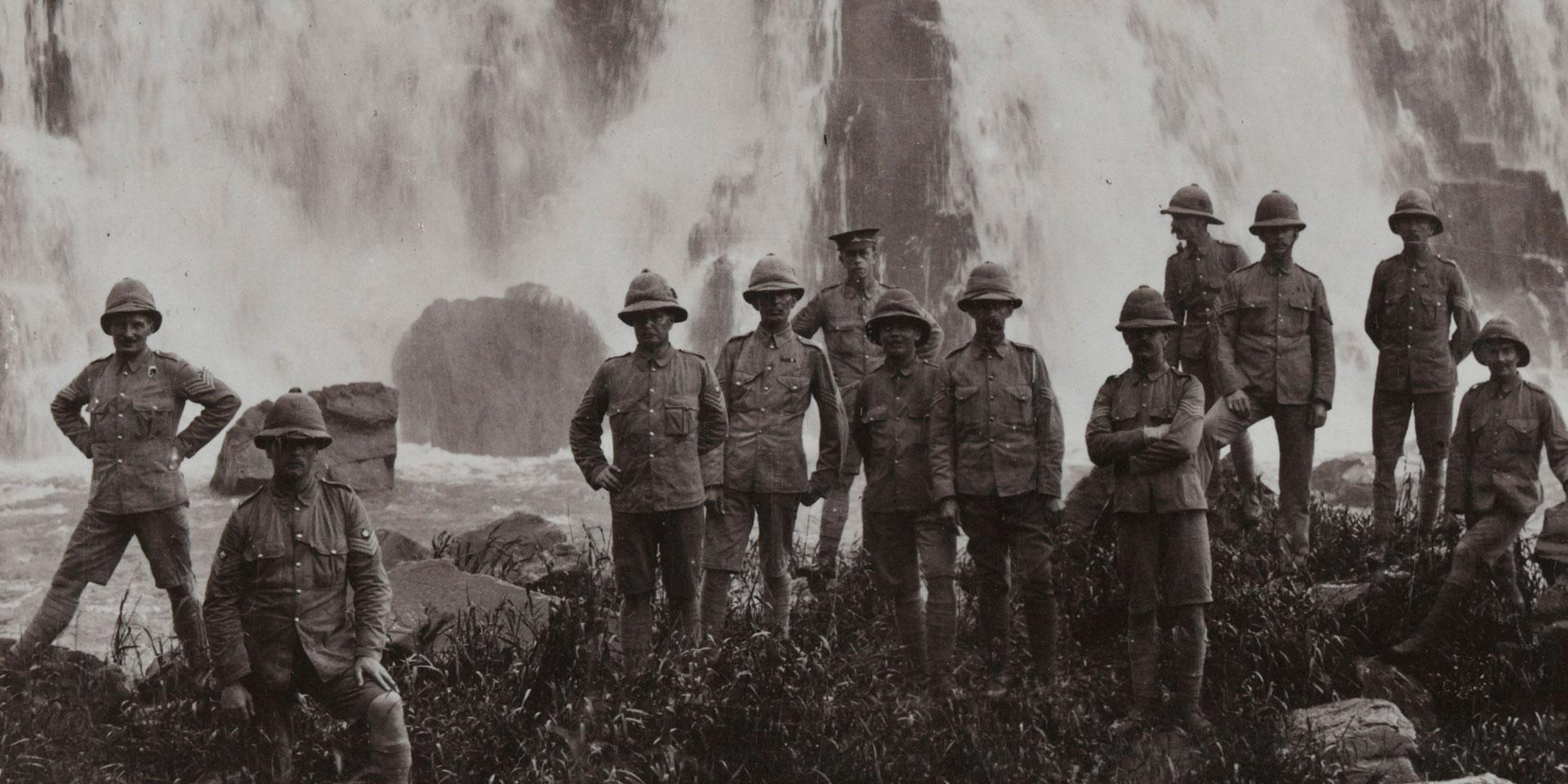 British troops resting at a waterfall, 1915

Germany’s West African territories consisted of Togoland (now Togo) and Kamerun (now Cameroon). They were poorly defended and surrounded on all sides by French and British colonies.

Togoland was quickly conquered in August 1914 by forces from the British Gold Coast (now Ghana). Three British columns then attacked Kamerun from Nigeria, but were defeated by a combination of rough terrain and German ambushes.

Flag of the Duke of Meckleberg, German Governor of Togoland, captured in 1914

Soldiers of the Gold Coast Regiment outside the regimental HQ at Kumasi, 1912

Kamerun had a garrison of about 1,000 German soldiers supported by about 3,000 African troops. British forces included the Nigeria and Gold Coast Regiments of the West African Frontier Force, and eventually Indian and British troops.

The British forces greatly outnumbered the Germans. They were supported by an army of carriers, many of whom regularly carried heavy loads for long distances and over rough terrain. Without their contribution, the campaign would never have succeeded.

The conflict was fought in inhospitable jungle conditions that took a heavy toll on the troops involved. The climate, along with virulent diseases and the dangerous wildlife, caused more casualties than the enemy.

‘The rainy season is a period when movement on any scale is practically impossible. Roads as such are to all intents and purposes non-existent and what communications there are, are little better than native paths through the bush… The heat reduces the white man to the consistency of a bit of chewed string and the mosquitoes make high carnival and wax fat and strong… It has been raining for weeks and every bit of ground is either marsh or a roaring torrent, when it is not actually raining a thick mist hangs over the place.’
Diary of Major Charles Stooks, 5th Light Infantry, 17 September 1915 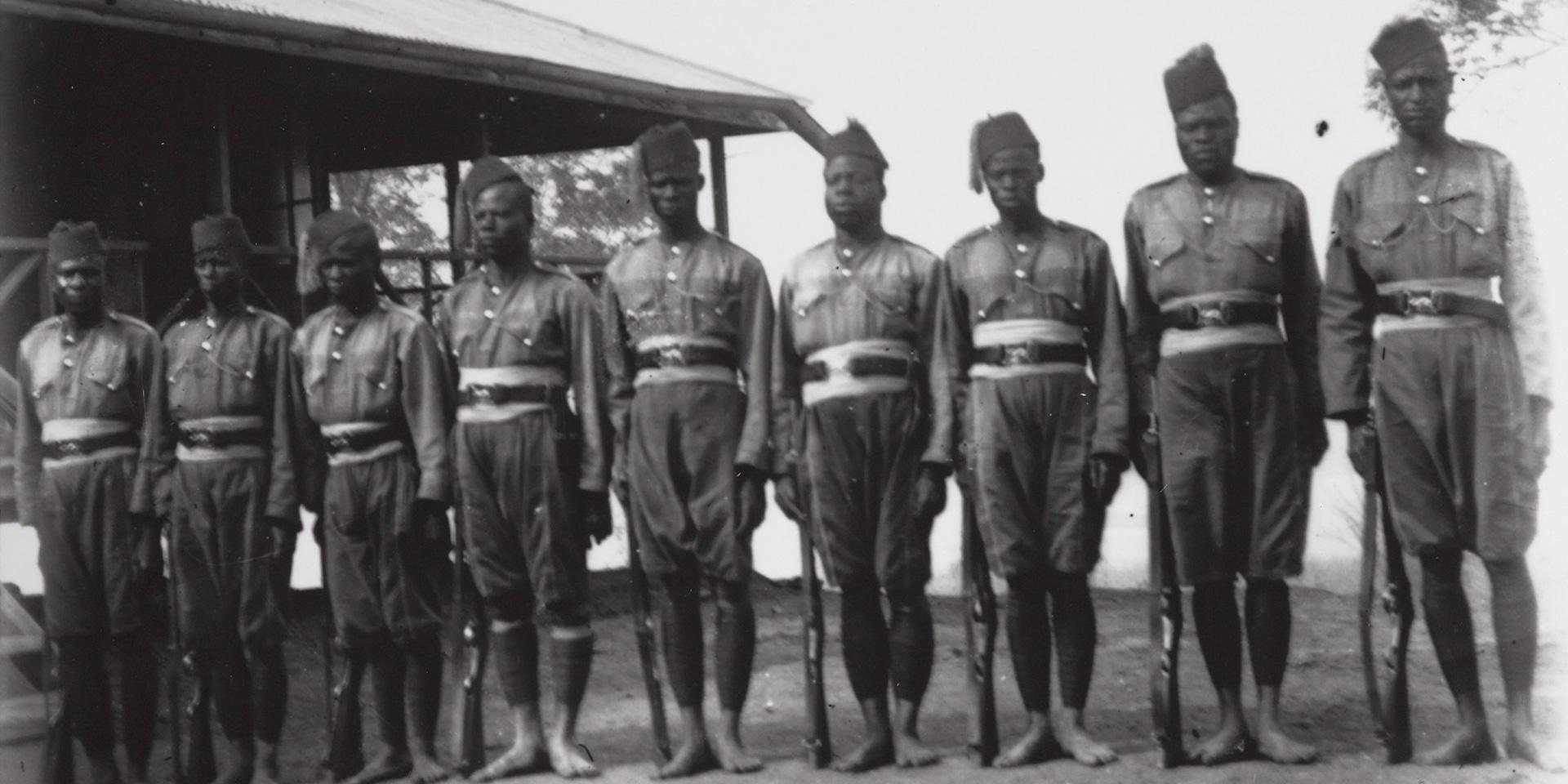 ‘Malaria… has been rampant, and I fear that certain men whose luck it was to be left in unhealthy spots, will feel the effects for the rest of their lives… The men have suffered from fever, daily doses of quinine to sick and sound alike seem to be doing them good in spite of the wet.

The trouble later when the place begins to dry up will be the jigger flea, a pleasing little animal which attacks one’s feet, and having burrowed into the flesh proceeds to lay eggs. If this is not dealt with well and truly early disaster results, and a man can be incapacitated for a long time. The native of the country is an expert in detecting and removing these… and we have instituted a daily inspection of the men’s feet by African stretcher-bearers and machine gun carriers.’ Diary of Major Charles Stooks, 5th Light Infantry, 17 October 1915

British troops from Cameroon refresh themselves at a river, 1918 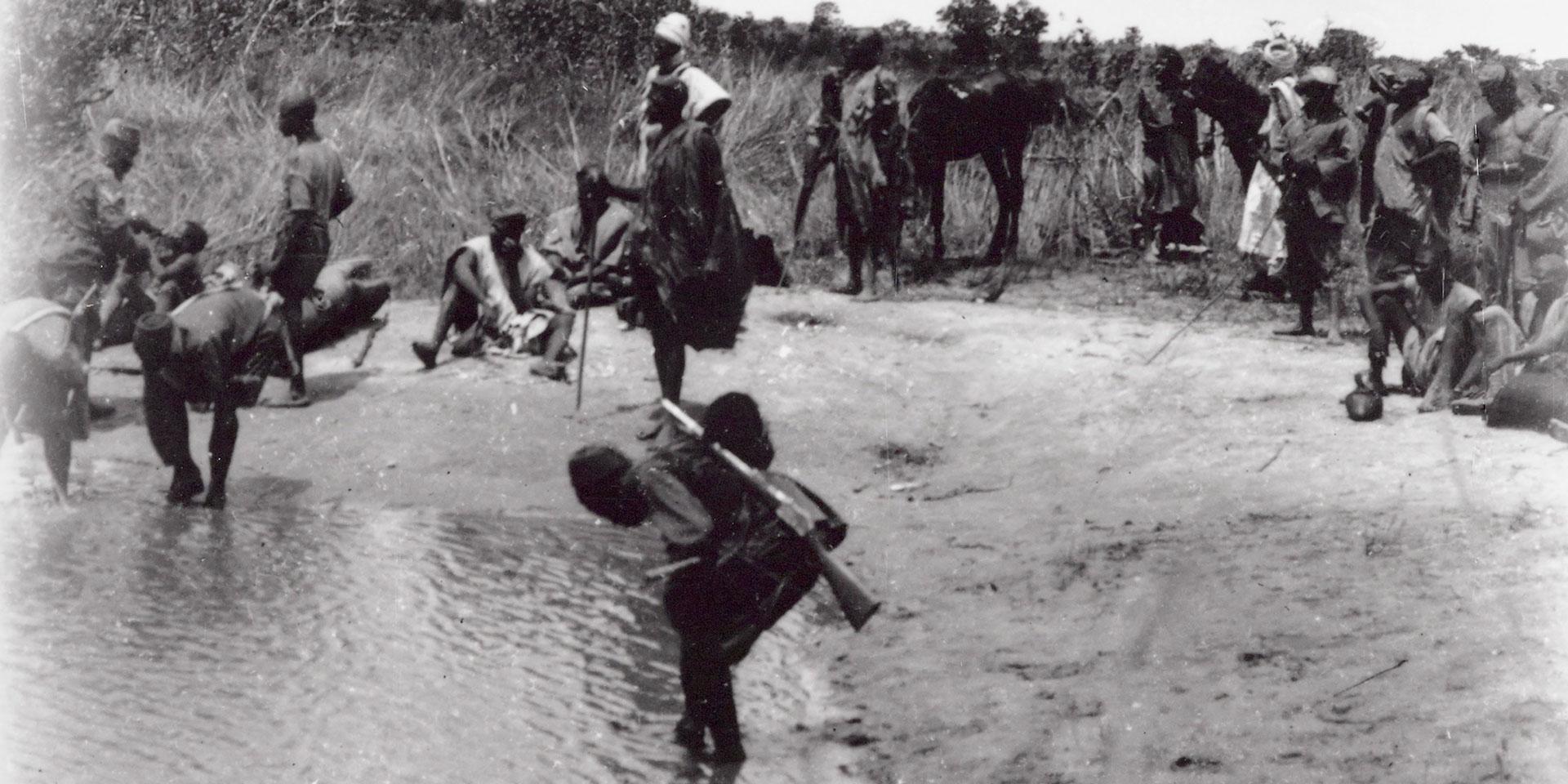 British troops from Cameroon refresh themselves at a river, 1918

In September 1914, the French attacked south from Chad and captured Kusseri in northern Kamerun. Early that same month, a Belgian-French force from the Belgian Congo (now Democratic Republic of Congo) captured Victoria (now Limbe) on the coast.

With the aid of four British and French cruisers acting as mobile artillery, this force captured the colonial capital of Douala on 27 September 1914. The Belgian-French troops then followed the German-built railroad inland, beating off counter-attacks along the way.

Soldiers of the German colonial forces, 1914

By November 1914, Juande (now Yaounde) was captured. Most of the surviving Germans had either retreated into neutral Rio Muni (now Equatorial Guinea) or to the interior, where they held out in posts at Banjo, Fumban, Jokoo and Garua.

During the next year, the re-inforced Allies gradually captured these positions. As territory was conquered, it was secured by establishing new outposts that guarded Allied lines of communication.​​​​

‘It is like looking for the proverbial needle… It is eerie work walking along a narrow bush track, the trees meeting overhead and the grass disputing your right of way, it is still more disquieting when there may be a selection of armed Huns round the next corner with a machine gun nicely covering the path… It is a nuisance having to drop little posts on our lines of communication, but at present it cannot be helped. We don’t know that there may not be an odd party of Huns wandering about the country, and a full convoy would make a nice haul for any such, so essential spots have to be guarded.’ Diary of Major Charles Stooks, 5th Light Infantry, 18 October 1915

German colonial soldiers being brought into a camp for parley, 1914

Despite being outnumbered and increasingly isolated, small groups of Germans continued to put up stout resistance at more than one place, notably on the Juande Road and at Banjo.

But after many skirmishes, ambushes and long marches through inhospitable terrain, the last surviving German post surrendered on 18 February 1916. German Kamerun was no more. 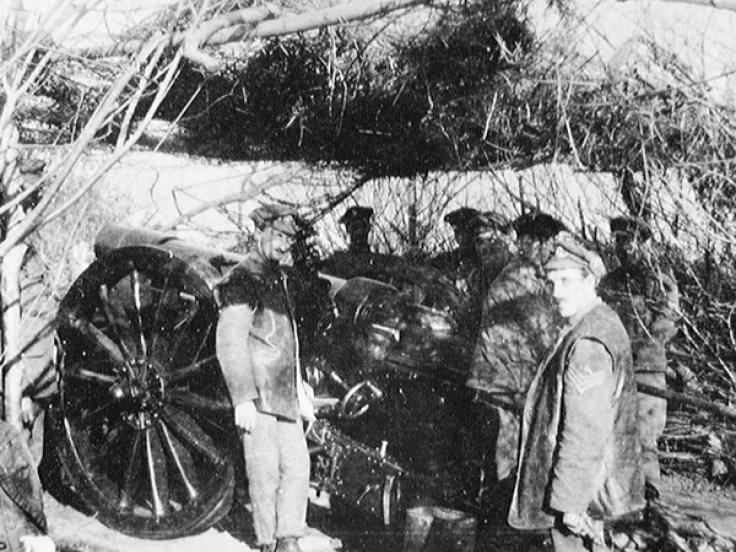 From 1915 to 1918, British troops were part of a multi-national Allied force fighting the Bulgarians and their allies in the Balkans. Despite harsh conditions, they eventually brought the campaign to a successful conclusion.