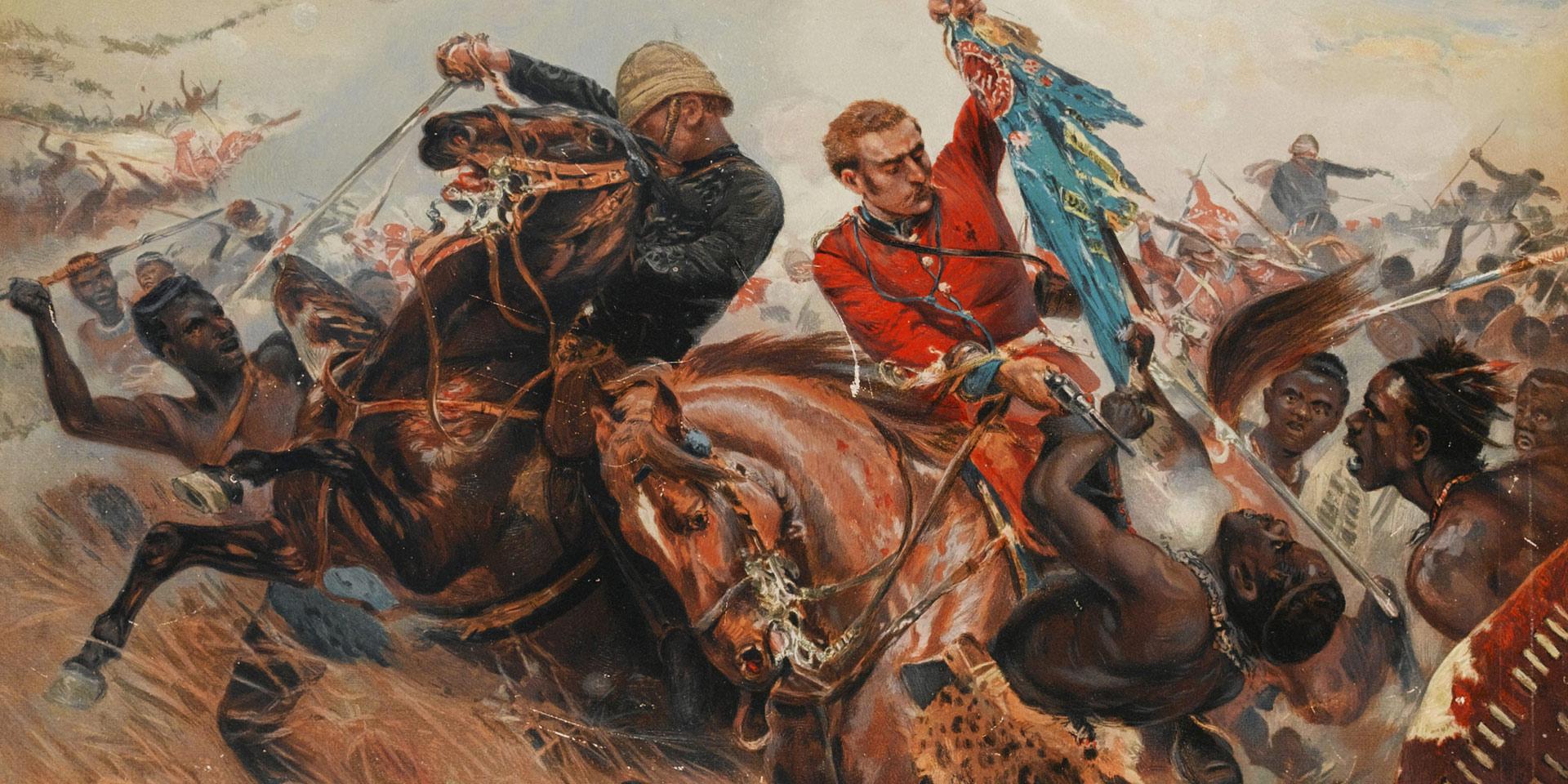 In 1877, Lord Carnarvon, Secretary of State for the Colonies, wanted to extend British imperial influence in South Africa by creating a federation of British colonies and Boer Republics. He appointed Sir Bartle Frere as British High Commissioner there to execute his plan.

Carnarvon’s policy required Frere to gain control over Zululand, a warrior kingdom bordering Natal and the Transvaal. King Cetshwayo refused Frere's demands for federation, or to disband his Zulu army, as it would mean losing his power.

Lord Chelmsford split his invasion force into three columns. He planned to surround the Zulus and force them into battle before capturing the royal capital at Ulundi.

The right column crossed into Zululand near the mouth of the Tugela River to secure an abandoned missionary station at Eshowe as a base. The left column entered Zululand from the Transvaal and made for Utrecht.

Finally, the centre column, led by Chelmsford himself, crossed the Buffalo River at Rorke's Drift mission station to find the Zulu army.

Fearing British aggression, Cetshwayo had started to purchase guns before the war. The Zulus now had thousands of old-fashioned muskets and a few modern rifles at their disposal. But their warriors were not properly trained in their use.

Most Zulus entered battle armed only with shields and spears. However, they still proved formidable opponents. They were courageous under fire, manoeuvred with great skill and were adept in hand-to-hand combat. Most of the actions fought during the war hinged on whether British firepower could keep the Zulus at bay.

‘March slowly, attack at dawn and eat up the red soldiers.’ King Cetshwayo's orders to his troops at Isandlwana, 1879 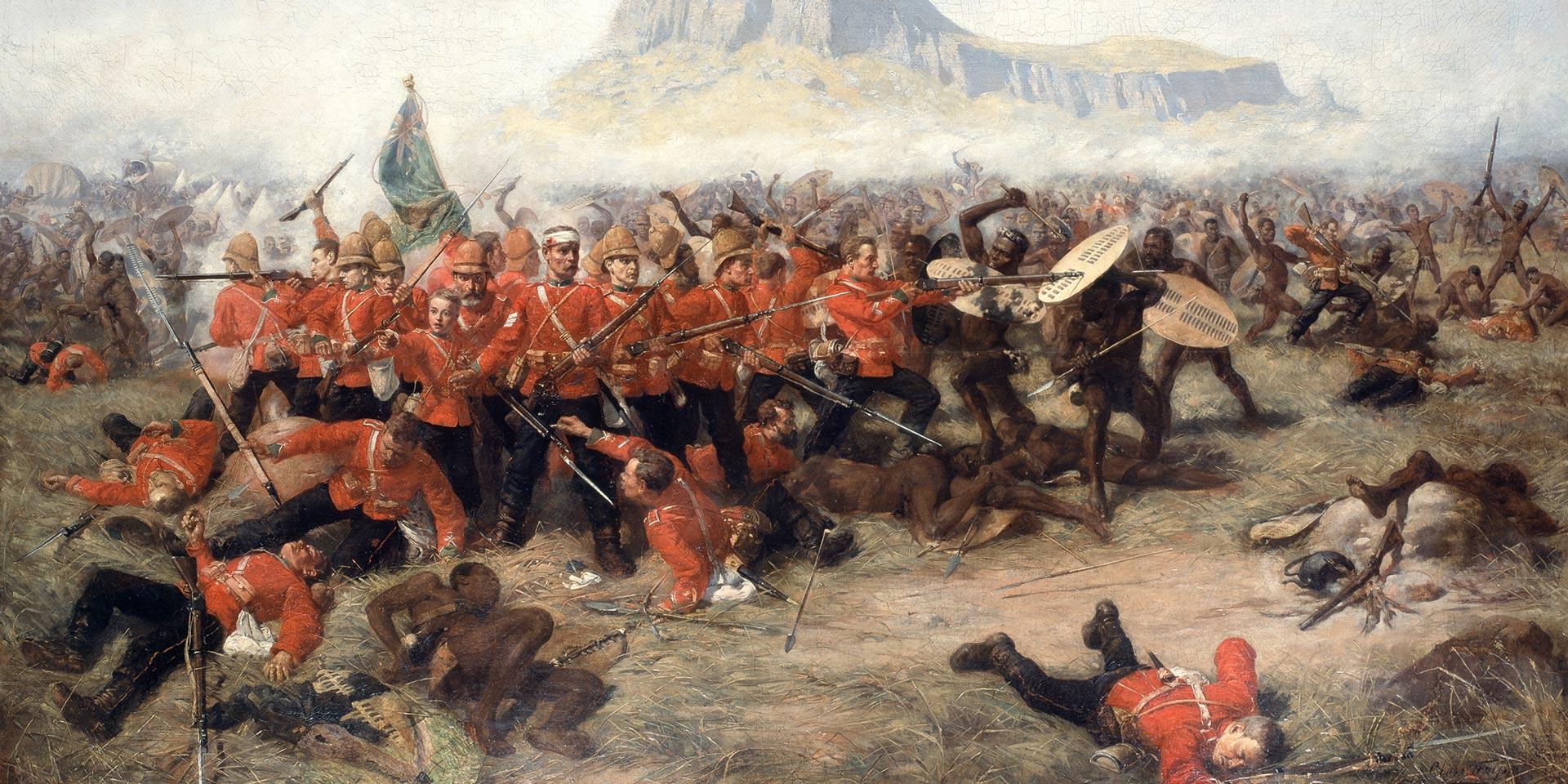 On 22 January 1879, Chelmsford established a temporary camp for his column near Isandlwana, but neglected to strengthen its defence by encircling his wagons. After receiving intelligence reports that part of the Zulu army was nearby, he led part of his force out to find them.

Over 20,000 Zulus, the main part of Cetshwayo's army, then launched a surprise attack on Chelmsford's poorly fortified camp. Fighting in an over-extended line and too far from their ammunition, the British were swamped by sheer weight of numbers. The majority of their 1,700 troops were killed. Supplies and ammunition were also seized.

The Zulus earned their greatest victory of the war and Chelmsford was left no choice but to retreat. The Victorian public was shocked by the news that 'spear-wielding savages' had defeated their army.

This belt was taken from King Cetshwayo after his capture. It was probably worn by a soldier at Isandlwana. 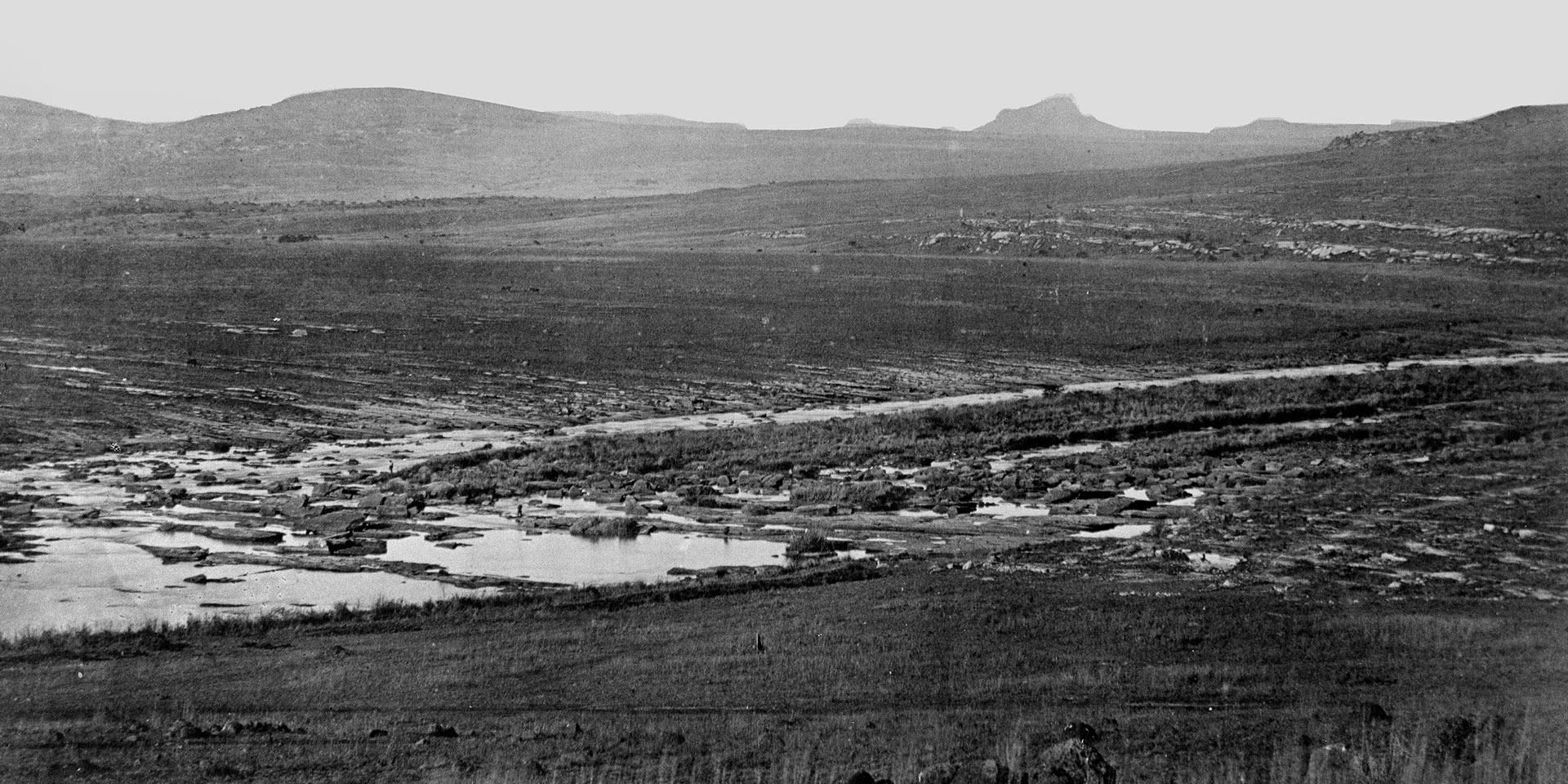 After their victory at Isandlwana, around 4,000 Zulus pressed on to Rorke’s Drift, where a small British garrison held them back for 12 hours. Although a welcome boost to British morale, the siege had little effect on the overall campaign.

After Colonel Charles Pearson's right column defeated 6,000 Zulus at Nyezane, it occupied Eshowe station, but was then besieged by the Zulus for two months.

Upon hearing news of the defeat at Isandlwana, Colonel Evelyn Wood's left column established a fortification near Khambula. His men were the only effective British force left in Zululand.

Chelmsford began preparations for a second offensive into Zululand. The same day, news of the defeat at Isandlwana reached London and reinforcements were dispatched to South Africa.

Chelmsford ordered Wood's column to distract the Zulus with a diversionary attack near Hlobane, while he marched to relieve Eshowe. Wood was forced to retreat, but lured the Zulus back towards Khambula where his men had dug in.

Wood's column, firing from entrenched positions, repelled over 20,000 Zulus at Khambula. Their concentrated fire inflicted around 3,000 Zulu casualties. As the Zulus fell back, their retreat was turned into a rout by the cavalry. Khambula proved a crushing blow to Zulu morale.

Marching to Pearson's relief, Chelmsford defeated an attack by the Zulus at Gingindlovu.

Eshowe was evacuated following the arrival of Chelmsford's relief force. By the end of the month, most of Chelmsford’s men were back in Natal, where preparations were made for a second invasion of Zululand. 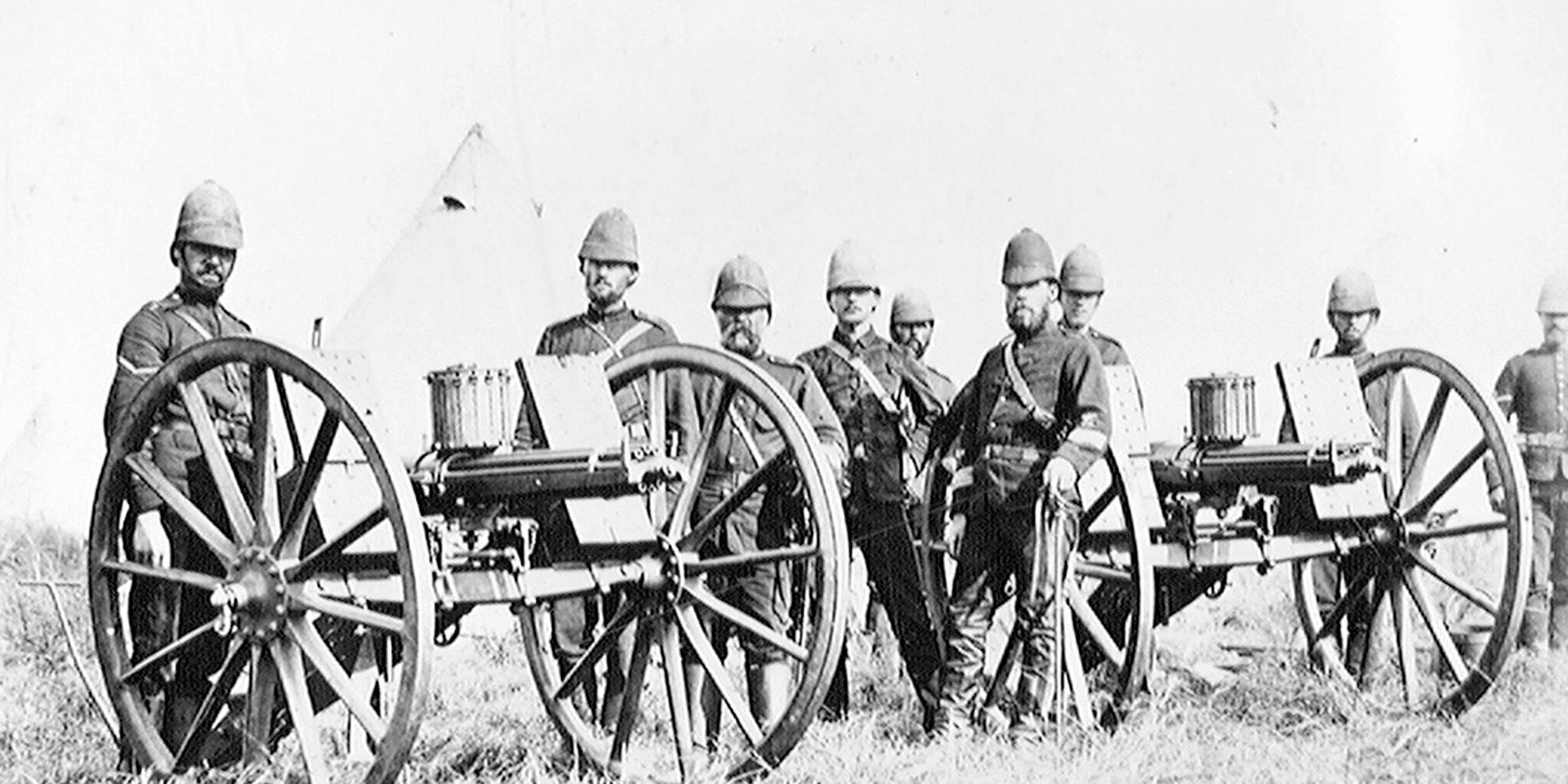 The British government was concerned about the lack of military progress and possible Zulu threats to British territory in Natal. Orders were issued for Lord Chelmsford to be replaced by Sir Garnet Wolseley.

The Zulus were aware that Chelmsford was planning a second invasion and King Cetshwayo sent envoys to negotiate peace. But, eager to redeem himself before his replacement arrived, Chelmsford ignored Cetshwayo's pleas and invaded again at the end of May 1879. His reinforced army made steady progress, despite supply problems and constant skirmishing.

The French Prince Imperial, Louis-Napoléon - who had been exiled to England after his father was dethroned in 1870 - served on Lord Chelmsford's staff during the war.

He had only been allowed to go to South Africa after his mother, the Empress Eugenie, and Queen Victoria had intervened on his behalf. But this was on the strict condition that he be kept out of danger.

He was ambushed and killed near Ulundi on 1 June 1879, after setting out on a patrol without his full escort. His body was found with 18 spear wounds. It had also been ritually disembowelled. His death caused an international scandal. 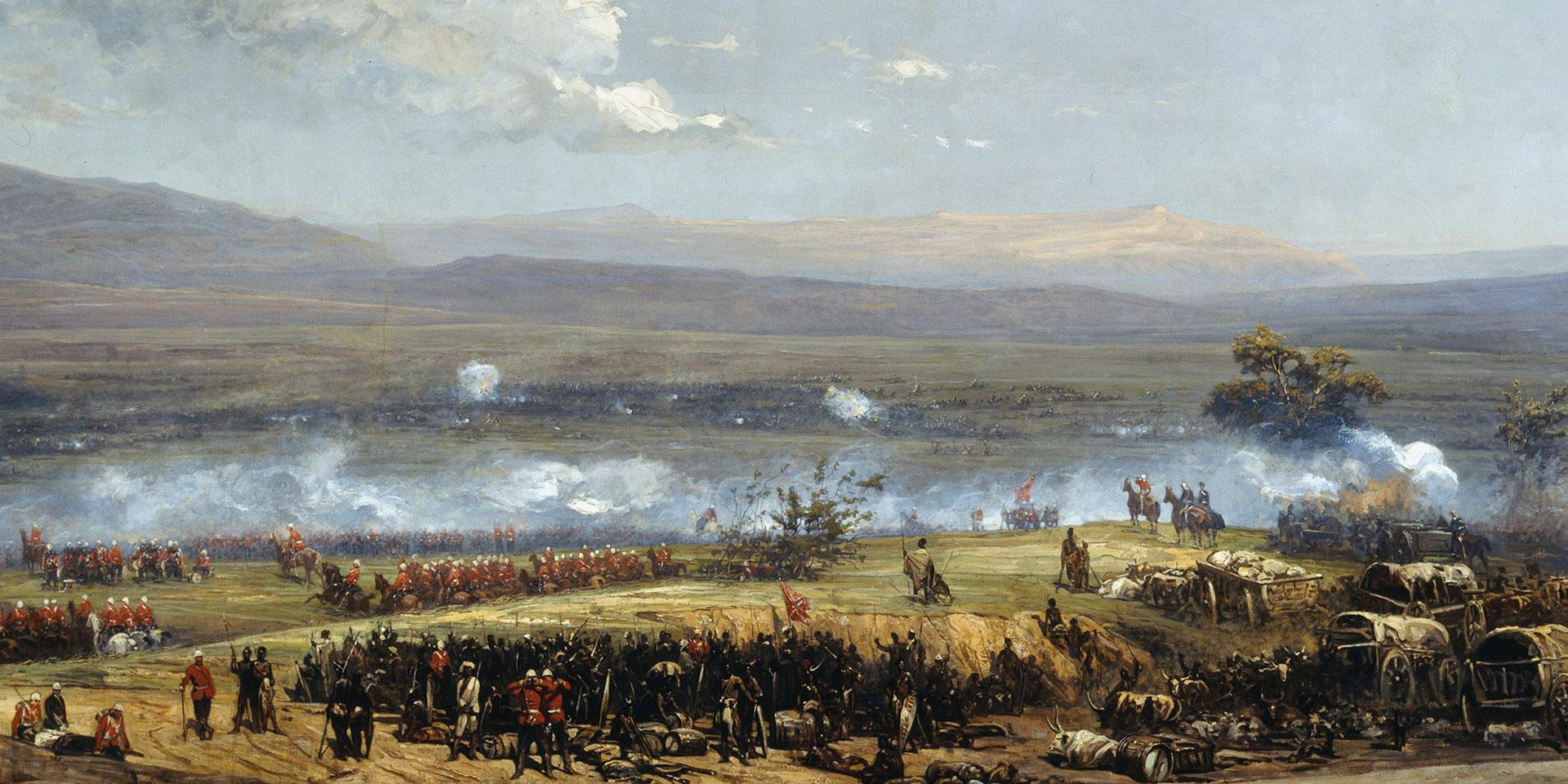 On 4 July, Chelmsford drew up his 5,000-strong army in a large square opposite Cetshwayo’s capital at Ulundi. Around 20,000 Zulus attacked in their usual fashion. But faced with Gatling guns and artillery, their brave charges soon petered out. The cavalry then drove the survivors from the field.

Around 6,000 Zulus had been slain for the loss of 10 men killed and 87 wounded. The British were so impressed by the courage of their opponents that they built a memorial to the Zulus at Ulundi along with their own. 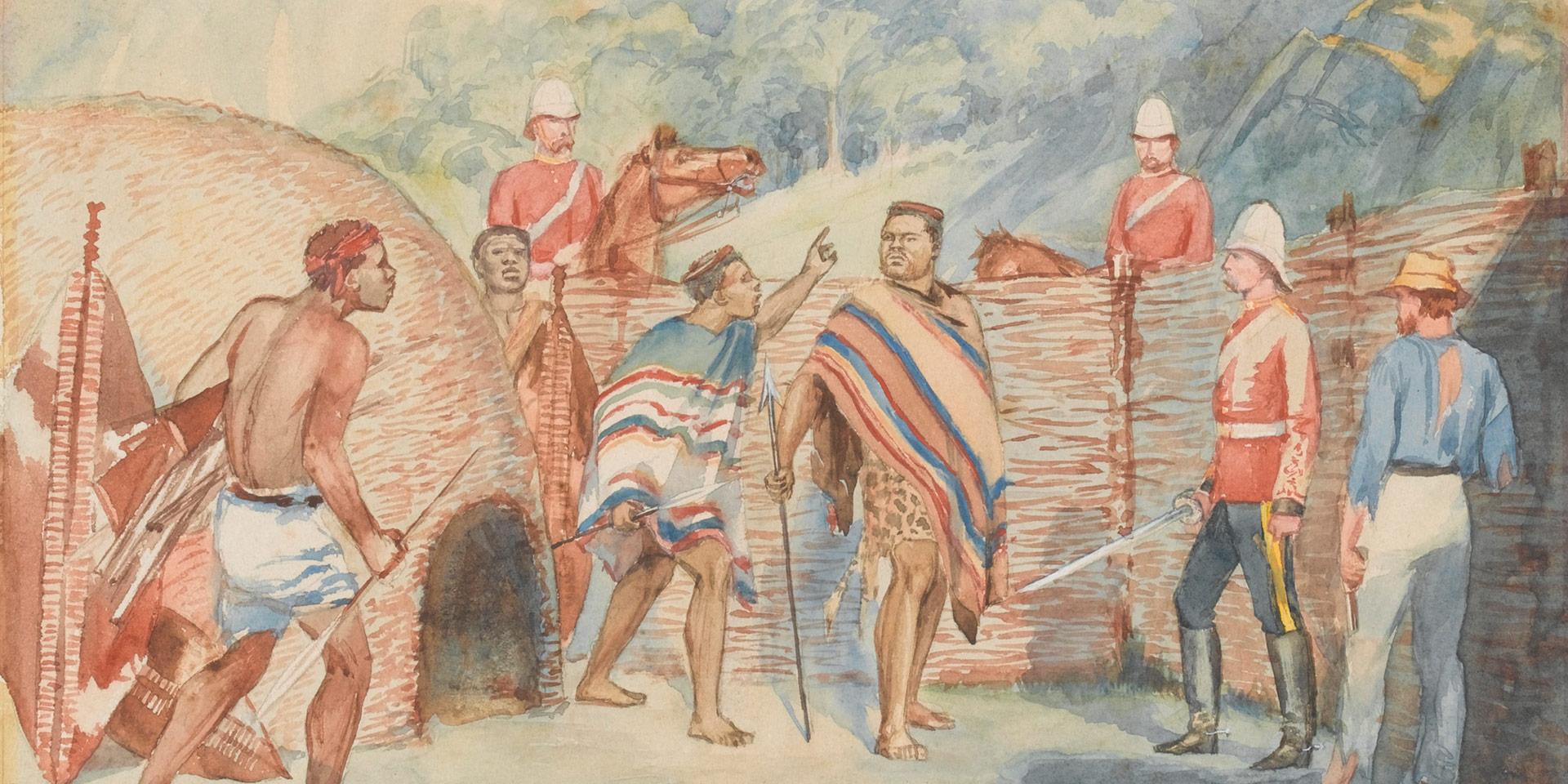 After the Battle of Ulundi, King Cetshwayo was hunted down and captured. The Zulu monarchy was suppressed and Zululand divided into autonomous areas. Cetshwayo's possessions were seized, and he was sent into exile in Cape Town, and later London.

In the king's absence, civil war ensued. In 1883, the British attempted to restore order by returning Cetshwayo to his throne. However, his powers were now greatly reduced and he died the following year.