Unless we happen to hold personal items relating to that soldier within our collections - which you can check by using our Online Inventory - your best starting point is to search for a surviving service record. The guidance below outlines the most appropriate places to look.

In order to trace the service of soldiers from the First World War (or earlier), you must first determine whether or not their service record survives.

Regrettably, more than half of the service records were damaged or destroyed in September 1940, when a German bombing raid struck the War Office repository in Arnside Street, London. An estimated 2.8 million service records survived the bombing or were reconstructed from the records of the Ministry of Pensions (roughly 40 per cent of the total).

If it does survive, the service record will now be kept at the National Archives at Kew. They give advice for the pre-1913 service, and post-1913 service. The damaged records are referred to as the Burnt Records, and are held under TNA reference WO 363, and undamaged records from the same period exist in WO 364. These records have been digitised, and can be searched online.

Although they rarely mention ordinary soldiers by name, official war diaries (WO 95 and WO 154) contain daily records for the units in which they served. These can give you an idea of where an individual served and any notable events they were involved in.

The Ministry of Pensions files in PIN26, similar in content to those preserved in WO 364, contain a small number of further pension records for those discharged on medical grounds during the war.

For any soldiers who were taken prisoner during the First World War, there is likely to be an International Red Cross index card entry. All of these have now been digitised and can be searched via their website.

If you know which regiment or corps the soldier served with, we also recommend checking for any records held by the relevant regimental or corps museum. Their contact details can be found using the Army Museums Ogilby Trust website.

Records for the post-1920 period are still considered official records and are held by the Ministry of Defence at the Personnel Centre in Glasgow.

For soldiers who are now deceased, next of kin are entitled to request historic disclosures of service records, but there is often a few months’ wait and there is a small access fee involved (about £30 at time of last checking). The whole application process can now be completed online.

It may also be worth contacting the Army Medals Office, who keep records concerning entitlement to service and campaign medals in the Second World War.

The Red Cross holds records of prisoners taken during the Second World War. Details on how to enquire about these records can be found online.

If you know the regiment or corps the soldier served with, we also recommend checking for any records held by the relevant regimental or corps museum. Their contact details can be found using the Army Museums Ogilby Trust website.

Commonwealth soldiers who died in the World Wars

The Commonwealth War Graves Commission (CWGC) maintains records of the 1.7 million men and women of the Commonwealth who died in the World Wars, and also maintains cemeteries and memorials for them. The CWGC website contains a searchable database of those recorded as lost.

The National Army Museum holds the soldiers’ effects ledgers that were created by the War Office to record the monies owing to those who died while serving in the British Army. These records run from 1901 to 1960, covering the latter stages of the Boer War and, of course, both World Wars.

Typically, they contain the following details: name, rank, regiment, service number, date (and sometimes place) of death, name of the next of kin, and how much they received. They do not list any personal items, addresses or pension details. You can search the records for 1901-29 online.

The National Army Museum also holds the enlistment books of five Irish units of the British Army which were disbanded following the establishment of the Irish Free State in 1922.

They contain records of soldiers serving in the Connaught Rangers, the Leinster Regiment, the Royal Dublin Fusiliers, the Royal Irish Regiment and the Royal Munster Fusiliers between 1920 and 1922. You can search these records online.

The National Archives' Colonial Office (CO) holdings contain some material on soldiers who fought in the British Army in Africa during the war, either in the King's African Rifles (CO 534) or in the West African Frontier Force (CO 445).

If service records survive for men from these regiments and from the Indian Army, they are most likely to be in the relevant national archives. Most of the records for soldiers in the Indian Army can be found at the British Library in London.

Service records for soldiers in the Dominion forces of Australia, Canada, New Zealand and South Africa can be found in their respective national archives, and in the case of Australia, further records are held at the Australian War Memorial.

If the person you are researching was an officer, the details of their career advancements will be contained in the Army Lists, which can be accessed at the Templer Study Centre.

It is also worth directing your research to the Liddell Hart Centre for Military Archives, which holds the personal and semi-personal papers of nearly 800 senior British defence personnel, including several senior Army figures.

Please note that due to financial pressures on the National Army Museum as a result of the Covid-19 pandemic, our capacity to respond to individual enquiries has now been significantly reduced. As a result, we are no longer able to reply to enquiries that are not directly related to the Museum’s collections. In the future, we hope to reintroduce an enquiry service, which will be chargeable.

We continue to encourage enquirers to book to see our library and archive collections through the Templer Study Centre in Chelsea, or for our other collection types at our Collections Centre in Stevenage. 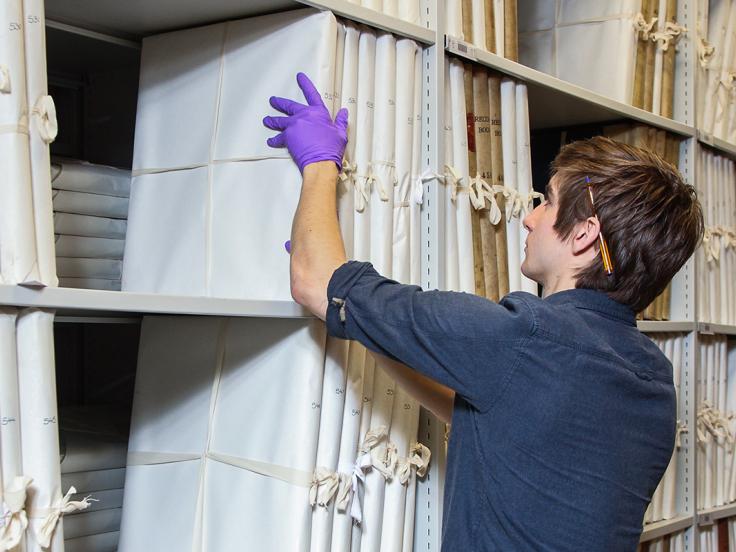 How to research our collections

Find out how to view and access information about items in the the National Army Museum's Collection.