This battle was fought on 28 January 1846 during the First Sikh War (1845-46). A British-Indian force took on the Sikh army of the Punjab, known as the Khalsa (literally ‘the pure’). It ended in a decisive British victory and is seen by some as a ‘near perfect battle’. 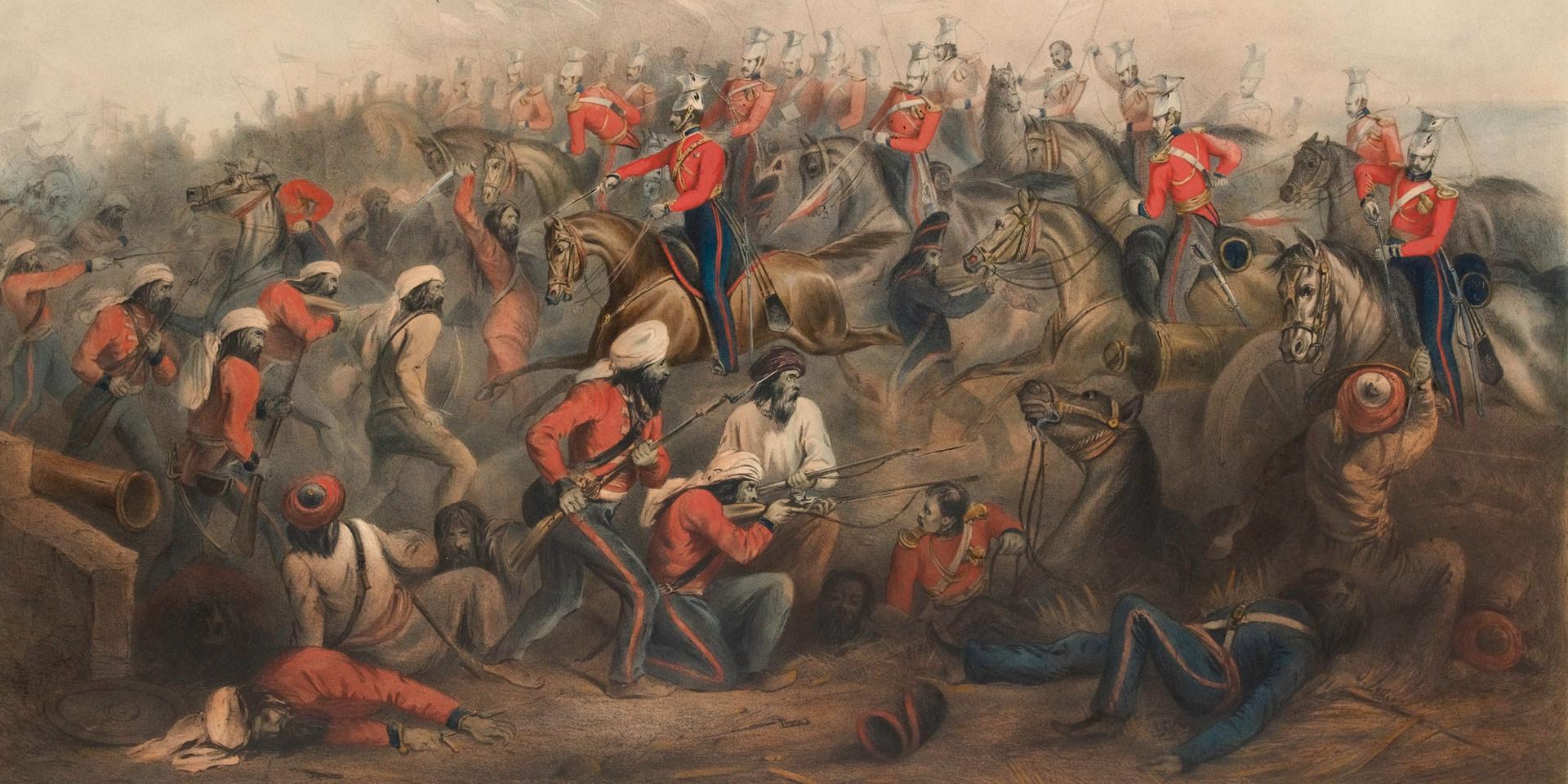 During the early 19th century the Sikh kingdom of the Punjab was built and expanded under the rule of Maharaja Ranjit Singh. During the same period British India was also growing, so that by the 1830s its territory was adjacent to the Punjab.

Ranjit Singh was a skilled politician who maintained an uneasy alliance with the British, while increasing the strength of his army to deter any aggression.

When he died in 1839, the Punjab fell into disorder. There was a succession of weak and short-lived rulers and increasing tension between the army and court.

The British started to build up their forces on the borders of the Punjab. Some British officials hoped for war, believing the Sikhs were the only remaining power that could threaten their hold over India

The tension eventually led the Khalsa to cross the Sutlej River on 11 December 1845 and invade British territory. Members of the Sikh court who wanted to curtail the Khalsa’s power possibly encouraged this.

General Sir Hugh Gough and Governor-General of India Sir Henry Hardinge advanced to meet the Sikh army. After winning hard-fought victories at Mudki (18 December) and Ferozeshah (21 December), they forced the Sikhs to retreat.

Reinforced, the Sikhs moved to renew the war by re-crossing the Sutlej and establishing a bridgehead at Sobraon. To support this operation, another Sikh force under Ranjodh Singh Majithia was dispatched to attack the British fort at Ludhiana and threaten their supply lines.

Alerted to this threat, Gough detached troops under General Sir Harry Smith to counter Ranjodh Singh. Their armies met at Aliwal on 28 January 1846.

The British deployed a force of 12,000 British and Indian troops and 32 guns under the command of General Sir Harry Smith (1787-1860), a veteran of the Napoleonic Wars and deputy adjutant general to the army in India. Having skillfully commanded a division at Mudki and Ferozeshah, Smith was a natural choice to command the army at Aliwal.

Smith faced a 20,000-strong Sikh army led by General Ranjodh (or Ranjur) Singh Majithia. The Sikh army, the Khalsa, was probably the most formidable opponent the British faced on the sub-continent.

It was composed of traditional Indian irregular cavalry and infantry alongside European-trained regulars. The latter even wore redcoats like the British. The Sikh artillery was of a particularly high standard. At Aliwal, Ranjodh Singh’s force was equipped with 67 guns. 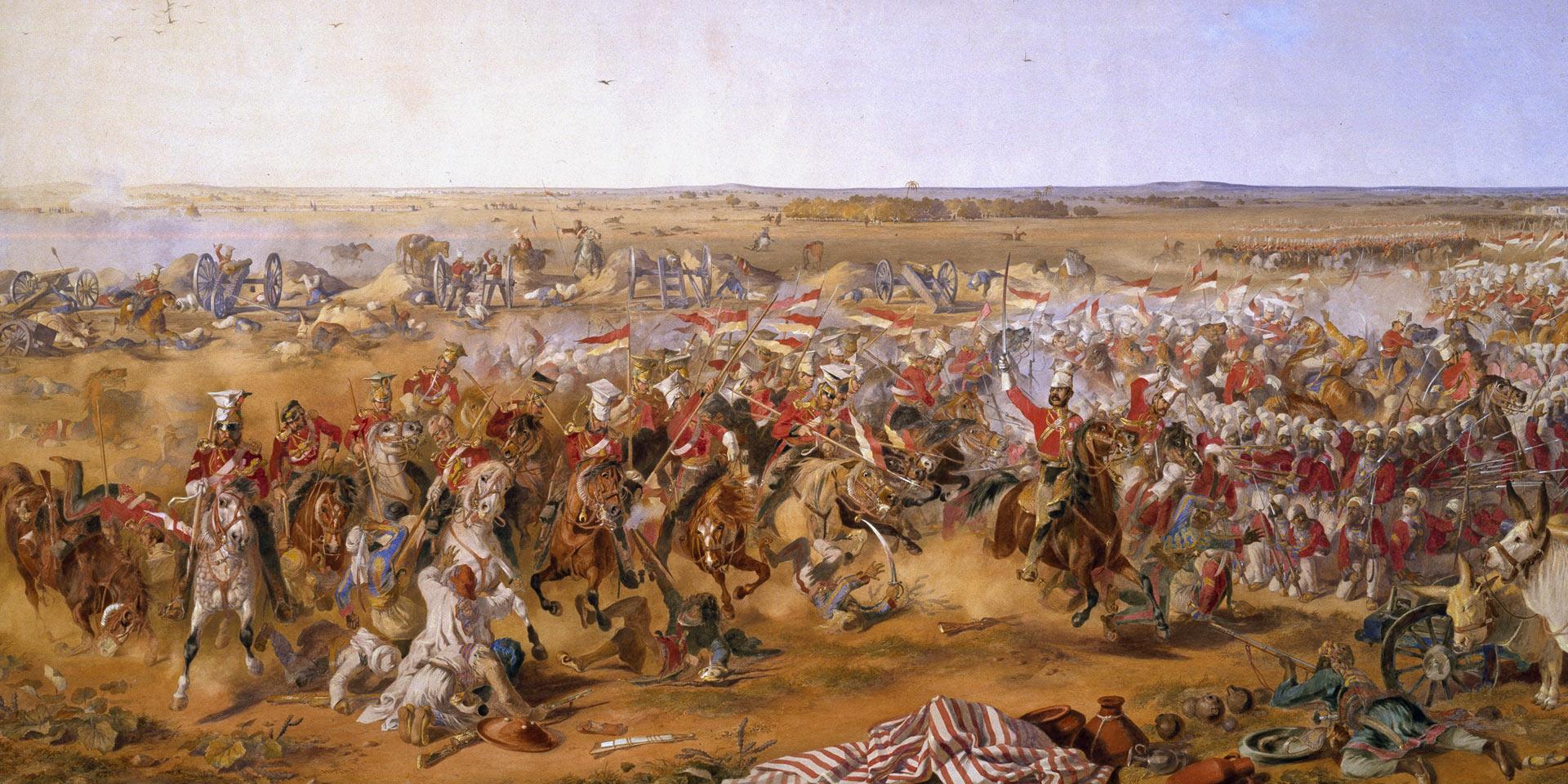 The Sikhs occupied an entrenched position along a ridge between the villages of Aliwal on the right and Bhundri on the left. To their rear was the Sutlej River, running for the entire length of their line.

This made it difficult for them to manoeuvre and was potentially dangerous should they be forced to retreat.

The battle began with an indecisive artillery duel. But eventually Smith decided to drive the Sikhs out of Aliwal, identifying it as the weakest part of their defence.

Four infantry brigades attacked and captured the village. From there they could then enfilade (sweep with gunfire) the exposed Sikh centre and threaten their crossings over the river.

Sikh attempts to recover the position with cavalry failed after a series of British counter-charges. The British infantry then began to roll up the Sikh line.

The Khalsa tried to swing back along the river, pivoting on Bhundri to prevent the British from cutting off their line of retreat across the Sutlej. The Sikh cavalry then threatened the British left flank. In response, Smith deployed the rest of his cavalry, led by the 16th Lancers, who charged several times to disperse the Sikh horsemen.

Next, the 16th Lancers, ably assisted by horse artillery, broke a number of Sikh infantry battalions that had formed square to receive them. The Lancers then overran a battery of Sikh artillery before capturing Bhundri and driving its garrison back to the river.

Charge of the 16th (Queens Own) Lancers at the Battle of Aliwal,

In the centre, the remaining Sikh infantry tried to resist. But, with their flanks collapsing, they were eventually forced to retreat after suffering heavy casualties from the advancing British infantry and horse artillery. The retreat quickly turned into a disorderly rout across the fords. On the far bank of the river Ranjodh Singh tried to form a new line, but this was dispersed by artillery fire.

All of the Sikhs' guns were either captured or lost in the river. Much of their baggage and supplies was also captured. Smith lost 141 men killed, 413 wounded and 25 missing. During their charges the 16th Lancers suffered 140 casualties out of 300 men. Around 3,000 Sikhs were killed.

The 16th Lancers breaking a square at Aliwal, 1846

'I have gained one of the most glorious battles ever fought in India ... Never was victory more complete, and never was one fought under more happy circumstances, literally with the pomp of a field day; and right well did all behave.’ General Sir Harry Smith after the Battle of Aliwal, 1846

The victory at Aliwal removed the threat to the British rear. Smith, awarded a baronetcy for his generalship, soon moved to rejoin Gough. The reinforced British army then successfully attacked the main Sikh force at Sobraon on 10 February 1846. This victory led to the Treaty of Lahore that brought an end to the First Sikh War.

‘I never read an account of any affair in which an officer has shown himself more capable than this officer did of commanding troops in the field’. The Duke of Wellington praising Sir Harry Smith, 1846 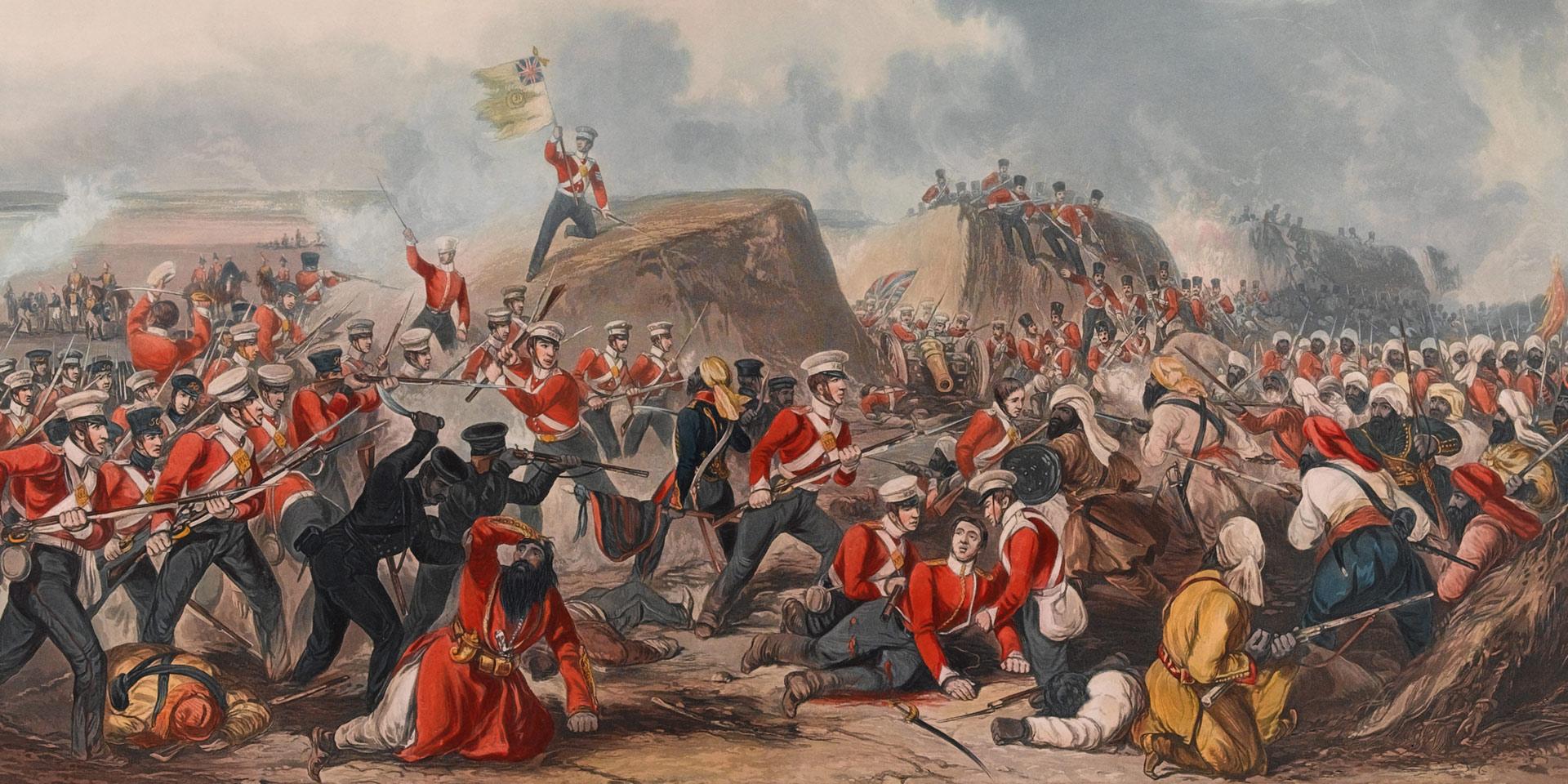 But peace did not last long. The Sikhs conceded large tracts of land to the British, who also appointed a resident to oversee the royal court. Two years on, a revolt led to the Second Sikh War (1848-49). This conflict also ended in a British victory and resulted in the annexation of the Punjab and the North-West Frontier.

The annexation of the Punjab, alongside the fighting qualities displayed by the Khalsa, led the British to recruit Sikhs into their military. The Sikhs were designated a ‘martial race’ and went on to provide a disproportionate number of recruits to the Indian Army.

They played a major role in safeguarding British rule during the suppression of the Indian Mutiny (1857-59). Somewhat ironically, they fought against many of the Hindu sepoys of the Bengal Army who had served on the British side in the Sikh Wars.

In the years that followed, the Sikhs proved to be among the most loyal soldiers, fighting in many campaigns with great distinction. During the First World War (1914-18), more than 100,000 Sikhs served in the Indian Army.

Sikh and British officers of Hodson's Horse during the Indian Mutiny, 1858 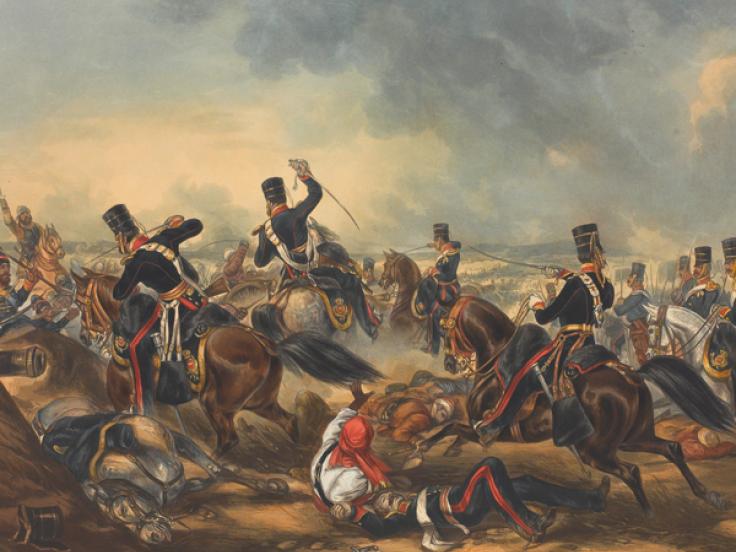