The Battle of Blenheim was fought on 13 August 1704 during the War of the Spanish Succession (1702-13). A decisive defeat for a Franco-Bavarian force by the allied English, Dutch and Austrian armies, it destroyed the myth of French invincibility and earned the British Army an enduring reputation for battlefield courage and discipline. 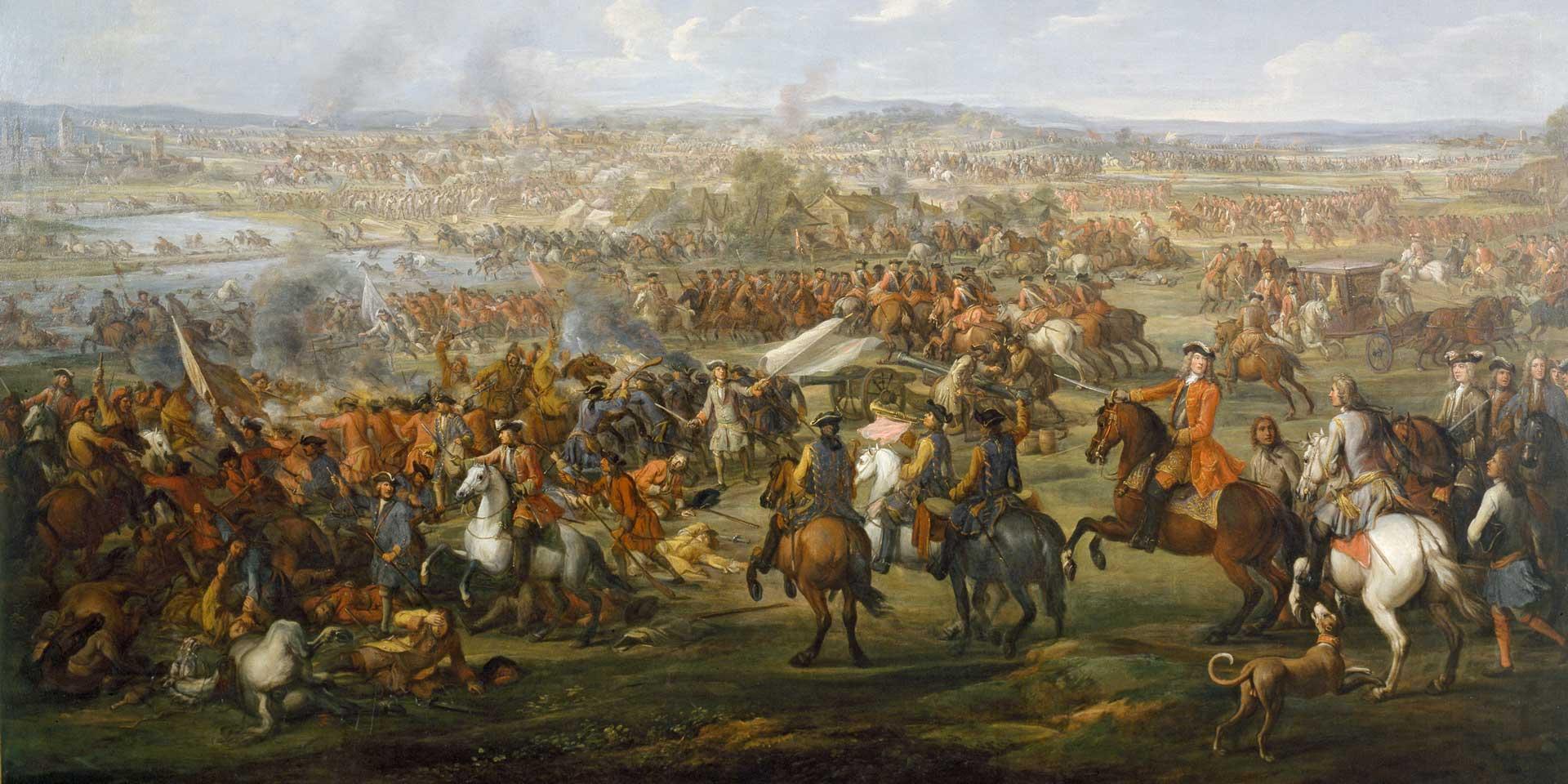 When King Charles II of Spain died in 1700 he bequeathed his throne and the Spanish possessions in the Netherlands, Italy and the Americas to Philip of Anjou, the grandson of King Louis XIV of France.

The prospect of a union between France and Spain alarmed many European states. Louis further alienated King William III by recognising the son of the deposed James II as England’s rightful king and cutting access to the lucrative Spanish trade.

England, Holland and Prussia supported the Habsburg Empire’s rival claimant to the Spanish throne, Archduke Charles. In 1701 they formed the Grand Alliance along with a number of smaller German states. In September 1702 Bavaria allied itself with France and Spain.

March to the Danube

In 1704 Franco-Bavarian forces threatened to capture Vienna and knock the Austrian Habsburgs out of the war, thereby jeopardising the Grand Alliance.

In response to this threat John Churchill, Duke of Marlborough, Captain-General of the English and Dutch forces in Europe, embarked on an audacious campaign that would switch the theatre of operations from the Spanish Netherlands to the Upper Danube.

Marlborough marched a mixed force of 40,000 British, Dutch and German troops 250 miles (400km) in five weeks. This extraordinary feat of strategy and logistics left his opponents in disarray. Marlborough's tactics included building bogus pontoon bridges to deceive the French into thinking Alsace was his target.

‘As we marched through the country… commissars were appointed to furnish us with all manner of necessaries for man and horse... the soldiers had nothing to do but pitch their tents, boil kettles and lie down to rest… Surely never was such a march carried on with more order… and less fatigue both to man and horse’.
Captain Robert Parker describing the march to Blenheim, 1704

On 2 July, following the swift but costly Battle of Schellenberg, Marlborough’s troops took the town of Donauworth in Bavaria. When the French and Bavarians avoided further battle or negotiation, Marlborough's troops laid waste to Bavarian territory in order to provoke a response from Maximilian II the Elector of Bavaria.

Marlborough again surprised the French, under Marshal Tallard, by undertaking a night march to join forces with an Imperial army commanded by Prince Eugene of Savoy. The Allies confronted the Franco-Bavarian forces around the village of Blenheim on 13 August.

The Battle of Schellenberg, Bavaria, 1704

The Franco-Bavarians were under the overall command of Marshal Count Camille de Tallard, who was assisted by Marshal Ferdinand de Marsin and the Elector of Bavaria, Maximilian II. They had at least 60,000 troops (69 battalions of infantry and 128 squadrons of cavalry) and around 90 cannon.

The Duke of Marlborough and Prince Eugene commanded 56,000 soldiers (51 battalions of infantry and 92 cavalry squadrons) and 66 guns. Only around two thirds of their men were British, the rest being German and Dutch.

Marlborough had been appointed Captain-General of the Allied forces in 1702. Although one of England’s senior generals, he was not a natural choice, and was even regarded as reckless by some of his contemporaries.

Yet he was soon to prove them wrong. Unusually for a commander of his era, Marlborough was prepared to manoeuvre to bring about a decisive battle, and was then able to react quickly and decisively as the tactical situation developed. 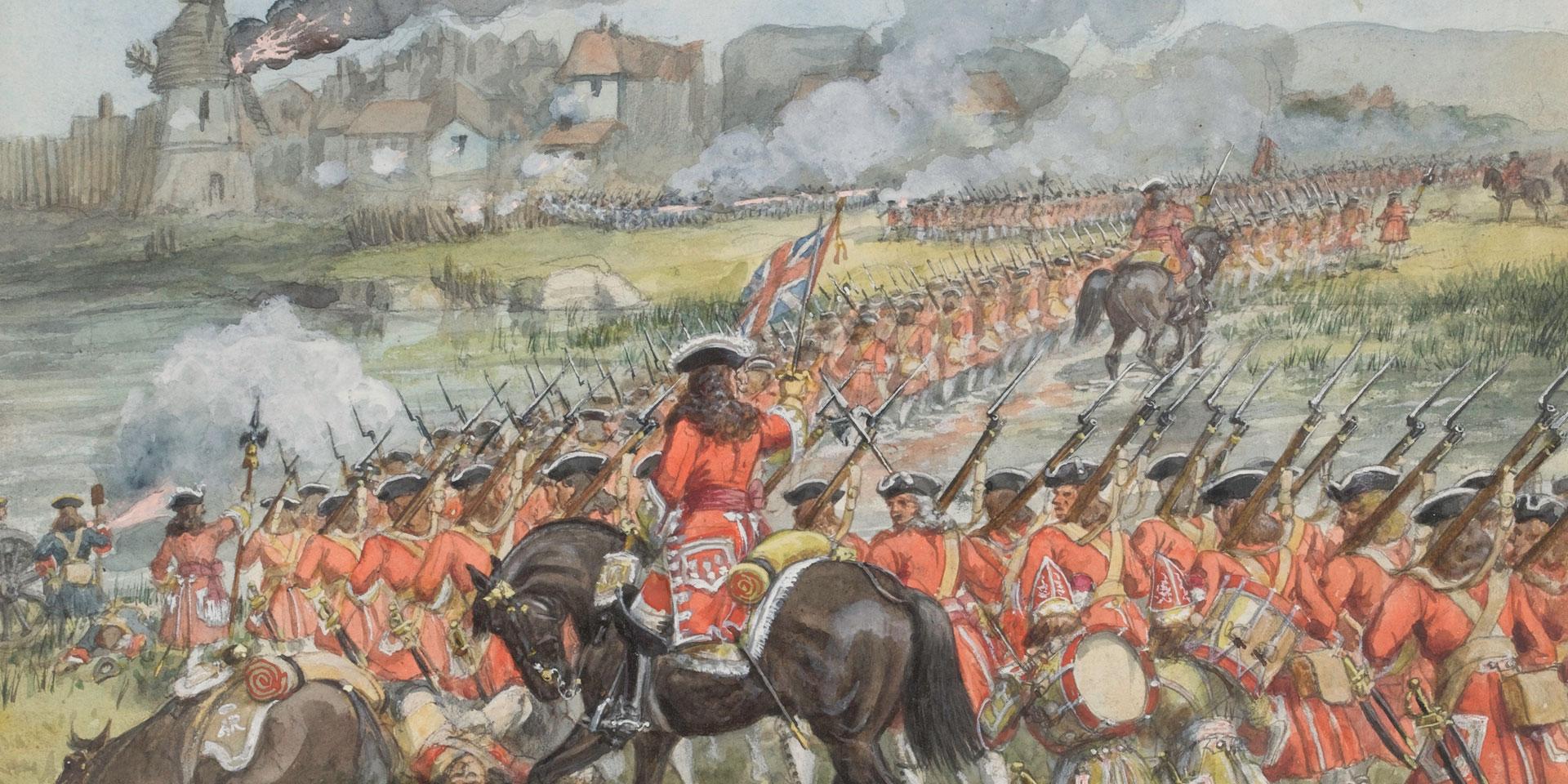 Although the opposing armies were almost equal in number, Tallard's forces appeared to hold the stronger position. They formed a defensive line, fortifying three villages, Blenheim, Oberglau and Lutzingen, with their right flank anchored to the River Danube, their left protected by woodland and with the Nebel stream to their front.

They did not expect Marlborough and Prince Eugene to seek battle, believing they would withdraw north as their supplies ran out. If an attack had been expected, Tallard would probably have moved more men out of the villages into the intervening ground. On the eve of battle, however, these areas were relatively weak.

Eugene’s forces were deployed to the right of the Allied line to meet the four-mile front of the French and Bavarians. With Eugene in position, Marlborough attacked the French right, assaulting the village of Blenheim. Tallard was forced to commit infantry and cavalry from the centre, but the additional numbers served only to hamper his men in the fight for the village.

On the centre-right the Allied commander Prince Holstein-Beck attacked Oberglau. However, the Franco-Bavarian forces fought them off.

Eugene, meanwhile, was attacking the Elector of Bavaria and Marshal Marsin’s troops. Eugene’s men took heavy losses and three assaults were beaten back. But this fixing operation stopped Marsin and the Elector from supporting Tallard elsewhere.

Marlborough’s flanks were stable enough for him to launch his attack on the weakened French centre. His men crossed the Nebel via pontoon bridges and deployed in a unique formation - two lines of infantry between two lines of cavalry - which was able to beat off French cavalry attacks.

The co-operation between Marlborough and Eugene proved successful once again as Austrian cavalry were deployed to help fight off these assaults.

Next, Marlborough launched his cavalry against the troops positioned in the open between Oberglau and Blenheim, at the point where Tallard’s and Marsin’s armies met. The Allies had superior numbers in this decisive engagement.

Marsin’s regiments fell back towards their infantry in Oberglau, leaving Tallard’s force isolated and exposed. The majority of Tallard's troops now retreated towards nearby Höchstädt. Most did not make it, plunging instead into the Danube where over 3,000 of them drowned.

The cavalry charge at Blenheim, 1704

The collapse of their centre also meant that the French right flank was reduced to a pocket, surrounded in Blenheim village. This force continued to fight, but eventually surrendered.

At the cost of 12,000 men killed and wounded, Marlborough and Eugene had inflicted a crushing defeat on the Franco-Bavarians. The latter suffered at least 20,000 casualties and 14,000 men captured, including Marshal Tallard. 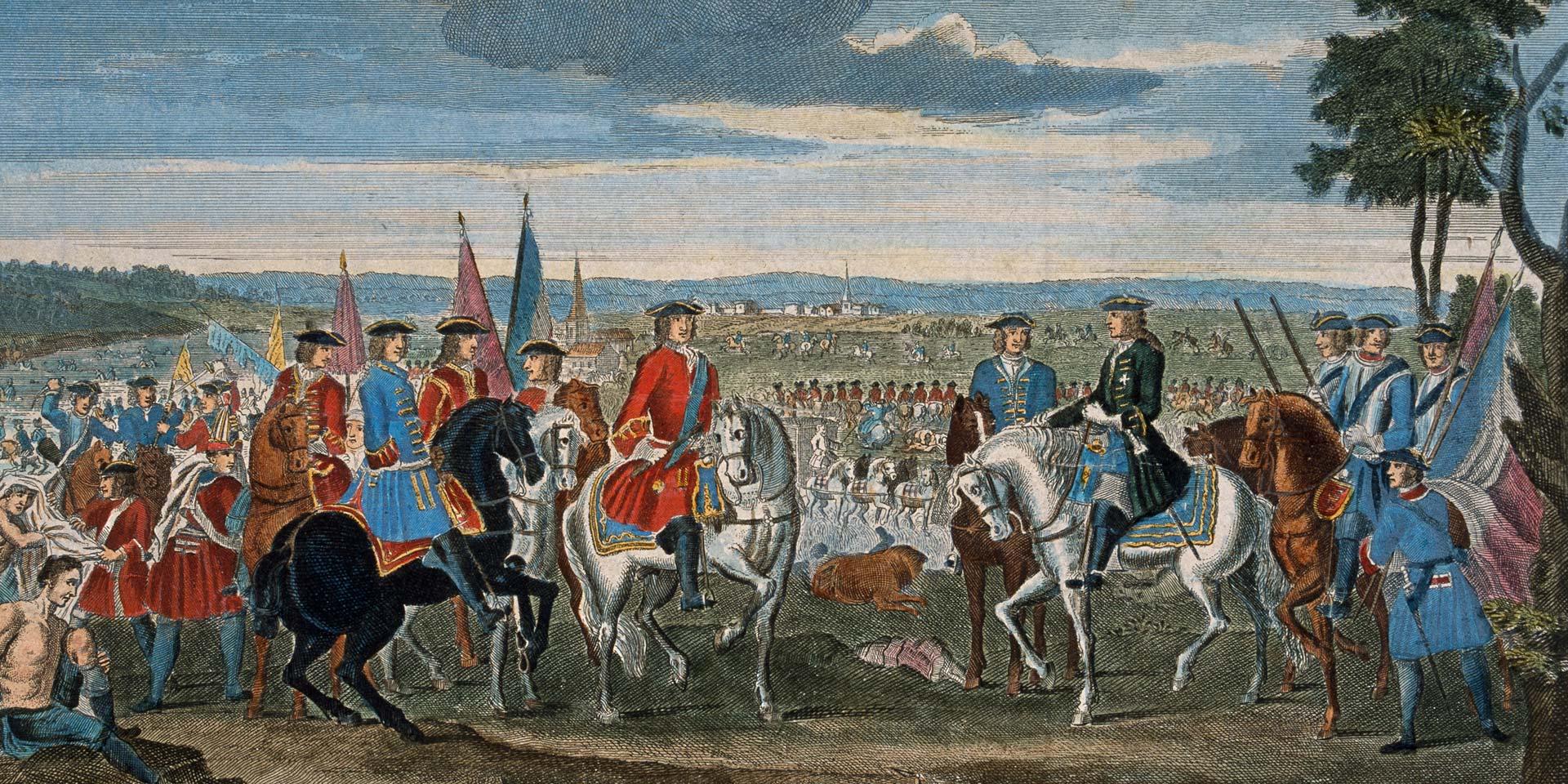 A model of coalition warfare, Blenheim was the first major Allied victory of the campaign. In the months that followed, the Allies occupied Munich, Augsburg, Ingolstadt and Ulm. The Treaty of Ilbersheim (November 1704) then confirmed Bavaria’s withdrawal from the war.

The victory also saved Vienna and secured the Grand Alliance. By the end of 1704 the Allies were preparing to carry the war into France itself.

Blenheim destroyed the myth of French invincibility and marked the beginning of a successful partnership between Marlborough and Eugene. This was one of a string of successes that saved Europe from French domination.

It also secured Marlborough’s status as Britain's best general and earned the British Army an enduring reputation for courage and discipline on the battlefield.

Silver medal commemorating the Battle of Blenheim and depicting Eugene and Marlborough, 1704

Among the trophies captured at Blenheim were 60 guns and 300 enemy colours, 1704

When Marlborough returned to England the nation acclaimed him. Showered with honours, he was granted the royal manor of Woodstock near Oxford and a grant for the construction of a palace on the site.

Blenheim Palace, designed by Sir John Vanburgh in an Italianate style, remains to this day one of the finest examples of English Baroque architecture. It is now a World Heritage Site. 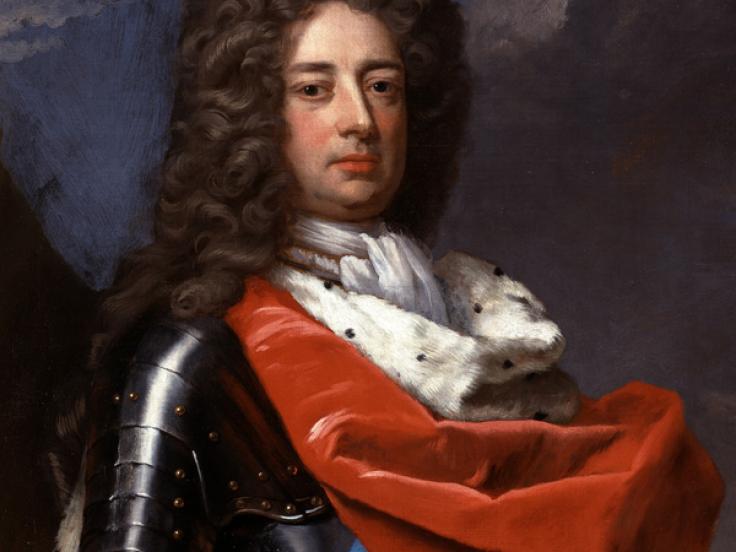 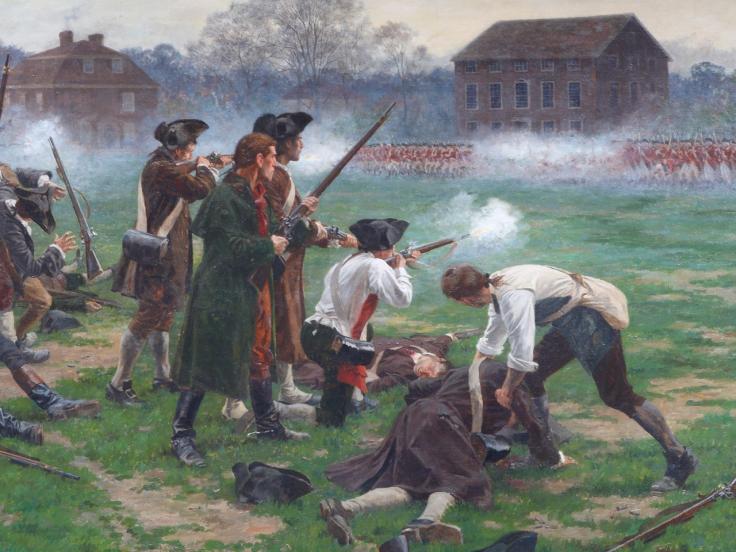