Fought during the Korean War (1950-53), the Battle of the Imjin (22-25 April 1951) was the bloodiest engagement endured by the British Army since the Second World War. For three days, the 29th British Independent Infantry Brigade Group thwarted the Chinese Spring Offensive. 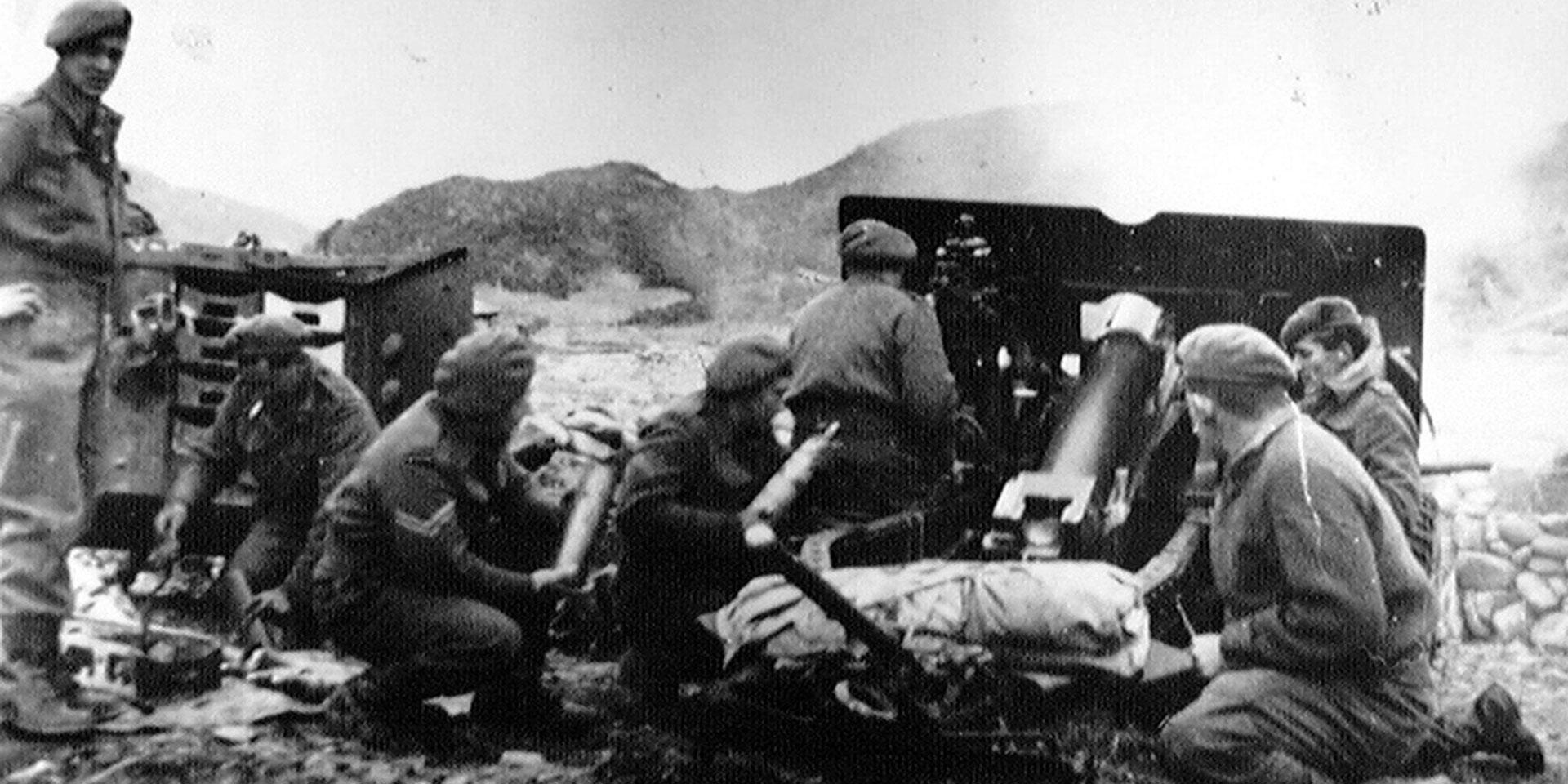 At the end of the Second World War (1939-45), American and Soviet concern over ‘spheres of influence’ led to the partition of Korea along the 38th Parallel. The country was split into the communist Democratic People’s Republic of Korea (North Korea) and the American-backed Republic of Korea (South Korea).

On 25 June 1950 the North Korean People’s Army (NKPA) invaded its southern neighbour. The United Nations (UN) called upon its members to support South Korea. American forces were sent in, later to be joined by troops from other countries, including Britain.

A captured Soviet-made T34. The North Korean invasion in June 1950 was spearheaded by over 100 of these tanks

British troops examine a machine gun captured during their advance from the Busan bridgehead, 1950

At first the North Koreans made rapid progress, taking the capital Seoul and driving back the South Koreans and Americans to a bridgehead around the port of Busan. Although some North Korean forces crossed the Nakdong River, General Douglas MacArthur’s troops managed to hold them off after the Waegwan bridge was blown.

By September, South Korean and UN forces had received reinforcements and were ready to counter-attack. A bombing campaign ensued against the NKPA and North Korea.

This was followed by an amphibious assault on 15-19 September at Incheon in the enemy rear. The landing cut the North Koreans’ communications and allowed the UN to break out of the Busan bridgehead. They advanced north, pursuing the enemy into North Korea. Pyongyang was captured and UN forces arrived at the Chinese border.

During November, against all intelligence assessments, the Chinese attacked in great strength. In freezing conditions, UN forces fell into headlong retreat. By the end of 1950, the Chinese were across the 38th Parallel and had captured Seoul. But eventually their offensive ran out of steam and the front line was stabilised.

In March 1951 a UN counter-offensive pushed the Chinese back and recaptured Seoul. This was the city's fourth conquest in a year, leaving it in ruins. As winter cleared, the UN dug in close to the 38th Parallel and in early spring advanced north to create a buffer in front of Seoul. In April the Chinese counter-attacked, aiming to break through to the city. 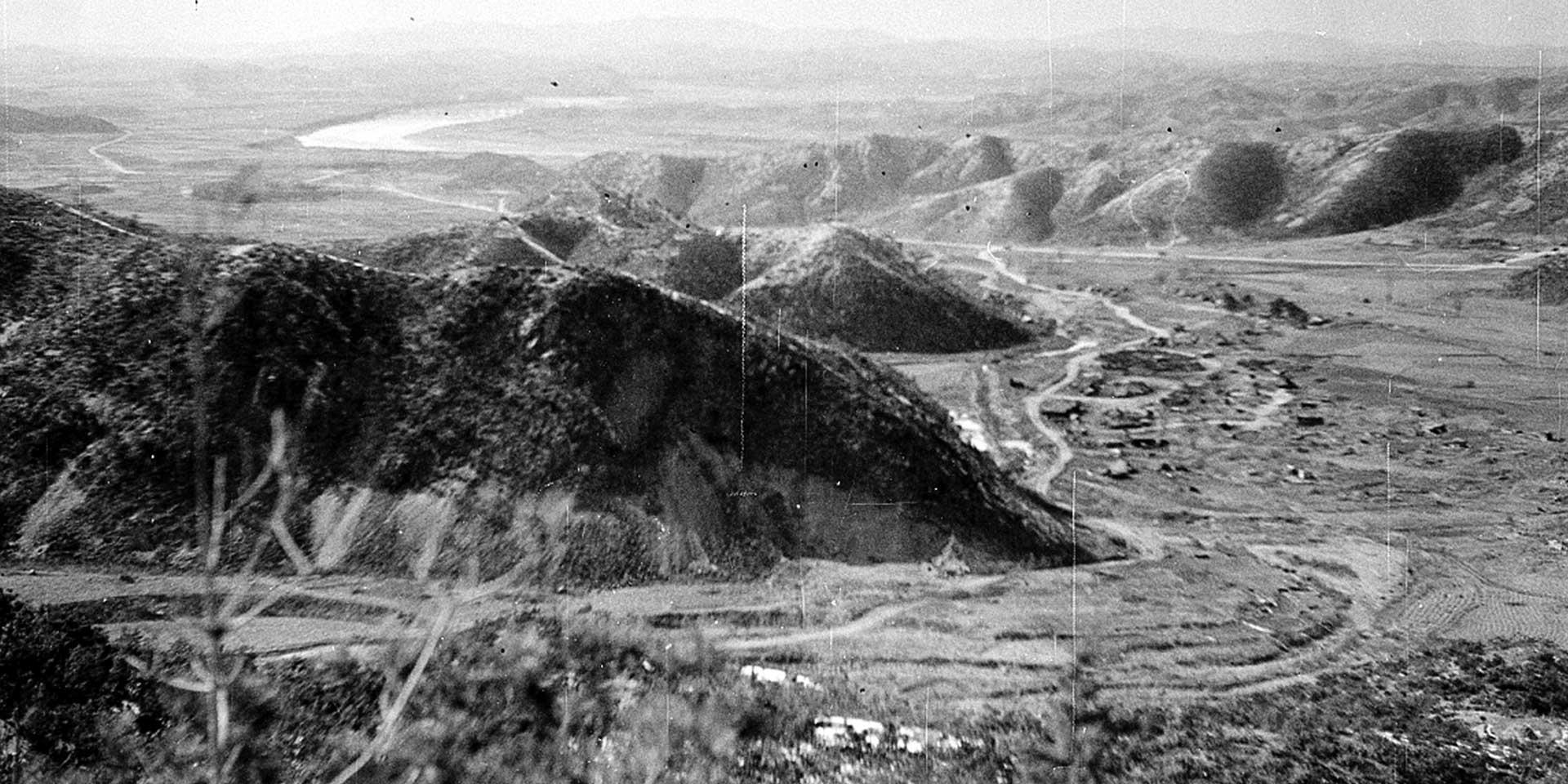 29th Brigade’s battalions were positioned on hilltops south of the Imjin River while the Belgian Battalion was north of the river on Hill 196. The frontage was more suited to a division than a brigade but it was only deemed a temporary line so the positions were neither mined nor wired.

The battalions were widely dispersed and unable to provide mutual support. To the rear lay the 8th Hussars’ tanks and the guns of 45 Field Regiment. There was no medium or heavy artillery support available.

On the night of 22 April Chinese infantry waded across the Imjin. On the left flank the Gloucestershire Regiment were heavily engaged, as were the Northumberland Fusiliers to the east, with the two battalions separated by the heights of Gamak San; the highest feature in the area and unoccupied by the British. Thanks to diligent reconnaissance, the Chinese knew the dispositions of 29th Brigade and the gaps between units.

By first light on 23 April the Glosters were being forced into an ever-diminishing perimeter on Hill 235 while a company of the Fusiliers was overrun on its hilltop. Throughout the night the guns of 45th Field Regiment had been firing in support of the infantry.

As dawn broke, the gunners came under small arms fire from the Chinese, now occupying Gamak San, forcing them to withdraw southwards. Centurion tanks of the 8th Hussars now moved up the valley to provide support to the infantry and evacuate their wounded. The Chinese went to ground to avoid Allied airstrikes.

A tank crew from the 8th (King’s Royal Irish) Hussars make a meal during their service on the Imjin, 1951

This respite allowed the Royal Ulster Rifles to move forward and occupy Hill 398 to the east of the Fusiliers and Route 11 - the only possible line of withdrawal for the brigade. Meanwhile, the Belgian Battalion fought its way back across the river and redeployed to the south. During the night of 23-24 April, Chinese reinforcements crossed the Imjin, tasked with eliminating the Glosters. The fighting continued with rising casualties on both sides.

On 24 April an attempt was made to reinforce the Glosters. But the mission failed as the Chinese now surrounded them and the terrain was impassable. The Glosters were on their own, clustered on Hill 235 under repeated assaults and mortar fire.

By now the entire Chinese 63rd Corps was across the river and threatening to entrap the other battalions. But still the Fusiliers, Glosters and Ulster Riflemen clung on, repelling attack after attack. When the weight of the enemy assaults seemed overwhelming, they even directed their own artillery fire on to their positions.

Bugle recovered from a Chinese position in Gloster Valley on the Imjin, 1951

As dawn broke on 25 April, the valley was shrouded in mist allowing the Chinese to infiltrate undetected. The 8th Hussars’ tanks were directed to advance up the valley and render fire support to the Fusiliers and Riflemen. Lingering ground mist obscured the route and, as two Centurions became bogged down, Chinese soldiers wielding sticky bombs attacked.

The Centurions swept each other’s hulls with machine-gun fire to drive them off. Once at the head of the valley, they engaged the enemy, particularly those massing on Gamak San.

By mid-morning the order was given to withdraw. The exhausted men were forced to march to safety along Route 11, which was covered by enemy fire. The Fusiliers withdrew under the covering fire of the tanks while many of the Ulster Riflemen marched south-east over the hills and thus avoided the valley floor that was now under heavy fire.

The withdrawal was slow and many of the wounded and exhausted were loaded on the backs of the tanks. The Chinese swept down from the hills along the west of the valley to intercept them, but they were unable to prevent their withdrawal, despite inflicting many casualties on their infantry passengers.

A further crisis then arose as the Ulster Riflemen trudging down from the hills to the east were attacked. The armoured rearguard stood defiant again and covered their retreat, firing into the approaching Chinese.

Only the Glosters had not withdrawn. That night they received permission to break out, but, totally encircled, most were captured. The brigade had lost a quarter of its strength, suffering 1,091 casualties, including 622 of the Glosters. The US had lost 1,500 men killed or missing in action, the South Koreans 8,000 and the other UN forces about 1,000 men. Chinese casualties were estimated at 70,000. 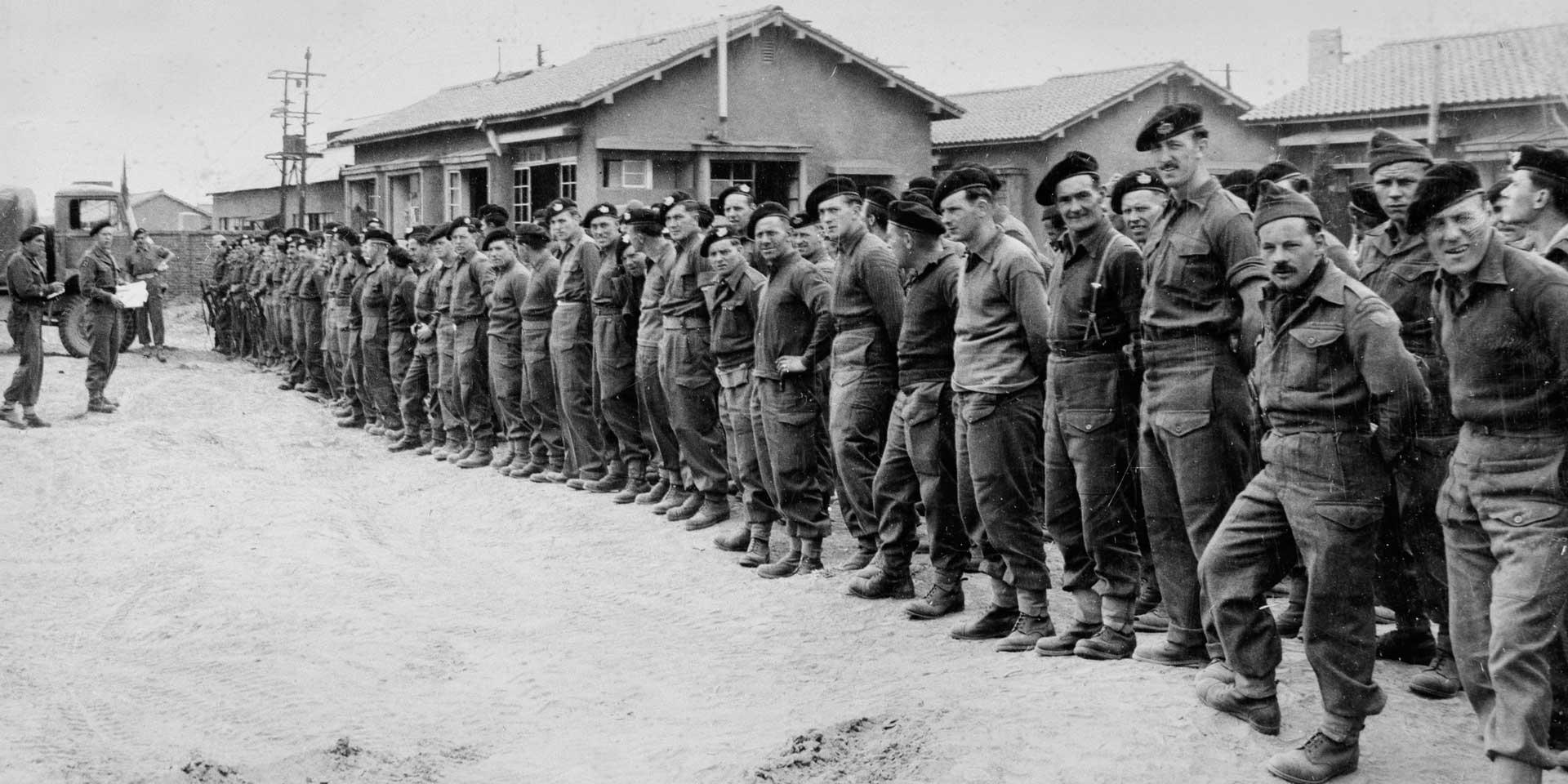 'We had it pretty sticky for a few days - our casualties up to Wednesday were approx. 1000. The Gloucesters were over 600 and the other two battalions about 150 each.' Letter from Lance-Corporal Arthur Stone to his parents, 29 April 1951

29th Brigade’s stand provided time for the UN forces to re-group and block the Chinese advance on Seoul. The Imjin fighting also marked the end of the mobile phase of the war. Stalemate ensued alongside the strategic bombing of North Korea and a naval blockade. The failure of the offensive demonstrated that the Chinese and North Koreans did not have the capacity to defeat the UN in battle.

In June the Soviets indicated they were willing to seek a settlement through arbitration. Negotiations began on 10 July, but a further two years elapsed before an armistice was agreed in July 1953. Korea remains divided.

Spoon used in a Chinese prison by Private James Wood, The Gloucester Regiment, who was captured on the Imjin, 1951

All units of 29th Brigade had fought with great courage, but the Gloucestershire Regiment and 170 Battery of the 45th Field Regiment, Royal Artillery, were both awarded a US Presidential Unit Citation, the highest American award for heroism and collective gallantry. The 29th Brigade’s performance on the Imjin demonstrated that the British soldier in defence was a stubborn and formidable foe.

'Without thought of defeat or surrender, this heroic force demonstrated superb battlefield courage and discipline. Every yard of ground they surrendered was covered with enemy dead until the last gallant soldier… was overpowered by the final surge of the enemy masses.

'The 1st Battalion, Gloucestershire Regiment and Troop C, 170th Independent Mortar Battery displayed such gallantry, determination, and esprit de corps in accomplishing their mission under extremely difficult and hazardous conditions as to set them apart and above other units participating in the same battle.' US Presidential Unit Citation, 1951 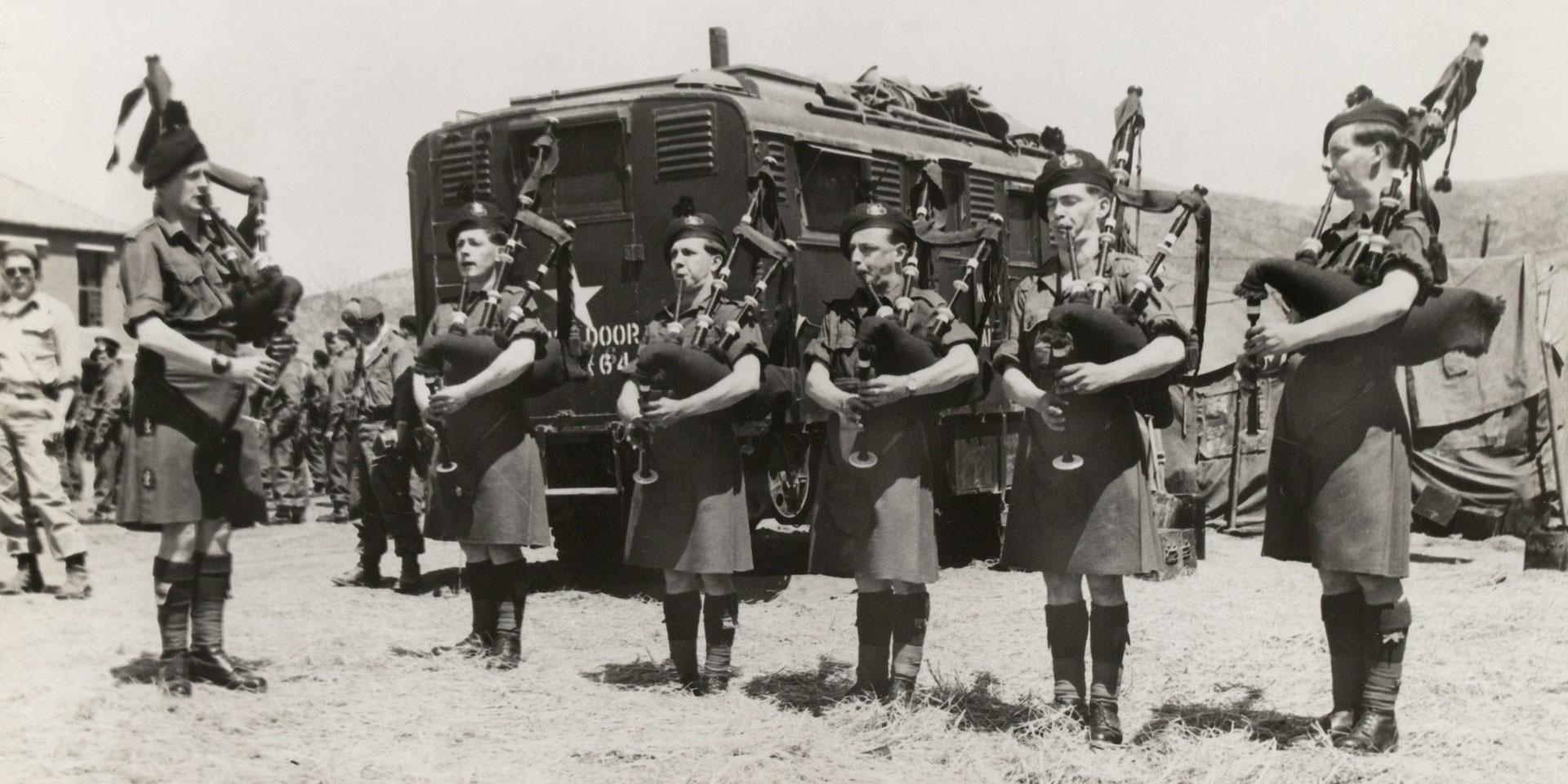 The Korean War has never officially ended. Skirmishes still occur along the border, which remains the most heavily militarised frontier in the world. Today, North Korea is an isolated communist state. South Korea is a democracy with a burgeoning economy.

Yet its people have never forgotten the debt they owe to the men who fought for their liberty. Korean War veterans are welcomed whenever they visit South Korea. Hill 235 is now officially named ‘Gloster Hill’.