1st Battalion The Northumberland Fusiliers after the Battle of St Eloi, 1916 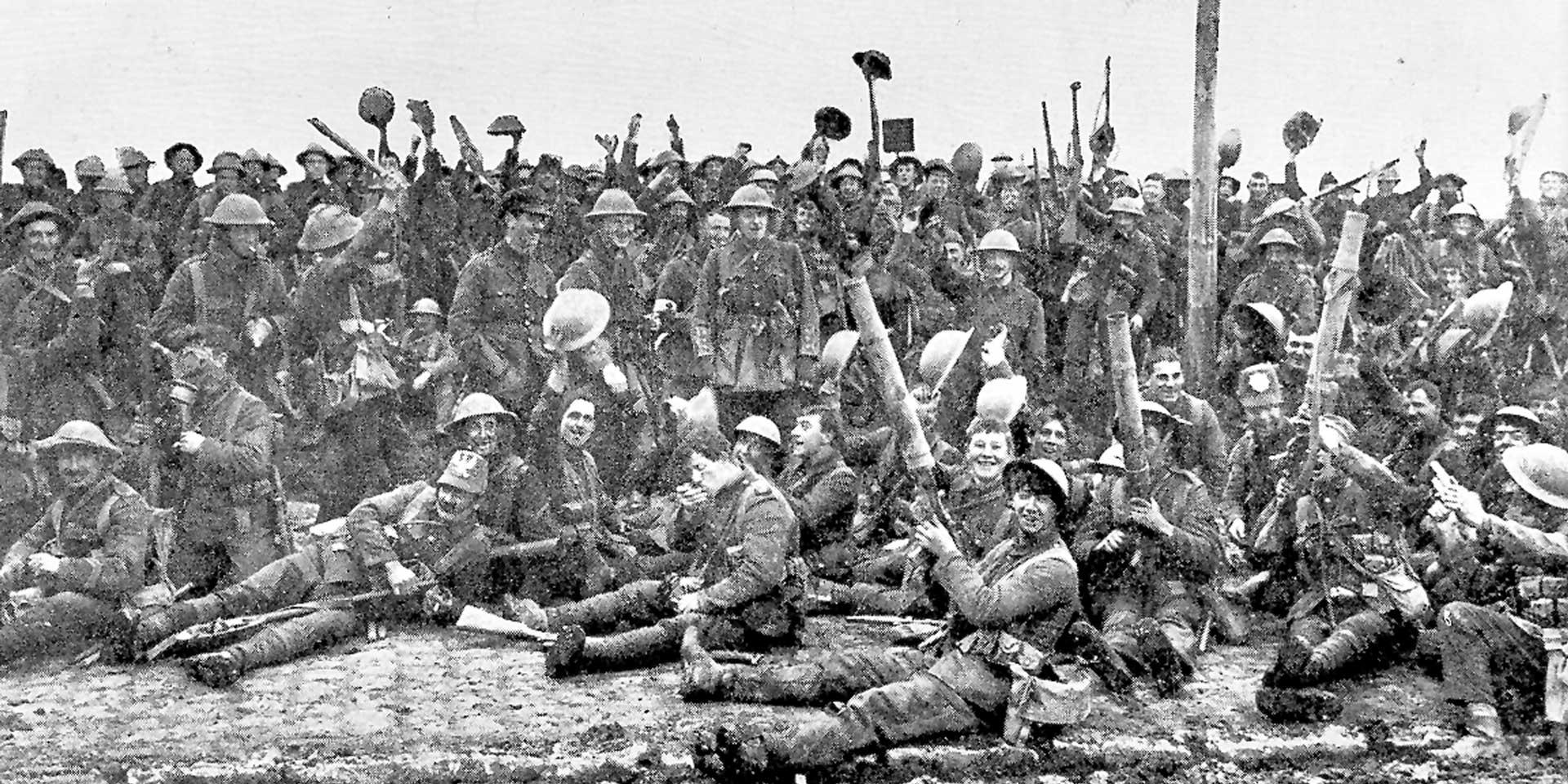 1st Battalion The Northumberland Fusiliers after the Battle of St Eloi, 1916

In 1674, King Charles II signed the Treaty of Westminster bringing an end to three years of conflict with the Dutch Republic. As part of the settlement, four auxiliary regiments were raised and transferred to the Dutch army for service against the French. One of these was formed in Ireland under Daniel O’Brien, Viscount Clare.

In 1685, the regiment briefly returned to England to help Charles’s brother and successor, James II, suppress a rebellion. Three years later, it accompanied William of Orange, leader of the Dutch Republic, on his successful invasion of England. Remembered as the ‘Glorious Revolution’, this resulted in William replacing James on the throne.

Now formally part of the British Army, the regiment continued to fight for William during the Nine Years War (1689-97). First, it served in Ireland, seeing action at the Battle of the Boyne (1690) and helping lay siege to the towns of Athlone and Limerick (1691). It switched to Flanders in 1692, before returning to Ireland in 1698.

In 1751, it was officially named the 5th Regiment of Foot, recognising its senior position in the line infantry order of precedence.

In 1768, Hugh Percy, the eldest son of the Duke of Northumberland, became colonel of the 5th Foot. He stayed in post for 16 years, leading it throughout the American War of Independence (1775-83).

Towards the end of that conflict, in 1782, the regiment gained its official association with Northumberland, becoming the 5th (Northumberland) Regiment of Foot.

Having been shipped to Boston in 1774, the regiment was already in theatre at the outbreak of fighting in America. It took part in various battles, including Lexington and Bunker Hill (both 1775), Long Island (1776) and Brandywine Creek (1777).

It moved to the West Indies in 1778, where it served as marines. It added a white hackle to its uniform to mark a famous victory over a much larger French force on the island of St Lucia that same year.

Its next foreign posting was to Canada in 1787. It stayed there for ten years, before returning to Britain. In 1799, it formed a 2nd Battalion, which lasted until 1816.

Soldiers of the 5th (Northumberland) Regiment of Foot, c1792

During the early years of the Peninsular War (1808-14), 1st Battalion fought at Roliça and Vimeiro (both 1808), and Corunna (1809), before leaving to join the Walcheren expedition in the Netherlands.

It was replaced by 2nd Battalion, which served at Bussaco (1810), Fuentes d’Onor and Ciudad Rodrigo (1812). Both battalions were then in action at Salamanca (also 1812). It was for this service on the Peninsula that the regiment gained nicknames such as ‘The Fighting Fifth’ and ‘Lord Wellington's Bodyguard’.

On St George’s Day in 1836, it was designated a fusilier unit, becoming the 5th Regiment of Foot (Northumberland Fusiliers). From then on, it wore a badge featuring a flaming grenade. It was also allowed to incorporate its ‘ancient badge’, an image of St George slaying a dragon.

After the Napoleonic Wars, the regiment spent time in the West Indies, the Mediterranean, Ireland and Mauritius. In 1857, it raised a 2nd Battalion again. This unit remained at home, while 1st Battalion was sent to serve in the Indian Mutiny (1857-88).

1st Battalion returned to India in 1866, staying for 14 years and forming part of the Peshawar Field Force during the Second Afghan War (1878-80). It was replaced in India by 2nd Battalion in 1880. The latter took part in the Black Mountain Expedition on the North-West Frontier in 1888.

1st Battalion sent a detachment to West Africa for the Fourth Ashanti War in 1895. The entire battalion then fought in the Sudan in 1898 and on the North-West Frontier of India in 1908.

Indeed, the regiment raised two additional regular battalions in 1900 to meet the demands of this conflict. 3rd Battalion served in South Africa, while 4th Battalion was stationed in Ireland. However, these were both disbanded in 1907.

The Northumberland Fusiliers mess during the Black Mountain expedition, 1888

The Northumberland Fusiliers raised 50 Reserve, Territorial, New Army, Garrison and Home Service battalions for the First World War (1914-18), a number only bettered by the all-territorial London Regiment. 29 of these battalions served overseas, earning 67 battle honours in France and Flanders, Salonika, Gallipoli, Egypt and Italy. The regiment sustained over 16,000 dead.

Of its regular units, 1st Battalion spent the whole of the conflict on the Western Front, arriving there in August 1914 and going on to fight in many of the main engagements. 2nd Battalion was in India on the outbreak of war, but deployed to France in January 1915. Later that year, it was transferred to Egypt and then to Salonika.

The 1st Battalion served in Ireland during that country's War of Independence (1919-21) and then deployed to Germany on occupation duties. Following a spell of home service, it then spent time in the West Indies and Egypt (1931-34), before moving to Palestine in 1937 where it helped suppress the Arab Revolt (1936-39).

Meanwhile, 2nd Battalion served in Iraq in 1920 and then undertook a long spell of garrison duties in India. It deployed to Shanghai in 1930 and after several years at home moved to Palestine in 1936.

During the 1930s, the regiment's two regular battalions were converted into heavy machine gun units. The regiment also gained a ‘Royal’ prefix in 1935 to recognise its wartime service.

1st Battalion was in the Middle East on the outbreak of the Second World War (1939-45) and went on to fight in the North Africa campaign. This service included Tobruk (1941) and El Alamein (1942). It spent much of 1943 in Syria before deploying to Italy where it spent the rest of the war.

In 1939, 2nd Battalion deployed to France with the British Expeditionary Force, but was evacuated from Dunkirk in 1940. It spent the next two years on home defence duties. In 1943, it joined the Tunisian campaign before landing at Salerno in Italy.

The regiment also raised eight Territorial and hostilities-only battalions during the conflict. These served as infantry and machine gun battalions, but also in motorcycle, reconnaissance and searchlight roles. They served at home, in North Africa, Italy, North-West Europe and the Far East.

In 1948, the regiment’s two regular battalions, then stationed in Gibraltar and the Middle East respectively, were merged into one. This went on to serve in Korea in 1950-51 and then garrison Hong Kong in 1951-52. After a spell at home, the regiment deployed to Kenya during 1953-55.

In 1958, it had joined the other three English fusilier regiments to form The Fusilier Brigade. Ten years later, in April 1968, these four regiments merged to become The Royal Regiment of Fusiliers. The Northumberland Fusiliers were designated as the new unit's 1st Battalion. 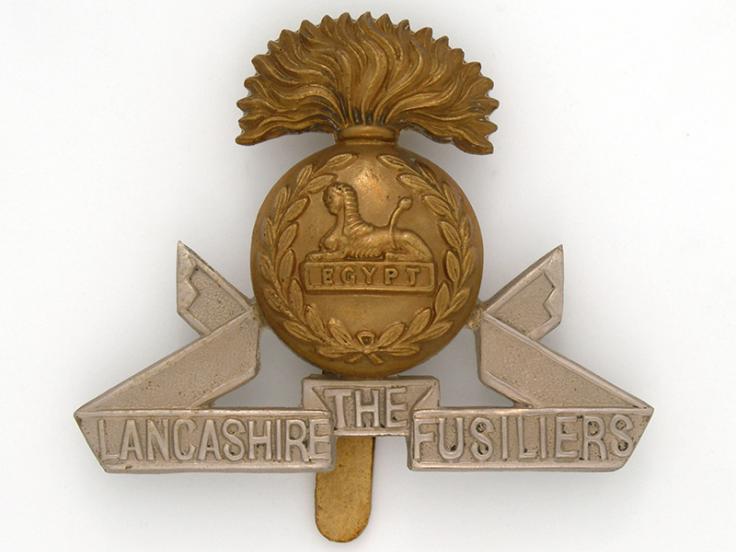