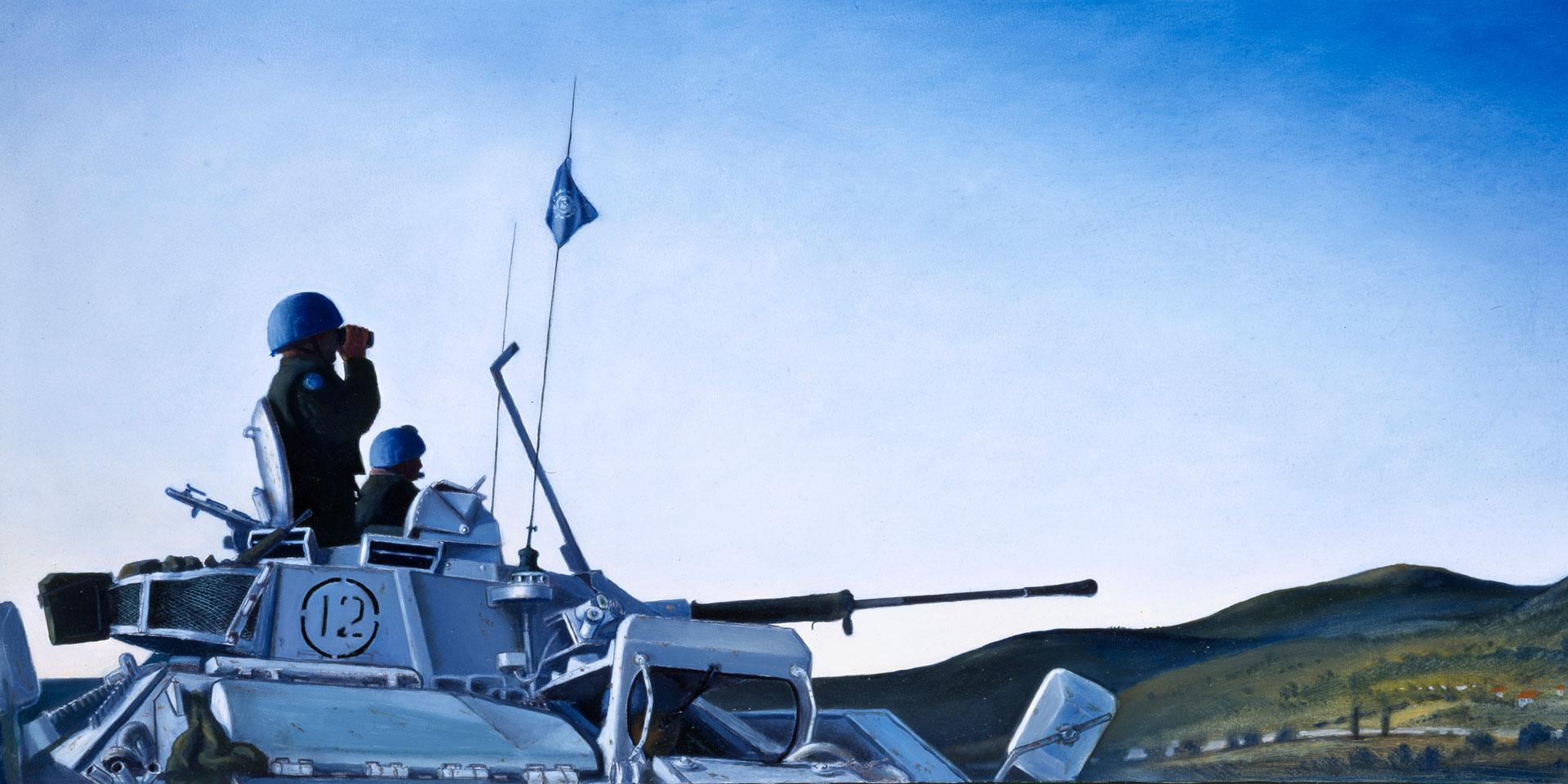 Following the break-up of Yugoslavia in 1991, and fighting between Serbs and Croats in Croatia, a civil war erupted in the new Republic of Bosnia-Herzegovina.

Bosnia had a mixed population of Muslims, Serbs and Croats. In 1992, the Bosnian Serbs attacked their neighbours, seizing large tracts of land which they then ‘ethnically cleansed’ of non-Serbs.

As the war went on, the Croats and Muslims also carried out ethnic cleansing. An estimated 2 million people were driven from their homes.

In September 1992, the United Nations (UN) authorised the deployment in Bosnia of a ‘Protection Force’, UNPROFOR. This was tasked with protecting the aid convoys run throughout the region by the United Nations High Commission for Refugees (UNHCR).

The UN troops were often referred to as ‘peacekeepers’, but this was not their role. There was no peace to keep in Bosnia, and UNPROFOR did not have the mandate to enforce a ceasefire.

Although several British Army observers, medics and liaison staff were already on the ground in Sarajevo and elsewhere, Britain’s main initial contribution to UNPROFOR was a battlegroup based around 1st Battalion The Cheshire Regiment and a Reconnaissance Squadron of the 9th/12th Lancers. Around 2,400 troops deployed under Operation Grapple in November 1992.

Helmet worn by a member of the Bosnian forces, c1995

Members of The Royal Anglian Regiment meet the locals, c1993

The British presence in Bosnia was later reinforced, with units normally spending six months in Bosnia before being relieved. The British contingent’s area of responsibility was in Muslim-Croat territory in central Bosnia. This included the towns of Vitez and Gornji Vakuf.

Within months of their arrival, the British found themselves in the middle of a vicious war-within-a-war as Croats and Muslims turned on each other, while also fighting the Serbs.

The UN successfully brokered an end to this conflict in February 1994. In addition to protecting the aid convoys, one of the British contingent’s main tasks was to ensure freedom of movement within the Muslim-Croat Federation.

Thanks to the British Army's experience in Northern Ireland, the British contingent proved to be particularly adept at patrolling, forging links with the local population, and gathering intelligence. 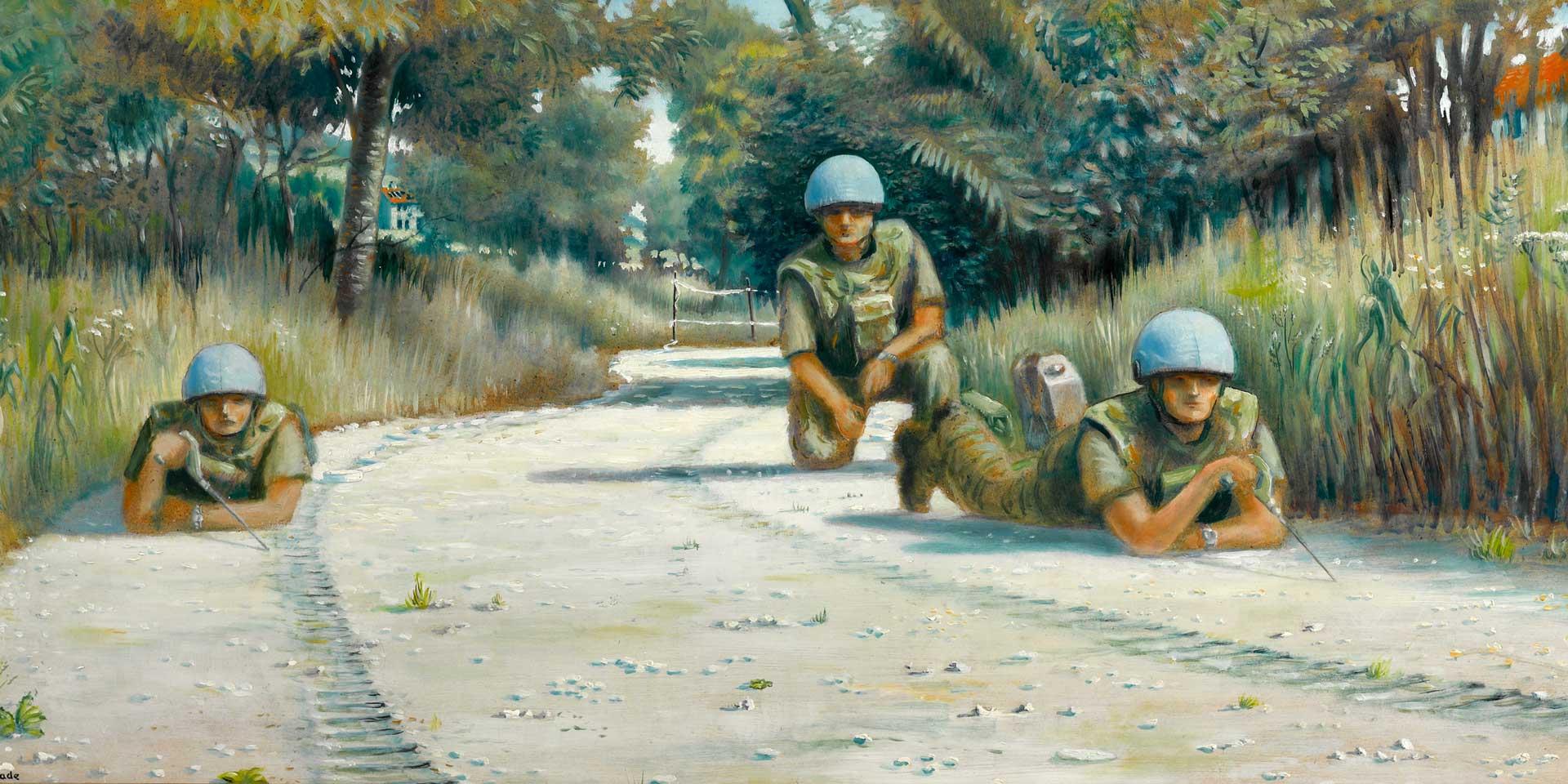 Hostilities continued between the Muslims and Croats on one hand and the Serbs on the other. Sarajevo, the Muslim-held capital city, remained in a state of virtual siege, while Serb attacks on Muslim towns in the east of the country led the UN to declare some of them ‘safe areas’.

In June 1995, to deter air attacks against them, the Bosnian Serbs temporarily took 350 UN troops hostage, including 33 members of The Royal Welch Fusiliers who were serving in the ‘safe area' of Gorazde.

A British Army Warrior vehicle in the Bosnian hills, c1993

'It was the first time that British forces had been fired on under the NATO mandate in Bosnia… So, it was getting dark by the time I arrived at Battlegroup headquarters. I turned out quite a lot of heavy armoured vehicles around headquarters, lined the entrance and the stairs… with British soldiers - the meanest, ugliest ones I could, armed to the teeth… We’d planned the meeting and we had very assertive uncompromising body language, and I said to the local Serb military commander: this is what has happened, this is not acceptable, you are very lucky that we… just fired 80 rounds of 5.56 back at you. I’d have been quite within my rights to bring to bear all the firepower of my Battlegroup... Warrior main armament, Milan missiles, mortars, artillery and air strikes. And I had the authority to do this.

'Now I’ve chosen not to because I think this is probably a bored and undisciplined soldier or an irresponsible local commander, but you should be under no illusions that we have re-enforced this area with a considerable amount of combat power… If there’s any more cease fire violations… you should be absolutely clear that… I have unlimited authority to use all this considerable force - and we know how to use it.' Brigadier Ben Barry, 2009

British UNPROFOR troops outside a destroyed mosque near Vitez, Bosnia, 1994 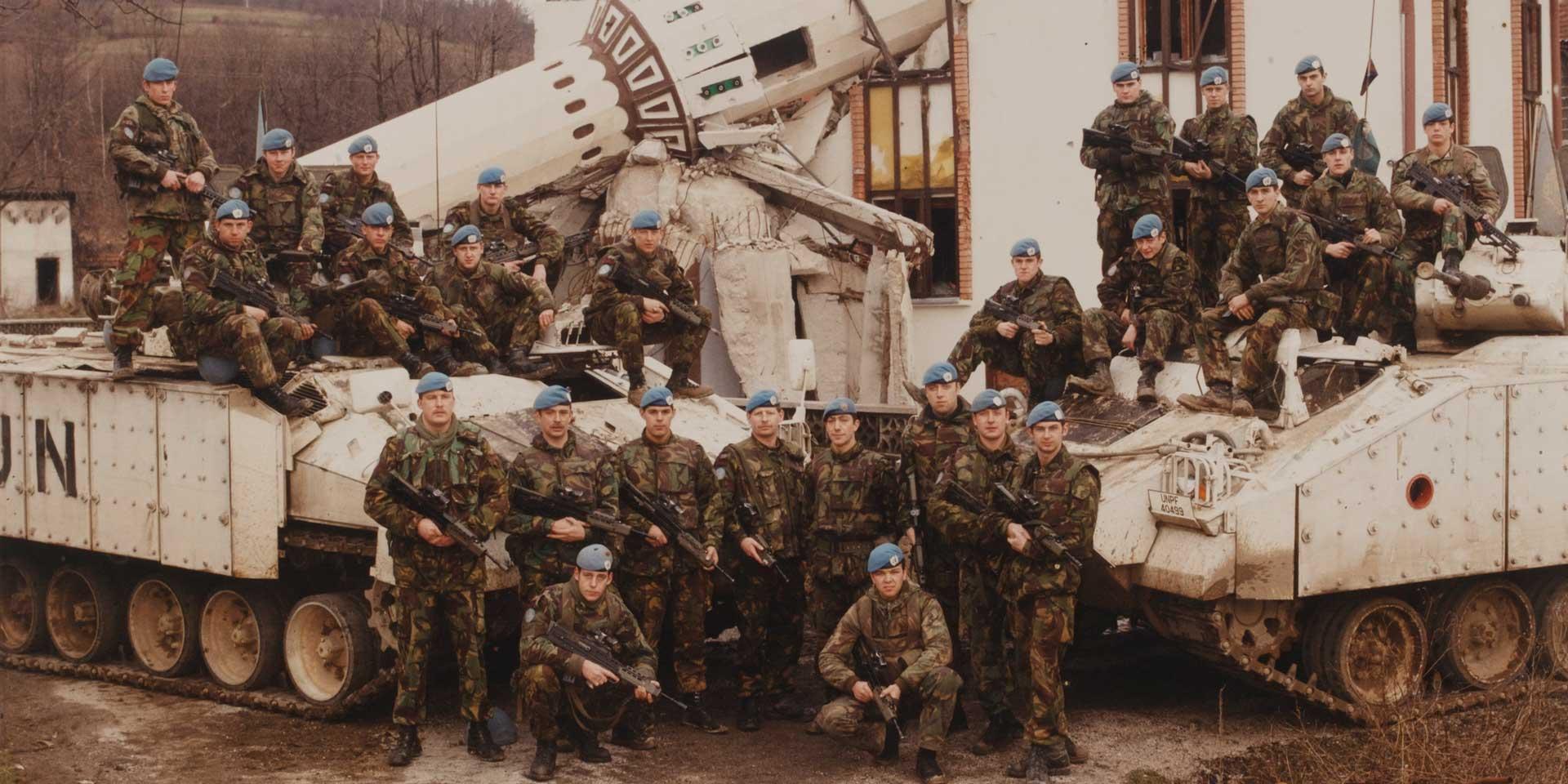 British UNPROFOR troops outside a destroyed mosque near Vitez, Bosnia, 1994

In July and August 1995, the Bosnian Serbs massacred thousands of Muslims following their capture of the 'safe areas' of Srebrenica and Zepa. This was followed by a mortar attack on a crowded market place in Sarajevo.

The UN then empowered the North Atlantic Treaty Organisation (Nato) to act, and air strikes were authorised against the Bosnian Serbs.

In the end, Nato bombing, coupled with a major offensive by the Croatian Army, brought the Serbs to the conference table. A ceasefire was agreed on 5 October 1995 and the three factions signed the Dayton Peace Agreement on 21 November.

This brought an end to the fighting and, after some adjustments of the former front line, left Bosnia divided approximately in half: the north and east under Serb control and the south and west under the Muslim-Croat Federation.

At the end of 1995, a Nato peace implementation force known as IFOR replaced UNPROFOR. Its task was to ensure that the three factions adhered to the terms of the Dayton Peace Accord.

IFOR enforced restrictions on the size, movement, training and weaponry of the factions’ armies. It also supported the International Police Force and the UNHCR in their work, as well as providing a secure environment in which elections could take place.

The British IFOR contingent formed part of Multi-National Division South West, which had its headquarters in Serb-held Banja Luka.

A Challenger tank of 1st The Queen’s Dragoon Guards near Banja Luka, Bosnia, 1996 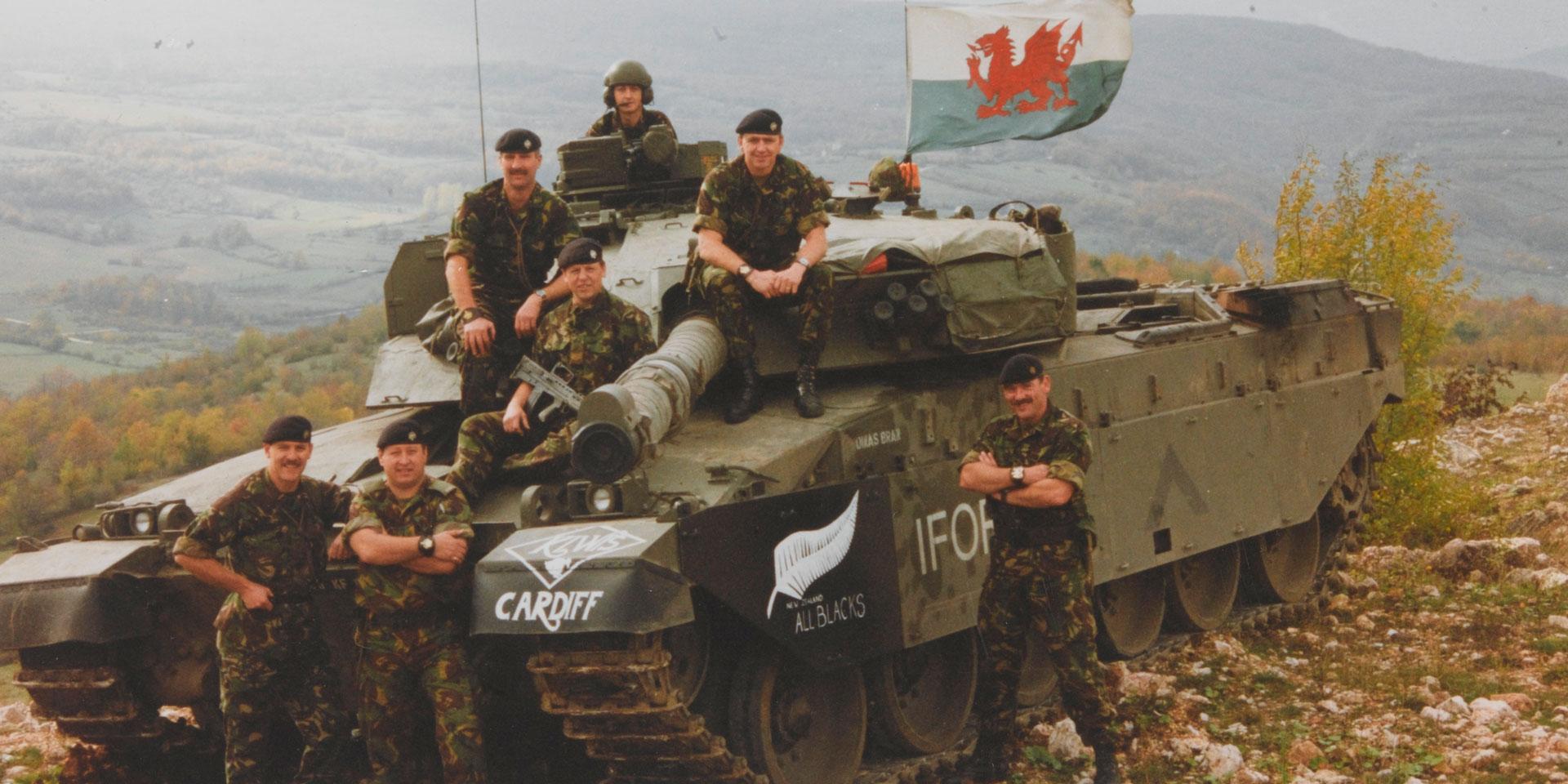 A Challenger tank of 1st The Queen’s Dragoon Guards near Banja Luka, Bosnia, 1996

After a year, IFOR was replaced by a Stabilisation Force, SFOR, which had the mission of ‘peace-building’. In the years that followed, the number of British troops committed to Bosnia was reduced.

In late 2004, SFOR was replaced by the European Union Force Bosnia and Herzegovina (EUFOR). Its first commander was Major-General David Leakey.

Today, EUFOR has around 600 soldiers from across Europe deployed in Bosnia. Its duties include helping to monitor elections and mentoring local forces.

The most recent British contingent of 120 troops from 1st Battalion The Royal Gurkha Rifles arrived in the country in September 2019.

Between 1992 and 2019, 59 British soldiers were killed in Bosnia and many more injured. Many of the deaths were caused by accidents on Bosnia’s poor roads, made treacherous during bad weather.

'I think we’ve got a responsibility to make sure things run smoothly and make sure that we have as much stability in the region as possible.' Defence Secretary Gavin Williamson, 2018 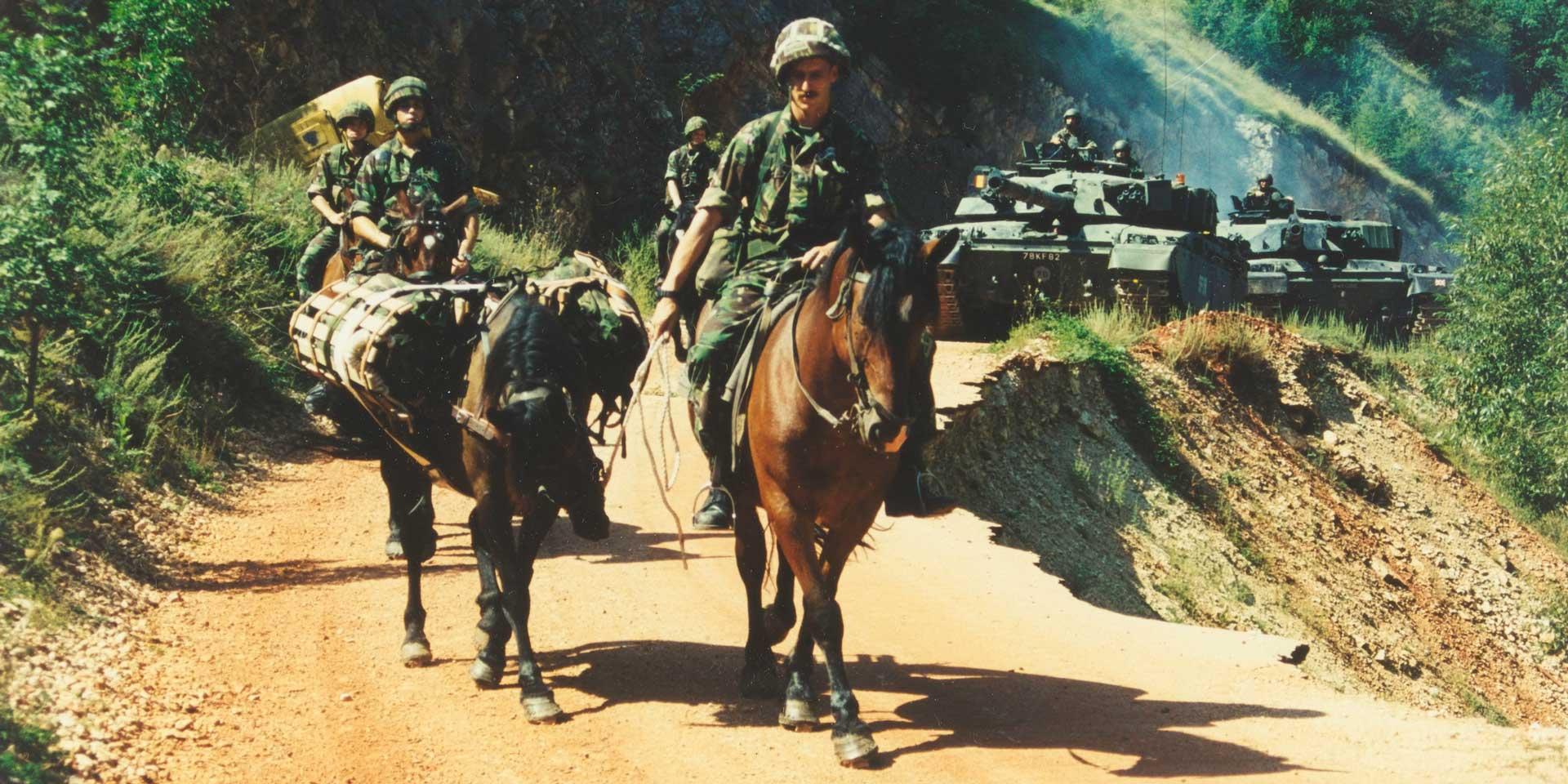 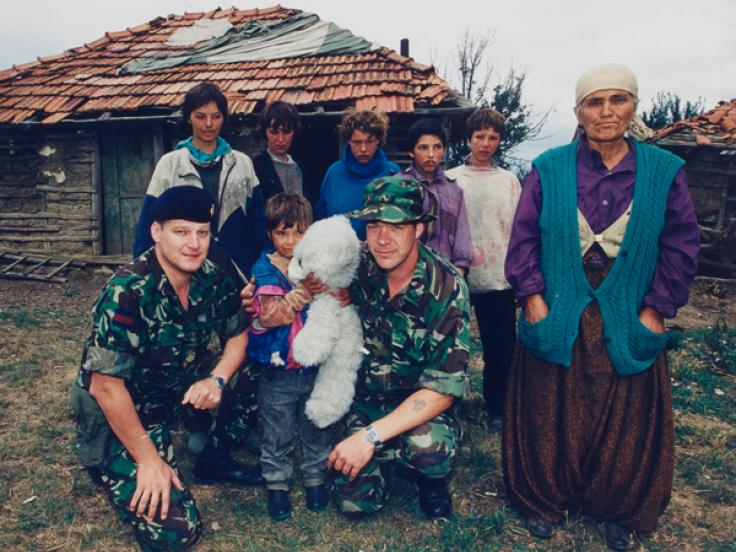 In 1999, British soldiers deployed to Kosovo as a peacekeeping force. Today, troops still serve in the disputed country as part of a multi-national force helping to ensure security and stability.