In the spring of 1945, Allied armies began their final advance into the heart of Nazi Germany. After weeks of intense fighting, they secured victory, ending the most destructive war in Europe's history. This hard-won result was greeted with celebration in Britain and across the Commonwealth. 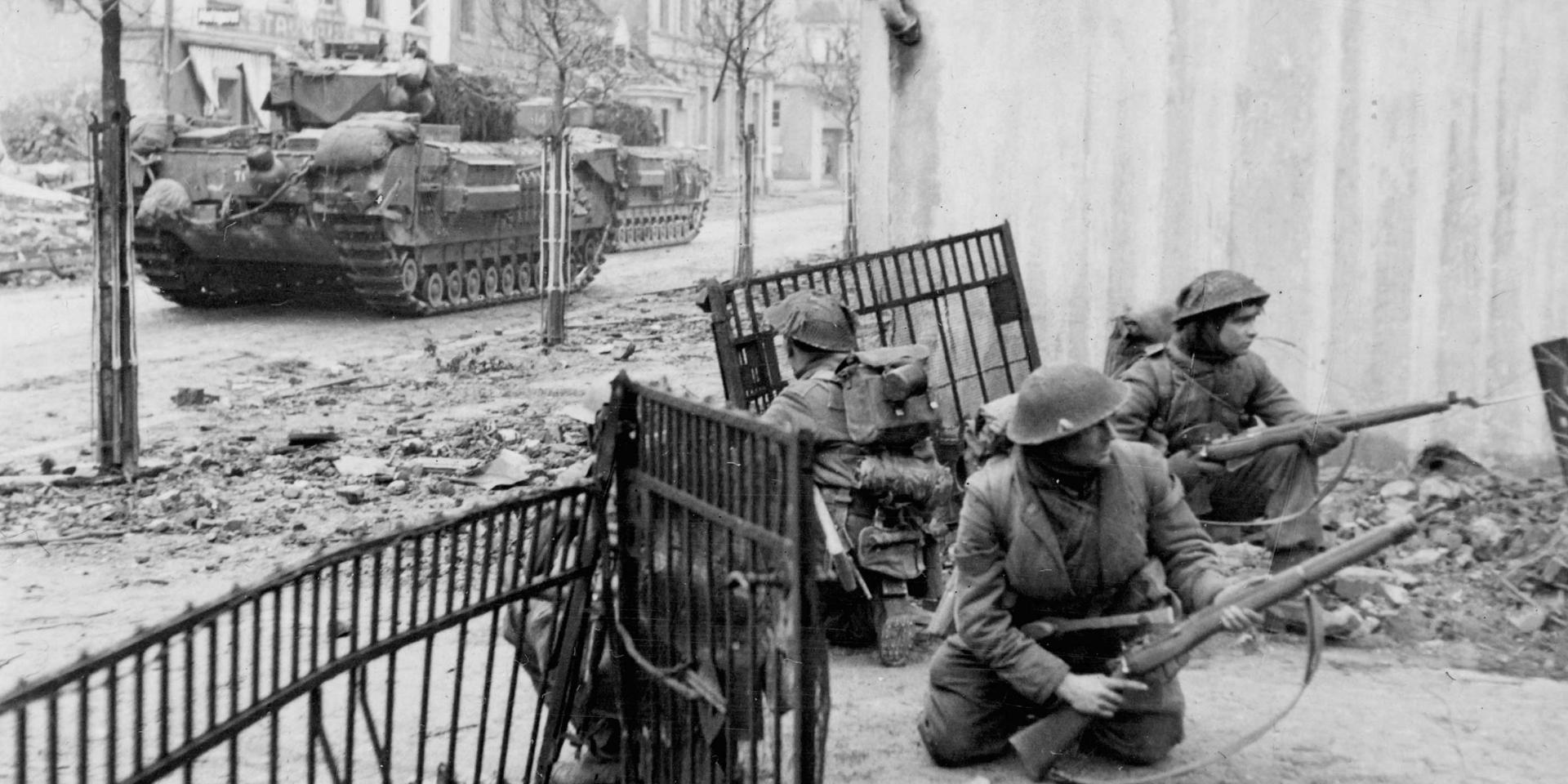 Throughout the winter and spring of 1944-45, the western Allies had advanced on a broad front into western Germany, while the Soviet Red Army simultaneously pushed into eastern Germany. Both armies faced a tenacious enemy determined to resist to the bitter end.

Following 21st Army Group’s victory in the Reichswald battles, and American success at Koblenz and Cologne, the western Allies had reached the River Rhine by March 1945. This was the last major obstacle on their drive into the heart of the German state.

The US 3rd Army advance into Koblenz, March 1945

A Challenger tank during the Reichswald battle, March 1945

On 7 March 1945, the US 1st Army captured the damaged railway bridge at Remagen. They quickly exploited the opportunity and expanded the bridgehead into a full-scale crossing. On 22 March, the US 3rd Army crossed the Rhine south of Mainz at Oppenheim.

On 23-24 March, elements of 21st Army Group crossed at Rees and Wesel in a brilliantly executed amphibious assault. This was undertaken after a huge air and artillery bombardment, and hidden by a smoke screen. Airborne troops were dropped by parachute and glider behind the German lines to secure a foothold and disrupt defences.

On 26 March, the US 6th Army Group also crossed in the area between Mannheim and Worms.

As the soldiers fought their way into Germany on land, the Allied air forces continued the strategic bombing of German industry, fuel, transport and housing infrastructure. This had begun piecemeal in 1940, but was expanded into systematic area bombing raids by hundreds of aircraft at a time.

Designed to break Germany's ability and will to resist, the raids devastated around half of the built-up area of its major cities and towns. Bombing killed around 400,000 civilians and left millions more homeless.

Following the Rhine crossings, Field Marshal Sir Bernard Montgomery, commander of 21st Army Group, hoped to lead his formation in a thrust towards Berlin. Instead, the US 9th Army, attached to his Army Group since the Ardennes crisis, was ordered to assist in the encirclement of the Ruhr. This operation took over 300,000 prisoners.

The other formations in 21st Army Group were also ordered elsewhere. The British 2nd Army advanced onto the North German Plain and the 1st Canadian Army wheeled left to liberate northern Holland.

The British 2nd Army then advanced towards Hamburg, crossing the River Elbe on 29 April 1945 and pushing on towards Denmark and the Baltic. During this advance, troops liberated the notorious Bergen-Belsen concentration camp. The 2nd Army eventually linked up with Soviet soldiers advancing from the east.

British commandos in the ruins of Osnabruck, April 1945

Tanks cross a crater during the advance to the Elbe, April 1945

Meanwhile, the Americans had raced the Red Army to Berlin. The Soviets made it there first, entering the German capital on 21 April 1945. The US 1st and 9th Armies then halted along the Rivers Elbe and Mulde, where they met the Soviets on 25 April. On 30 April, Germany's ruler Adolf Hitler killed himself in his Berlin bunker.

In the south, the US 6th Army Group advanced along the Swiss border, then through Bavaria, and into western Austria. On 5 May, they linked up with Allied forces coming up from Italy.

The headquarters of 21st Army Group had been established in the Villa Möllering in the village of Häcklingen near Lüneburg. It was here that a German delegation arrived with an offer of surrender on 3 May 1945. Initially, the Germans had wanted to negotiate a partial surrender of a small number of their forces, but their offer was rejected.

Montgomery demanded the total surrender of all forces opposing him in northern Germany, Holland and Denmark. When the Germans hesitated, Montgomery reportedly said, ‘If you do not agree to the... surrender, then I will go on with the war and I will be delighted to do so.’ The following day, 4 May, he received the capitulation of the German forces opposing him.

With Germany divided and in ruins, Hitler’s successor, Admiral Karl Döenitz, finally agreed to unconditional surrender at Rheims on 7 May. Tuesday 8 May 1945 was declared 'Victory in Europe' (VE) Day, and marked the formal end of the European war.

The German Instrument of Surrender was signed again the following day at Karlshorst in eastern Berlin, this time with representatives of the Soviet Union's military command present.

British troops parade in front of civilians in Hamburg, May 1945

Across the world, millions of people rejoiced in the news that Germany had surrendered. It meant an end to six years of war that had cost over 20 million European lives and brought huge suffering to so many people.

In Britain, the day was declared a public holiday. In towns and cities across the nation people marked the victory with street parties, dancing and singing. Similar scenes occurred all over the British Empire and Commonwealth. But as they celebrated, people also mourned their lost friends and loved ones.

In London, crowds massed in Trafalgar Square and up the Mall to Buckingham Palace, where King George VI and Queen Elizabeth, accompanied by Prime Minister Winston Churchill, appeared before the cheering crowds.

Message of thanks to 10th Indian Division for their contribution to Victory in Europe, 1945

'A brief period of rejoicing'

In his radio broadcast on VE Day, Churchill declared: ‘We may allow ourselves a brief period of rejoicing (as Japan) remains unsubdued’. Indeed, the war in the Far East looked like continuing for several years. It was only after the atomic bombing of Nagasaki and Hiroshima on 6 and 9 August 1945 that Japan surrendered.

In May 1945, no-one could foresee that the war with Japan would end so suddenly. Many soldiers, including those who had fought their way across North West Europe or up through Italy, allowed themselves only a short moment of celebration as they suspected that they would soon be transferred to the Far East.

On 21 July 1945, the British held a victory parade through Berlin to commemorate and celebrate the end of the European war. Many other parades had already been held across the British occupation zone in north-western Germany.

While an integral part of the Victory in Europe celebrations, these events also helped enforce a sense of defeat on the Germans and served to remind them that they were occupied.

Winston Churchill and Montgomery at the parade, 21 July 1945

Once the victory celebrations were over, the British and their wartime allies were faced with occupying and administering a country in ruins.

British soldiers would play a leading role in this, helping to hunt war criminals, rebuild industry and deal with displaced persons. At the same time, they would have to learn to live and work alongside their former German enemies.

‘Let us embark on what lies ahead full of joy and optimism. We have won the German war. Let us now win the peace.’ Field Marshal Bernard Law Montgomery, 8 May 1945 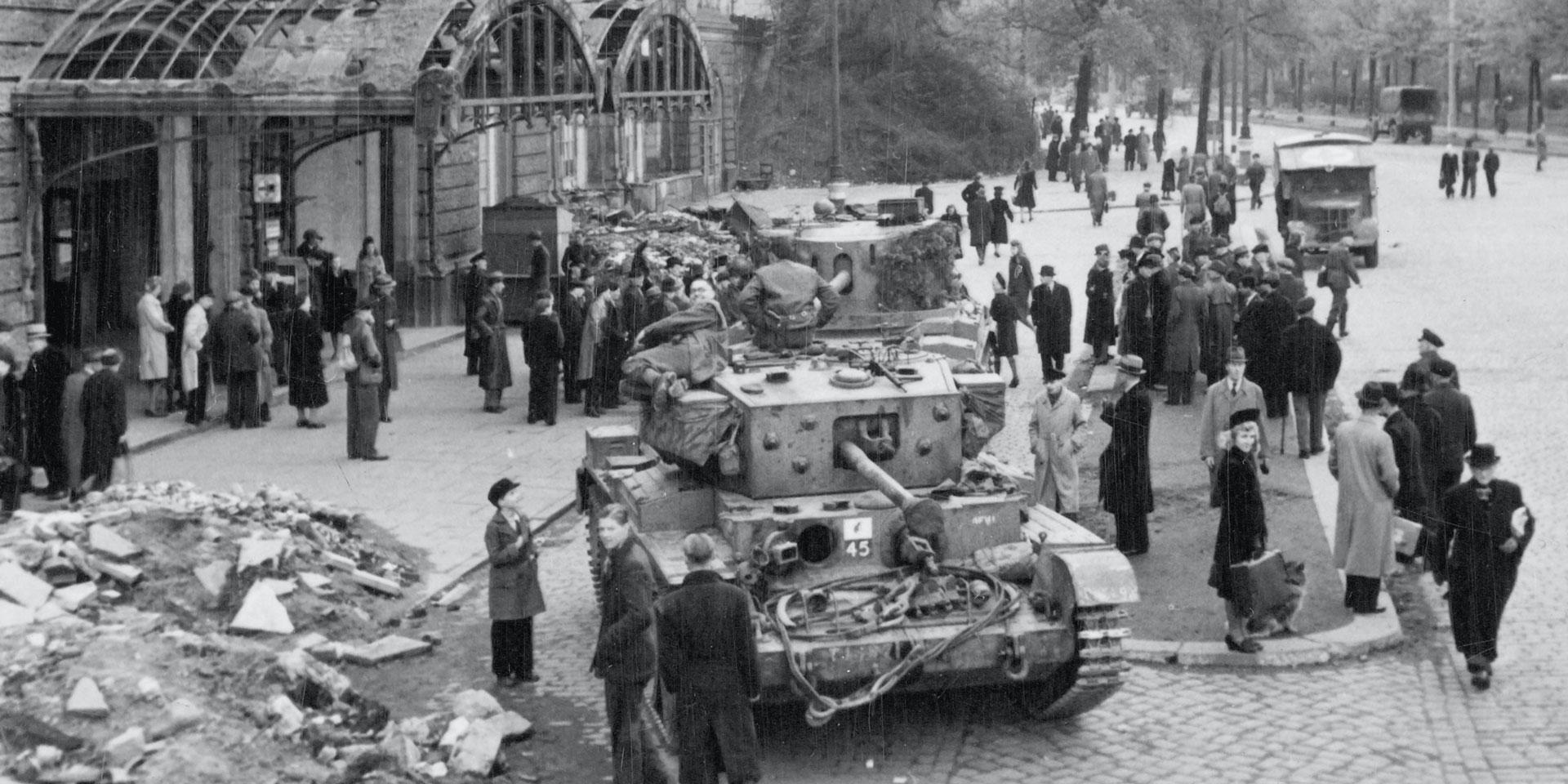 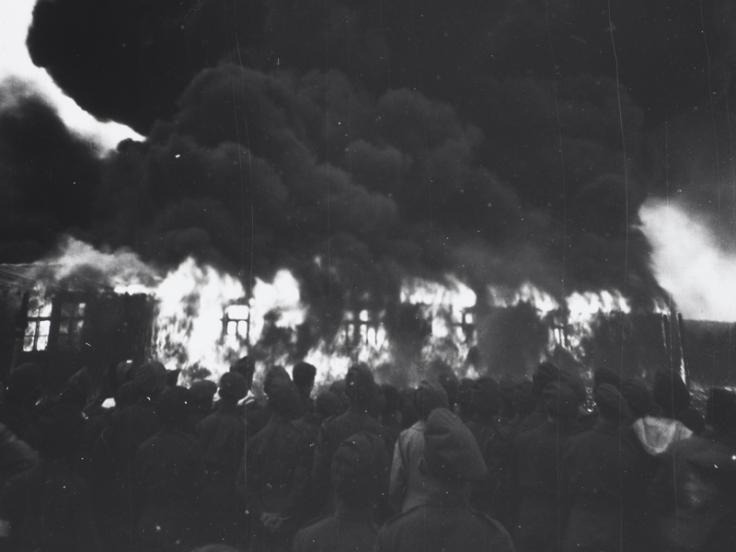