Between 1839 and 1842, British forces fought a war in China that benefitted drug smugglers. Their subsequent victory in the conflict opened up the lucrative Chinese trade to British merchants.

Shipping on the Canton River, 1840 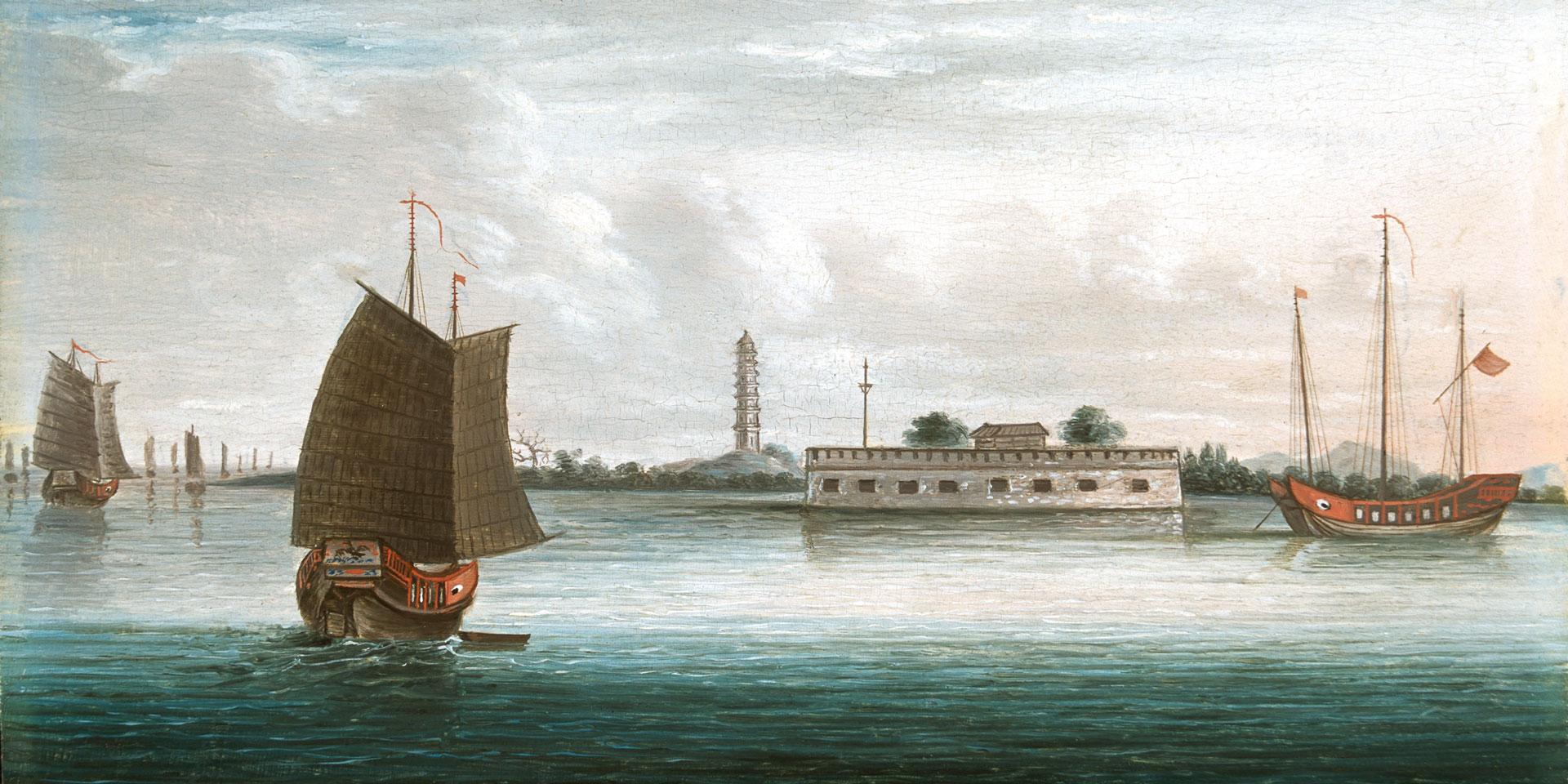 Shipping on the Canton River, 1840

The roots of the Opium War (or First China War) lay in a trade dispute between the British and the Chinese Qing Dynasty. By the start of the 19th century, the trade in Chinese goods such as tea, silks and porcelain was extremely lucrative for British merchants. The problem was that the Chinese would not buy British products in return. They would only sell their goods in exchange for silver, and as a result large amounts of silver were leaving Britain.

In order to stop this, the East India Company and other British merchants began to smuggle Indian opium into China illegally, for which they demanded payment in silver. This was then used to buy tea and other goods. By 1839, opium sales to China paid for the entire tea trade.

A fort on the Canton River, 1840. This was one of China's most important trade waterways and linked Canton with Hong Kong

The Chinese wanted to stop the trade. Although opium was valued as a medicine that could ease pain, assist sleep and reduce stress, by 1840 there were millions of addicts in the country. Illegal opium imports were also eroding what had once been a favourable balance of trade.

Chinese efforts to end the trade were initially successful. In May 1839 they forced the British Chief Superintendent of Trade in China, Charles Elliott, to hand over the stocks of opium at Canton for destruction. This outraged the British, and was the incident that sparked conflict.

Relations were already strained by the hostile attitude adopted by Chinese officials in negotiations with the British. The Chinese were suspicious and refused to enter into full diplomatic relations. This was because British officials had shocked the Chinese by refusing to kow-tow before the Emperor in accordance with protocol.

The British believed the Chinese had always been uncooperative, having allowed only one port, Canton, to be used by western merchants since the 18th century. There were many British politicians and merchants who viewed the dispute as an ideal opportunity to open up China.

Soldiers and sailors at the British Factory at Canton, 1840s

The taking of the island of Chusan, 1840 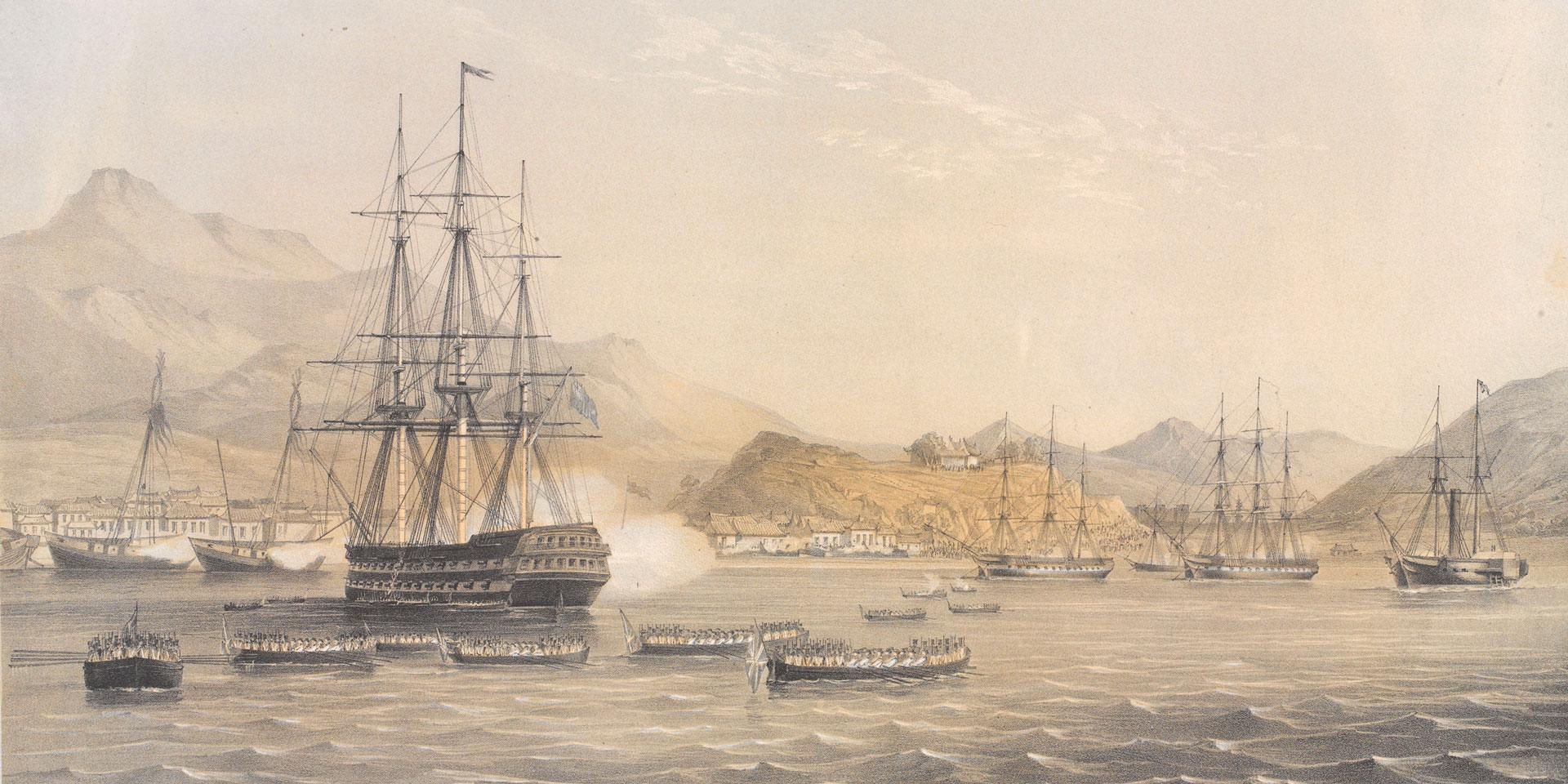 The taking of the island of Chusan, 1840

After several skirmishes, fighting began in November 1839. HMS ‘Volage’ and HMS ‘Hyacinth’ defeated 29 Chinese vessels during the evacuation of British refugees from Canton.

On 21 June the following year, a naval force commanded by Commodore Sir Gordon Bremer arrived off Macao. It then moved north to Chusan and on 5 July bombarded the port of Ting-hai, which was then occupied by troops under Brigadier-General George Burrell.

Negotiations began between the British and the Chinese Emperor. Lord Palmerston, the foreign secretary, demanded compensation and the granting of an island off the coast for use as a trading station.

The Chinese refused and on 7 January 1841 the British captured the Bogue forts of Chuenpi and Tycocktow that guarded the mouth of the Pearl River.

The force that captured the forts was commanded by Major J L Pratt of the 26th (Cameronian) Regiment and suffered only 38 casualties. Of the Chinese fleet of 13 war-junks, 10 were captured and their flagship was destroyed.

The Chinese Admiral, Kuan Ti, asked for a truce and faced with overwhelming British strength, signed an agreement on 18 January 1841 by which Hong Kong became a British territory.

The Chinese still refused to back down. The British therefore advanced up the Pearl River with a reinforced military contingent under Lieutenant-General Sir Hugh Gough, capturing Canton on 27 May 1841. They then withdrew on the understanding that the Chinese would pay reparations of £60,000.

Charles Elliott negotiated the settlement, but Lord Palmerston, who felt he had not extracted enough concessions, dismissed him. His replacement, Sir Henry Pottinger, wanted compensation for the opium confiscated and the costs of the war, the opening of further ports to international trade and the establishment of diplomatic relations.

Storming the fortress of Amoy, 1841

The British moved north again and captured Amoy on 26-27 August 1841 and re-possessed Chusan (previously returned to the Chinese) on 1 October. Chinhai was taken on 10 October at the cost of three British dead and 16 wounded.

Ningpo was captured unopposed on 13 October before operations were suspended for the winter. Negotiations again proved fruitless and on 10 March 1842 the Chinese counter-attacked, but were easily repelled.

The death of Colonel Tomlinson, 1842 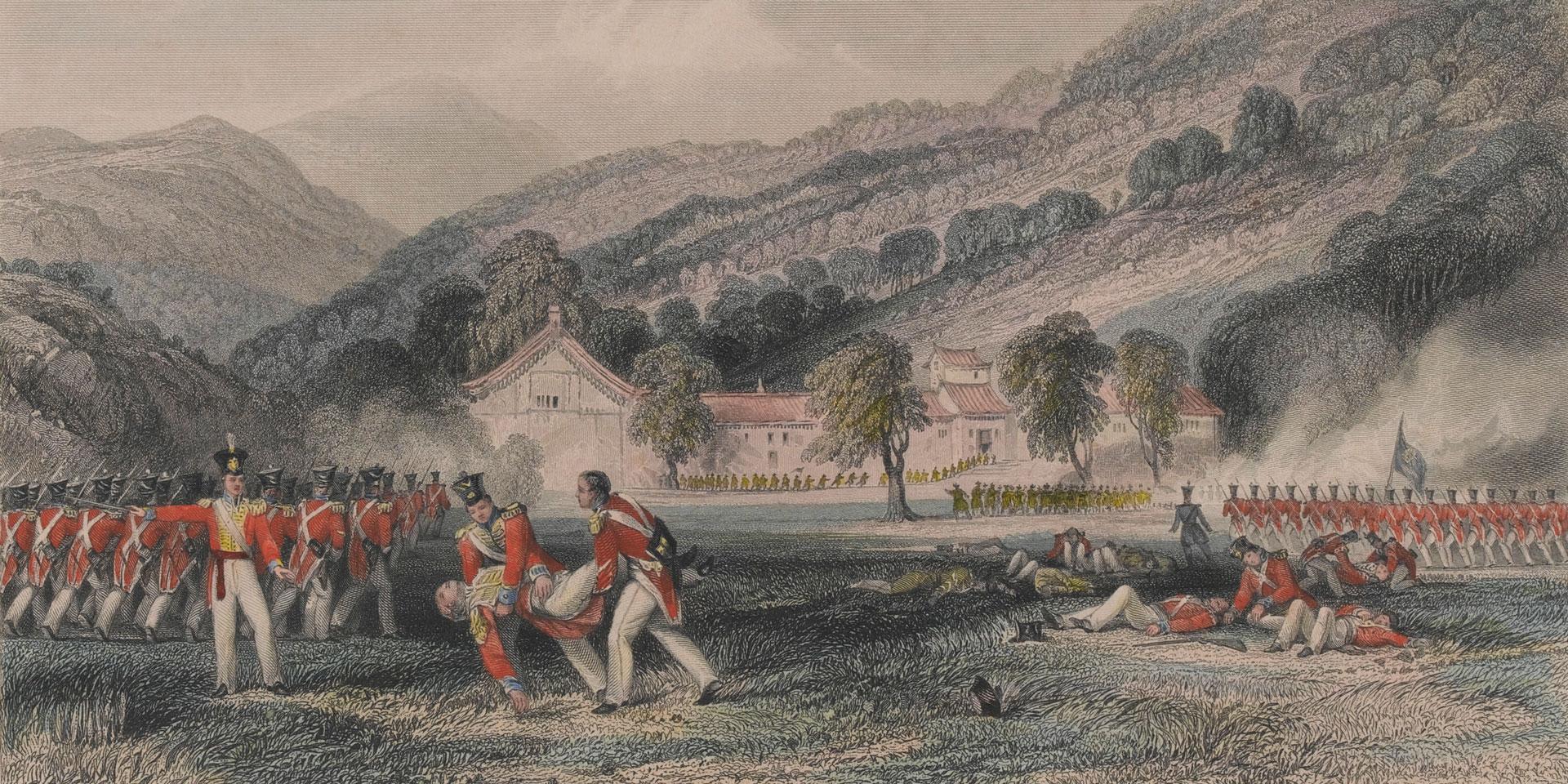 The death of Colonel Tomlinson, 1842

The British continued moving north, capturing Chapu on 18 May 1842, in an operation that witnessed brave Chinese resistance. Many Chinese only surrendered after their defences had been breached and their enclosures set on fire by rockets.

During the assault, nine British soldiers and sailors were killed and 55 wounded. One of the dead was Lieutenant-Colonel Nicholas Tomlinson, commander of the 18th (Royal Irish) Regiment.

Gough and the naval commander, Admiral Sir William Parker, then moved on to Shanghai, which was captured on 19 June 1842. Continuing up the Yangtze, Major-General Lord Saltoun’s 1st Brigade engaged the Chinese at Chinkiang on 21 July. The city was captured and its military commander, Hai-lin, was burned in his house which had been set alight on his own orders.

British casualties were again modest, totalling 34 dead and 107 wounded. Faced with the possibility of a British assault on Nanking, the Chinese now sued for peace.

Landing troops at the west gate of Chingkiang, 1842

The war ended on 17 August 1842, with the Treaty of Nanking enabling the British to 'carry on their mercantile transactions with whatever persons they please'. The treaty committed the Chinese to free trade, including the trade in opium.

Hong Kong was ceded to Britain, and the Treaty Ports of Guangzhou, Amoy, Foochow, Shanghai and Ningpo were opened to all traders. The Chinese also paid reparations.

The ease with which the British had defeated the Chinese armies seriously affected the Qing dynasty's prestige.

This contributed to the Taiping Rebellion (1850-64). For the victors, the Opium War paved the way for the opening up of the Chinese market.