Working as a war artist is not as straightforward as it seems. Painting on campaign presents artists with a number of issues, not least that they are non-combatants in some of the most dangerous environments in the world. 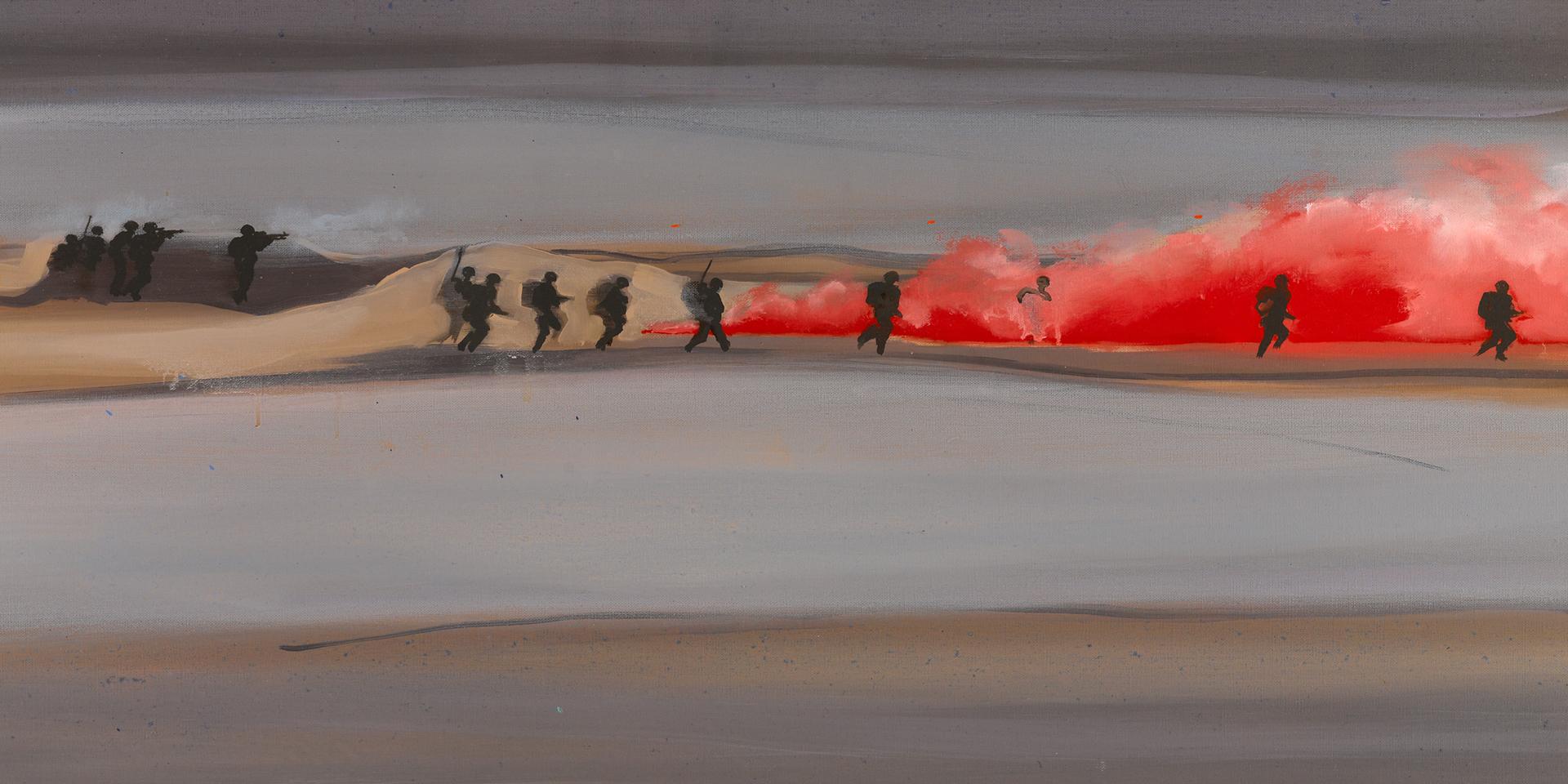 'An arsenal of coloured pens'

Jules George, a war artist working with the Ministry of Defence, travelled to Afghanistan in 2010 to draw troops on campaign. While with the army in Helmand Province he endured the same hostile conditions as the soldiers serving there, but also encountered an array of problems that a war zone presents to an artist.

Jules George sketching in Afghanistan in 2010

Weather, enemy fire and equipment were all challenges to be overcome. Even his assault vest '[raised] a few laughs wherever I went, especially when the magazine pouches were opened to reveal a veritable arsenal of coloured pens!'

The nature of the terrain also presented obstacles to his way of sketching.

‘It was the first time that I had literally drawn and walked at the same time, whilst also endeavouring to carefully follow the previous footsteps, only too aware of the possibility of stepping on an IED [improvised explosive device].’ Jules George on painting in Afghanistan

Sketching in the midst of the action could often be difficult. The situation could change very quickly meaning Jules rarely had the time to focus on something long enough to draw it.

Even holding on to his sketches was not always easy. Jules lost the contents of one sketchbook when a helicopter's rotor blades threw him off his feet, gashing his hands in the process. 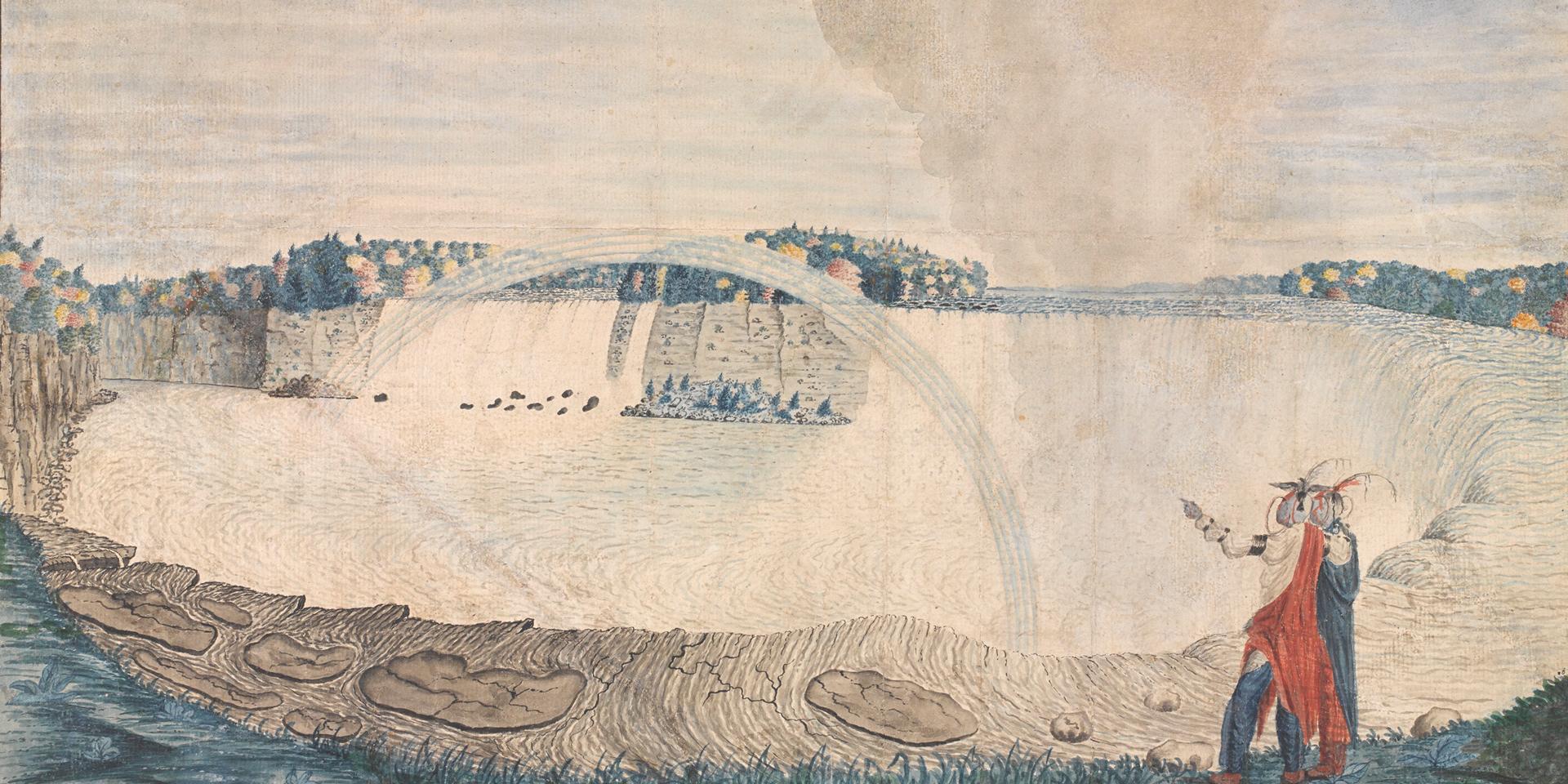 An East View of the Great Cataract of Niagara, 1762. Purchased with the generous assistance of the Art Fund and the Heritage Lottery Fund.

Done on the spot

Paintings of conflict zones supposedly drawn on the spot have often been finished later in the comfort of a studio. Artists frequently bring together a number of perspectives or detailed studies sketched on location in order to create one composition on a canvas. They use devices to heighten drama or create dynamism while retaining the immediacy of the scene they witnessed.

For example, Captain Davies' image 'An East View of the Great Cataract of Niagara' is inscribed ‘Done on the spot by Thomas Davies Capt Royal Artillery’ and claims to have been made in 1762. Although we know that Davies did sketch Niagara Falls from life, it's unlikely that his finished watercolour was completed in that humid environment.

Captain Davies completed his sketches as part of a territorial survey. As Britain’s North American empire grew in the late 18th century, British military engineers studied and drew the newly-captured lands to record their economic and military potential.

Notes on the method of drawing panoramas, by Archibald Crawford who taught mapping at the Staff College, 1905

In 1767 the British East India Company, which ruled much of India on behalf of the British Government, even created the Survey of India to help consolidate its territory. This survey led to the European discovery of Mount Everest, and is continued by the Indian civil services today.

By 1833 a new School of Military Survey had been established to train engineers in surveying, sketching and mapping.

An aid to military map-making

Surveying was not easy work, and in about 1880, the military sketching or surveying board was introduced as an aid to military map-making.

The board was devised by Colonel WH Richards, a topographical instructor at the Royal Military College Sandhurst. It was intended to be used while riding - a leather strap attaches it to the user’s wrist.

Sketching boards were fitted with a compass and a clinometer, to measure the angle of tilt. Brass rollers on the sides held the paper steady. As a sketch was completed, these could be twisted to reveal more fresh paper.

Major Willoughby Verner even patented a version in 1887 with a scale at the bottom so that when held in the hand, no other instruments were required.

Page from a sketchbook by William Barns Wollen, c1916 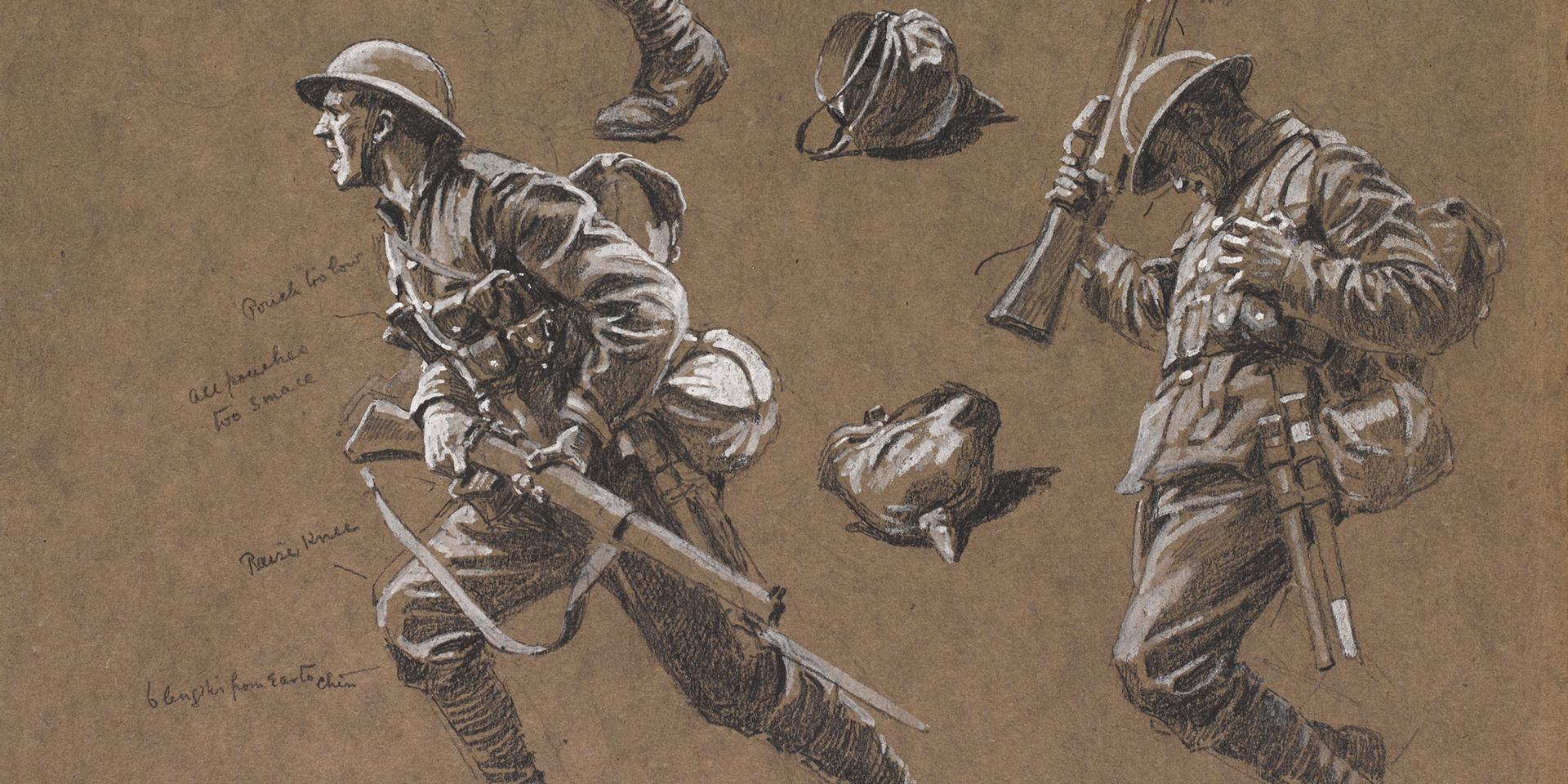 Page from a sketchbook by William Barns Wollen, c1916

Many of the artists who accompanied the army to war used a technique called grisaille, painting entirely in shades of grey.

By rendering the images in monochrome, they made it easier for engravers to transfer their pictures to printing blocks. Some artists, such as William Barns Wollen, were so familiar with using this technique for their images for the press that they even continued to use it for preliminary studies for oil paintings.

The London Territorials at Pozières, 1916, by William Barns Wollen 1917, which includes some of the figures from the preliminary sketch. 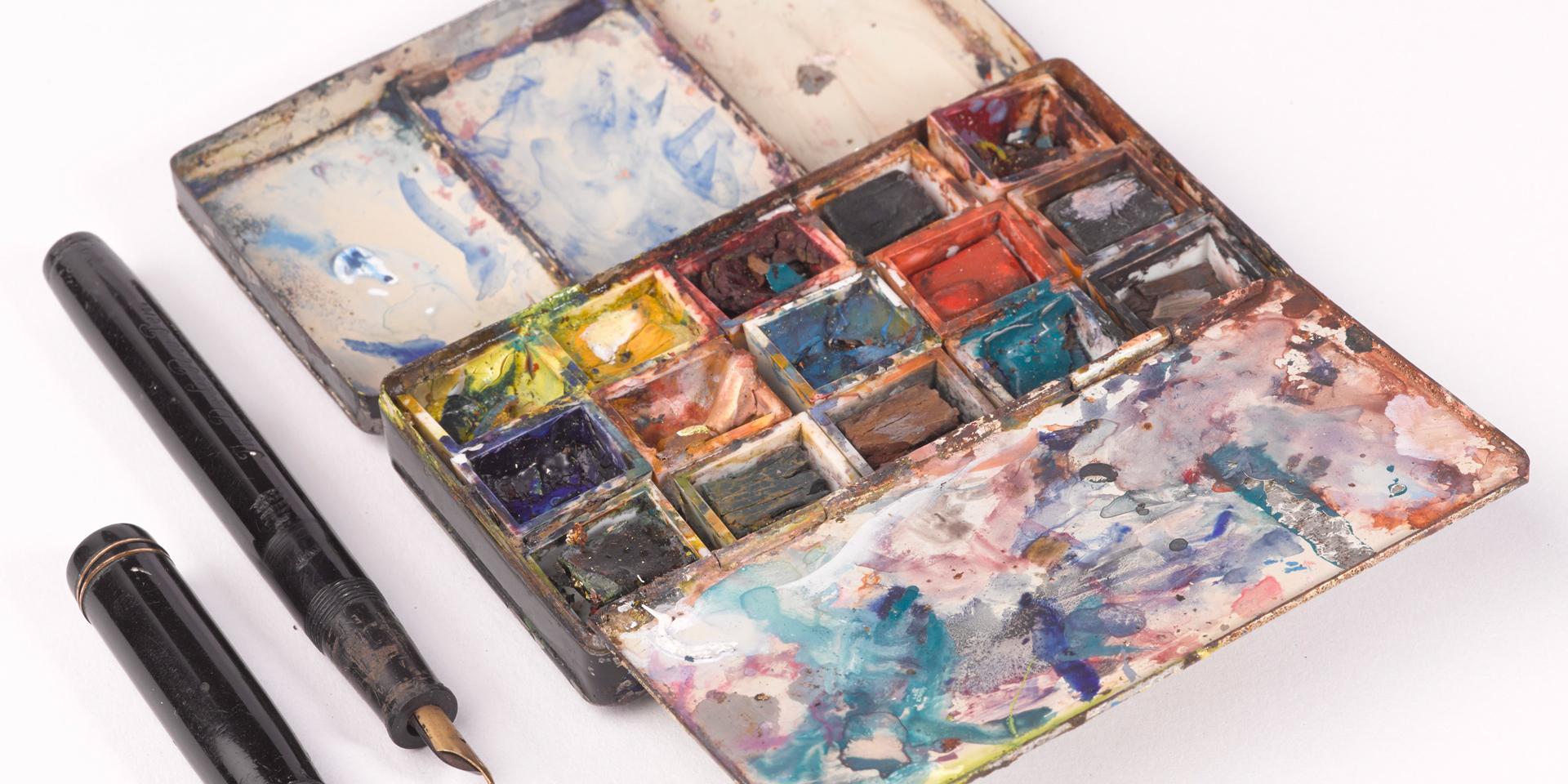 Other soldier-artists found ways to use colour in the midst of action. Small watercolour boxes were ideal for this use. The one above belonged to Sergeant Fred Darking when serving with the Royal Engineers during the Second World War (1939-45).

It measured just over 10cm x 5.5cm, and would have fitted easily into a pocket of his webbing equipment. Darking's watercolour pans have been well-used and the fold-out palette retains the evidence of colours he mixed.

Fred Darking was born in Nottingham in 1911. He trained as a draughtsman and worked as a commercial artist before the Second World War. In 1940 he enlisted and served in the Deception Unit of the Royal Engineers.

Darking worked with other painters, sculptors, architects, craftsmen and even magicians in the development of camouflage to make objects and soldiers ‘disappear’. Camouflage artists created designs of irregular, coloured shapes to blur the outline of objects and developed creative deception plans including inflatable tanks and dummy airfields and camps.

Although he was not an official war artist, the sketches that Darking produced in his spare time provide an important eyewitness record of the D-Day landings and subsequent campaigns through France, Belgium and Holland. He began to paint in order to help come to terms with his experiences of war. After the war, he set up an art school for demobilised soldiers.

Find out more about Fred Darking's experience on D-Day.

Portrait of a soldier. Sketch in ‘Blanco’ by Private Wilfrid Myers, 7 July 1945 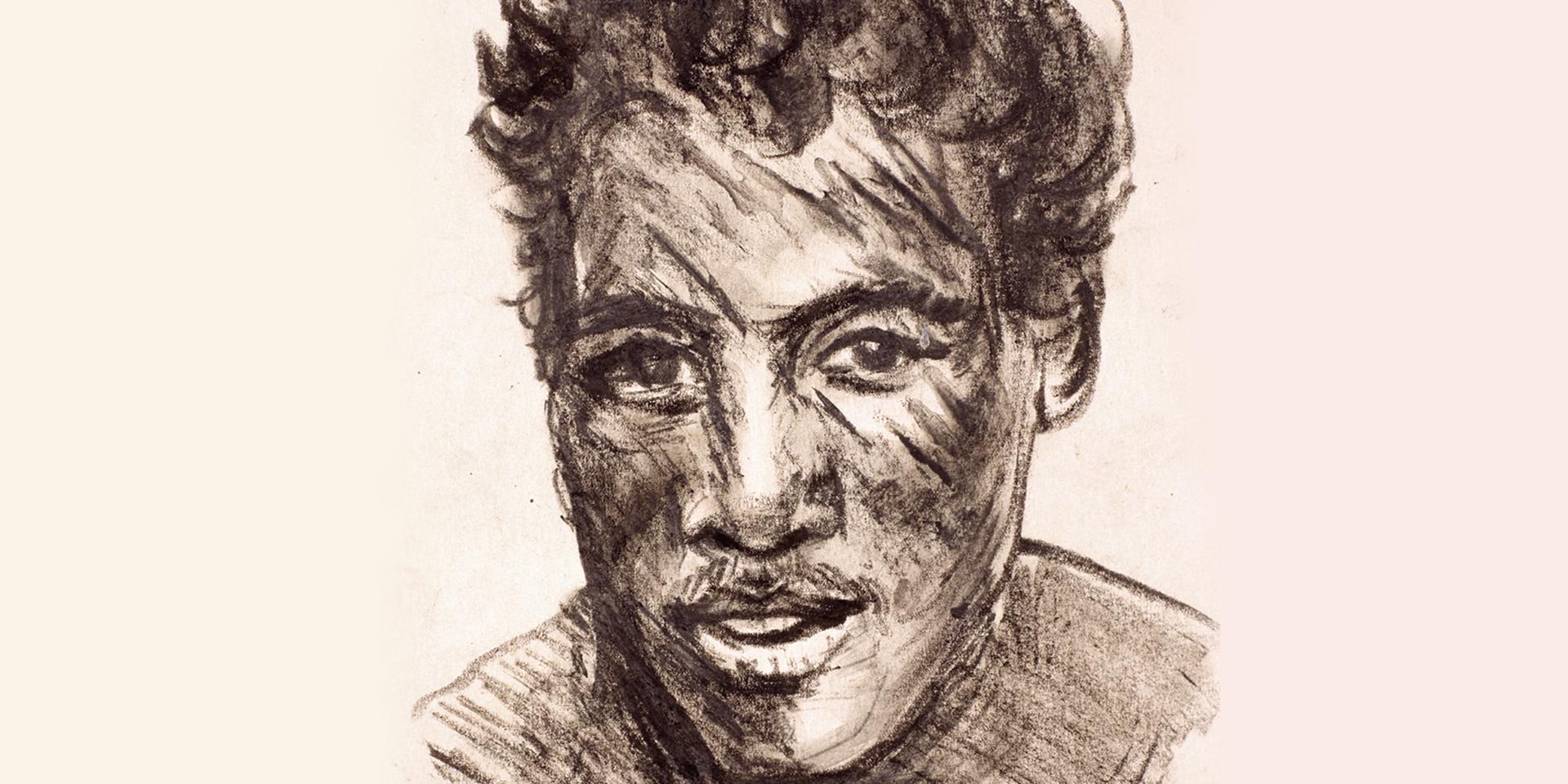 Portrait of a soldier. Sketch in ‘Blanco’ by Private Wilfrid Myers, 7 July 1945

Some soldier-artists, when short of drawing materials, have resorted to using whatever is to hand.

On active service with the Chindits in Burma, Private Wilfrid Myers drew his fellow soldiers in the hilly jungle terrain. He sketched using camouflage cream or, as in the portrait above, with ‘Blanco’ cleaning products as his drawing medium.

When sketchbooks are exhausted or not at hand, many soldiers have drawn on army issue forms or whatever paper is available. Similarly, some have painted on the lids of cigar boxes or discarded crates.

Douglas Farthing served in the Parachute Regiment for 23 years before retiring in 2008. Two years later he returned to serve in a Territorial Army unit of the Royal Anglian Regiment. Wherever he was deployed, he carried a sketchbook in his kitbag to record a soldier’s perspective of the reality of war. Using the materials close to hand, he painted on the lids of crates and ammunition boxes.

'I’m not sure whether it was an artistic response or a financial response, but it was quite a nice thing I was making things from what we used as soldiers.' Douglas Farthing on using unconventional drawing materials 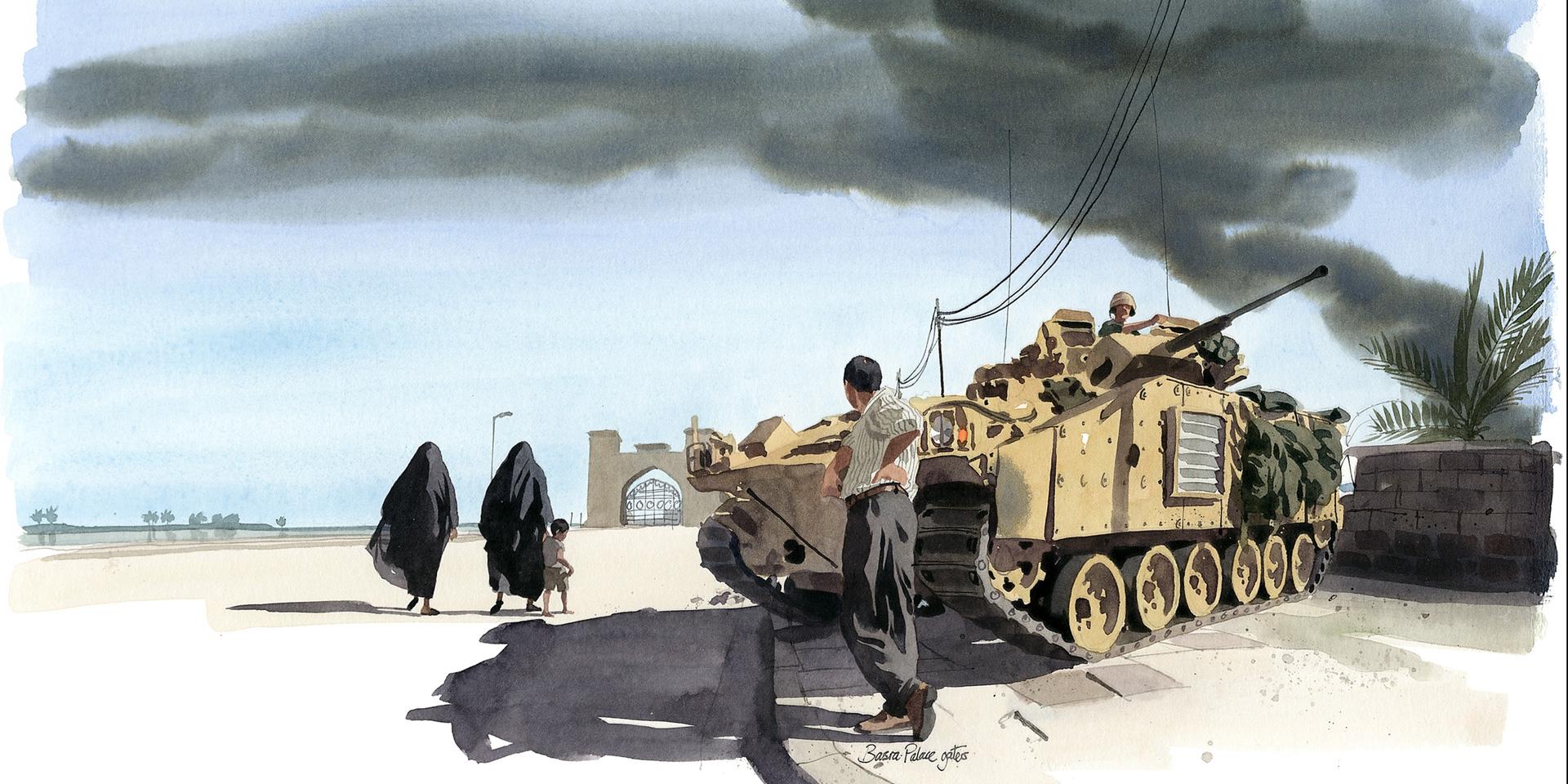 In March 2003, Matthew Cook was appointed war artist for The Times and given a week to get ready for the impending war with Iraq. Already serving as a Territorial Army soldier, he also attended a short hostile environment training course before flying to Kuwait.

Matthew used a minimal kit while painting in Iraq in 2003 and again in Afghanistan in 2009. His tools included pens, pencils, brushes, a sketchbook and three pots of acrylic ink in primary colours, from which he mixed all the shades he needed to capture the scenes around him.

Unusually, Matthew used plastic airline food trays as palettes to mix his inks. Ever conscious of the need to carry as little equipment as possible, he even urinated in the water bottle used with this painting kit in order to save water!