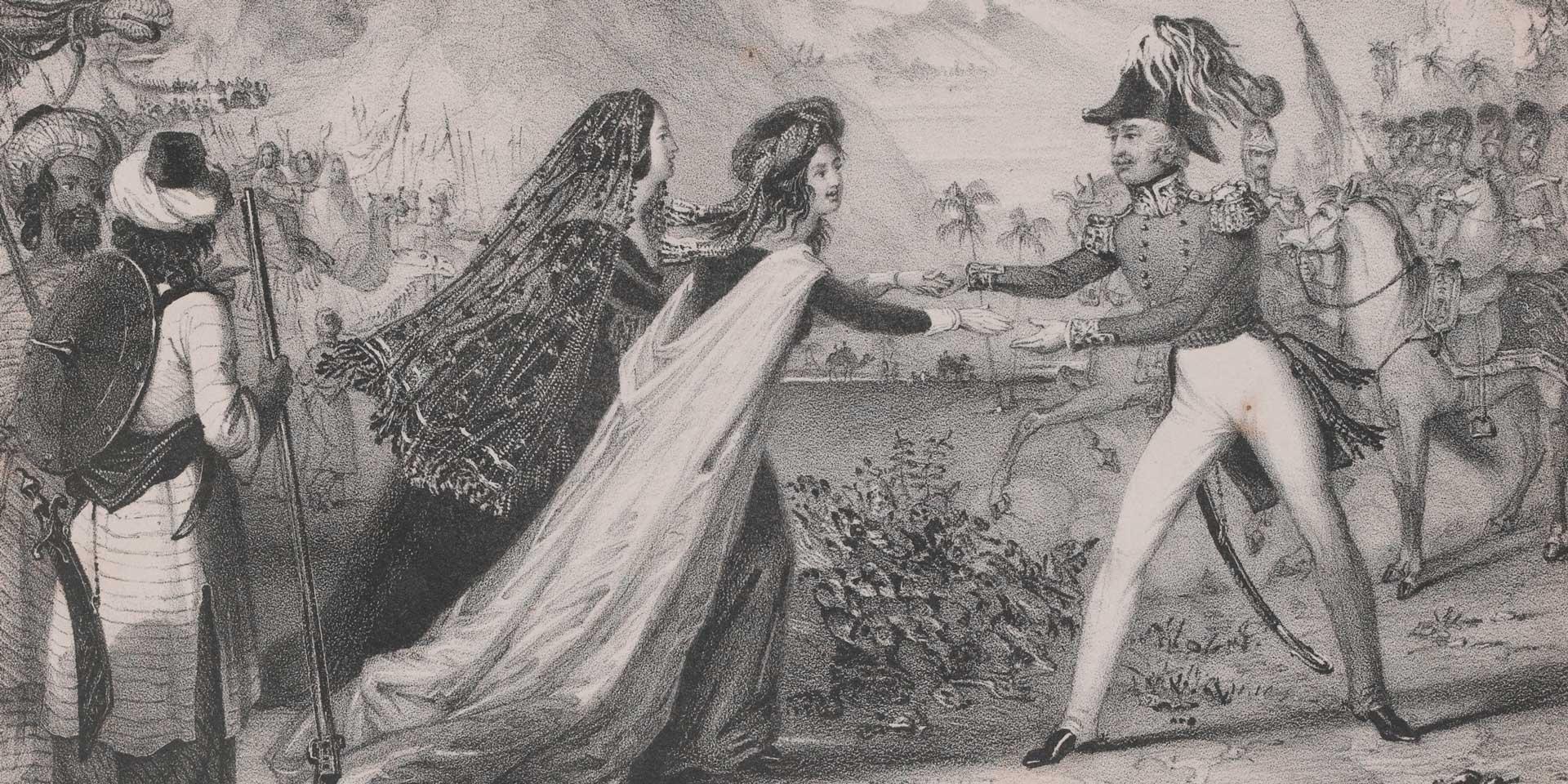 Robert Henry Sale (1782-1845) was commissioned into the 36th (Herefordshire) Regiment of Foot in 1795. His initial service was with the 12th (East Suffolk) Foot in India where he took part in the Battle of Mallavelly and the capture of Seringapatam during the Fourth Mysore War (1799).

Promoted captain in 1806, two years later Sale was engaged in the Malabar against Velu Thampi, the rebellious Dalawa of Travancore.

The taking of Seringapatam, 1799

In 1810, he accompanied the expedition to Mauritius. Then, in 1813, he was raised to the rank of major before transferring to the 13th (Somersetshire Light Infantry) Regiment.

During the First Burma War (1824-26), Sale led the 13th Regiment in all the actions up to the capture of Rangoon. He was promoted to lieutenant-colonel, wounded at the Battle of Malun (1826) and ended the campaign commanding a brigade. For these services, he was appointed a Commander of the Order of the Bath (CB).

At the start of the First Afghan War (1839-42), Brevet-Colonel Sale commanded the 1st Bengal Brigade during the advance on Kandahar. He then took part in the march to Kabul and led one of the storming columns at the formidable fortress of Ghazni in July 1839.

For his services, Sale was made a Knight Commander of the Order of the Bath (KCB) and received the local rank of major-general.

In late 1841, Sale’s brigade was sent back to India. But it encountered such hostility from the Ghilzai tribesmen of the Khoord-Kabul Pass - whose subsidies had been cut - that it had to seek refuge at Jalalabad fort on 12 November 1841.

Despite being ordered to return to Kabul following the murder of the British envoy, Sale decided to ignore these instructions. Resisting his personal desire to return to protect his wife and daughter who were in the Afghan capital, he at once set about preparing the half-ruined fortress for a siege.

The ramparts were widened and the parapets raised. In addition, cover outside the walls was removed by demolishing buildings and filling ditches.

Akbar Khan’s shabraque, taken during the attack on 7 April 1842

The garrison at Jalalabad subsequently withstood a siege from mid-November 1841 until April 1842. The besieging Afghans eventually retired, partly as a result of Sale’s own sorties - including a brilliantly planned and successful attack on Akbar Khan’s lines on 7 April - and partly upon the approach of Major-General George Pollock’s Army of Retribution.

Sale was promoted to Knight Grand Cross (GCB) and salutes were fired at every military cantonment in India to mark his heroic leadership during the siege.

He then accompanied Pollock to Kabul, where he rescued Lady Sale and their daughter in person, after advancing into hostile territory at the head of a cavalry detachment. Sale later received the thanks of parliament for his services.

Lady Florentia Sale during the retreat from Kabul, 1842

‘His operations were distinguished by the most indomitable spirit of valour, endurance, and devotedness to his country's honour.’ Prime Minister Sir Robert Peel proposing a vote of thanks in Parliament, 1842

Leading from the front

Despite his reputation as a ferocious disciplinarian, Sale was very popular with his men. He invariably led from the front, often engaging in single combat with the enemy. This earned him the nickname ‘Fighting Bob’.