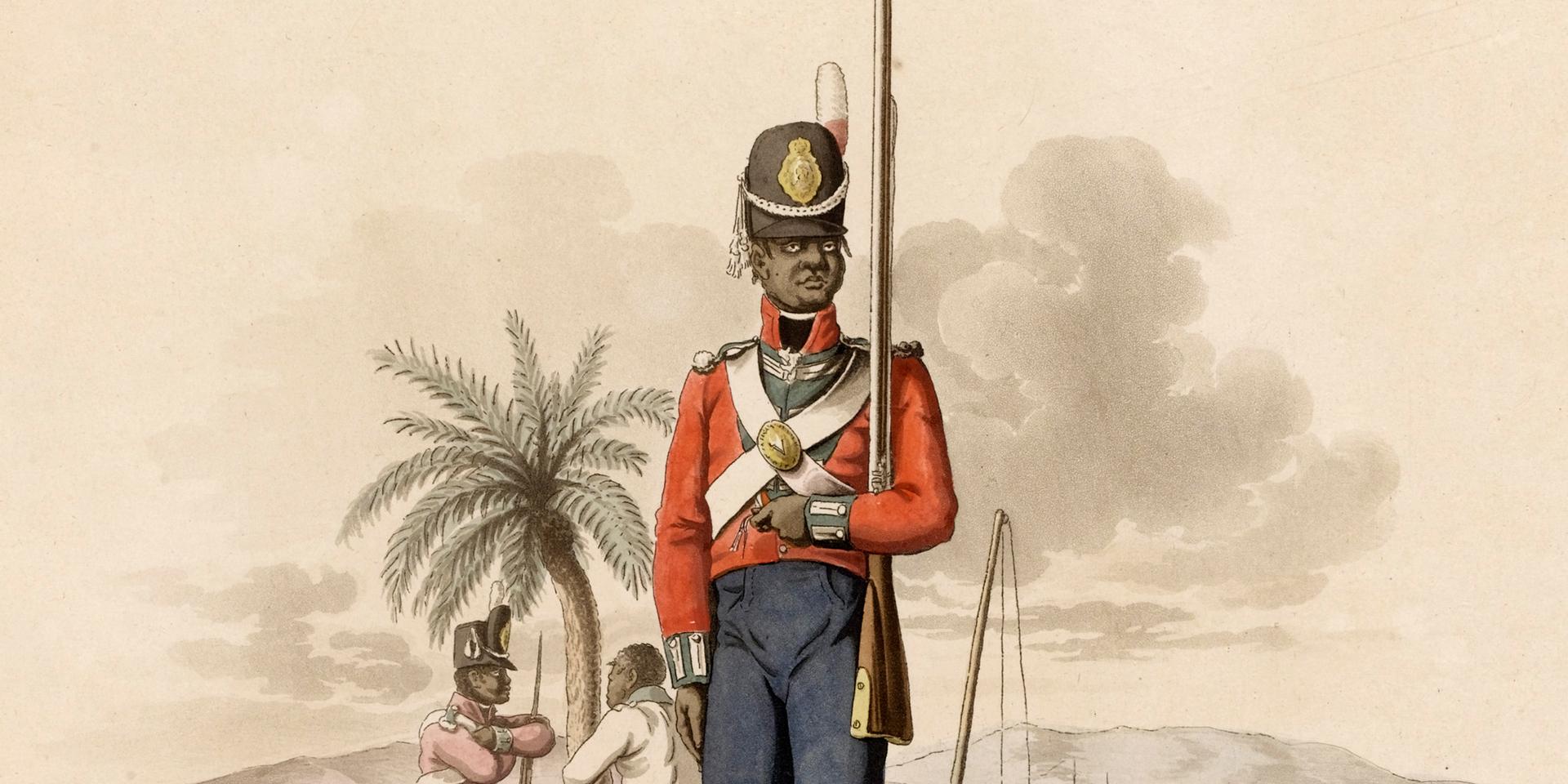 In the 18th century, as the British Empire grew, more soldiers were needed to garrison the new territories coming under British control. The need for men was also increased by the wars against Revolutionary and Napoleonic France (1793-1815), which soon spread to the Caribbean colonies of the European powers.

New units were raised in Britain's colonies to meet these demands. They included the West India Regiments, eight of which were embodied between 24 April and 1 September 1795.

The story of these regiments is significant for two main reasons. Firstly, unlike most other colonial forces, they were formally part of the British Army. But secondly, the way their soldiers were recruited in the early years was unlike any other regiment.

A private of the 8th West India Regiment, c1803

The harsh environment of the Caribbean took a heavy toll on European units, with disease resulting in many deaths. The War Office decided to raise regiments of black soldiers, who were believed to be more tolerant of the climate and better suited to tropical service.

Many of the first recruits were escaped American slaves who had fought for the British during the American War of Independence (1775-83). Men were also recruited locally in the Caribbean, but not in sufficient numbers to defend the British territories from the enemy.

The ranks of the new regiments were filled with Creole and African slaves, purchased from West Indian sugar plantations or from newly arrived slave ships. Between 1795 and 1807, estimates suggest 13,400 slaves were purchased for the West India Regiments.

An account in the papers of the Commander-in-Chief of Jamaica details the cost of buying and clothing 272 African slaves for service in the West India Regiments. The price listed on this account was over £32,600 - more than £2 million in today's money.

Account detailing the cost of buying and clothing 272 African slaves, 1801

Prior to the abolition of the slave trade within the British Empire in 1807, there was much debate about the legal status of the West India Regiments' soldiers, and whether they were subject to slave laws or not. But on discharge from the regiments the men were free and in some cases awarded pensions and other support.

In 1807, all serving black soldiers who had been recruited as slaves were freed under the Mutiny Act of that year. The act established that the black soldiers were freemen and should be treated like any other soldiers.

In the years after abolition, West India Regiment recruits included men liberated by the Royal Navy from illegal slave ships, as well as black soldiers captured from enemy French and Dutch colonies.

Former slave soldiers were also increasingly given the same enlistment bounty, pay and allowances as white soldiers. Significantly, they were recognised as a formal part of the British Army, unlike their counterparts in India and other British colonies.

Centre of the Regimental Colour of the 4th West India Regiment, c1800 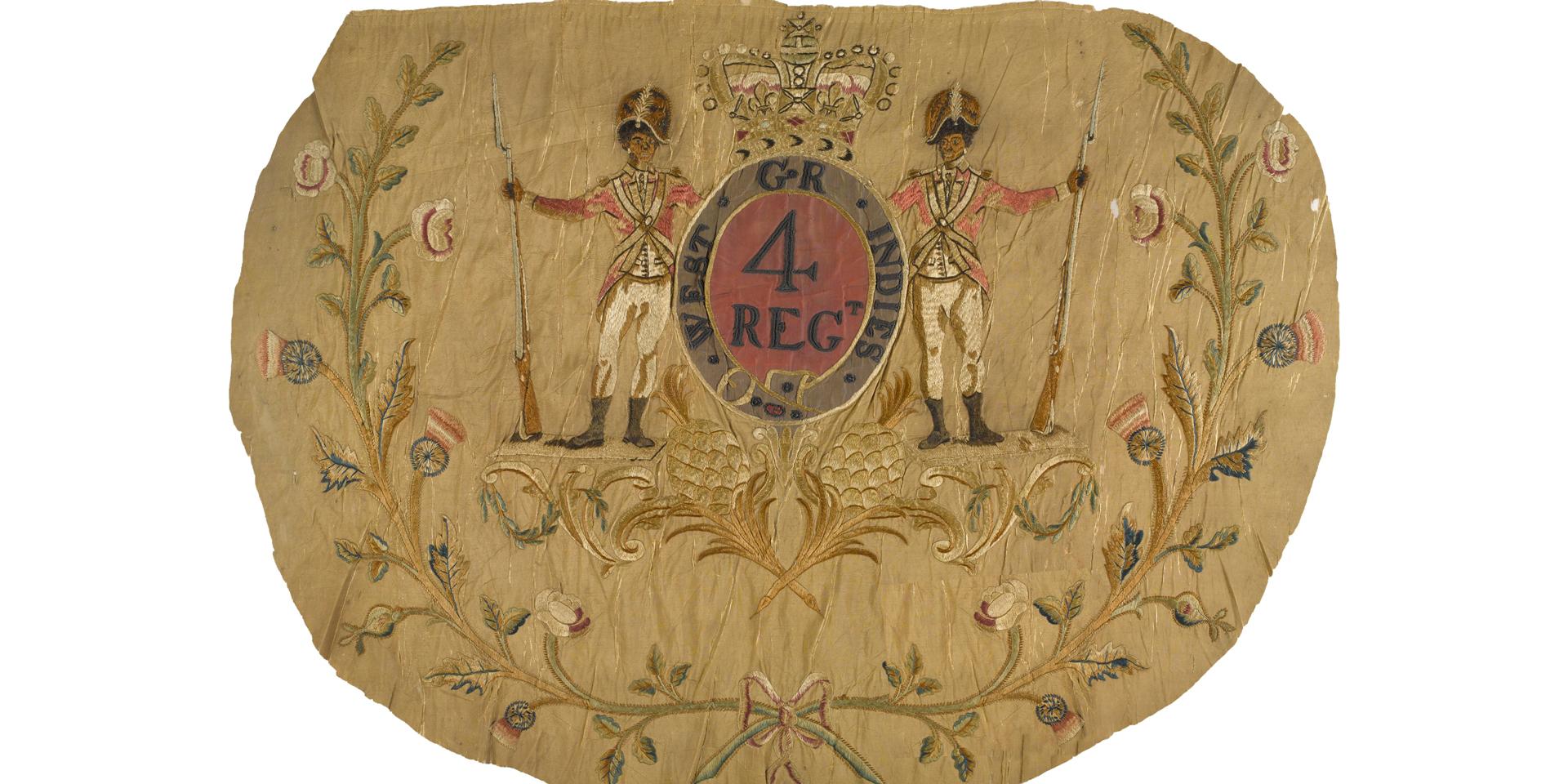 Centre of the Regimental Colour of the 4th West India Regiment, c1800

Initially, the West India Regiments were used to protect the plantation economies of Britain's Caribbean colonies. But they also took part in the wars against France, helping to seize enemy colonies and expand the Empire.

West India Regiments fought at St Lucia in 1803, the Danish Virgin Islands (now US Virgin Islands) in 1807, Martinique and Les Saintes in 1809, and Guadeloupe in 1810.

They also served in America during the the War of 1812 (1812-15), joining the attack on New Orleans. But, after this, their numbers were steadily reduced and most regiments were disbanded.

For the majority of the 19th century, the remaining regiments were based in Trinidad and Jamaica. But, after taking part in the Second Ashanti War (1873-74) in West Africa, they established a base in Sierra Leone for the recruitment and training of African volunteers.

In 1888, the two remaining West India Regiments were merged into a single regiment comprising two battalions. These were then rotated; one was based in the Caribbean, and one was based in Sierra Leone.

Black recruits were generally perceived as good soldiers. But for many white British officers, serving with the West India Regiments was unpopular. While fear of tropical diseases played a large part in this, the attitudes of the time made service with black troops disagreeable to some.

‘When I was last in the West Indies, the 8th West India regiment, composed entirely of native Africans rescued in the middle passage, exhibited as fine a military corps... as ever was seen of any colour... As marksmen they were superior to the ordinary run of white soldiers; and when Fort Bourbon, Martinique... came to be stormed, they went to the breach with European courage.’
Surgeon William Fergusson on the 8th West India Regiment, 1846

The 3rd West India Regiment fire on French troops at a bridge on the Ile de Cabret, April 1809 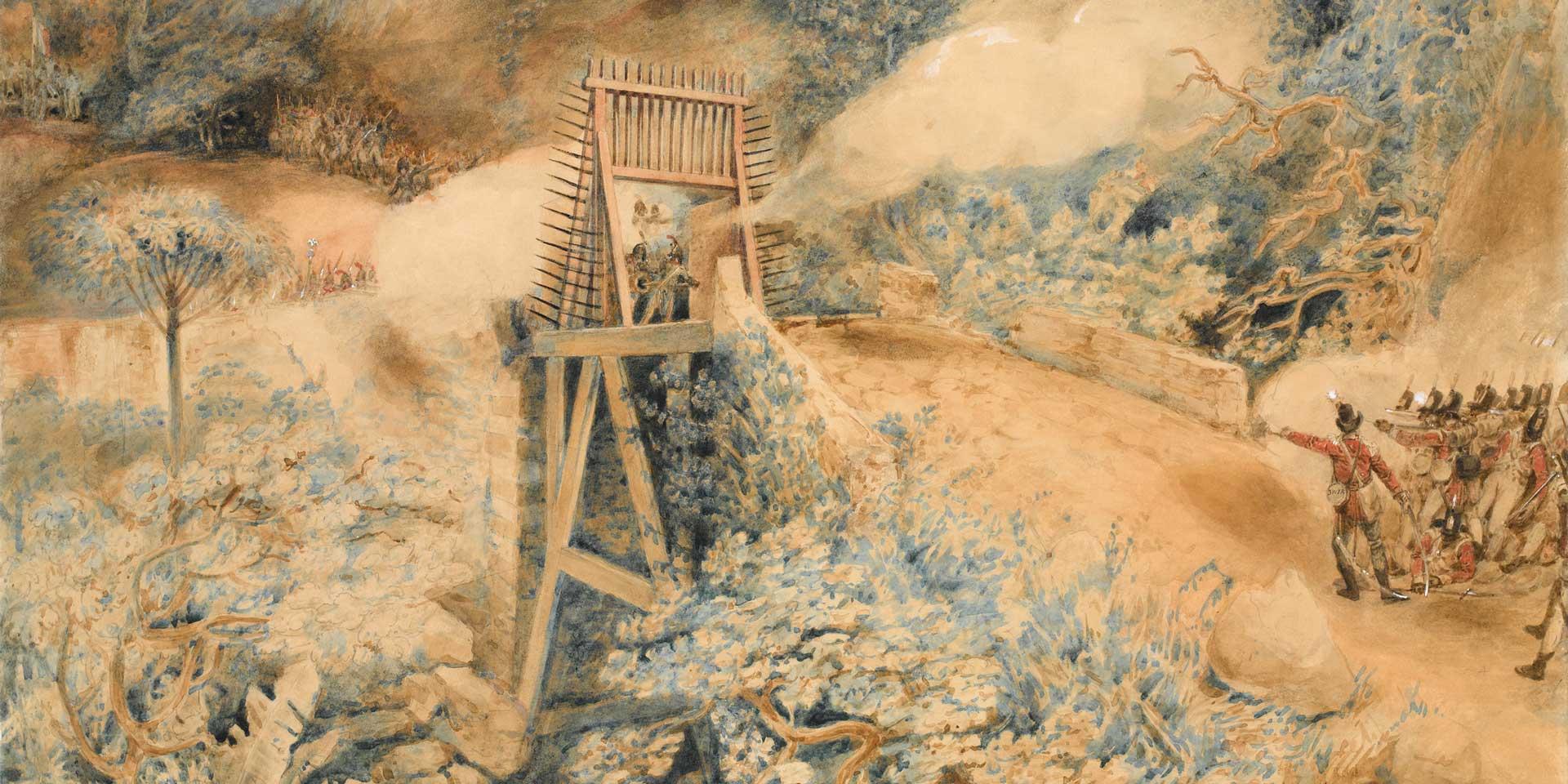 The 3rd West India Regiment fire on French troops at a bridge on the Ile de Cabret, April 1809

Until 1858, soldiers of the West India Regiments wore uniforms similar to the rest of the British Army. But Queen Victoria, impressed by the exotic appearance of the French North African Zouave infantry, instructed them to adopt the elaborate Zouave uniform.

This uniform was only worn by black soldiers, who were not permitted to rise beyond non-commissioned rank. The white officers never formally adopted the Zouave uniform, although many wore parts of it on active service. It remained a part of the West India Regiment Dress Uniform until 1914, and was worn by the regimental band until disbandment.

An officer and soldier of the 1st West India Regiment, 1876 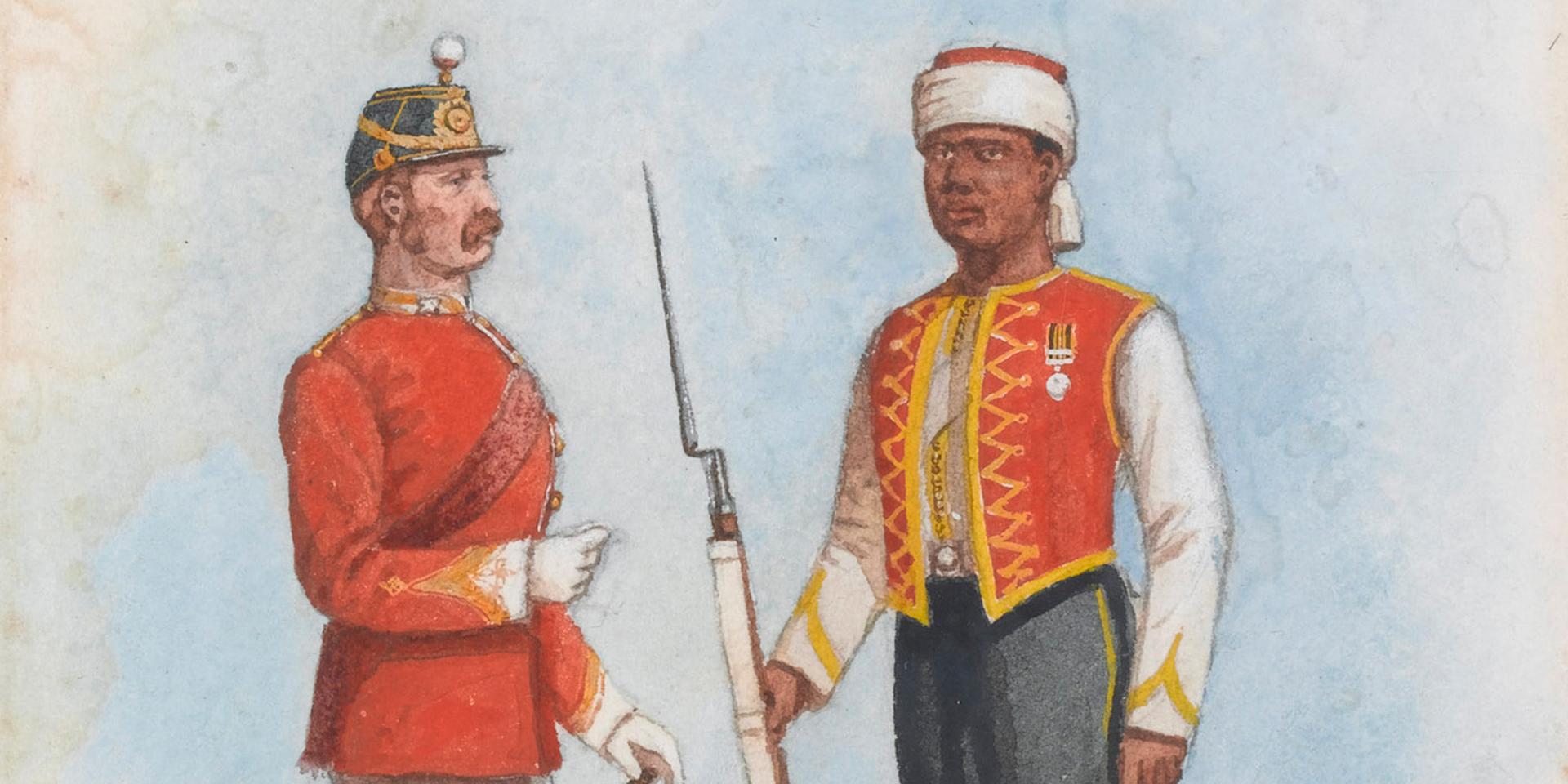 An officer and soldier of the 1st West India Regiment, 1876

The West India Regiment was mobilised on the outbreak of war in 1914. The 1st Battalion, based in Sierra Leone at the start of the conflict, saw service in the German Cameroon. The 2nd Battalion replaced them there in late 1915, and would participate in the capture of the capital, Yaoundé, in January 1916.

Later that year, the 2nd Battalion transferred to the campaign in East Africa. In 1918, it went north to Suez, and eventually completed its wartime service at Lydda in Palestine.

After the war, in 1920, the 1st and 2nd Battalions were amalgamated. But with the Caribbean peaceful, and local forces in West Africa expanding to fill the roles previously undertaken by its soldiers, the West India Regiment was disbanded in 1927. This brought to an end more than a century of service to the Crown.

Briefly revived in 1958 during the short-lived Federation of the West Indies, the regiment was brought to a final end in 1962. However the modern Jamaican Defence Force still retains some of the traditions and dress of the West India Regiment. In addition, the British Army continues to recruit in the West Indies today. 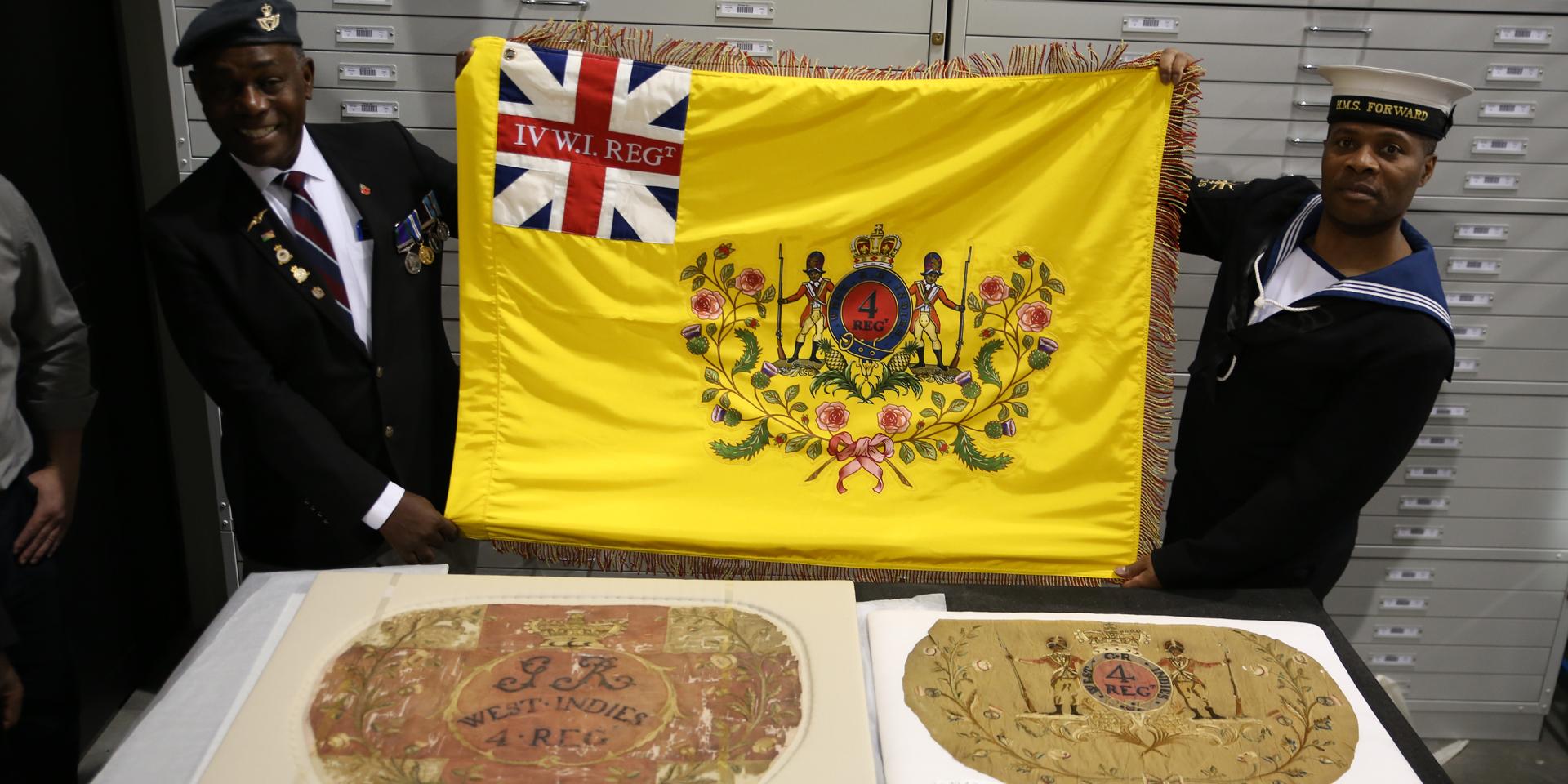 The National Army Museum has worked closely with British Caribbean communities to re-examine the contributions of West Indian soldiers to British military history.

At one of our community workshops, we showed a 200-year-old regimental colour of the 4th West India Regiment. The colour is one of the first ever official representations of black soldiers in the British Army.

Exploring archives relating to the history of West Indian soldiers

Examining objects relating to the history of West Indian soldiers

A 'colour' is a flag in which the spirit and honour of a regiment is symbolised. Workshop participants found this object very powerful. The symbolism shown in it was felt to connect closely to the sense of 'Britishness' felt by many West Indians today.

They had even created a modern replica, allowing us to compare the original colour with how it might have looked like when carried into battle 200 years ago. 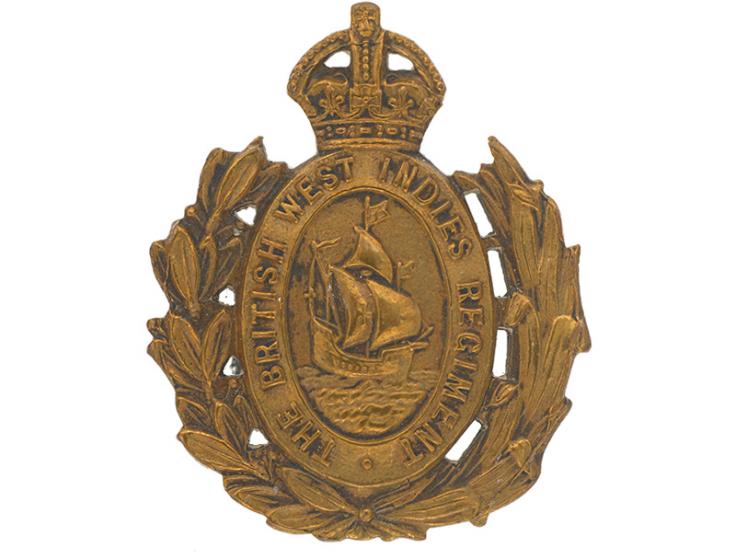 Formed in 1915, this British Army regiment was composed of volunteers from the West Indies and served in various theatres of the First World War. It was disbanded in 1921, shortly after the end of the conflict.

This infantry unit was formed in 1689 and primarily recruited in North Wales. Throughout its long history, it served in many British Army campaigns. In 2006, it was merged into The Royal Welsh.