Tipu Sultan, the ruler of the southern Indian kingdom of Mysore, was a renowned war leader. Embracing western military methods like artillery and rockets alongside traditional Indian weapons including war elephants, he ensured his forces could overwhelm his Indian rivals and match the British armies sent against him.

The British, and in particular the East India Company, which ruled huge tracts of the subcontinent, recognised that his powerful army was one of the greatest threats to their expansion in India. Indeed, it fought three wars against Tipu and his father, Hyder Ali, between 1767 and 1792.

The threat from Mysore was finally removed on 4 May 1799, when the British - supported by the army of their Indian ally, the Nizam of Hyderabad - stormed and captured Tipu's capital, Seringapatam, after a month-long siege.

Tipu was killed in the fighting, and with his death the Fourth Mysore War (1799) ended. The state of Mysore was subsequently partitioned by the Company and its allies.

‘the most active powerful, ambitious Prince of Hindostan, whose troops are in high order and whose powerful antipathy to the English is beyond what the Directors are yet well aware of.’

A Campbell, writing to the Court of Directors of the East India Company, 1788

The storming of Seringapatam, 1799

'That the war Turban of Tippoo Sultan, with a sword worn by him, and the sword of Moriah Row, be presented to Marquis Cornwallis through the Commander-in-Chief as a mark of their respect.’ 'Proceedings of the Committee of Prize', 17 May 1799

Less than a fortnight after the fall of Seringapatam, the Committee of Prize - appointed by the victorious Anglo-Indian army - presented several items from Tipu's capital to Marquis Charles Cornwallis, the former Governor-General of India. These included the 'war turban', one of the most remarkable objects taken from the city's vast riches.

It is a work of exceptionally high-quality craftsmanship, the main part of which is a leather-covered wicker frame, overlaid with quilted green silk, and lined with green silk velvet.

Around the main body of the helmet is wrapped a green muslin pagri or turban; the ends of this are tie-dyed in pink (perhaps originally red but now faded); the pagri is stiffened with starch. The quilting stitch patterns include bubris - stylised tiger stripes that were used by Tipu as his personal symbol.

Attached to the front of the helmet is a face guard. This should be rather lower than it currently is, so that the wearer of the helmet could look out over it. However, it has become fixed in a high position and the leather tabs that hold it in place are now too fragile for it to be adjusted.

Made of blued steel, and intricately decorated with gold, the guard is in the form of six conjoined bubris. Each point of the guard terminates in a tiger’s head, reflecting Tipu’s deep fascination with that animal, which led to the British nicknaming him ‘the Tiger of Mysore’.

The decoration incorporates verses from the Holy Qu’ran written in Nastaliq, a courtly Persian calligraphic style. The helmet is also said to have been dipped in the holy well of Zum Zum at Mecca in order to render its wearer invincible.​​​​

A Mysorean warrior wearing a similar face guard and helmet, 1792

It is one of several helmets of this type found in Tipu’s palace and armoury, and remarkably one of several that survive in museums and collections in the United Kingdom.

This one has impeccable provenance, having been sent to Lord Cornwallis in 1799, and then passing down through the Cornwallis family until it came to the National Army Museum in 1971.

Cornwallis was an old adversary of Tipu. He had been the Governor-General who led the army which besieged Seringapatam in 1792 during the Third Mysore War (1790-92), and had received Tipu’s sons as surety on the peace treaty that ended that war. This scene is famously depicted in Robert Home’s painting 'The Reception of the Mysorean Hostage Princes by Marquis Cornwallis, 26 February 1792'.

At the centre of the painting, wearing dark blue cavalry uniform and positioned just behind Cornwallis as he receives the hand of Prince Mohin-ud-din, stands Colonel John Floyd, who commanded the cavalry in Cornwallis’s 1790-92 campaigns against Tipu.

Floyd, by then a major-general, was again the cavalry commander in 1799, when Tipu was defeated and killed. But perhaps most importantly of all, he was the chairman of the Committee of Prize that voted to send the ‘war turban’ to Cornwallis. It was very likely his decision to honour his former commander by sending him some of the very finest items from Tipu’s palace.

'The Reception of the Mysorean Hostage Princes by Marquis Cornwallis', 26 February 1792 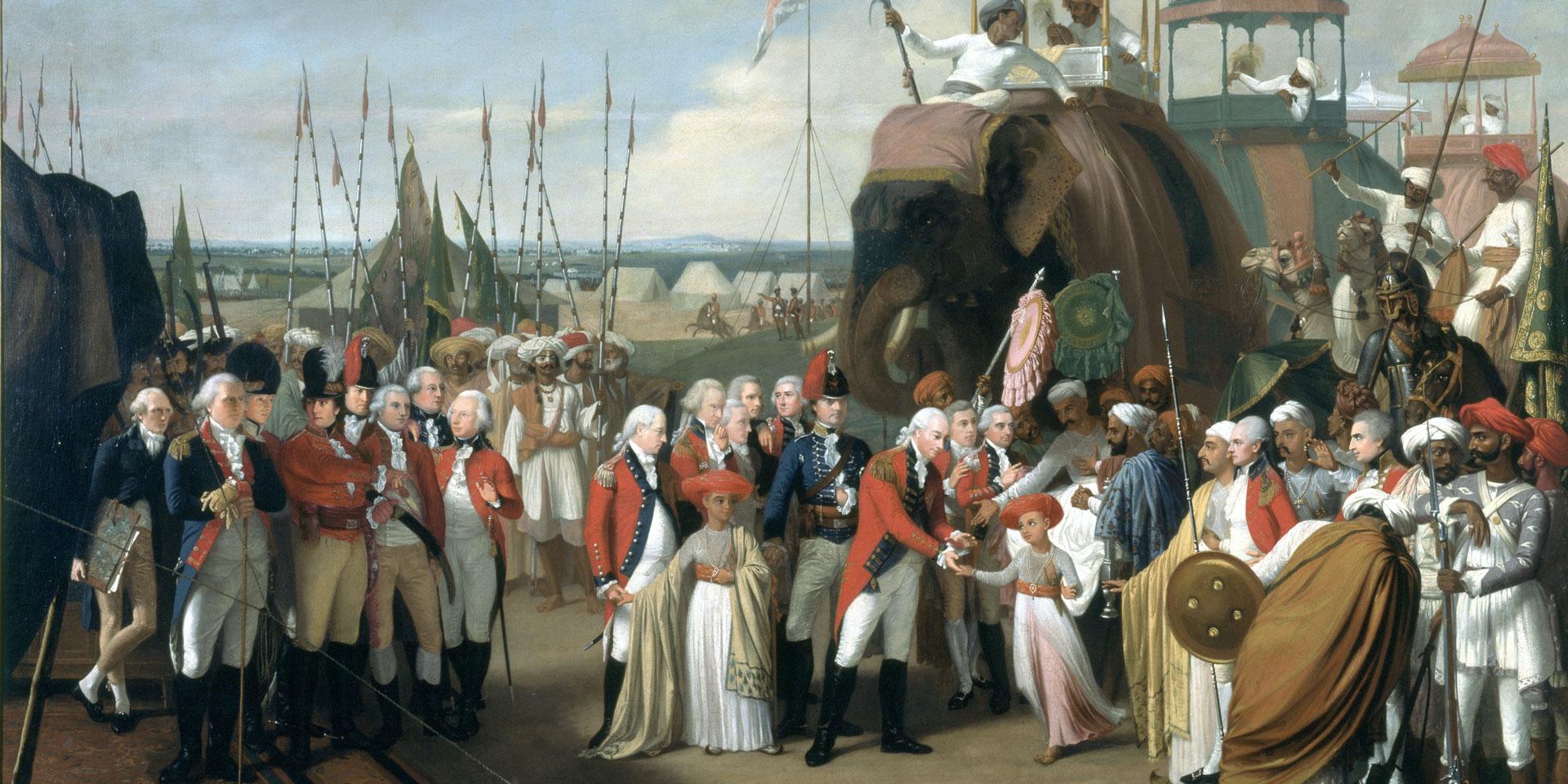 'The Reception of the Mysorean Hostage Princes by Marquis Cornwallis', 26 February 1792

When British forces entered Seringapatam in 1799, they were astonished by Tipu’s wealth and the objects they found. The Prize Committee reported that there was ‘everything that power could command or money could purchase’.

His whole library of more than 2,000 books and manuscripts was sent back to the Court of Directors of the East India Company. Jewels, gold and exquisite items of craftsmanship were officially sold by the Prize Committee, with the proceeds forming the basis of the reward for the victors.

Each soldier received a share allotted according to his rank. The largest single allocation went to the commander-in-chief, the second largest to Floyd as second-in-command of the army, and the smallest portion to the Indian sepoys.

Cornwallis also received a beautiful jewelled dagger that belonged to Tipu. This too is in the National Army Museum's collection, along with several other items from Seringapatam.