The war on glamour

During the Second World War, the Army relied on women to perform essential military roles. But some of the tactics used to recruit members of the newly formed Auxiliary Territorial Service (ATS) proved highly controversial, leading to questions about the 'appropriate' portrayal of women. 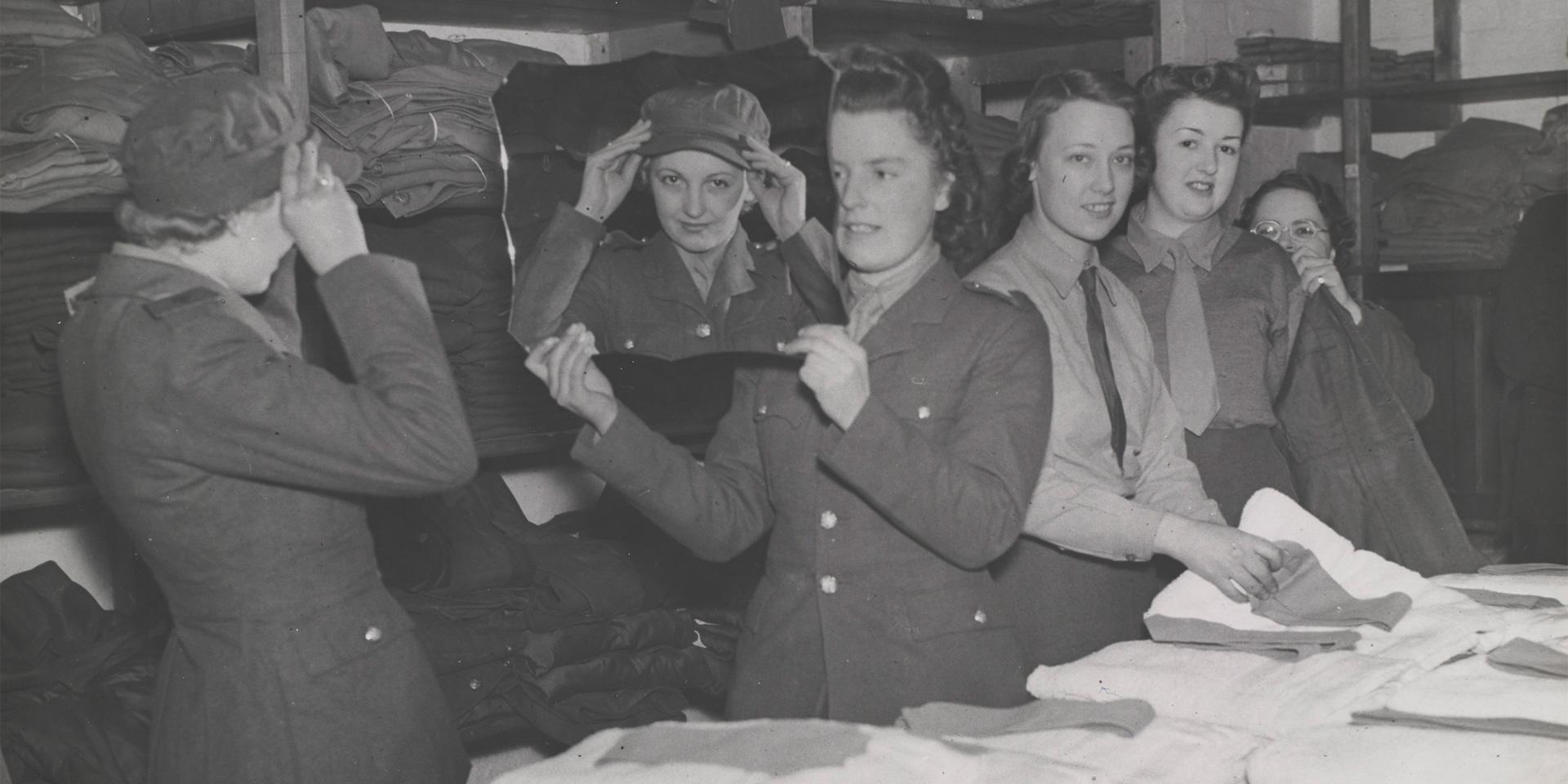 In September 1938, the outbreak of the Second World War (1939-45) seemed inevitable. That month, the Auxiliary Territorial Service (ATS) was created, offering female volunteers the opportunity to undertake non-combat duties and to play a vital role in the forthcoming war effort.

Although uniformed, ATS recruits were not considered part of the armed forces until the introduction of the 'Defence (Women's Forces) Regulations' in April 1941. Following the National Service Act later that year, the unit expanded. And by 1943, there were about 206,000 women serving in it.

However, in the early years, before conscription was introduced, the ATS struggled to attract new recruits. Initially restricted to clerical, transport and other routine support roles, its work was considered more menial than the tasks performed by the Women’s Royal Naval Service (WRNS) or the Women’s Auxiliary Air Force (WAAF).

But, as the war progressed, the women of the ATS proved their worth in more demanding jobs, many serving in anti-aircraft searchlight units and batteries on the Home Front.

ATS uniforms were also regarded as less appealing to young women than the navy blue of the WRNS and the slate blue of the WAAF. The full-panel khaki skirt and belted tunic over a lighter khaki shirt, khaki lace-up brown service shoes and thick beige lisle stockings were not seen as particularly flattering.

ATS forage cap - not regarded as a flattering item

In 1941, the Army introduced a new field service forage cap in an attempt to help boost recruitment. It was chocolate brown with a beech crown and green piping. Although this was a private purchase item, costing ten shillings for other ranks or £2 for an officer, the new cap proved very popular.

'The ATS appears to have been from the beginning the drab and unglamorous Service, the legion of Cinderellas, domestic workers of low degree among whom one expected, and got, a low degree of morality. Even the uniform seems to have helped this idea, men contemptuously calling them "female Tommies" and "scum of the earth".' Wartime Social Survey, October 1941

Another challenge confronting the ATS was that women's involvement in the military went against the domestic ideals of the time. Parliamentary and press reports revealed that many men did not approve of their wives undertaking war work. There were even suggestions that members of the ATS might have loose morals.

A radio broadcast in 1941 by an ATS officer advising girls on how to apply cosmetics was seen as ‘confirming men in their low opinion of the ATS moral tone’. Such concerns led to the inspection of 123 women’s camps that same year.

'I think it's quite out of place to smear yourselves with rouge and paint when you're on duty. I don't suppose there's anything against using cosmetics in moderation, but when ATS girls in uniform appear with lips looking like over-ripe tomatoes, you ought to hear the men's remarks.' Letter from an army officer printed in 'The Girls' Own Paper', August 1945

However, the ATS was carrying out valuable work and more recruits were needed. In 1941, designer Abram Games created one of his most iconic images. His recruitment poster showed a glamorous woman in profile, wearing the new ATS cap, above a simple message: ‘Join the ATS’.

Nicknamed the 'blonde bombshell', Games's ATS poster proved very successful. A newspaper cutting in the collection of the Games family shows women queuing to join up alongside it.

But, despite its effectiveness, the poster caused quite a stir. A heated parliamentary debate ensued, in which Conservative MP and feminist Thelma Cazalet-Keir objected to the soldier's lipstick.

'Our girls should be attracted into the Army through patriotism and not glamour,' she argued. 'It is not the kind of poster that would encourage mothers to send their girls into the Auxiliary Territorial Service.'

Ernest Bevin, Minister for Labour and National Service, gave a more balanced response, stating that the poster had 'evoked commendation and criticism in about equal proportions'.

Captain John McEwen MP, however, was firmly in favour of Games's approach. 'I might presume that the objection taken was that it portrayed a lady in the uniform of the ATS who would, in modern jargon, be described as glamorous,' he commented. 'The glamorous theme is apparently no use; that is banned, it is not allowed. Why, that is the one appeal which would have hope of bringing in a great many women.'

Abram Games’s posters were used across the country at recruitment offices and rallies.

A three-week debate ran in 'The Times' in which the art critic Eric Newton wrote, 'At present, glamour is a little indecent and the ATS girl gave the authorities a slight shock. In spite of her serious expression she ought not (said her critics) be quite so jaunty. Her hair was too fresh from the beauty parlour.'

Jean Knox, who had recently been appointed Director of the ATS, complained that it looked like a lipstick advertisement.

Many male journalists were keen for the poster to be retained. However, it was soon withdrawn and most of the 10,000 copies were destroyed. One rare, surviving copy recently sold for £9,000.

'Whilst Hitler uses time with deadly skill, Parliament insists on wasting it. Why did Bevin give way to Cazalet? What is so very wrong with glamour? If Bevin wants 140,000 ATS recruits, how is he going to get them?' The Star, 24 October 1941

Withdrawal of the 'Glamour Girl'

The 'blonde bombshell' was replaced by a new poster. (The name of the designer was not recorded.) Games described its subject - Private Mary Catherine Roberts, a teleprinter operator - as 'marching along patriotically with arms swinging in the best army fashion'.

100,000 copies were printed and posted on billboards across the country. A headline in the 'Sunday Express' simply stated: 'Private Mary – In: Glamour Girl – Out'.

'You are wanted too! Join the ATS', recruiting poster, c1941

ATS soldier posing in front of a recruting poster, c1941

Abram Games went on to produce more recruitment posters for the ATS. In 1942, he designed one showing a soldier in a steel helmet. It is thought that he used the same model as in his previous poster, but disguised her under the hat and coat with its upturned collar.

Eric Newton described the girl as 'slightly Russianised'. But the 'Advertiser's Weekly' described her as 'fresh and smiling... looking upwards with a gaze of eager enthusiasm'.

A final effort, designed by Games in January 1944, was criticised for its subject looking too much like an 'English rose'.

The 'blonde bombshell' poster remains one of the most enduring images of the ATS. And, according to women who served in the unit, such as Betty Webb MBE, it was very popular with recruits.

Despite the questions it raised around the public perception of women in military roles, any lingering doubts about the prestige of the ATS were put to rest in February 1945, when Princess Elizabeth (now Queen Elizabeth II) joined the force.

'I cannot find adequate words to express the effect it has had on the morale of the Service... no greater inspiration could have been given to us all.' Letter from Leslie Whateley CBE, Director of the ATS, to Lady Delia Peel, Lady-in-Waiting to Her Majesty The Queen, 8 March 1945

Letter from Leslie Whateley CBE, Director of the ATS, to Lady Delia Peel, Lady-in-Waiting to Her Majesty The Queen, 8 March 1945