During the Second World War (1939-45), British designer Abram Games produced a series of posters for the Army Bureau of Current Affairs (ABCA). These aimed to remind soldiers what they were fighting for, while also offering a glimpse of the improved post-war society they could aspire to. 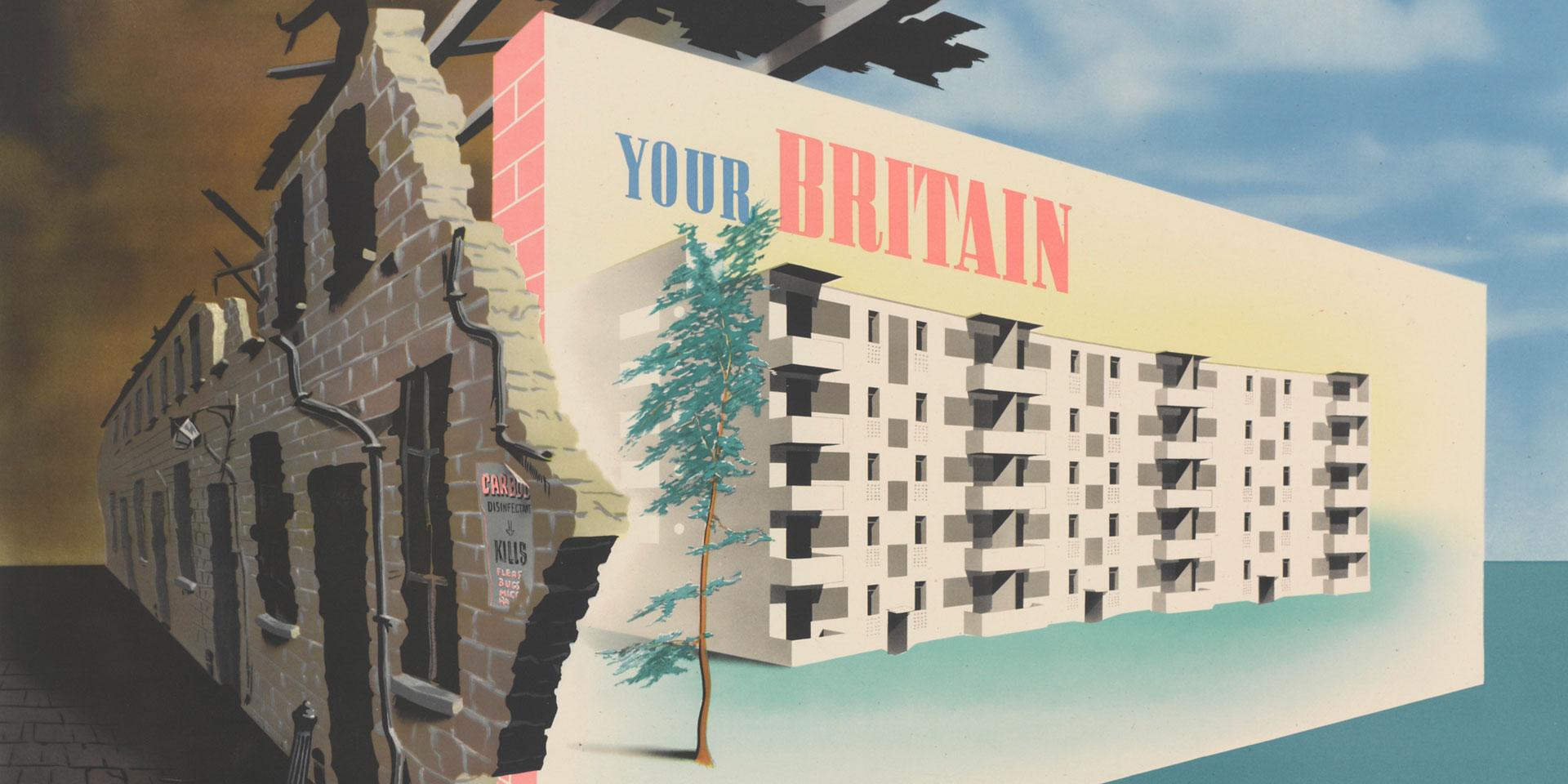 The changing purpose of posters

Prior to the Second World War, poster design was primarily geared towards selling services and commercial luxury. But when a war for national survival broke out in 1939, the government was quick to harness the persuasive power of the art form.

Posters had been an essential means of inspiring patriotism and recruiting men and women during the First World War (1914-18). They continued to serve this purpose during the Second World War, but were now also increasingly relied upon to help instil desirable wartime habits and behaviour in both soldiers and civilians.

‘Your Talk May Kill Your Comrades’ poster by Abram Games, 1942

Abram Games was an established designer and poster artist. After the outbreak of war, he was conscripted as an infantry soldier in The Royal Warwickshire Regiment. But in 1941, the War Office Public Relations Department recruited him to help them communicate their messages.

As 'Official War Poster Artist', Games created over 100 designs. His use of clever symbolic devices and simplified forms resulted in some of the most arresting and powerful posters of the 20th century.

Games had grown up in the poverty-stricken East End of London. He was a committed socialist before the war, but his experiences as a soldier - as well as the turbulent politics of the time - convinced him that the conflict could be ‘a catalyst for achieving the things that Britain needed’.

Some of his most interesting, and controversial, posters sought to stimulate soldiers to strive for a better post-war world.

‘I prefer working for causes and ideas rather than for selling goods.’ Abram Games, 1941

The Army Bureau of Current Affairs (ABCA) was set up by the War Office in 1941 to raise morale and educate British service personnel about current affairs. Considered an integral part of Army training, ABCA's programme of activities - including lectures, film screenings, plays and discussions - aimed to empower soldiers with knowledge.

ABCA also produced regular information booklets on any subjects they considered useful. These formed the basis of many soldiers’ discussions.

‘These men wanted to argue and discuss and they were being encouraged to do it. There was almost universal testimony that discussion was free and felt to be free, that men, NCOs and officers discussed together. I got the impression that there had not been an Army in England which discussed like this one since the famous Puritan Army which produced the Putney Debates and laid the foundation of modern democracy’. AD Lindsay of 'The Times Educational Supplement' describing an ABCA discussion, November 1941

'Your Britain. Fight for It Now'

As well as encouraging debate, ABCA helped promote the idea that British society could be reformed after the war. This aligned closely with Abram Games’s socialist idealism and he subsequently undertook several commissions for them.

His poster series ‘Your Britain. Fight for It Now’ aimed to show soldiers what they were fighting for and what this meant for the future of Britain.

Inspired by improvements in welfare provision that culminated in the Beveridge Report (1942), Games selected Finsbury Health Centre as his first subject. Built for the disadvantaged, it provided clinics, a dental surgery, laundry, lecture theatre and solarium. ‘Nothing is too good for ordinary people,’ proclaimed its left-wing architect, Berthold Lubetkin.

In Games’s poster, the health centre stands as a modern contrast to a murky London slum scene from the past. A small boy suffering from rickets is shown next to crumbling walls graffitied with the slogans ‘disease’ and ‘neglect’. A gravestone in the background forebodes an early death for the youngster.

In 1939, it was estimated that 10 per cent of children in Britain’s industrial areas were afflicted with rickets, a malady caused by malnutrition and a deficiency of vitamin D.

'Your Britain. Fight for It Now’ poster by Abram Games, 1942

In his next poster for the series, Games focused on education. He depicted the modern Impington Village College, which had opened in 1939, surrounded by the debris of an old school. Impington was designed by Walter Gropius, founder of the Bauhaus School of Architecture, and his partner Maxwell Fry.

Games contrasted the old style of education - dark rooms, broken black boards and shoddy desks - with a new school offering light, airy and modern facilities. The ideal of a quality education for all grew during the war, culminating in the Education Act of 1944.

'Your Britain. Fight for It Now’ poster by Abram Games, 1942

Games contrasted this modernist vision with the bombed out ruins of Victorian terraces. During the war, around 1.4 million people were bombed out of their homes in London alone. This meant that one in six people in the capital had nowhere to live.

Providing new homes was a priority for the wartime coalition government and also one of the biggest tasks it faced once the conflict ended. At ABCA, there was a determination that any new buildings should be vastly superior to the pre-war slums where many had lived.

The British prime minister, Winston Churchill, described these posters as a ‘disgraceful libel on the conditions prevailing in Great Britain before the war... It is a very wrong thing that the War Office should be responsible for such exaggerated and distorted propaganda. The soldiers know their homes are not like that.’

In many ways, both Games and the staff of ABCA were symptomatic of a wider trend within the Army. Many officers supported these kinds of changes, whether by working for ABCA, the hugely expanded Army Education Corps or other official bodies like the Army Education Scheme (AES), or by educating their men at regimental level.

Games produced the poster below in 1943 for the Army Education Scheme. Entitled ‘Education New Knowledge New Worlds New Pleasures’, it reflects the prevailing optimism that learning would open up all kinds of new possibilities for soldiers.

During the Second World War, popular opinion was firmly behind the Beveridge Report and the creation of a welfare state. Many in the Army recognised that to get soldiers' support they had to go beyond the traditional appeals to king and country.

The shared experience of war had demonstrated that the state could successfully intervene and improve peoples’ lives, whether in health, housing or education. It was also able to plan the economy and foster the conditions for full employment.

ABCA, Games and others presented soldiers with an optimistic vision of the future of Britain based upon this new interventionist role for the state.

'Officers must provide creative ideas from which a positive faith can be generated. To
get the best out of men it is not enough to tell them that they must be ready to die in the last ditch. They must be given a new vision of the future and a new hope.' Military theorist Captain Basil Liddell-Hart, 1940

In doing so, they were tapping into a popular consciousness that recalled the bitter aftermath of the First World War (1914-18).

Despite the Lloyd George government’s promise of a 'land fit for heroes', many ex-soldiers had suffered during the 1921 economic slump. Unemployment increased and an ambitious programme of post-war reconstruction was cancelled. Many soldiers in the 1940s were adamant that the outcome of their war had to be different.

Games’s posters for the AES aimed to confront these earlier failures to support returning servicemen. The AES offered careers guidance and training to help prepare soldiers for the transition to civilian life. They were also given information on how to find employment after demobilisation.

Civil Resettlement Units assisted soldiers' re-integration into society by offering to help them, their families and their communities adjust to having them back.

ABCA and the AES also aimed to mobilise soldiers to be responsible citizens, ready to build a new society. Through his posters, Games was asking soldiers what role they would play in post-war reconstruction.

'Get in Shape for Civvy Street Civil Resettlement Units' poster, 1945

‘Serve as a Soldier. Vote as a Citizen’

This idea of civic responsibility was also evident in ABCA's encouraging soldiers to take part in the political process.

Games’s poster ‘Serve as a Soldier. Vote as a Citizen’ stated: ‘It is your right and duty as a responsible citizen of a great democracy to get on to the Electoral Register so as to be able to record your vote at the next election. You are doing your share as a soldier - play your part as a citizen.’

'Serve as a Soldier. Vote as a Citizen' poster by Abram Games, 1944

Churchill was suspicious of ABCA, many of whose lecturers were left-wing. He accused it of political bias and criticised it for being a waste of valuable military time and money.

In 1943, his government launched an enquiry into both ABCA and Army education generally. But Sir John Anderson, Lord President of the Council, found in favour of ABCA, concluding that it was not a political organisation and that it should continue its work. He also determined that Army education was generally unbiased.

'The forces vote… had been virtually won over by the left-wing influence of the Army Bureau of Current Affairs.' Conservative politician Rab Butler, 1971

ABCA was also accused by Conservative politicians of indoctrinating soldiers to support the Labour Party. General Sir Ronald Adam, the Adjutant General, who had overall responsibility for the bureau, denied these claims.

While it is true that the Labour vote in the 1945 general election was slightly higher among service personnel than civilians, it is unlikely that this was solely down to the work of ABCA.

The Army vote in July 1945 largely reflected trends in wider society. Winston Churchill was hugely respected during the war, but many were unconvinced that he was the right man to build the peace. As Games himself stated: ‘Churchill may have been a great wartime leader, but he never visited a slum.’

Clement Atlee’s Labour Party won the 1945 election because its manifesto tapped into the desire for a new state-led settlement. The Conservatives, on the other hand, were associated with the pre-war policy of appeasement and the failed economics of the 1930s.

Winston Churchill in Berlin during the Potsdam Conference, 1945

'Everywhere across Italy, on wall newspapers, in bivvies around our tanks, in supply depots, the argument was going on. This curious half-chauvinist, half-anti-fascist, deeply anti-militarist and yet militarily competent army debated the principles out of which the National Health Service came... The Beveridge Plan came to me, in the form of an Army Bureau Current Affairs pamphlet, three or four weeks before the final battle of Cassino.' Historian and Army veteran EP Thompson, 1974