Field Marshal Horatio Herbert Kitchener was famous for colonial victories in the Sudan and South Africa. Later, he helped build Britain’s first mass army and became the face of the First World War when he appeared on the ‘Your Country Needs You’ poster.

Major-General Herbert Kitchener meets the Emir Mahmud after defeating him at Atbara, April 1898 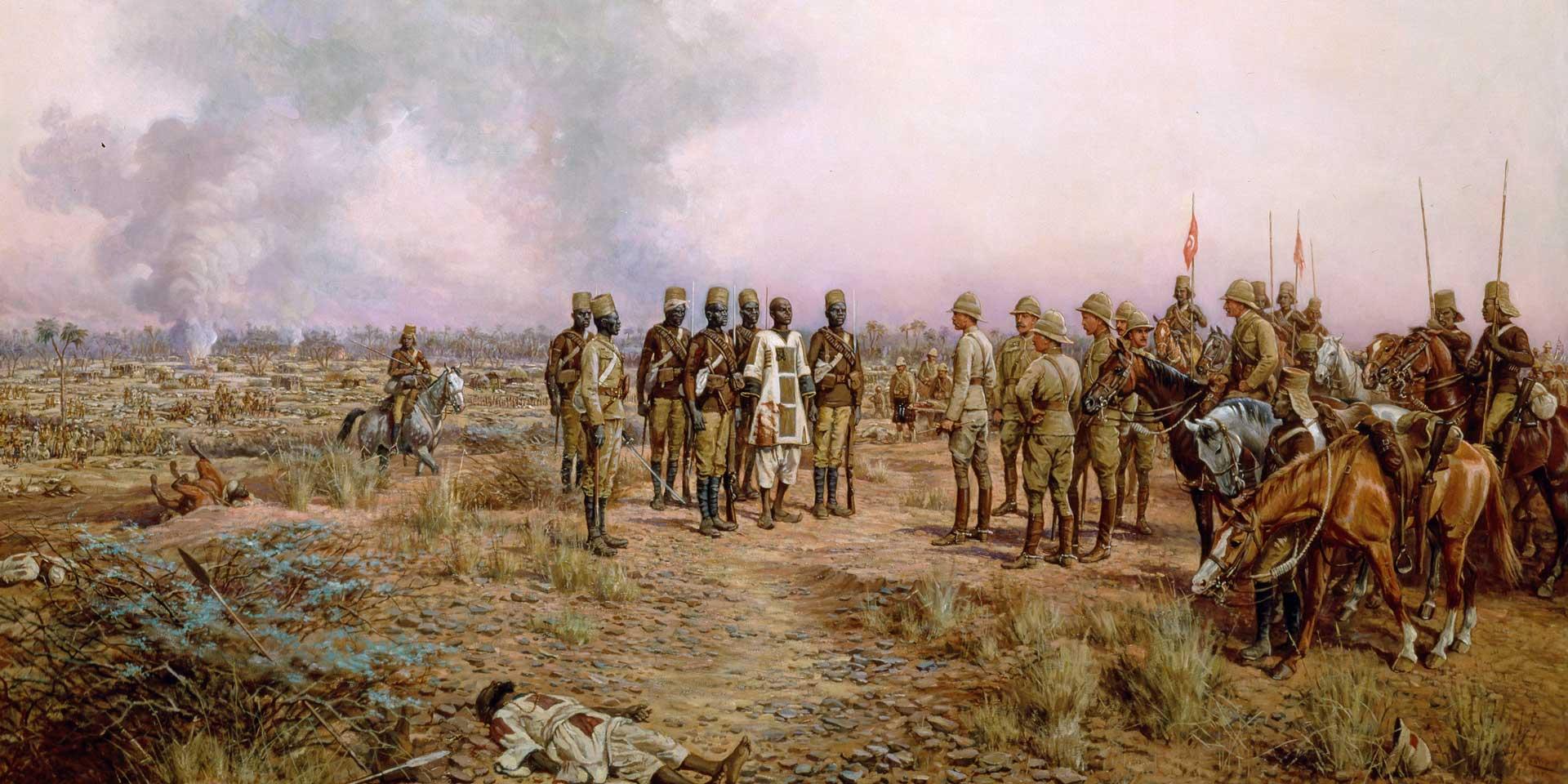 Major-General Herbert Kitchener meets the Emir Mahmud after defeating him at Atbara, April 1898

After serving as a volunteer with a French ambulance in the Franco-Prussian War (1870-71), Kitchener (1850-1916) was commissioned into the Royal Engineers in 1871. Following survey work in Cyprus and Palestine, he was promoted to captain and attached to the Egyptian Army.

During the failed Gordon relief expedition of 1884-85, he served as an aide de camp and was then commandant at Suakin (1886-88). Kitchener was wounded at Handub in January 1888, commanded a brigade from 1889 until 1892 and was then made Sirdar (commander-in-chief) of the Egyptian Army.

‘The Avenger of Gordon, Lord Kitchener of Khartoum', 1899

Promoted to major-general in 1896, Kitchener became a household name during the conquest of the Sudan. He built a railway to ensure logistical support and used river steamers to move his Anglo-Egyptian Army down the Nile. On 2 September 1898, he defeated the Dervishes at Omdurman.

Charge of the 21st Lancers at Omdurman, September 1898 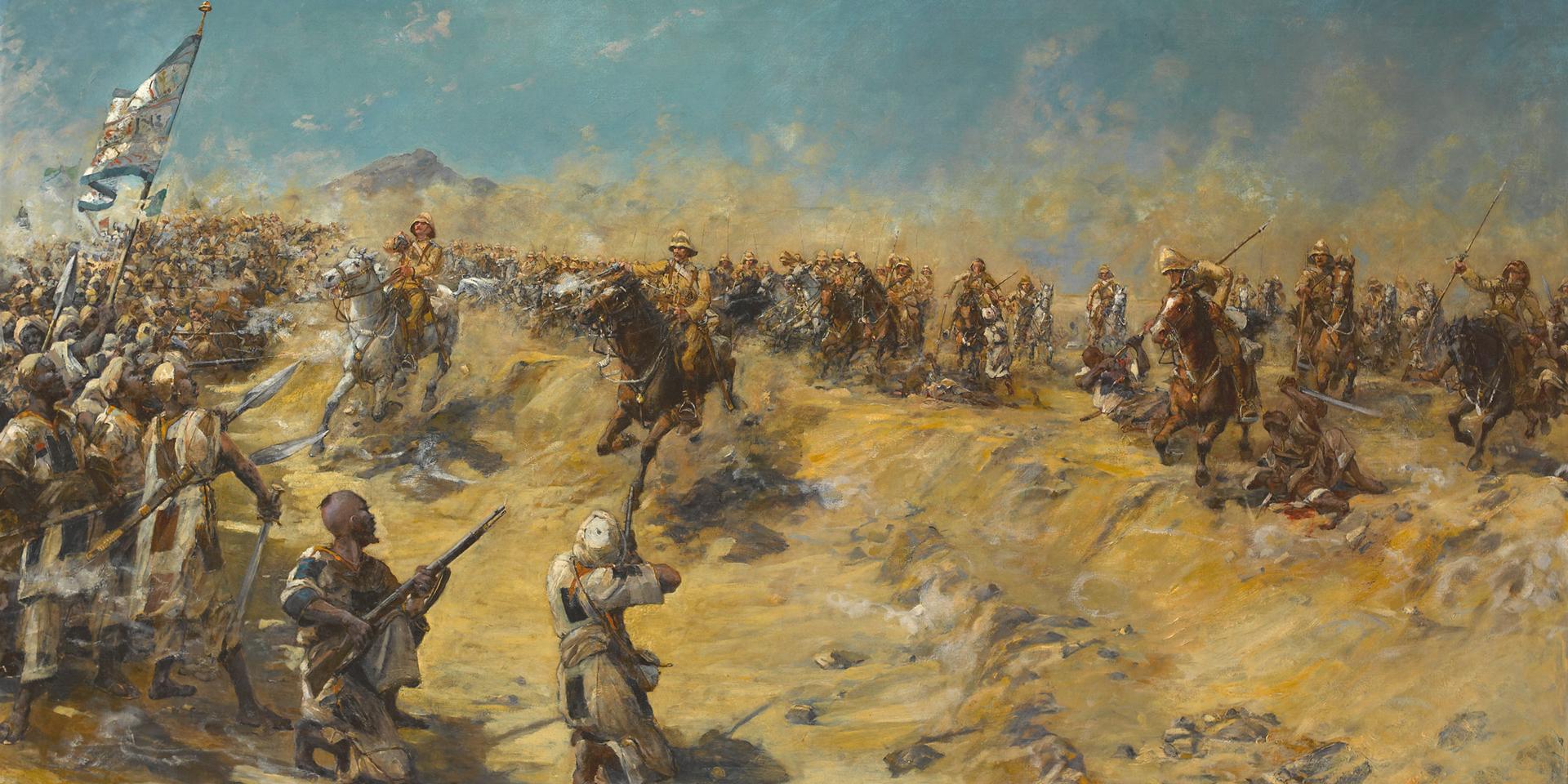 Charge of the 21st Lancers at Omdurman, September 1898

Rewarded with a peerage, Kitchener was made lieutenant-general in 1900 and posted to South Africa as Lord Roberts’s chief of staff. His organisational talents and energy did much to reverse the early defeats of the Boer War (1899-1902) and ensure British victory.

However, while Roberts’s heroic image remained unsullied at the end of the war, blame for its darker aspects - including the use of scorched earth tactics and concentration camps - fell on Kitchener.

Boer women and children in a British concentration camp, 1901

Kitchener was appointed Commander-in-Chief in India in 1902. He re-organised the Indian Army, merging the three Presidency armies into a unified force with enough troops for internal security needs alongside a striking force of nine divisions and five cavalry brigades.

During this period, Kitchener clashed with the Viceroy, Lord Curzon, who resigned his position.

Promoted to field marshal in 1909, Kitchener then turned his attention to reforming the colonial and dominion forces.

General Viscount Kitchener of Khartoum, Commander-in-Chief India, with his staff, 1903

In 1911, he was made British agent in Egypt. His programme of reforms did much to improve the country.

Although he possessed great organisational skills and was a successful colonial campaigner and administrator, Kitchener found it difficult to delegate or work as part of a team. His austere demeanour did nothing to advance his personal popularity with those who served alongside him.

Writing in 1900, Commander Charles Robinson recorded that ‘no harder taskmaster ever lived’, a view that was no doubt shared by Kitchener’s staff.

In August 1914, with retirement beckoning, Kitchener was appointed Secretary of State for War.

Many expected the First World War (1914-18) to be over by Christmas, but Kitchener realised it would be long and on an unprecedented scale. He appealed for volunteers for his ‘New Armies’ and was immortalised on Alfred Leete’s ‘Your Country Needs You’ poster.

For the next year and a half, Kitchener virtually ran the war effort, expanding munitions production and providing the nation with an army capable of meeting its continental commitment.

Kitchener on board HMS ‘Iron Duke’ at Scapa Flow, about one hour before he embarked on HMS ‘Hampshire’, 5 June 1916

Kitchener’s influence declined following the 1915 ‘shell crisis’ and the failed Dardanelles expedition, an operation he had supported in cabinet.

Dispatched to Russia on a fact-finding mission, he drowned on 5 June 1916 when his vessel HMS 'Hampshire' struck a mine off Orkney.