General Sir Edmund Allenby led the Egyptian Expeditionary Force to victory in Palestine and Syria in 1917 and 1918. He successfully pioneered the combined use of infantry, cavalry, tanks, artillery and aeroplanes at the Battle of Megiddo. 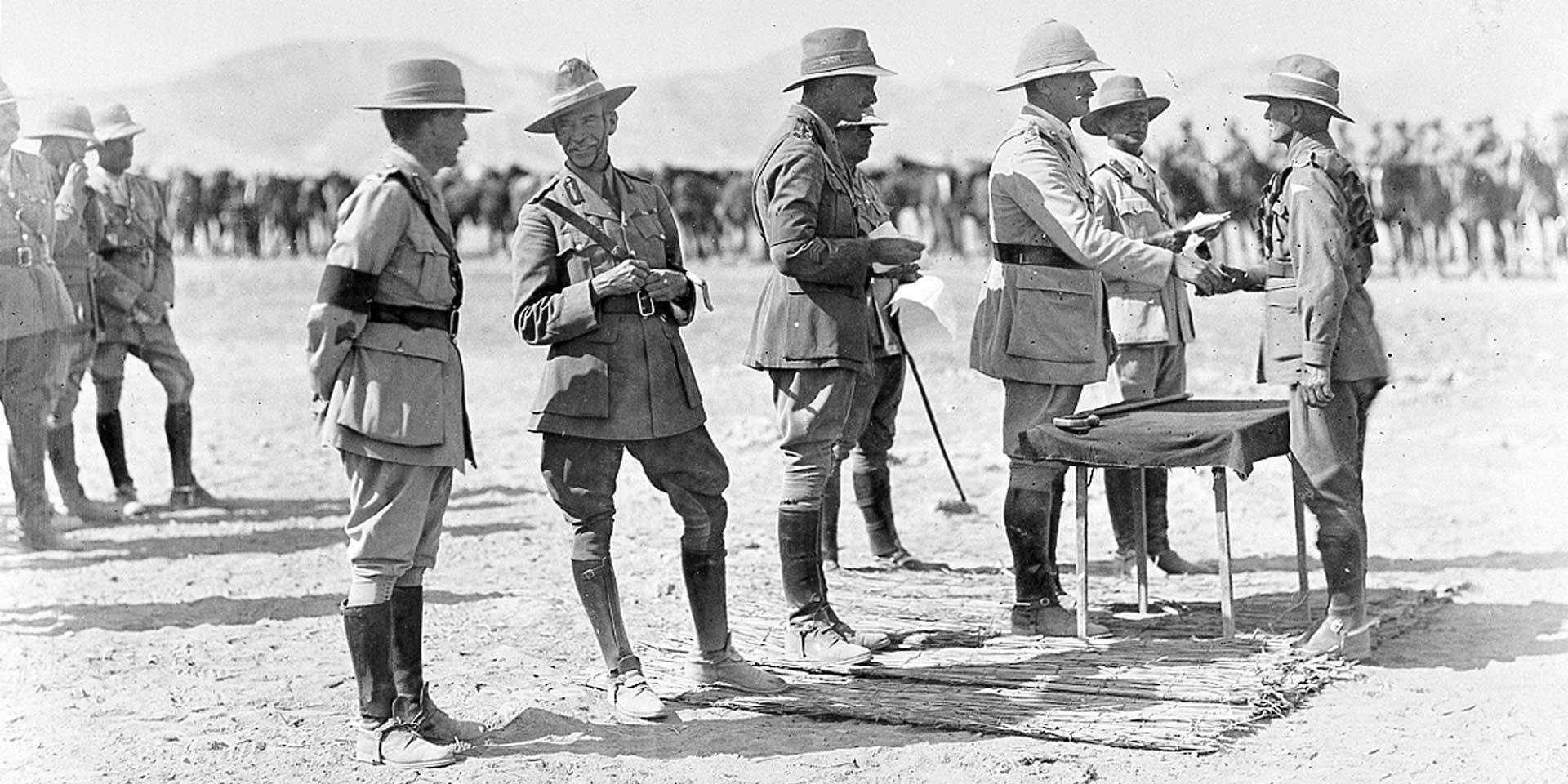 He served in South Africa before returning to Britain to attend Staff College. By 1898 he was a brigade-major with the 3rd Cavalry Brigade.

During the Boer War (1899-1902) he served with General French’s Cavalry Division, earning himself a reputation as a bold and resourceful commander, particularly during the anti-guerrilla operations.

Promoted to brigadier-general, he assumed command of the 4th Cavalry Brigade in 1905. In 1909, he was promoted to major-general and appointed Inspector-General of Cavalry.

During this period he encouraged a re-assessment of the cavalry’s role in modern warfare, steering a path between the traditionalists and those who favoured the use of mounted infantry.

During the First World War (1914-18) Allenby commanded the British Expeditionary Force’s Cavalry Division, winning praise for his leadership at Mons, the Marne, the Aisne and Ypres in 1914.

He later commanded the Cavalry Corps, and in 1915 led the 5th Corps during the Second Battle of Ypres (April-May 1915).

‘A regiment of Allenby's cavalry worn out in critical fighting at Ypres’, 1914

In October 1915 he took charge of the Third Army. Like many other generals, Allenby struggled to come to terms with the new technological and attritional warfare of the trenches.

At Arras (April-May 1917) his forces failed to exploit a breakthrough. He was replaced by General Byng, although his removal and transfer owed much to his feud with Field Marshal Haig, whose judgements he had ceased to trust.

Allenby took command of the Egyptian Expeditionary Force (EEF) in June 1917 and set about improving its organisation, efficiency and discipline. He also embarked on morale-boosting visits to the front, something his predecessor had neglected.

‘He has been everywhere and is the most energetic commander I have yet come across… He is just the kind of man we wanted here.’ General Sir Harry Chauvel describing Allenby’s impact in Palestine, 1917

The British had launched two unsuccessful attacks on Gaza in March and April 1917. But Allenby now adopted a new approach.

To wrong-foot the Turks he made a feint towards the heavily defended Gaza sector, before launching his main attack further east against Beersheba (31 October 1917) on the northern edge of Sinai. Allenby’s British Yeomanry, Australian and Indian cavalry units were particularly successful.

In the trenches prior to the advance on Gaza, 1917

Beersheba's capture  outflanked the Turks, who were forced to retreat. The Third Battle of Gaza (1-2 November) then began with Allenby entering the town on 7 November 1917. This opened the road to Jerusalem, which was captured in December 1917, making him a national hero.

The need to reinforce the Western Front during the German Spring Offensive meant that Allenby lacked the troops necessary to push on. But by September 1918 enough men had arrived to resume the offensive.

At Megiddo, on 19 September 1918, Allenby launched a co-ordinated attack using cavalry, infantry, artillery, armoured vehicles and aircraft to annihilate the Turks in one fell swoop. As the infantry and artillery closed on their positions, his mounted units encircled the enemy, preventing escape.

This victory secured the decisive breakthrough. The EEF quickly advanced, taking Damascus and Aleppo, before the Turks sued for peace in October 1918.

Sword carried by Allenby into Aleppo in December 1918

Allenby was made field marshal in 1919, and remained in the Middle East as High Commissioner for Egypt and Sudan until 1925.

He was often abrupt with his subordinates and a stickler for presentation and discipline. Combined with his physical stature, these traits led people to nickname him ‘The Bull’.

Nevertheless, he can be regarded as one of the most successful commanders of the war, using strategies in Palestine that he developed from his experiences in South Africa and on the Western Front.

His leadership at Megiddo in particular, with its skilful series of manoeuvres and use of aeroplanes, artillery, infantry and cavalry, is considered by some to be a forerunner of the German ‘Blitzkrieg’ tactics of 1939-41.