This corps was formed in 1915 to help meet the demands of trench warfare on the Western Front. It was disbanded in 1922 as part of cost-saving efforts to reduce the Army to peacetime levels. 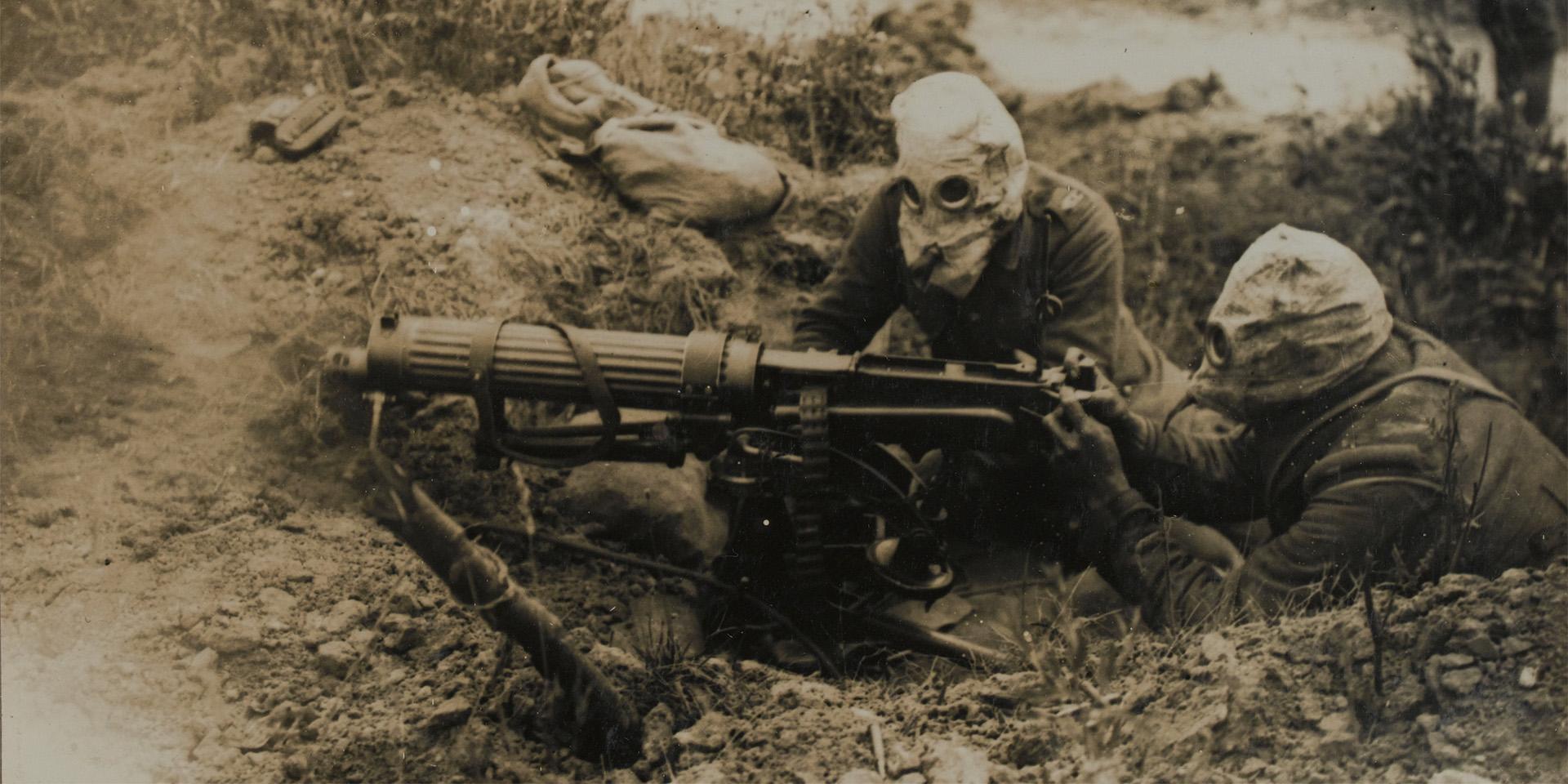 At the outbreak of the First World War (1914-18), the British Army had no specialist machine-gun unit, simply providing two heavy Maxim or Vickers machine guns for each cavalry regiment and infantry battalion.

By November 1914, as the Western Front slowed to a stalemate, this system needed supplementing. That month, a Machine Gun School was set up at Wisques in northern France and a Motor Machine Gun Service (MMGS) of motorcycle-mounted machine guns was established within the Royal Artillery.

The machine gun dominated trench warfare. Within a few months, it became clear that a new specialist unit was needed to further develop machine-gun tactics while also training more men in the weapon's use.

The Machine Gun Corps (MGC) was established in October 1915 by subsuming the battalion Maxim/Vickers machine-gun sections from all infantry regiments. The withdrawn heavy machine guns were replaced by light Lewis machine guns that could be used by all troops.

The withdrawn sections and their guns formed the new MGCs’ Infantry Branch, with a Cavalry Branch also being set up to provide one machine-gun squadron for each brigade of cavalry.

The MGC also absorbed the MMGS and the Royal Navy’s armoured cars to form its third branch, known as the Motor Branch, which initially operated cars and motorcycles.

A Heavy Section was formed within that branch in March 1916, becoming a branch of its own eight months later. This operated the first tanks, before splitting from the MGC in July 1917 to form the Tank Corps (later the Royal Tank Regiment).

The number of machine-gun companies in each division rose from three to four in 1917, grouped into a machine-gun battalion per division early the following year.

Units from the Machine Gun Corps were responsible for offensive and defensive fire support so were always a prime target for enemy fire. Wartime casualties were so heavy (62,000 out of 170,000 officers and men) that the corps was nicknamed the 'suicide club'.

Seven Victoria Crosses were awarded to officers and men from the Corps or attached to it - all in 1917 and 1918, and all but one on the Western Front. The MGC’s personnel included WE Johns, the author of ‘Biggles’, and Kermit Roosevelt, son of American president Theodore Roosevelt.

As well as on the Western Front, the MGC operated in the Middle East, Italy, Salonika and East Africa during the First World War (1914-18).

In 1919, parts of the Corps were sent to serve in the Russian Civil War and the Third Afghan War. It also formed part of the post-war occupation force in Germany and fought on India's North West Frontier.

In 1922, the pre-war system of having a machine-gun platoon or squadron in each infantry battalion or cavalry regiment was revived, at which time the MGC was disbanded.

Find out more about the history and collections of the Machine Gun Corps by visiting The Tank Museum in Bovington.