A veterinary section attending to a wounded mule in Salonika, 1916 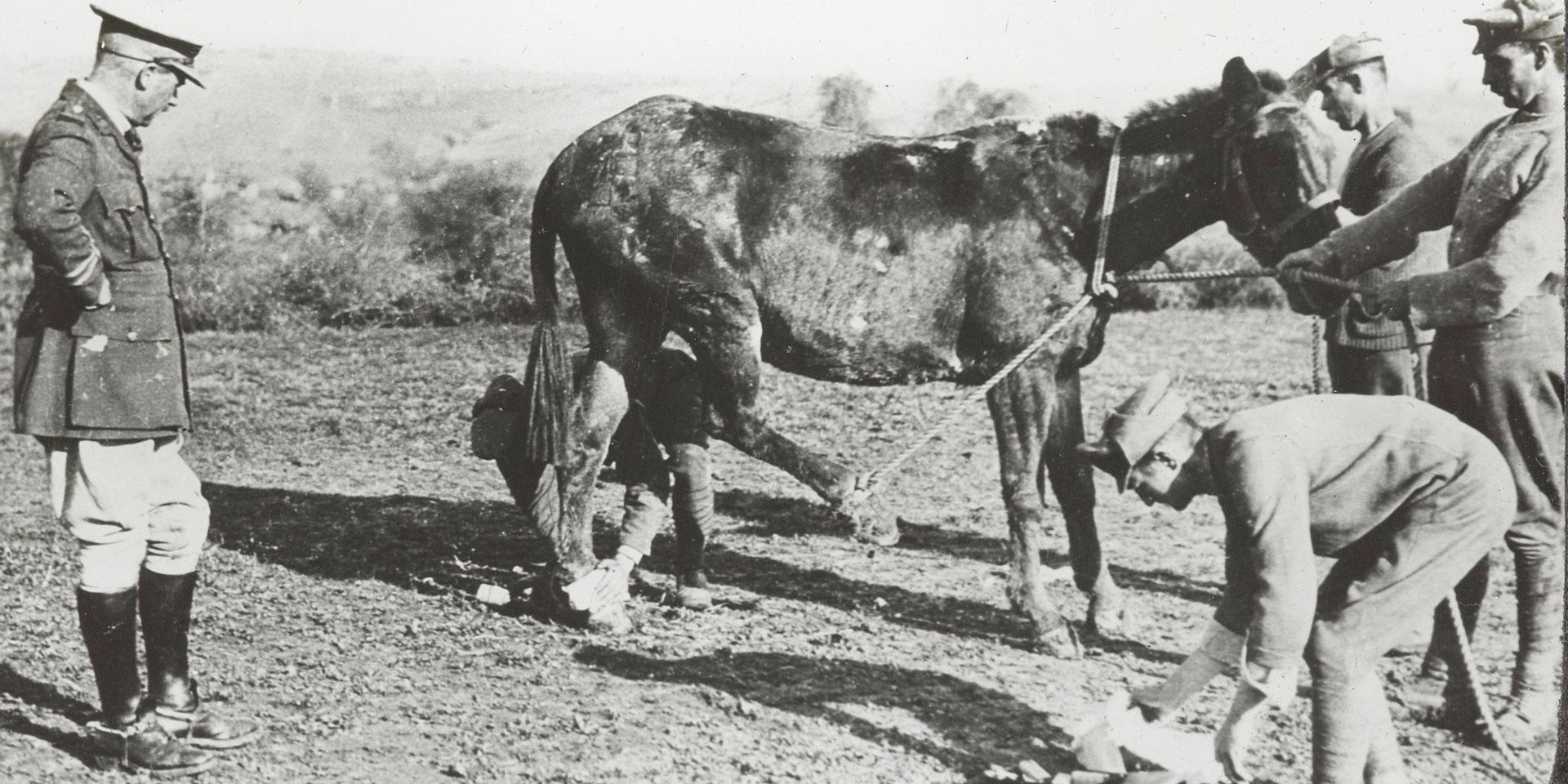 A veterinary section attending to a wounded mule in Salonika, 1916

From 1796, veterinary surgeons were commissioned into cavalry regiments to care for the British Army's horses and mules. Their work had previously been carried out by contracted farriers.

This proved inadequate during the Crimean War (1854-56), where many animals died as a result of poor management and care. Following public protests, the regimental approach was eventually replaced by a centralised Army Veterinary Department in 1881.

In 1898, veterinary provision for most sick and injured animals was transferred to the same depots as the Army's Remount Service. Formed in 1887, the Remount Service was responsible for supplying replacement horses and mules.

This change was carried out against the advice of many Army vets. It soon led to a rapid spread of animal disease during the Boer War (1899-1902) and further public outcry.

A horse float presented to the Army Veterinary Corps by the RSPCA, c1915

During the First World War (1914-18), the AVC tripled its officers, and the number of other ranks grew forty-fold. By 1918, nearly half of all veterinary surgeons in Britain were serving in the corps.

Engaged on the Western Front, at Gallipoli, Salonika, Mesopotamia and Palestine, it treated sick and wounded cavalry, transport and artillery animals.

It also diversified, dealing with horses that had been gassed, setting up four farriery schools, and even treating camels in the Middle East. Around 80 per cent of the animals it treated were returned to duty.

Following the Armistice in 1918, it was granted the 'Royal' prefix in recognition of its service.

The mechanisation of the Army meant that fewer men were needed to care for the declining number of horses. The Royal Army Veterinary Corps (RAVC) was reduced in size in the 1920s and the Army Veterinary School, established at Aldershot in 1880, was closed.

However, horses and mules were still needed in the roughest terrain, where vehicles could not cope. And the Army continued to need vets to care for them in areas like the North-West Frontier of India in the 1930s.

Captain Brian Sinclair of the Royal Army Veterinary Corps was the inspiration behind which famous TV vet?

Professor Noel Fitzpatrick of ‘The Supervet’
Max King of ‘Emmerdale’
Tristan Farnon of ‘All Creatures Great and Small’
Did you know?

Sinclair, who served in India during the Second World War, was a colleague of Alf Wight. Under the pseudonym James Herriot, Wight wrote the 'All Creatures Great and Small' novels, which were later turned into a TV series.

During the Second World War (1939-45), members of the corps served in Palestine, Syria, East Africa, Greece, Italy and Burma. The animals they cared for ranged from horses and mules, in Europe and the Middle East, to elephants and bullocks, in the Far East.

The Remount Service was merged with the RAVC in 1942. That same year, the corps was put in charge of managing the Army's dogs.

Sniffer dogs have also been used to find drugs and other contraband.

'Buster', a search dog awarded the Dickin Medal for gallantry, 2003

Many dogs serve with the RAVC's 1st Military Working Dog Regiment, which was set up in 2010. Its animals and their handlers locate IEDs, help clear routes, buildings and vehicles, and guard and patrol key installations to assist and enhance security.

The majority of equine veterinary work now focuses on ceremonial units, which retain their horses. However, the Army still occasionally uses horses and mules as pack animals in rough terrain, or where stealth is required.

The corps also continues to care for the various regimental mascots in the Army. These include goats and an antelope.

Explore the history and collections of the Royal Army Veterinary Corps by visiting The Museum of Military Medicine at Mytchett in Surrey.