Members of The Royal Horse Guards in camp, 1853 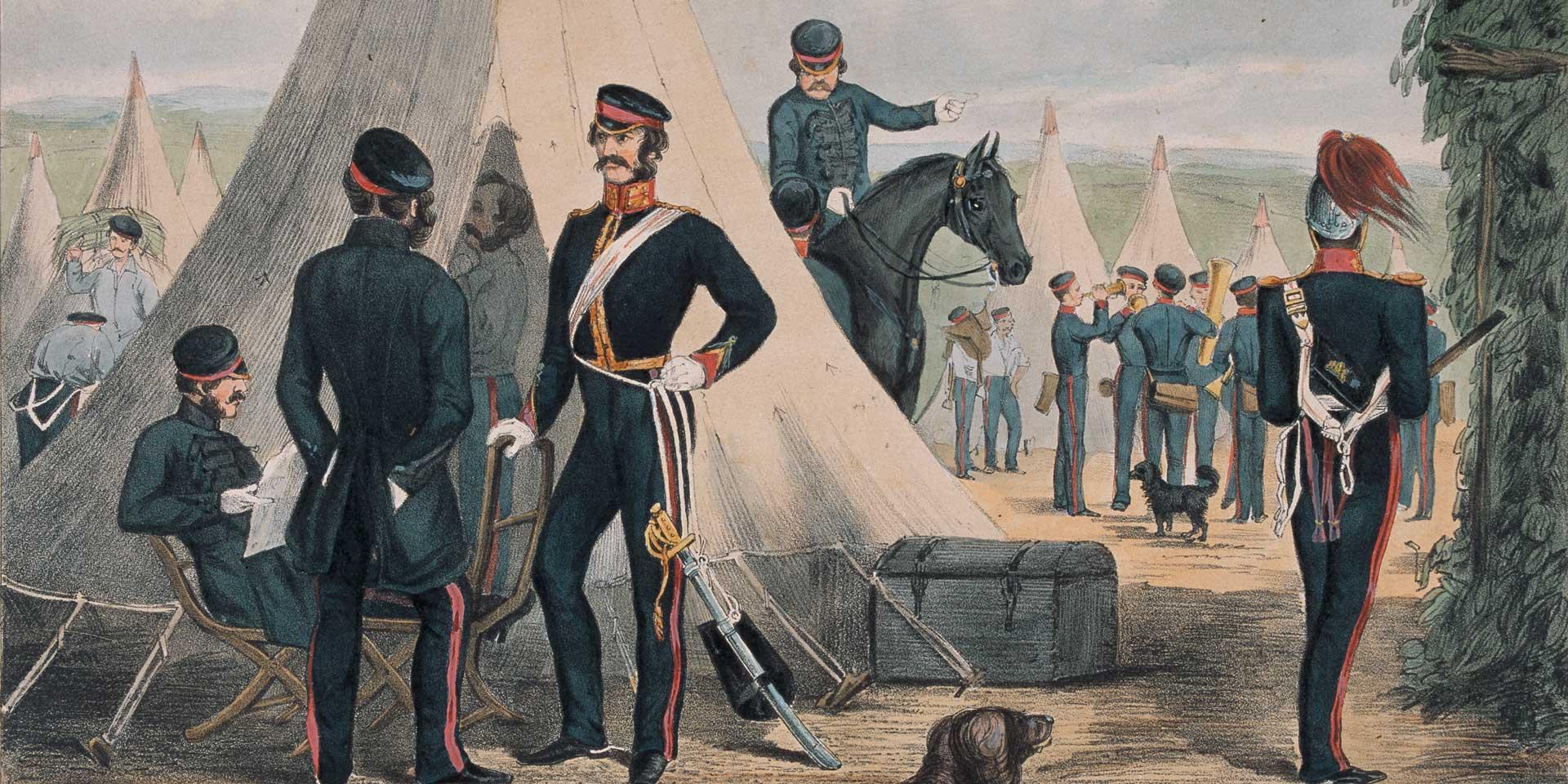 Members of The Royal Horse Guards in camp, 1853

In July 1650, during the Third English Civil War (1649-51), Oliver Cromwell invaded Scotland to defeat Charles, Prince of Wales, and his Scottish Covenanter allies. Within a month, Cromwell had ordered Sir Arthur Haselrig to raise a regiment of cuirassiers (armoured heavy cavalry) in Newcastle-upon-Tyne who should be dressed in dark blue uniforms.

Following Charles’s restoration in 1660, this regiment transferred to royal service. New Royalist officers were appointed and it became the Earl of Oxford’s Regiment in 1661. This placed it second in the cavalry order of precedence to The Life Guards, who had been founded in 1658, but had served the Crown from inception.

Oxford's force, also known as The Royal Regiment of Horse, continued to wear blue uniforms, soon earning the nickname ‘the Blues’ in contrast to the red uniforms of The Life Guards.

In 1685, the regiment helped King James II defeat the Monmouth Rebellion at Sedgemoor. Two years later, it was placed on the Household establishment. But, in 1688, it joined William of Orange's cause, fighting for him at Walcourt (1689) in Flanders, and then in Ireland.

For the first four decades of the 18th century, the regiment was on policing and royal escort duties at home. During the War of the Austrian Succession (1740-48), it fought at Dettingen (1743) and at Fontenoy (1745), where it sustained heavy losses. It was renamed The Royal Horse Guards Blue in 1750.

A trooper of the Royal Horse Guards, 1812

The regiment spent the first decade of the 19th century on public order duties. But, in 1812, it joined the Peninsular War (1808-14), fighting at Vitoria (1813) and several other smaller engagements until returning home in 1814.

The following year, the Royal Horse Guards charged with the Household Brigade at Waterloo, before joining the occupation forces in France until 1816.

A long period of home service followed, during which the regiment was re-titled The Royal Horse Guards (The Blues) in 1877. Five years later, squadrons of the regiment deployed to Egypt as part of the Household Cavalry Composite Regiment (HCCR), fighting at Kassassin and Tel-el-Kebir. Members of the Blues also served with the HCCR's camel detachment in the Sudan during 1885.

The HCCR was revived to provide extra cavalry for the Boer War (1899-1902). There, the Royal Horse Guards took part in the Relief of Kimberley (1900), the Battle of Paardeberg (1900) and several other engagements.

The regiment also provided one battalion for the Guards Machine Gun Regiment in 1918.

A trooper of the Royal Horse Guards in stable dress, 1915

The regiment was stationed in London throughout the inter-war period. But, on the outbreak of the Second World War (1939-45), it was once more placed within the HCCR.

After the war, the regiment served at home and on regular deployments to Germany and Cyprus. It was still in Germany in 1969, when it was amalgamated with The Royal Dragoons (1st Dragoons) to form The Blues and Royal (Royal Horse Guards and 1st Dragoons).

Explore the history and collections of the Royal Horse Guards by visiting the Household Cavalry Museum in London.